Looking to add a touch of the mechanical, ethereal and otherworldly to your productions? Matthew Mann is menaced by the machine in our review of Cyborg… Details Price £139 Distributor Time And Space Contact via website Web – www.timespace.com System Requirements – Kontakt 5.5 or Kontakt Player In the last few years, there’s been a shift […] 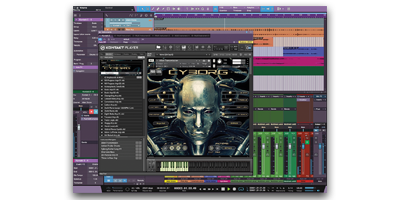 Looking to add a touch of the mechanical, ethereal and otherworldly to your productions? Matthew Mann is menaced by the machine in our review of Cyborg… 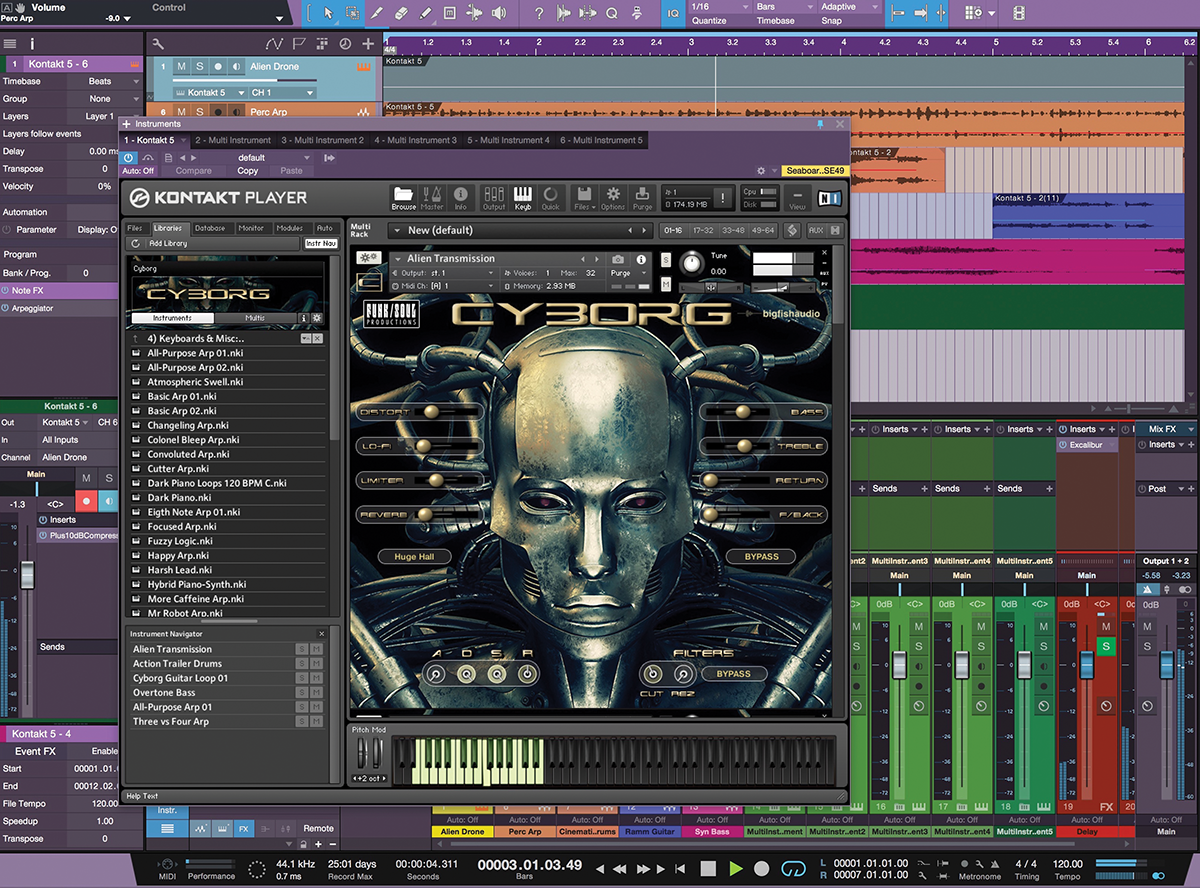 In the last few years, there’s been a shift in what’s expected from a soundtrack composition. Traditionally, a soundtrack was composed with strictly orchestral instruments in mind. Composers like John Carpenter, Hans Zimmer, BT, Giorgio Moroder and others have used electronic instruments in their compositions for film and TV… forever expanding the soundtrack palette.

With this paradigm shift, the composer now has pretty much anything available to use in composing – and several sample-library companies have developed libraries specifically tailored to today’s cinematic composer and the ever-expanding palette for movie music.

One such library is Cyborg from Funk/Soul Productions and Big Fish Audio. This library combines organic and electronic elements into a swirling, evolving, mechanical whirlpool of cinematic sound. So, if you’re a composer of cinematic soundscapes or just looking for an interesting library of sounds to add to your own productions, this may be a good place to start.

Cyborg includes swirling, droning, pulsating patches designed to evoke images of worlds we’ve only dreamt about and depths that we’ve had nightmares about. The sounds are, at times, very rigid and unnatural – at other times, they’re very organic and loose feeling.

This library made me feel uneasy and concerned for my own safety (in a good way). Cyborg is a Kontakt library that requires Kontakt 5 and can even be used with the free Kontakt Player (again, at least version 5). Opening the library presents the user with a splash-screen image that looks like it was ripped straight from the mind of HR Giger… and it is very representative of the sound and feel of this library. There are five folders in total. They are:

Each folder leads you down a dark and disturbing path. Drones & Atmospheres is exactly what it sounds like – dark, swelling, bleeping and brooding. The swirling, glitching, resonating madness of this folder would make an excellent backdrop for your latest musical trip through hell.

Although there’s no key-switching or multi-layered, velocity-switched anarchy going on behind the scenes, the patches are still very good. You’ll only get changes in volume based on playing at different velocities. I would expect a little more in this department with all the possibilities available in Kontakt, but I really can’t complain.

The sounds really are quite good. Drums & Percussion contains several kits and percussive loops. From glitch kits to percussion drowned in filth, these percussive elements and loops add fuel to your soundscape.

The loops are not all tightly locked to a metronome, either. Some are in fact very organic and loose – reminding us that inside this mechanised monster is the beating heart of something that was once human.

Moving on, we have Guitars & Basses, a collection of stringed instruments whose sole purpose is to crush your soul. Metal-guitar patches and loops give you chunky, screaming filler. The basses are so deep, chorus-y and gothic that they would make The Cure’s Robert Smith extremely proud. There are also heavy guitar loops that consist of chugging metal chords and riffs that can add ballsy, distorted rhythm and movement to your undulating compositions.

Keyboards & Misc fills a void that you didn’t even know was missing. This folder contains mournful piano loops, buzzy arps, distorted synth riffs, dark vibes, more ethereal pads and voices, a couple of nasty leads, and sound effects like piano-string scrapes and such. I found use for many of the patches in this folder… especially the arps. One of my favourite things to do while checking out this folder was to stick random MIDI drum parts in and let them play some of the SFX patches. Killer results without even trying! 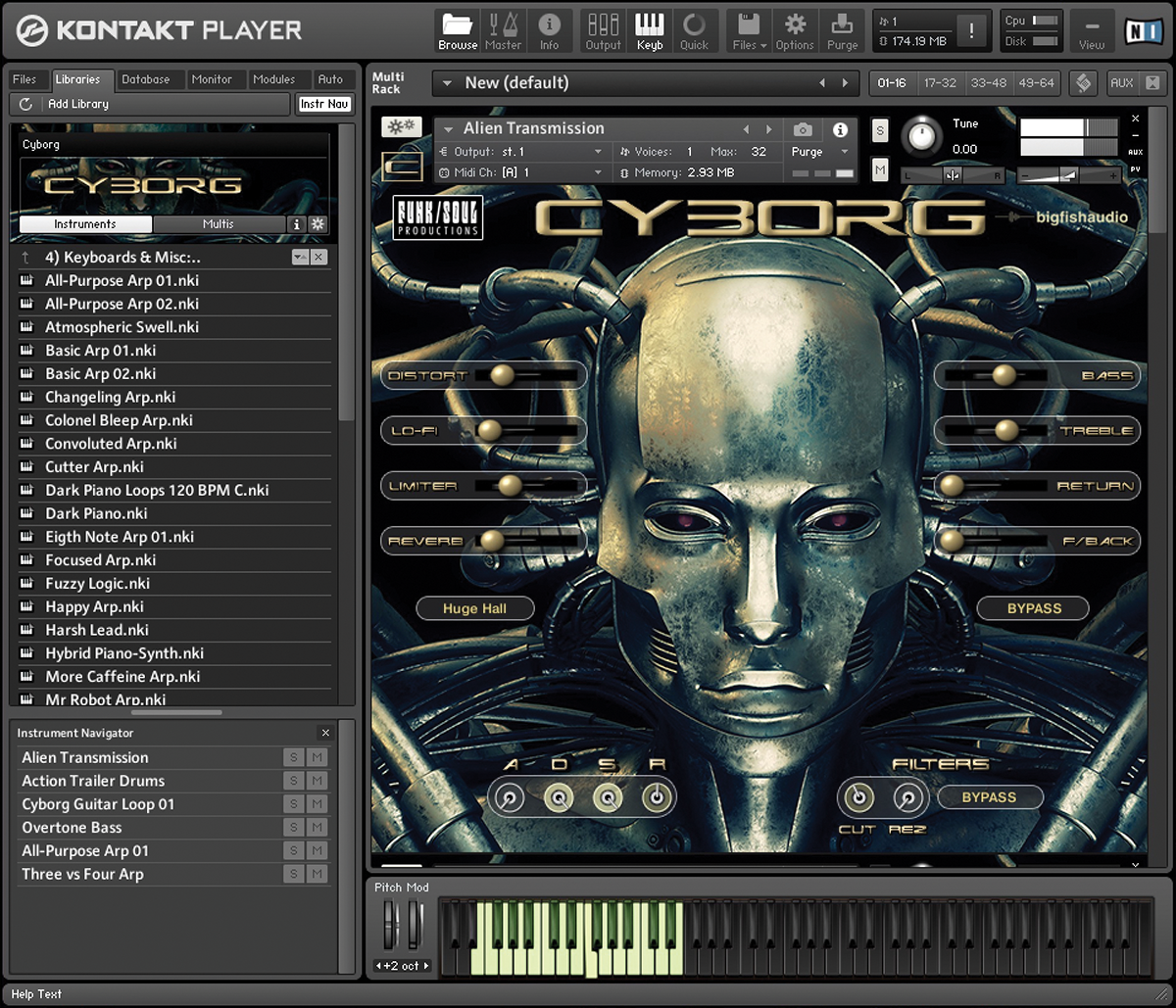 The Face of Darkness

Cyborg’s front panel consists of 12 basic controls. These do not change as you move from one patch to the next, but are standard throughout the library. The first eight controls are basic sliders that give you more or less of their effect.

These consist of: Distort, Lo-Fi, Limiter, and Reverb on the left side and Bass, Treble, Return, and F/Back on the right. These do as you might expect. Distort adds filth to your patch, Lo-Fi adds noisy bit reduction, Limiter makes it loud, and Reverb… well, you know what that is.

There’s even a selector below Reverb giving access to a variety of reverb patches from Compact Room and Metal Chamber to TankVerb and Wood Room. These are simple and good. Bass and Treble provide basic EQ for patches.

Return determines that amount of delay you can add to your track. F/Back is the number of repetitions of that delay. Below the delay is a selector that lets you add different types of delays including 1/4 note, 1/8 note, 1/16 note, dotted and triplet, a doubler, slapback and more.

At the bottom of the interface are the two final control sections. On the left is the ADSR and does what you would expect. On the right is a basic filter with Cut and Rez controls. There’s also a little button that lets you choose the type of filter from 4-pole LPF, 2-pole LPF, 4-pole HPF, 2-pole HPF, Band Pass and Notch. It’s basic, but sounds good.

One thing I couldn’t seem to do with Cyborg was automate parameters… like the filter cutoff. For example, I found that Basic Arp 02 was a great, simple patch with lots of character. Had I been able to automate the filter cutoff on the interface, it would have become an instant Dark Wave bass riff a la Depeche Mode or Cause and Effect.

I don’t know if this was a limitation of the programming in Cyborg, or a limitation in Kontakt, but I have to believe it was the former rather than the latter. Yes, I can add a separate filter on the track and accomplish the same thing, but it would have been nice to add this functionality inside Cyborg.

I really enjoyed digging into the sounds in Cyborg. They’re very good. The loops go from tightly rigid sequences to organic and swirling. I discovered uses for most of the sounds that I normally wouldn’t have thought twice about.

This library really does lend itself to experimentation. The results did wonders on some ‘less than stellar’ tracks that I’d been working on – adding grit, grime and cybernetic excitement and making my tracks much more interesting. It’s not the cheapest sample library out there, but it’s rather unique and just might give you that little something extra you’ve been missing 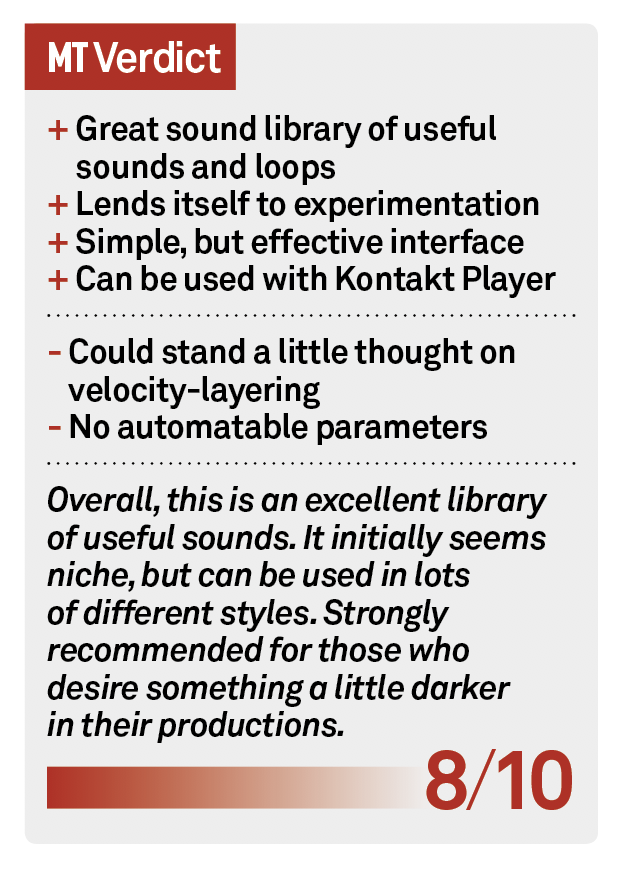