Cubase remains one of the most popular and best known DAWs around, and you can trace its lineage back to the days when people first started making music with computers. Manufacturer: Steinberg Price: Cubase 7 – £488. Upgrade From Cubase 6.5 – £122. Upgrade from Cubase 6 – £162. Cubase Artist 7 – £244. […] 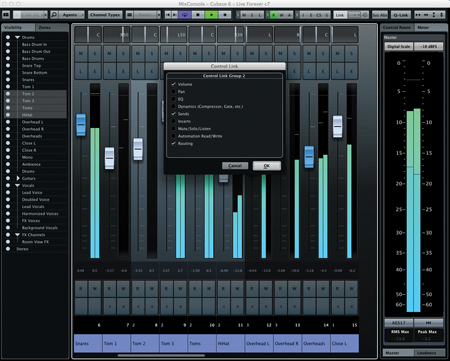 Cubase remains one of the most popular and best known DAWs around, and you can trace its lineage back to the days when people first started making music with computers. 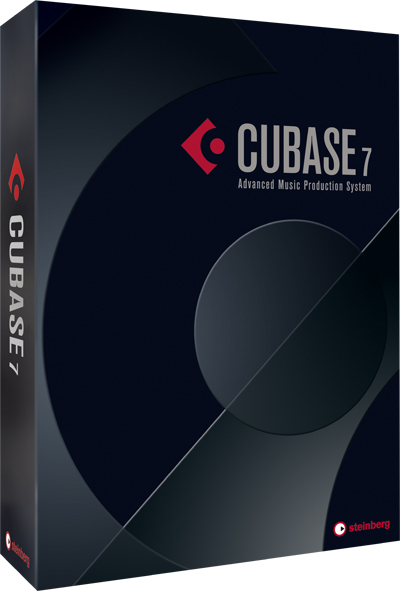 It had a complete rewrite around a decade ago of course, during which all remaining legacy code was ditched, and Steinberg has played a key role in the development of music technology, inventing such cornerstones as the VST format and ASIO system. Any new major release of Cubase therefore generates considerable excitement, and version 7 certainly appears to be one of the most ambitious updates in recent memory.

For anyone unfamiliar with Cubase, it’s a complete audio and MIDI production environment capable of doing more or less anything you might conceivably need to do with sound. The flagship version (which we are looking at here) has unlimited audio and MIDI tracks, is cross-platform (catering for both Windows and OSX in 32- and 64-bit versions) and has a 32-bit floating-point audio engine with support for up to 192kHz sample rates, 5.1 surround and full automatic delay compensation (ADC).

You’ll need a dual-core Intel or AMD (for Windows) processor and 2GB RAM – although, as ever, the more memory and faster the processor you have the better – and Windows 7/8 or Mac OSX 10.7 or 10.8. Authorisation is still via the USB e-licenser. 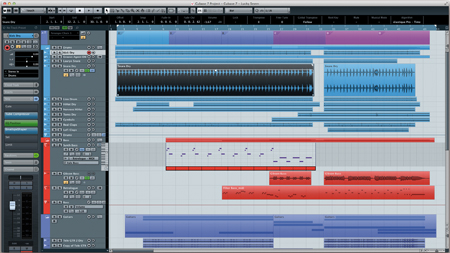 In With The New

There’s a lot that’s new in Cubase 7, and on Steinberg’s website you’ll find videos explaining in great detail the minutiae of all the new features, but here, for the sake of clarity, we’re going to stick to evaluation rather than getting into too much fine detail.

Install and fire up the software and the first noticeable change is that you’re presented with the Steinberg Hub, a window displaying the latest news and updates, links to tutorial videos, forums and downloads as well as your project template browser. This can be switched off in Preferences, but it’s handy for keeping you updated without having to make a special visit to the website.

Open a project and the look of the Project window is relatively unchanged – sleek and muted, though colours and brightness can be changed for many screen elements via Preferences should you wish. The first – and arguably the biggest – change is that the mixer as we knew it has gone, replaced by the all-new MixConsole. This looks so different from the previous mixer that it’s initially a little surprising, not least because things appear at first to have been simplified somewhat. In reality, despite some initial misgivings that the look borrowed too heavily from Sequel, what Steinberg has done with MixConsole is incorporate an awful lot of features into a single window, and in doing so dramatically improve workflow. 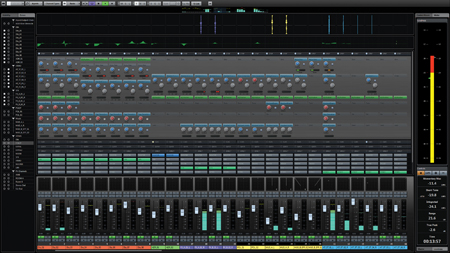 Everything about MixConsole is configurable and you can switch sections on or off easily and resize them manually. The idea is to make it easier to manage large projects, and to this end there are options to let you show or hide specific track types, show only tracks containing data at the cursor position, show only selected tracks and so on. You also get undo of visibility changes and four snapshot slots for convenience. Click on the Search button and there’s a lightning-fast track search function.

The main part of the screen contains a variety of displays and controls, and again the view is configurable. At the top is a channel overview and meter bridge; underneath, an EQ curve display for each channel. Click on any EQ to magnify it and edit it directly, with multiple right-click options available.

Below this you can choose to show Racks, and within this section, show or hide routing, pre, insert, EQ and send effects, as well as a channel strip. Plug-in chooser menus now have instant text-based search and there’s easy drag-and-drop or duplication between slots, copying and pasting of settings and A/B of settings, which is also found in every plug-in window in Cubase 7. FX chain presets are fully supported and you can now create FX Send channels directly from the Send section of MixConsole.

Each track has a channel strip with dedicated effects available (in some instances, multiple types of each). There’s gate, compressor, EQ, envelope shaper, saturation and limiter/maximizer on every channel, with standardised interface controls and sidechain for the compressor and gate.

Moving down, you can now assign images, either preset or your own, to tracks for quick recognition, and there’s a handy notepad available on every track too. At the bottom are faders and panners, and the whole MixConsole can be zoomed easily. The Control Room feature is also now integrated into MixConsole, and makes light work of setting up multiple monitor mixes and talkback. Master monitoring is dramatically improved too, with EBU-compliant loudness meters. The MixConsole can be made full-screen on any monitor, which is a nice touch.

MixConsole is certainly a major change, but there’s much more that’s new. The new Remote Control Editor natively supports a number of control surfaces and offers easy customisation to build your own setups. You get Voxengo’s CurveEQ with its advanced tools for EQ matching – transferring the sound of one audio track to another – and there’s a new global Chord Track that lets you draw chords into a project to trigger MIDI instruments, with advanced options for scale and conversion to regular MIDI parts. These are very versatile and will enable less experienced players to create some complex music. It can even generate music by filling in gaps between chords for you – the Chord Assistant offers automatic chord suggestion with varying levels of complexity. Chords also tie in with the new VariAudio 2.0, which enables you to create harmonies with just a few clicks and tweak the results. These harmonies can even be made to follow the Chord Track. Happily, multiple VariAudio parts can now reside in a single window, which is a great time-saver. 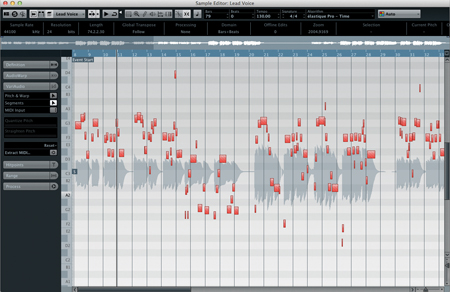 Among the many other arguably less significant enhancements are more instruments for HALion Sonic SE and Groove Agent ONE, plus thousands of MIDI construction loops and some excellent custom-designed channel strip presets. MemZap is a nifty new trick that lets you quickly hop between different zoom levels and there’s also ASIO-Guard, which pre-renders certain tracks to help prevent dropouts (this is especially helpful for working at lower latencies on the Mac platform).

The last really big new feature we would be remiss not mentioning is VST Connect SE, a system for collaborating in real time over the internet, with the other person downloading a free app and the master system controlling recording, mixing and a video stream. It’s an intriguing concept, although as always with such things, the faster your connection is the better the experience is likely to be. 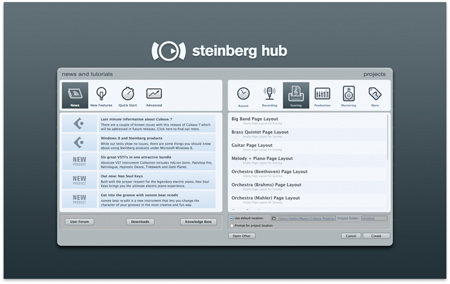 Cubase remains a very powerful DAW and version 7 addresses some key workflow issues that could arise due to the nature of ever-expanding projects.  MixConsole is a really well designed solution to managing sessions and has been put together so that it can be operated from the keyboard in much more depth than you might expect, freeing you somewhat from the mouse. Indeed, everywhere you look there are workflow improvements to be found, from the Channel Settings window for any track to the Control Room. Everything feels nicely tied together, and there’s much less shuffling between windows. Searching for tracks, plug-ins and presets is massively easier than before, and working with MixConsole quickly becomes second nature in everyday use.

The Chord Track is far more powerful than it might at first sound, and offers genuine composition assistance. Combined with the new and more flexible VariAudio 2.0, it makes MIDI and audio work together better than ever before. There’s a greatly simplified Control Room and the clever VST Connect SE system, plus improved ASIO technology to help with latency and better Remote Control support as well as countless smaller improvements. Cubase’s instruments are decent and you get Retrologue and Padshop among others, though it would be nice in this flagship DAW to bundle the full version of HALion and maybe a few of Steinberg’s other specialised VSTs.

Despite that, Cubase 7 is an important upgrade, dramatically improving workflow and increasing the software’s appeal to a more professional audience as well as regular users. Even with the more advanced MixConsole, Cubase still feels zippy, and once you get used to the new workflow you will probably wonder how you ever managed without it.

+ Searching and preset management much improved

+ VariAudio refined and extended in version 2.0

+ Advanced yet easy to use

+ Artist version shares many features but at a lower price

– Throwing in a couple more instruments would be nice

A very solid update to an already great DAW, Cubase 7 dramatically improves workflow and takes the software to a more professional level. A recommended upgrade from any other version – or, indeed, for new users.