TC continues to provide tactile plug-in control with another of its Icons range. This time, we welcome back a classic digital delay from the pre-DAW era. 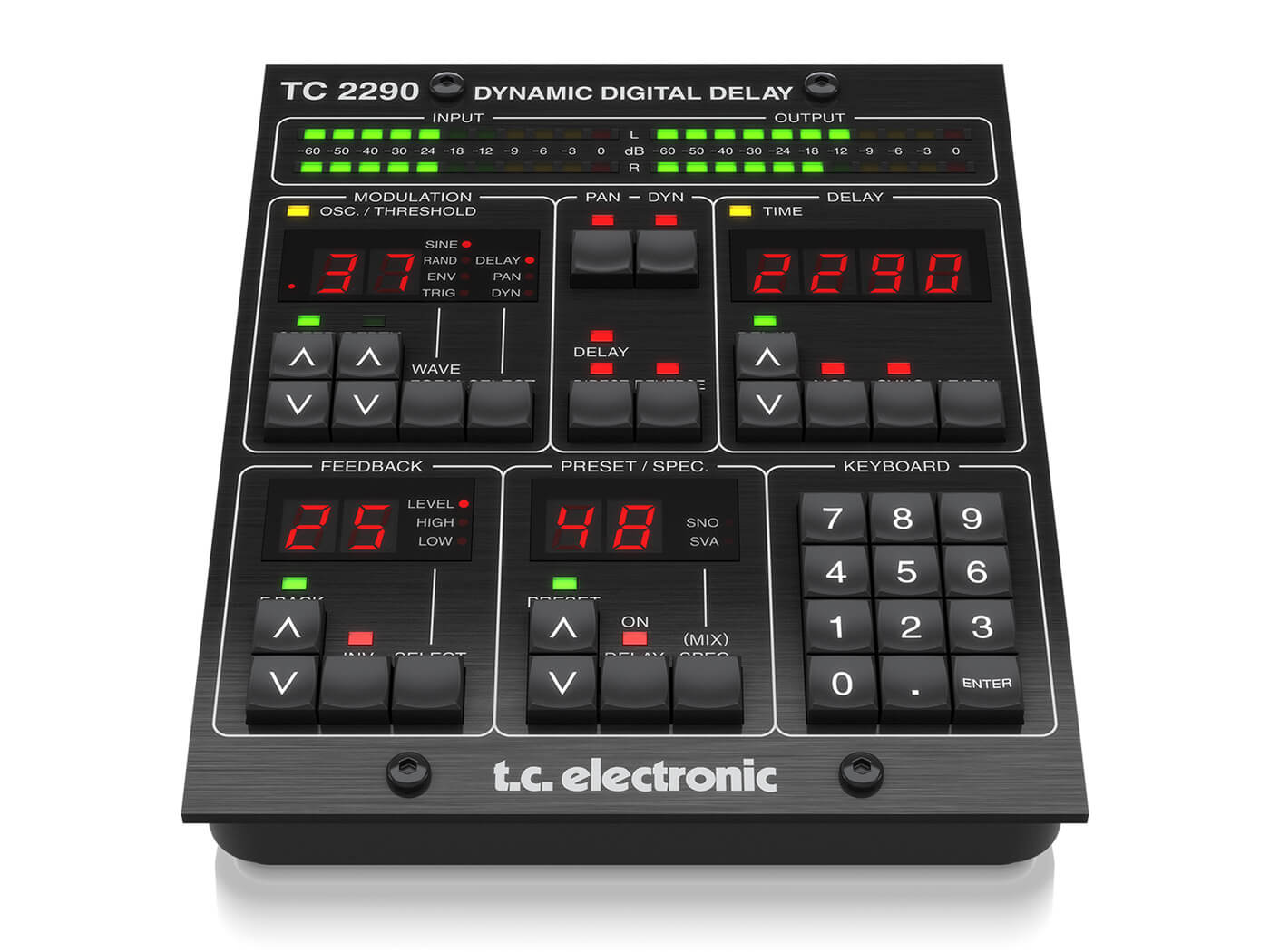 The digital revolution hit studios long before DAWs got in on the act. From the mid 80s until well into the 2000s, most studios were adorned with rack cabinets packed with digital boxes dedicated to performing specific studio tasks: reverbs, delays, SMPTE sync and all the rest of it. And, just as in the analogue age, the pre-DAW digital age gave rise to some legendary bits of studio kit, such as the PCM90 reverb and the TC2290 Dynamic Digital Delay. The latter of these has now been reimagined by the original manufacturer, TC Electronic, as part of its TC Icons range.

As with the DVR250-DT reviewed recently, the TC2290 is a combination of a DAW plug-in for Windows and macOS and a dedicated hardware controller for interacting with the plug-in. Although the hardware component doesn’t act as a licence-control device for the plug-in – the software can be freely downloaded, installed and used on as many computers as you like – it does provide the only means of access to the bulk of the plug-in’s effect parameters (the ‘primary’ parameters, as TC calls them).

Furthermore, the parameters that are accessed from the plug-in window itself – the ‘secondary’ parameters – will be hidden and locked if the hardware unit hasn’t been connected to the computer for over 60 days; the plug-in will continue to process audio, but you won’t be able to call up presets, nor make any adjustments to the settings.

To create the TC2290 model, TC’s engineers measured and analysed the responses of three original TC2290 units taken from different periods in its production lifespan and combined the results into a single definitive model of the TC2290 hardware. Modelling a digital circuit may seem a bit like overkill, given the algorithms that define the actual effect processing could simply be recreated in modern computer code. However, there are still analogue stages involved in digital outboard, principally the audio I/O and AD/DA conversion. This has a significant impact on the sound and character of a device and justifies the effort involved in modelling such a circuit. 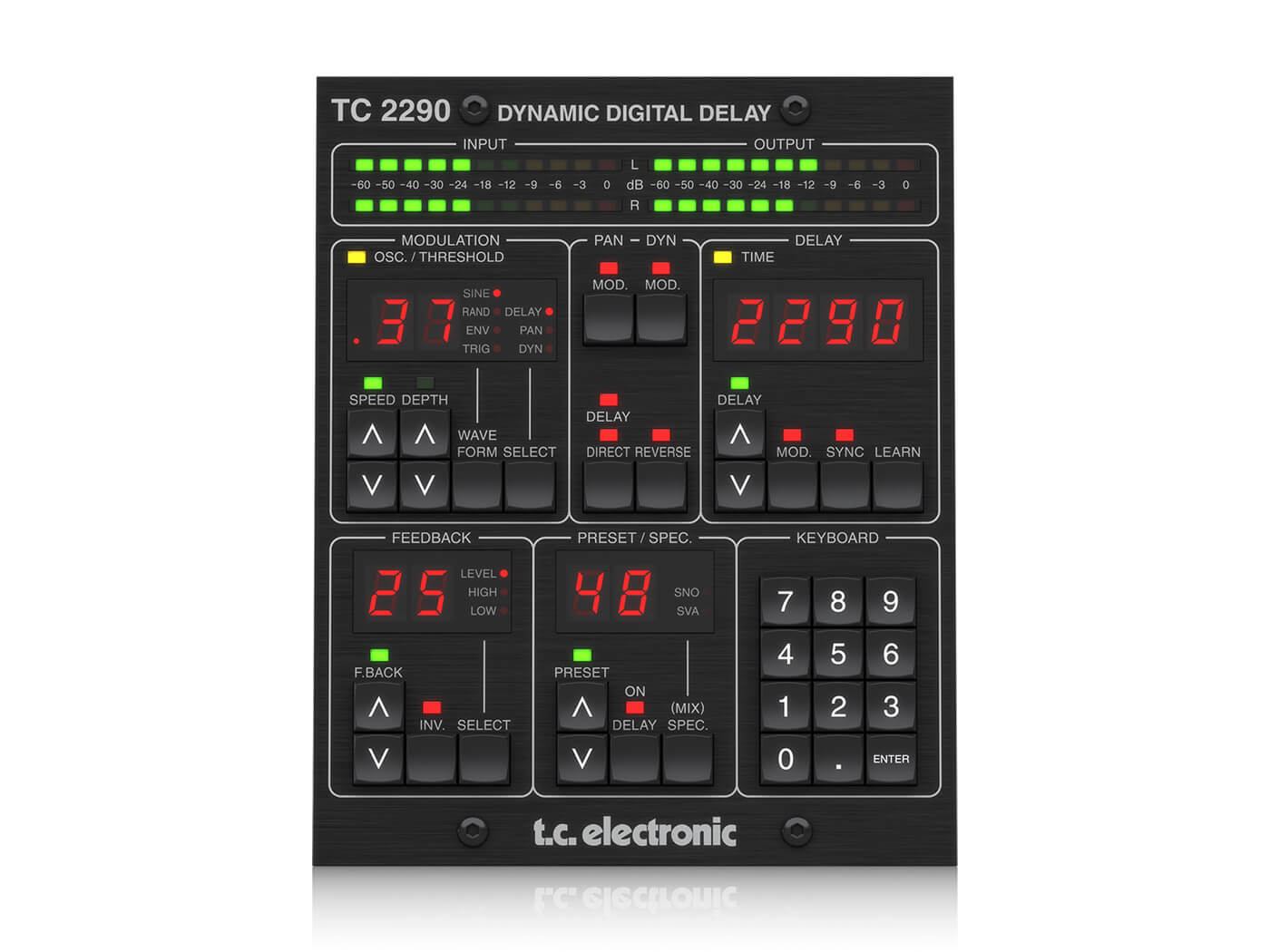 As mentioned, the plug-in’s window only handles secondary parameters such as a global wet/dry balance that can override the preset balance setting set from the controller, DAW tempo sync settings and so on. Preset management is also handled in the plug-in window and the software comes with presets copied from the original hardware, as well as ‘Artist’ presets created and used by famous TC2290 users. There aren’t actually that many presets by modern standards (not necessarily a bad thing!), but you can of course build up your own library, too.

The TC2290 was always more than just a delay unit, as like many similar units, it included modulators so that it could also turn out chorus, flanging, auto-pan and tremolo effects. It also had a simple envelope generator that could sculpt the delay parameters and signal in various ways. When added together, these modifiers gave the TC2290 the ability to create a wide range of effects suitable for many different applications, all with a tonal character that sat comfortably within a mix.

All of this has been recreated beautifully within the TC2290-DT – it creates both simple and complex delay-based effects that sound musical and ‘right’. The style of of effect is especially suitable for guitars and vocals, especially if you’re going for that big, grandiose – some would say over-the-top – sound of the 80s and 90s.

Moving on to the hardware controller, we find a solid and weighty unit with a grippy base so that it stays where you put it. The USB socket through which it connects to the host computer is safely recessed to protect it from damage, yet is easy to get at with even the fattest of fingers.

The controller exhibits a similar attention to detail as seen in the software and almost exactly recreates the original’s control panel, albeit with a different layout and scale. At the top are the input and output level meters, below which are six groups of controls and readouts arranged in two rows. These groups correspond with the control groupings of the original hardware: delay settings, modulation settings, feedback settings, etc, and even includes the numeric keypad.

The unit works almost identically to the original hardware, too, so if you’re familiar with that, then you will be in your element here. But herein lies my biggest question with the TC2290-DT. You see, back in the day, one of the major downsides to all of that digital hardware was its reliance on awkward, non-standardised control panels that could make editing a unit’s parameters a laborious slog. While the TC2290’s interface was (and is) somewhat simpler than the complex stacks of menus, pages and special button-press combinations found on much digital outboard, it is still a compromise between the number of editable parameters on offer and the practicalities of exposing those parameters via an interface limited by size, cost and technology.

When computers and DAWs became sufficiently powerful to take over from much of this digital outboard, the choice between maintaining racks of expensive yet limited hardware, or migrating all of that functionality into software, was a no brainer. With digital kit, it had a minimal impact on the quality and character of the sound produced, but a huge positive impact on usability because a large high-resolution GUI will always trump a small, fiddly control panel. Period. 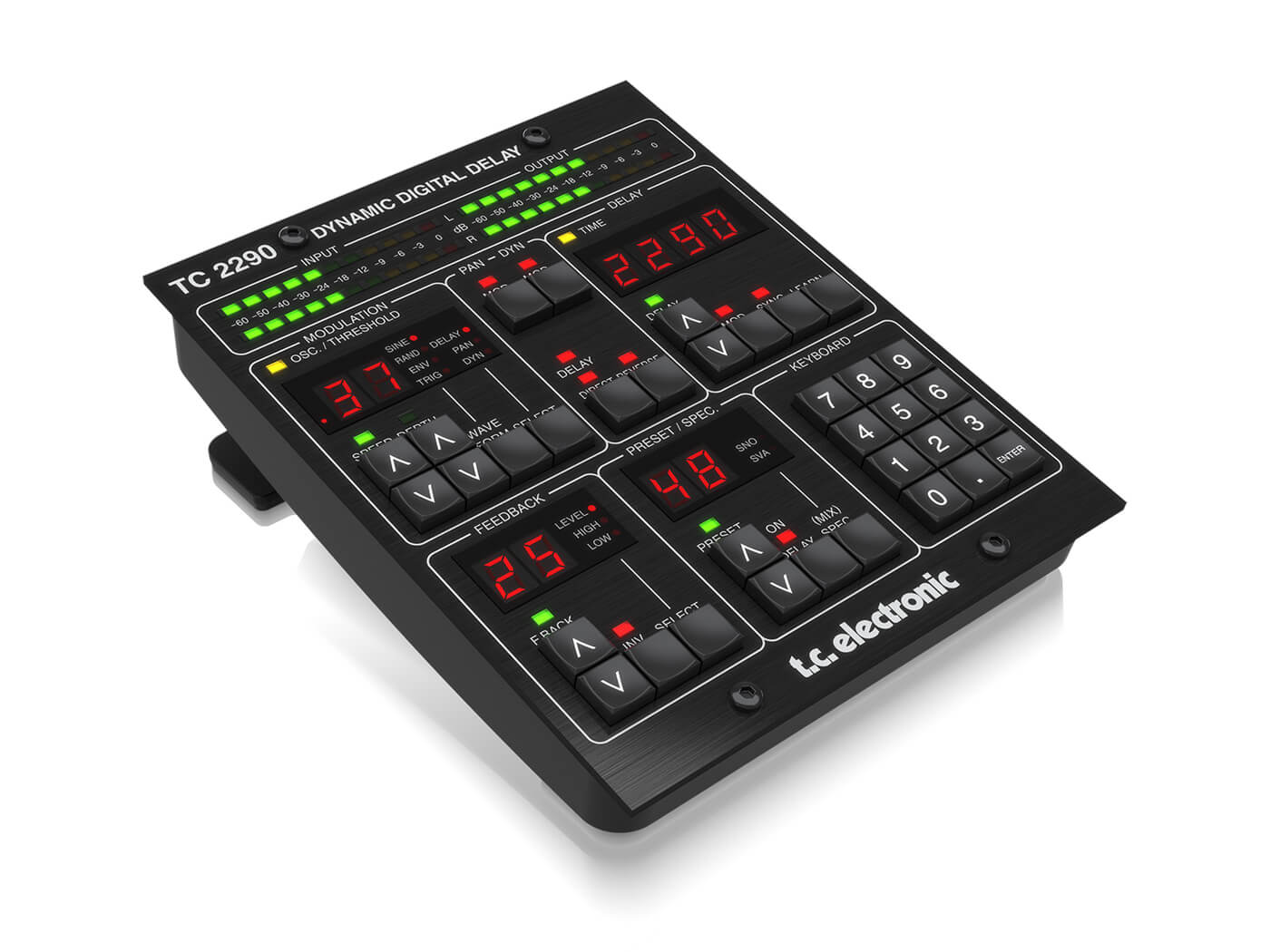 So while I am totally on board with going retro when it comes to modelling the great sound of classic hardware like the TC2290, recreating one of those awkward old user interfaces of yesteryear, without giving any concession to the usability benefits afforded by a modern DAW, for me feels a bit like a retrograde step too far. Also, as I found with the DVR250-DT previously, I didn’t like having to split my attention between computer screen and the hardware controller just to configure an effect and I’m not sure that I’d want another small box kicking around my studio and using up another USB port on my computer, especially when it’s a one-trick pony like this.

But my own views aside, make no mistake, the TC2290-DT is an excellent model and recreation of a modern classic and you will not be disappointed with the results it produces. Many will find the controller to be a fun and useful addition, too, as it does work very well. I just wish it had an onscreen mode, or that TC would offer a plug-in-only version of this great-sounding delay processor.

Delay plug-ins are ten-a-penny – your DAW will have come with a few and the internet is full of both free and commercial examples. But advanced delay plug-ins akin to the digital hardware of the 80s, 90s and 2000s, which combine various modulators and filters with the basic delay in order to create more complex effects, are rarer. The TC2290-DT falls into the latter category and offers a faithful and impressive recreation of the original hardware.

Blue Cat’s Late Replies demonstrates just how far a delay plug-in can be taken when it embraces the abilities of a modern DAW. The plug-in has the ability to host additional plug-ins anywhere in its signal path, so that you can link any effect to its eight taps and two feedback loops. 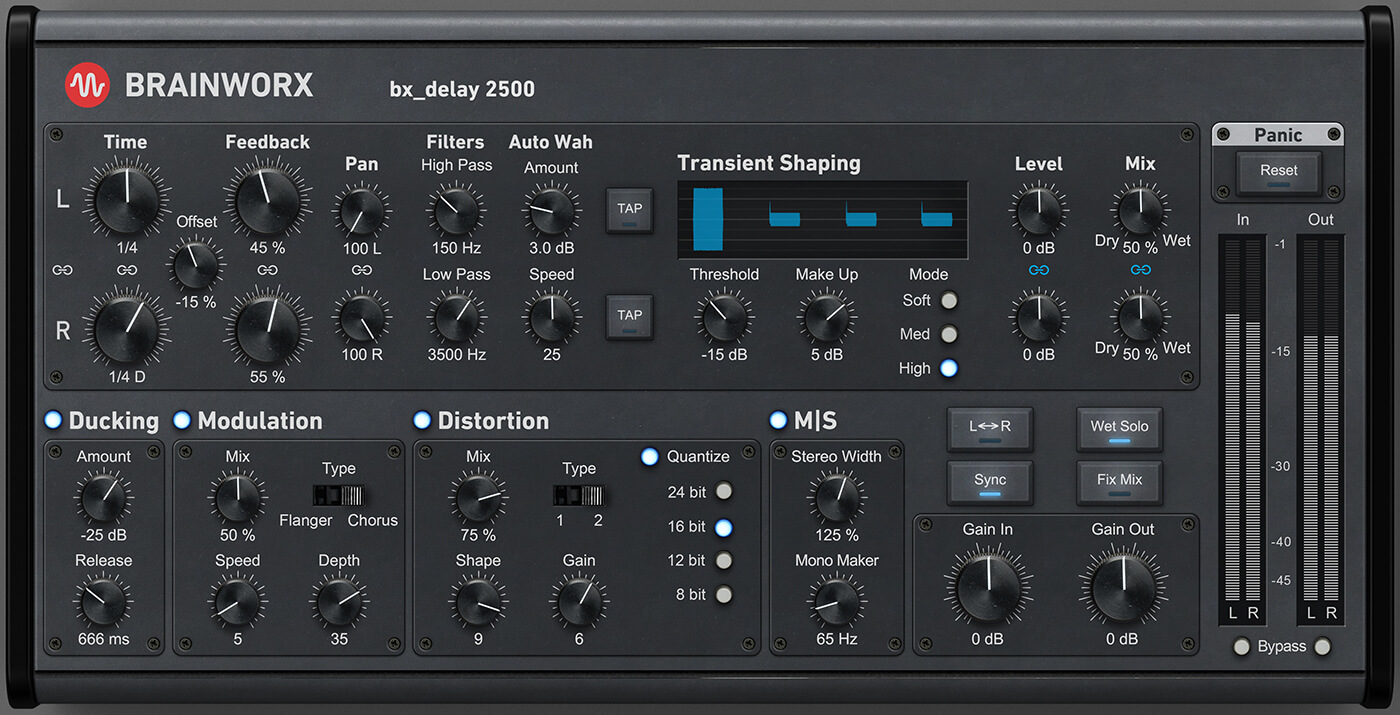 The bx_delay 2500 is a delay processor that allows you to mangle the delayed signal without the need for additional plug-ins in the chain. The plug-in’s GUI presents its many options in a clear, intuitive manner, and it offers mid/side processing and independent tap-tempo controls for each delay line.