The trend of replicating classic studio technology shows no signs of waning any time soon and with the DVR250-DT, TC Electronic takes us right back to the sound of the first commercially available digital reverb box… 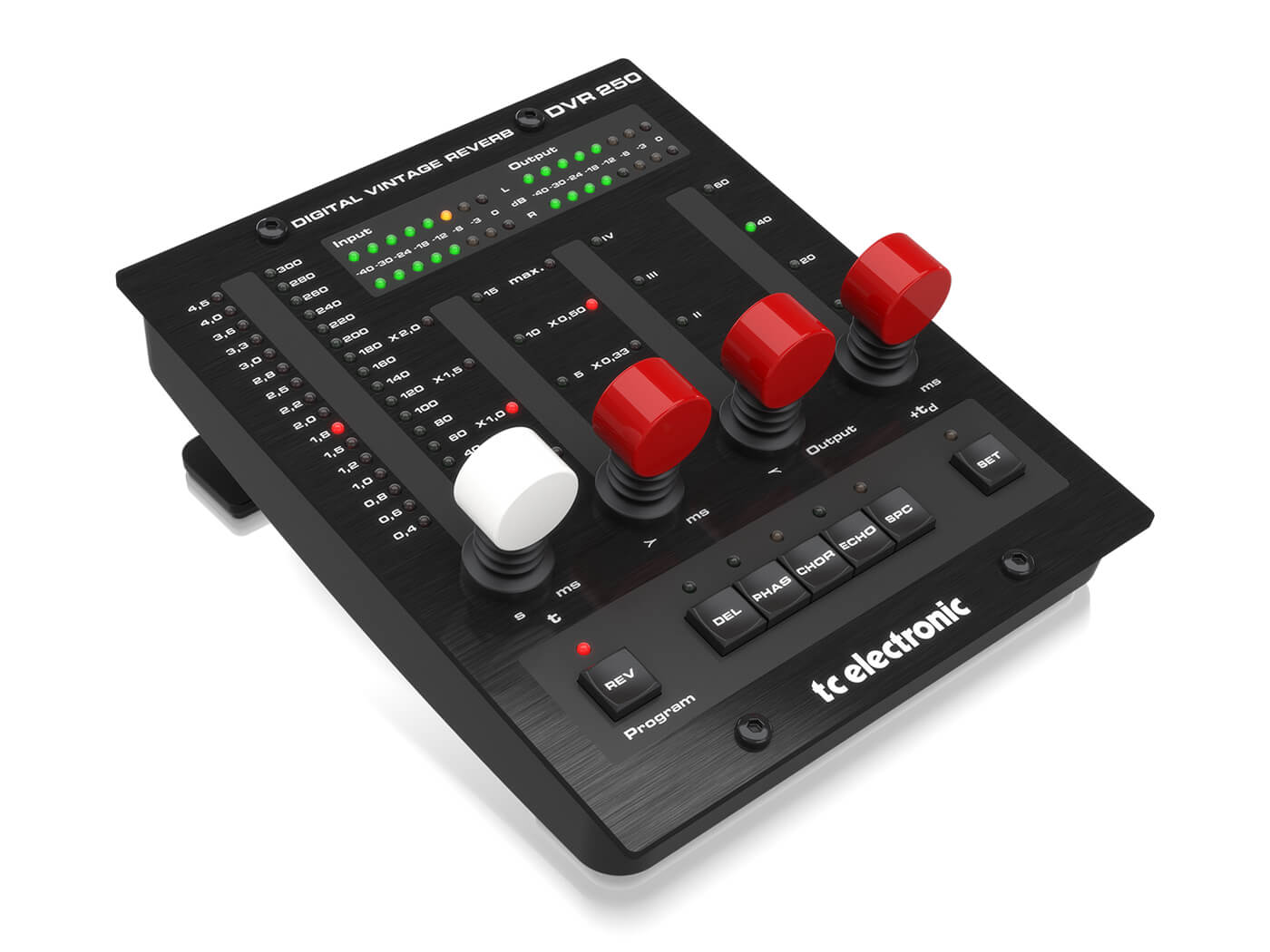 TC Electronic’s new ‘Icons’ range looks back at classic studio technology and replicates it for the modern age. Providing tactile hardware control over an intricately crafted software emulation, TC aims to allow access to legendary and heritage gear for all. The DVR250-DT emulates the sound of the EMT 250: the first commercially available digital reverb box. The question is, does TC succeed in recreating that unique original sound and, also, do we really need it? Let’s step back a little and look at the history of this particular unit.

Way back when digital recording and audio processing had yet to escape the research lab, there were a few different ways of adding a touch of ambience or reverb to a recording. One – the original method – involved placing a speaker and microphone(s) into a room that had the desired acoustic qualities, then playing audio through the speaker while recording the reverberant results via the mic(s). If you didn’t have a nice-sounding room to use, then plate and spring-reverb units could provide an electro-mechanical solution; while these could sound very nice (especially a good plate reverb), they were often large, bulky and expensive.

The change started in 1976 when plate-reverb specialist Elektro-Mess-Technik released the EMT 250, the world’s first digital reverb generator. This peculiar-looking beast was built into its own large, free-standing case, with heat-sink fins surrounding the casing, wheels on the base and a handle for moving the bulky contraption around. The top of the cabinet housed a control panel dominated by the four large lever-style switches used for adjusting the unit’s settings, and which would have looked more at home in an aircraft cockpit than in the studio. The unit could also turn its hand to other effects – delay, chorus and more – and became very popular in the studios of the day, as it sounded good and was much more versatile than acoustic and electro-mechanical solutions. 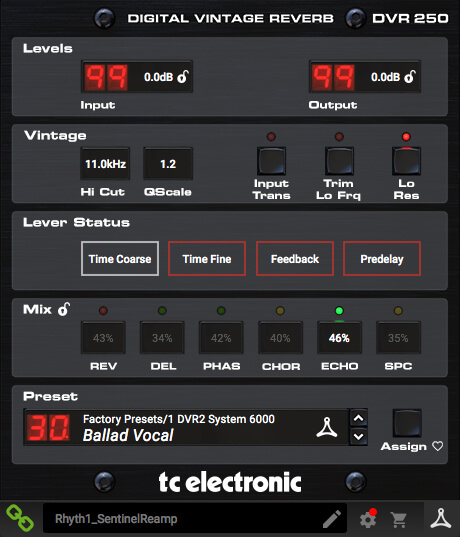 Unsurprisingly, given its heritage and classic sound, plug-in models of the EMT 250 have been around for some time and one of the best of these was developed by TC Electronic for its System 6000 audio-processing platform. TC has now taken that model and wrapped it into a plug-in, added a bespoke hardware controller that mimics the look of the original EMT 250 and released it as the DVR250-DT.

Devil in the detail

TC’s model of the EMT 250 is highly regarded and is recreated exactly in the DVR250. This allows the plug-in to create a relatively convincing 70s reverb sound that works really well on a wide range of source material. The model can also be made more-or-less vintage-sounding, while always retaining the flavour of the original hardware. Being a model of a vintage reverb, the DVR250 does lack the extensive sonic detail and clarity produced by modern reverbs, but that relative simplicity lends a certain musicality and cohesiveness to the sound produced. 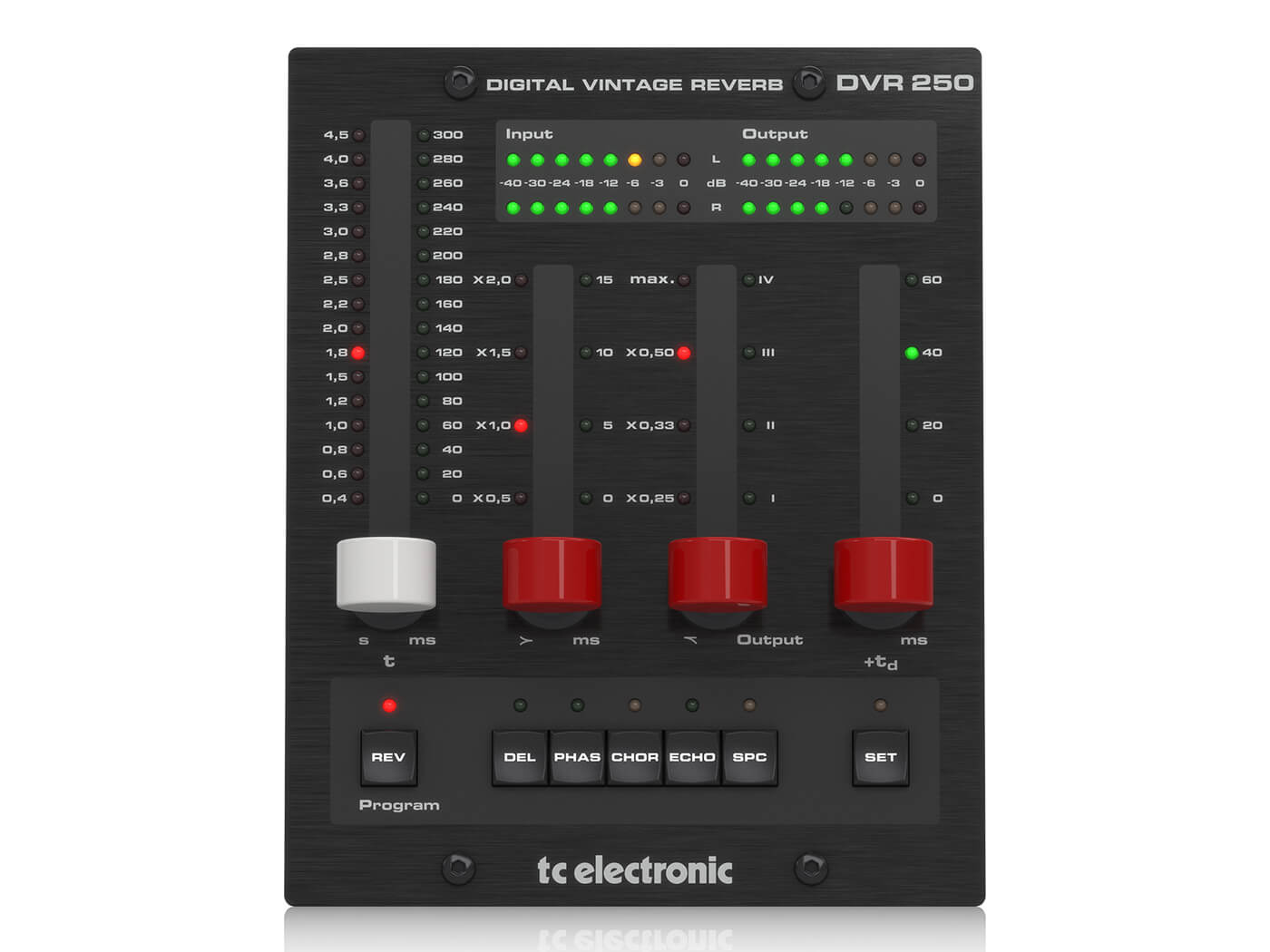 But I’m unconvinced by the controller. It works well enough, but the plug-in has so few parameter settings that it would be just as easy to control them on screen and not have to clutter-up your workspace and consume another USB socket with yet another black box. And in the absence of any throw or movement of the switches, all you’re doing is replacing the click of a mouse with the click of a switch and forcing yourself to have to look in two places when working with the plug-in instead of just one.

I don’t like the look of the controller, either: The EMT 250 it’s based on may have a classic sound that’s desirable to replicate, but its control panel is esoteric to say the least, and I’m not sure it’s something I’d want to see in my studio. 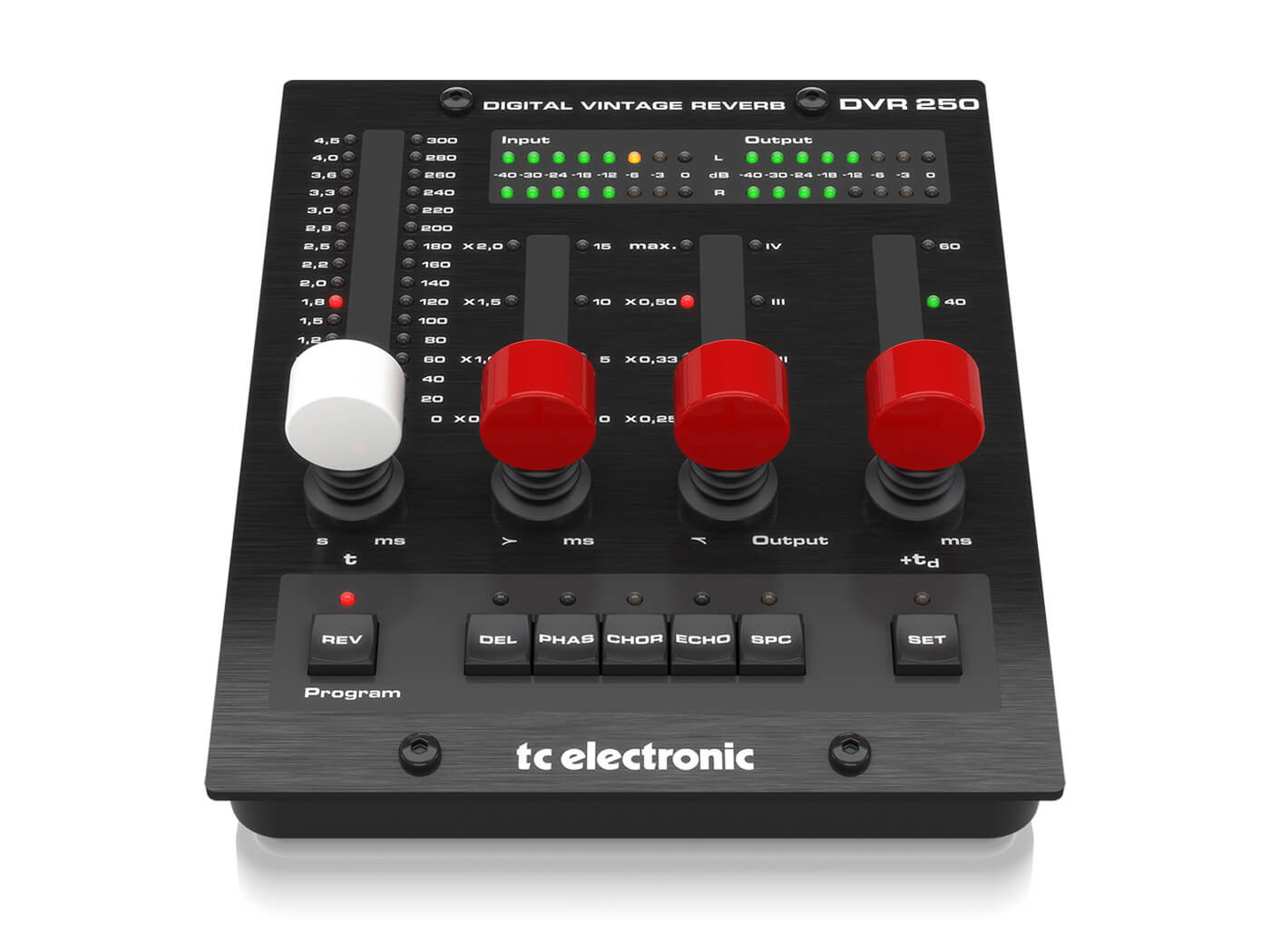 The seeming fragility of the DVR250’s switches and cheapness of the switch caps does not fill me with confidence about the controller’s long-term robustness, either. I’m also conscious that if and when that controller breaks, the entire plug-in will become unusable.

This could be easily remedied by the inclusion of a full onscreen control mode. Indeed, if TCE was to offer a plugin-only version of its excellent EMT 250 emulation, then I would choose that over the DVR250-DT controlled-version every time.

There are many other manufacturers who produce vintage reverb plug-ins and a few offer vintage EMT 250 emulations that are on a par with TC Electronic’s model. Therefore, it’s fair to say that the USP of the DVR250-DT is its hardware controller. Those who want this sort of hands-on tactility won’t be disappointed, although may find the controller’s switches to be a pale imitation of the big levers found on the original hardware. But if you’re happy working onscreen with a mouse, or if surface space is at a premium in your studio, then you’re likely to find that the DVR250’s controller detracts from rather than adds to the experience of using the plug-in and so may wish to look elsewhere to satisfy your vintage-reverb needs.

This PC-only emulation of the EMT 250 from small plug-in developer EmptyRoomSystems closely resembles the visual appearance of the original hardware, with a couple of modern tweaks to make it easier to use in a DAW. However, it lacks the other effects the EMT 250 could produce. 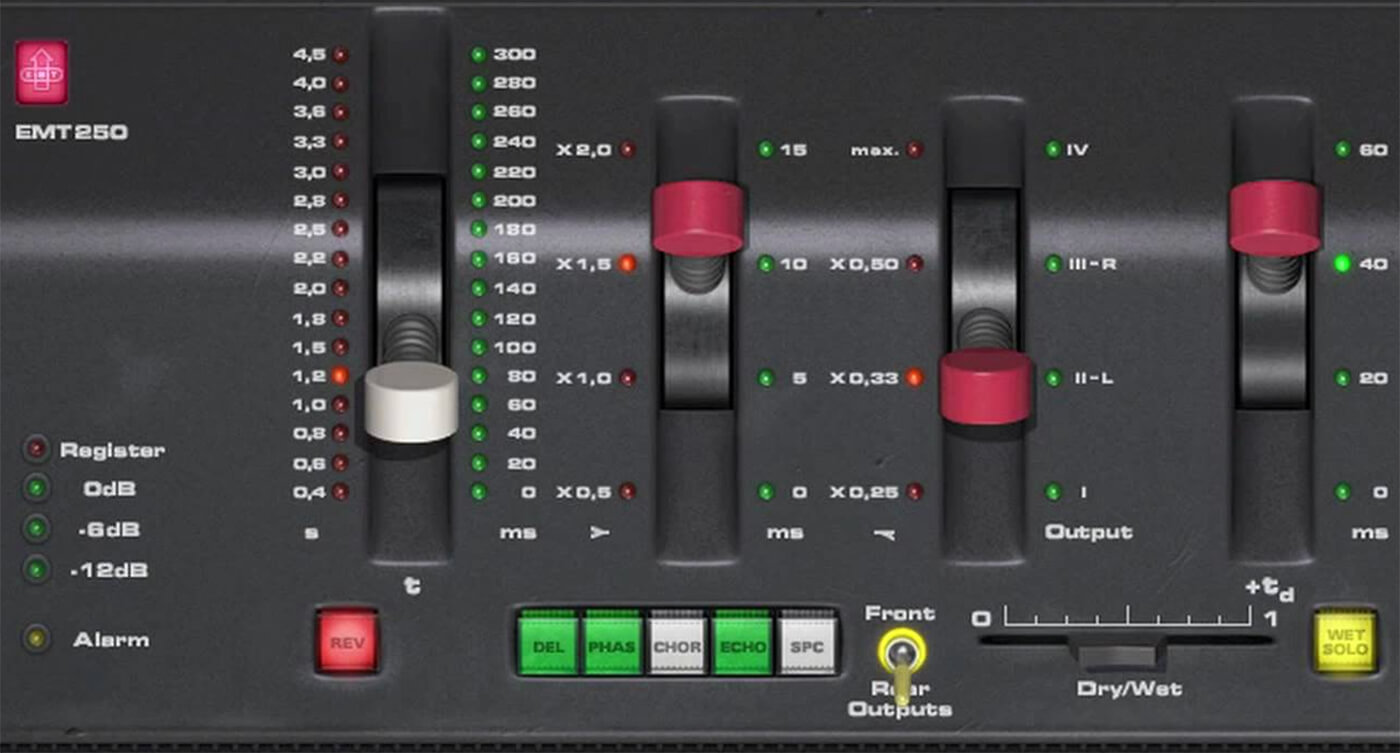 Universal Audio’s officially licensed take on the classic EMT 250 both looks and sounds the part. The plug-in’s interface is a precise recreation of the original hardware. Of course, you’ll need one of UA’s DSP-infused audio interfaces or the company’s Satellite DSP hardware in order to use this plug-in.