The ever-popular Oxygen controller keyboard range reaches its fifth incarnation, this time packing in smart chord and scale functions and an arpeggiator. 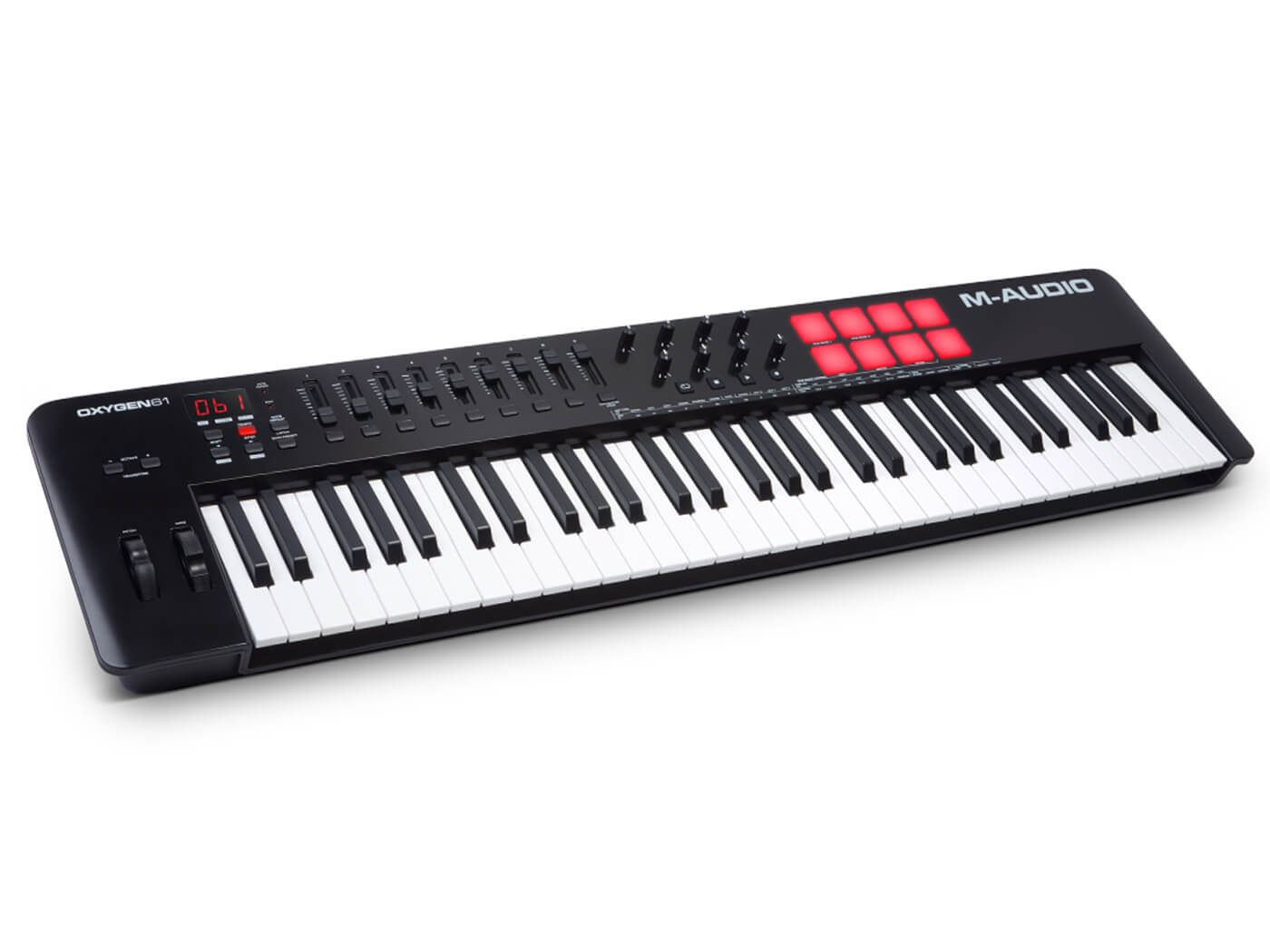 The Oxygen MKV range amps up the value for money again with an expanded and refined controller set for modern production and performance needs.


The hardy but lightweight Oxygen series from M-Audio is reinvigorated in the new MKV series, the fifth incarnation of the popular controller. The Oxygen MKV 61, reviewed here, is the largest in the MKV (mark five) range. The next model down, the 49-key version, is identical in all but octaves, whereas the 25-key model forgoes eight of the nine faders. There are some cosmetic changes from the MK IV predecessor, from the pad backlight colour to the rotary knob style, but the light yet robust build remains, as does most of the layout and the three-character LED display. The main updates are in DAW integration and new operations: Smart Chord/Scale and Arpeggiator.

The I/O is minimal with just USB 2.0 and sustain pedal sockets. Once plugged in, the MKV 61 shows up as three USB MIDI devices. The first is for standard MIDI, i.e. the keys, pads, mod/pitch wheels and controllers. Second is the DAW section, which includes the transport controls and the controllers when the keyboard is switched to DAW mode, which requires pressing the DAW/Preset button. The third device listed is the Editor, which integrates with the preset editor software allowing you to change controller assignments, manage/archive presets and change global settings.

As a collection of keys, faders, knobs and pads, the playability of the Oxygen 61 is fundamental. The light, non-weighted plastic keys may not be the first choice for an exquisite piano experience. Still, they produce a reliably sensitive response for what they are, and there are a few sensitivity ranges to choose from depending on the application. Playing percussive instruments, from drums to synth stabs and clavinets, is where this kind of keybed come into its own, as opposed to weighted types, and the Oxygen 61 serves these playing needs well.

The eight backlit pads can take a proper finger-drum pummelling but still react to a relatively light touch for fills, rolls and chord builds. The faders and knobs balance smoothness with enough resistance to allow accurate parameter setting. Even though the faders are justifiably short-throw, they are still equally useful for controlling DAW mixer faders and synth parameters. The LED display always shows the value being sent, so tracking your position is easy. This is also helpful for darker performance spaces as the position of the black faders on the black keyboard may be hard to identify. 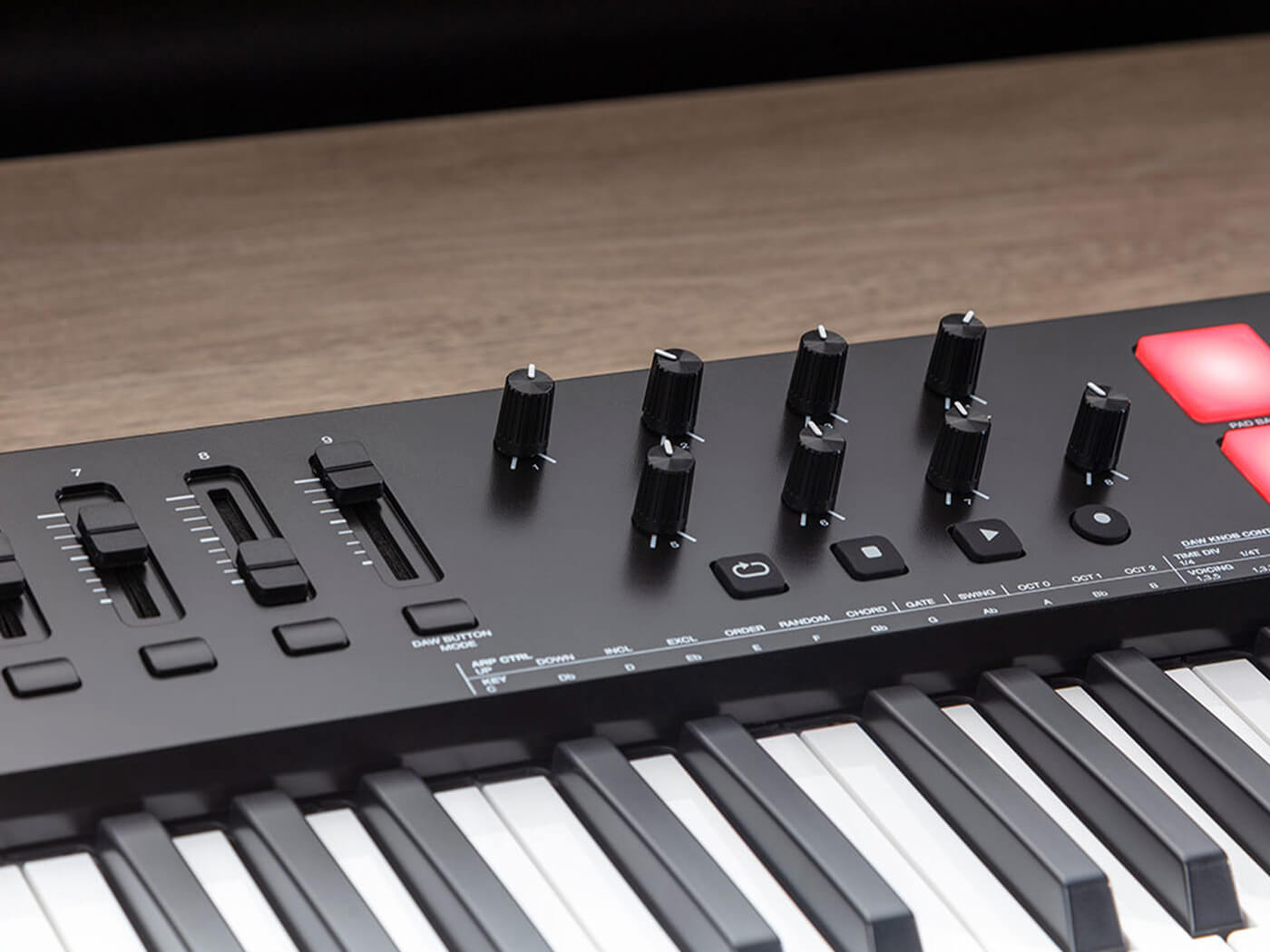 With a press of the DAW button, the nine faders, their buttons and the eight knobs become pre-mapped controls, alongside the transport panel, which runs in either mode. There are five DAW protocol sets based around the Mackie, Mackie/HUI systems and MIDI-based ones for Ableton, MPC Beats and Reason. In short, there’s plenty of functionality for most purposes. The keyboard comes bundled with Ableton Live Lite and MPC Beats, so this helps make a complete package. There are also preset mappings for the bundled Hybrid 3 and Mini Grand instrument plug-ins by AIR Music, making this more attractive from the outset.

The eight faders work as channel faders, with left/right cursor buttons banking up and down eight channels at a time. You can configure the buttons below to run as channel selection, solo, mute or record arm for their relevant tracks via another button. This ninth fader is assigned to the output/mix bus channel, however this is determined within the DAW. For the Mackie-based systems, the knobs function as pan controls; in MIDI CC-based DAW presets, they can control send levels, too. This is an impressive range of control functionality without having to get elbow deep in controller assignments. Notably, the controllers work smoothly without any jumps or glitching. 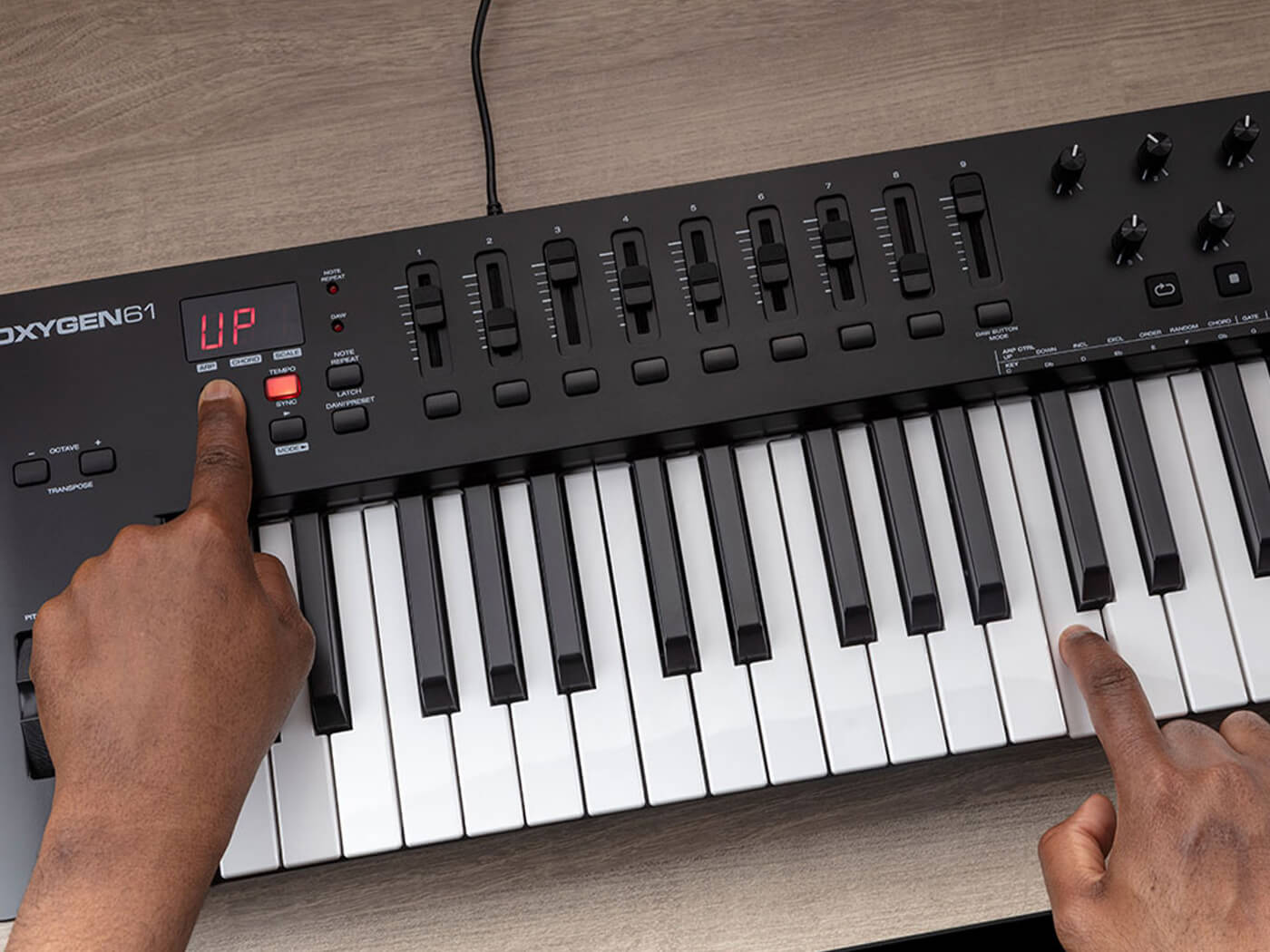 The cluster of buttons around the LED display unlock a host of features, two of which are rhythmically related: the arpeggiator and Note Repeat. The former is a mode of its own, along with Smart Chord and Smart Scale. With generous use of the Shift button, almost two octaves of keys become controls for arpeggiator parameters: time division, gate time, swing, octave range and note order. You can clock the arpeggiator externally via the USB MIDI, such as from a DAW MIDI clock, or internally using the Tempo/Sync button, which can be tapped or programmed. There is also a latched arpeggiation mode to free your hands for more complex chord selections. You can get more options in a DAW or synth, but all the essentials are here, and it makes the Oxygen 61 MKV a solid choice for programming and performance.

Note Repeat applies to the pads and comes in latched and momentary flavours, with the latter allowing rolls or repeats when the Note Repeat button is held down. This has enormous potential for sample triggering and beat making with time divisions running from ¼-notes to triplet 32nds.

The Smart Chord and Smart Scale modes offer time-saving options for programming and performance. They share some Shift button-based parameters such as base key and scale (major, minor and custom), with Smart Chord supplying eight voicing options as well. Smart Chord is excellent for cooking up in-scale progressions without having to be a proficient keyboard player. However, as with the Smart Scale, some musical knowledge will help you understand why the same chord (or note) is sounding in D major when F or F# is pressed. This is a useful function for learning as much as it is for programming and composition.

The MKV version of the M-Audio Oxygen 61 fits a lot into a small and low-cost package, from the functionality to the bundled software. The arpeggiator, pad note repeat, and chord/scale functions add handy tools that bring the Oxygen up to date. It’s a fantastic deal for those making their early steps in music production and those a little further along in need of a budget controller that won’t leave them short on options. 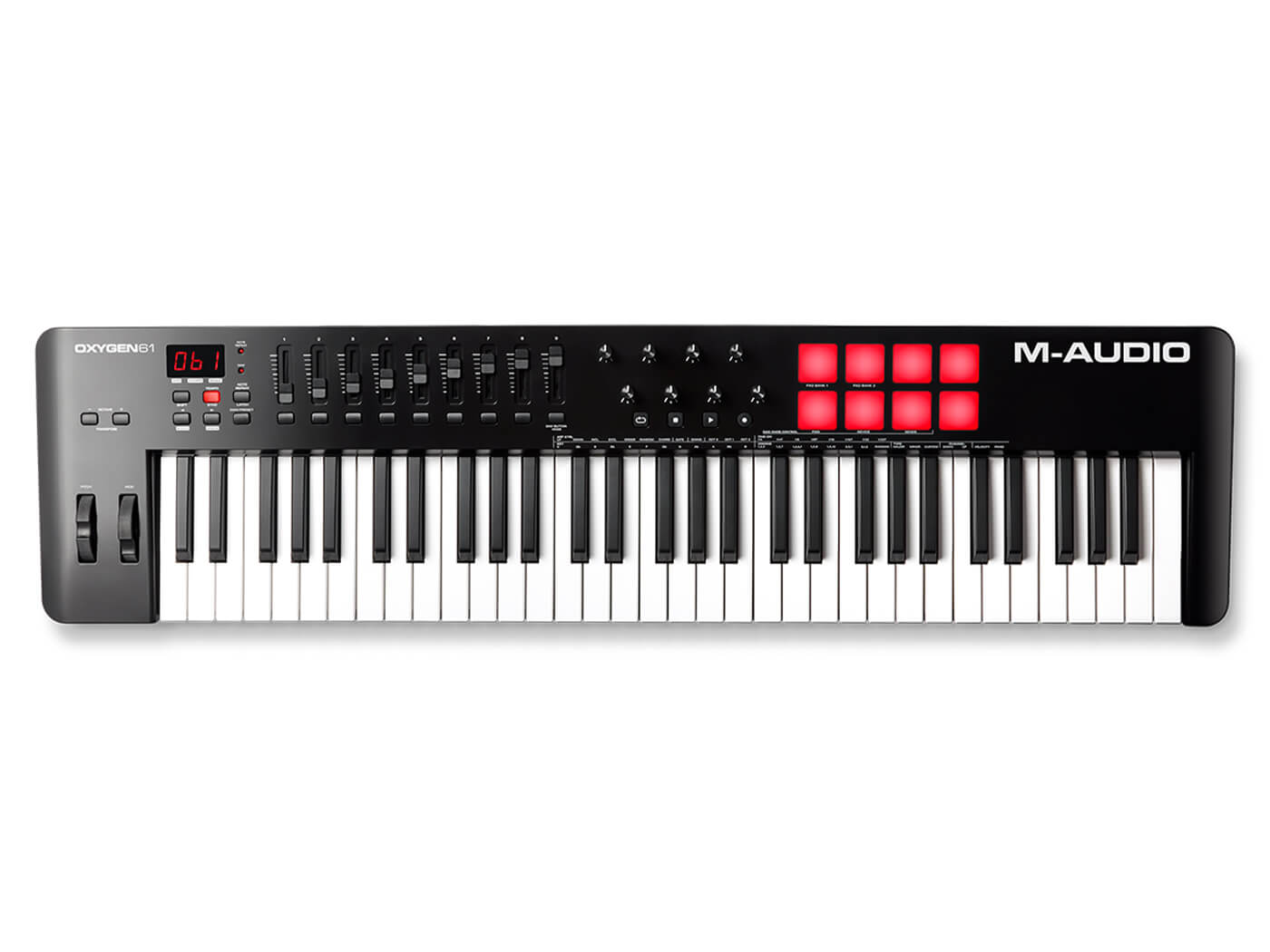