Presonus’s latest pad controller is compact, sturdy and can take charge of a lot of your studio applications. You might even say: ‘it’s bigger on the inside’. 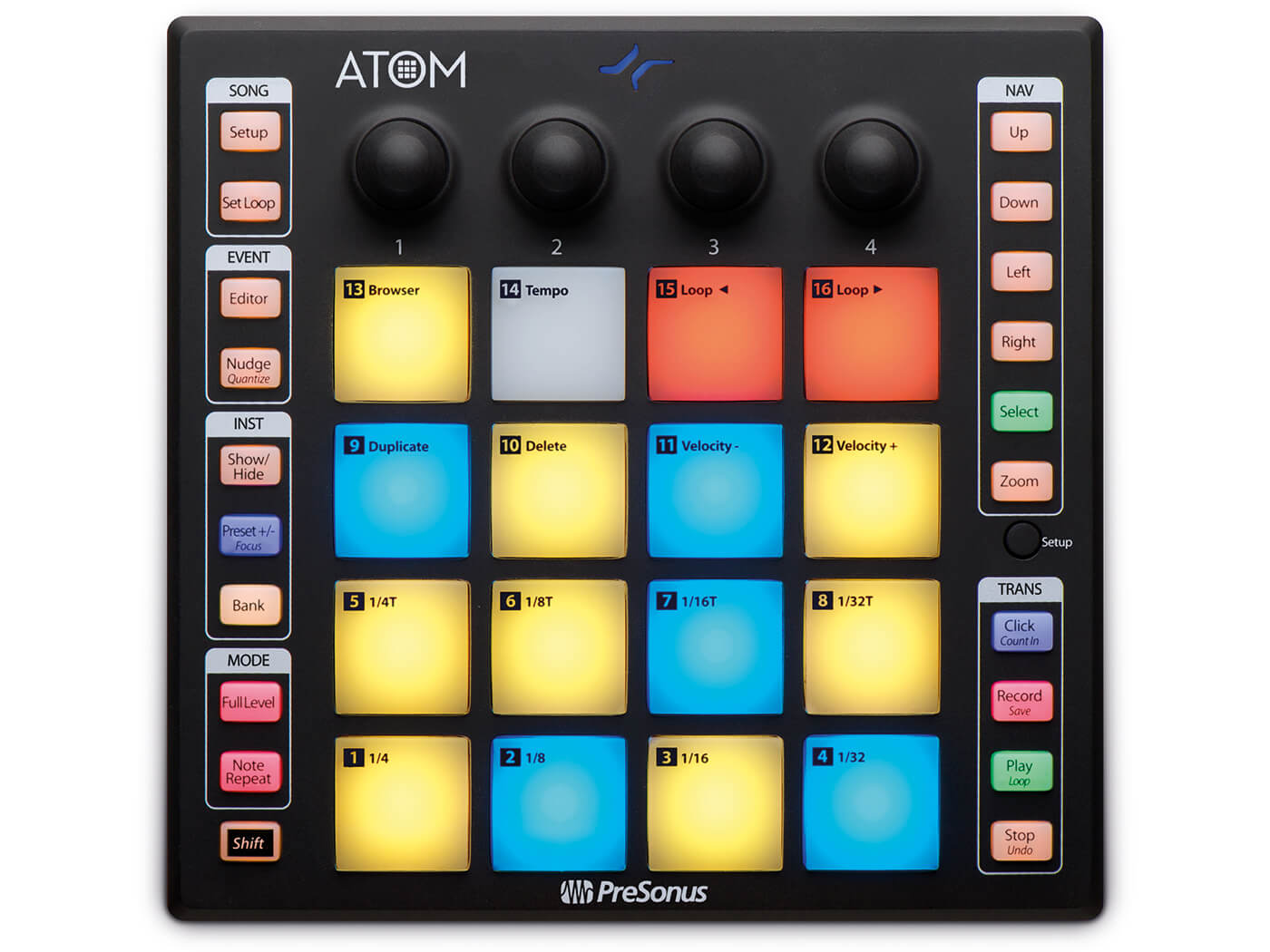 The pad controller appears to be as popular as ever when it comes to hi-tech music production. Novation‘s Launchpad range has recently been updated, while models from Akai, Pioneer and Korg provide varying levels of control over a huge range of hardware and software devices, while Ableton‘s Push and Native Instruments‘ Maschine excel with their very specific and highly-detailed hardware integration.

Presonus has also been in the controller game for a while now, and has produced plenty of hardware with DAW and other MIDI control: everything from its FaderPort 8 (which we reviewed a couple of years back) right up to its huge Studio Live digital mixers have some level of MIDI control in there, so it’s fair to say the company has great form here.

Size of an Atom

Atom is a compact pad controller that is not only designed to control the obvious – beat production and performance is clearly a target market – but also the not so obvious. The unit features a basic one-octave keyboard configuration and can also control many DAW options, with (perhaps unsurprisingly) Presonus’s own Studio One DAW being the tightest of integrations. With that in mind, there is a copy of Studio One Artist thrown in, which we’ll come to later, but experience tells us that it is one of the best ‘cut-down’ DAWs out there, so Atom kicks off with a strong base on which to build.

The unit itself comes with a Quick Start guide and USB cable, and that is it (as you might expect these days, the full manual is a download). It is what you might call ‘pleasingly compact’, sitting solidly on your desktop thanks to rubber feet, and neither excessively large nor small enough to get lost among your clutter. Atom is USB powered and dominated by 16 (initially blue) pressure and velocity-sensitive pads in its centre, which are very playable.

There are four endless rotaries (assigned to MIDI CC 14-17) along the top of the unit and 10 buttons on both left and right sides which select a variety of options. Bank, for example, allows you to select between eight 16-pad set-ups so you can control up to 128 individual sounds. Beneath that, with Full Level engaged, each of those 16 pads will trigger its target sound at maximum volume, while Note Repeat engages a repeat/roll effect at a user-defined rate by pressing and holding down a particular pad. The remaining controls are all assignable but are initially set up to navigate around your software or act as transport controls, or edit events. 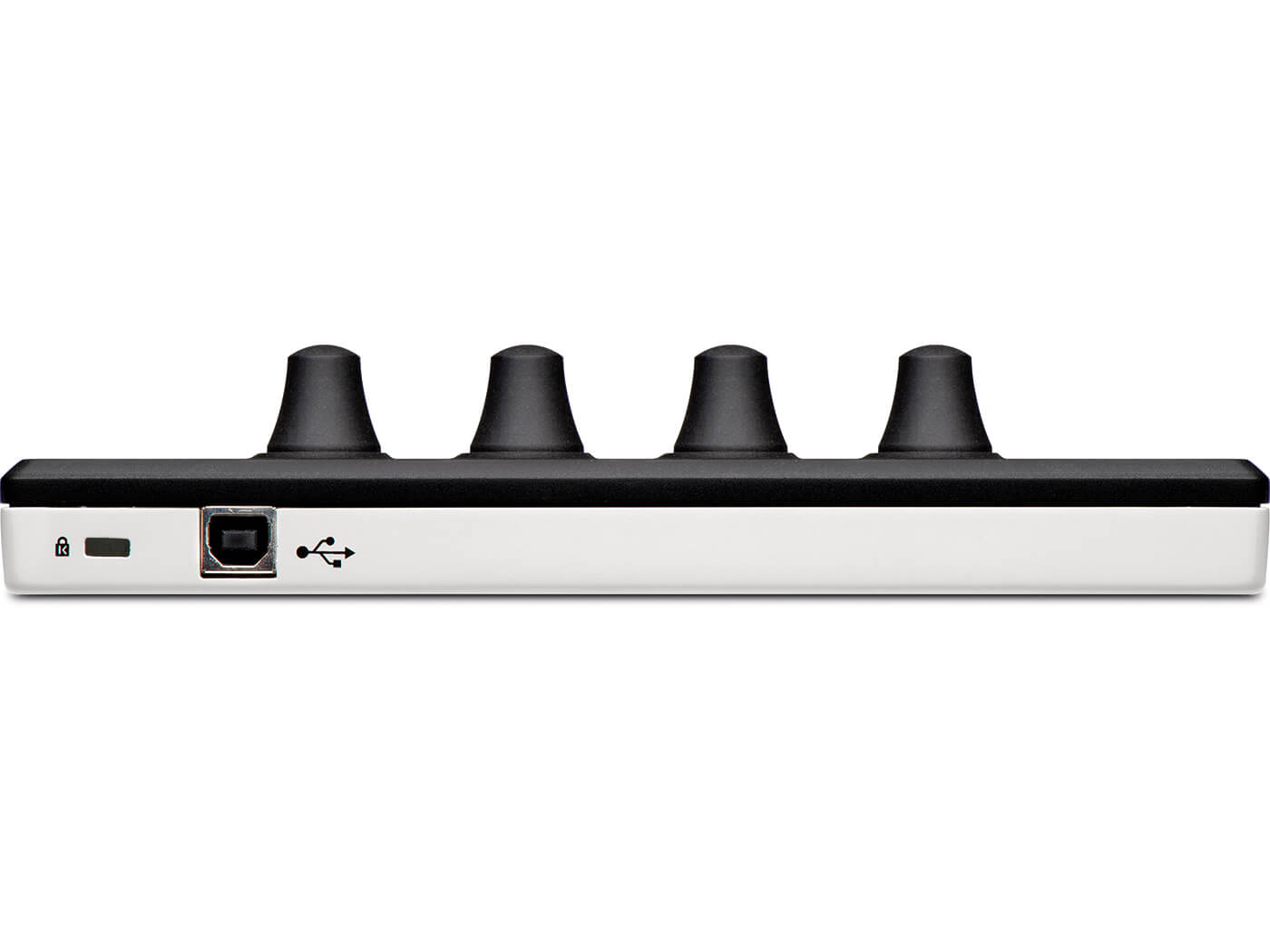 You’ll want to register Atom to get all of the available downloads, including Studio One Artist. Another essential one is Universal Control, software that provides a bridge between your DAW and computer set-up, and pretty much every Presonus device ever made. I’ve been downloading various incarnations of this for years, and it’s now at version 3.1. Thankfully, it installs over and deletes all those previous versions so you are up to date.

The diminutive Setup button will put Atom in either MIDI Drum Mode or MIDI Keyboard Mode (or indeed a third and equally important Mardi Gras mode where the unit cycles through its impressive colour displays). In either of these modes you can use the unit as a drum or keyboard controller, with the latter turning the pads into keys (albeit not in any traditional sense). As with other pad controllers, the notes are simply shown from left to right, bottom to top as an octave (actually C to C) with yellow-lit pads as the white notes, and blue-lit as the black.

There are very useful options to select the Pressure Mode of the pads (with aftertouch being an option); the Pressure Threshold (how hard you have to hit the pads to make them work); the Strike Velocity (how responsive the pads are); and other set-up features like Tap or internal clock tempo. 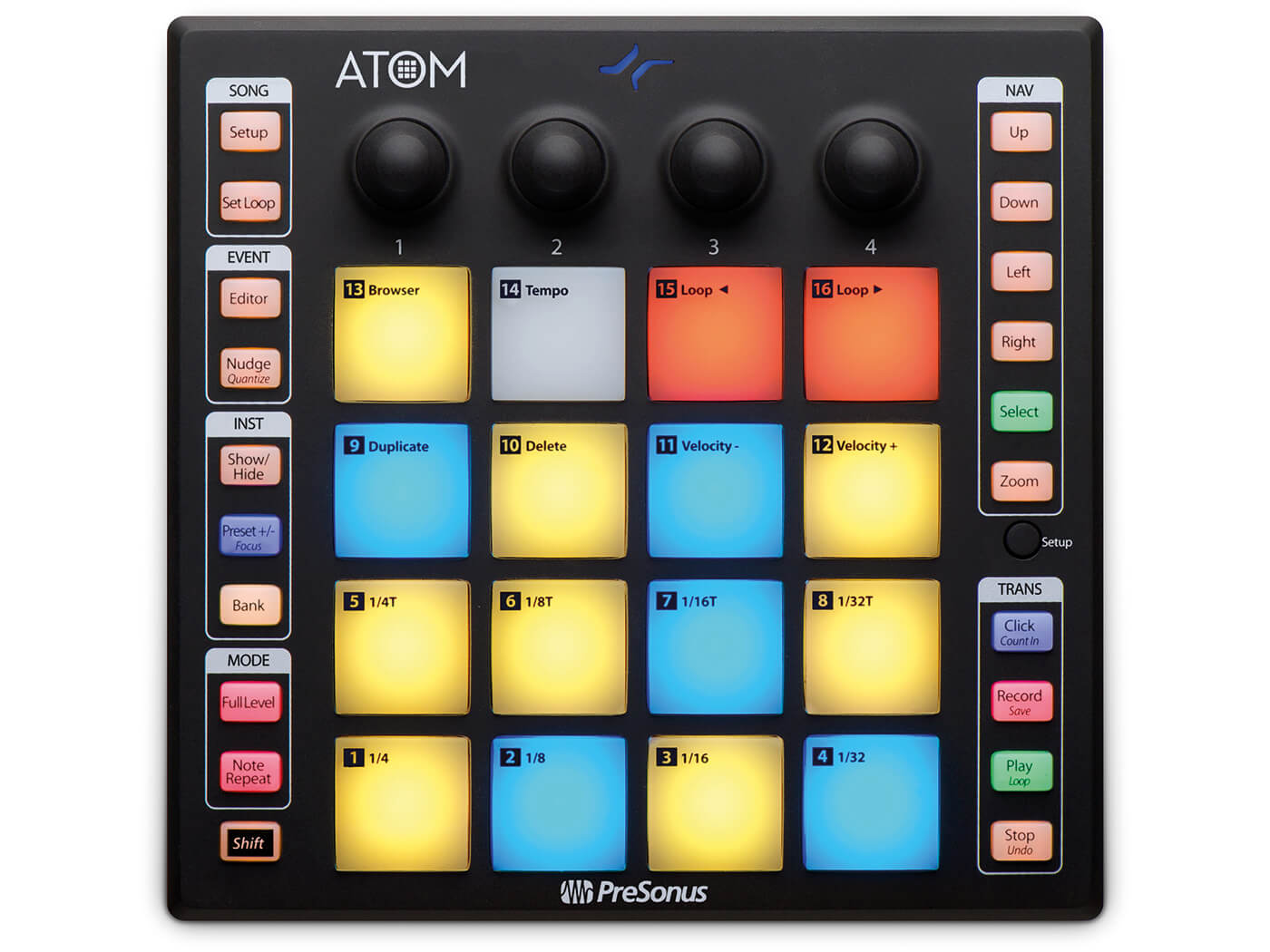 Presonus claim that Atom is “compatible with most music production and performance software”, yet the manual doesn’t really tell you how to set the unit up with anything other than Presonus’s own Studio One DAW. You can understand the level of dedication to this product but some coverage on other DAWs would have been nice. Out of the box, the only thing it will control in Live and Logic, for example, is beats and notes (which it does with some aplomb, admittedly) but nothing else.

With Presonus’s own Studio One it is, of course, a different matter. Like me, you might have to update your version to the latest, and of course, if you are not a Studio One user, Artist is included with Atom. This is a fairly big download but an excellent so-called ‘cut down’ version of Studio One with unlimited audio tracks. It lacks support for AU, VST2, and VST3 plug-ins, but you get a lot of instruments and effects anyway, so it’s a great partner for the Atom hardware.

Once updated, Studio One will show Atom in its list of hardware controllers, and the level of integration is up there with the best. The main options that Atom controls in Studio One include the transport controls, changing the DAWs instrument presets, browsing virtual instruments and adding them to sessions, creating loop points; navigating around and zooming in and out of the timeline and editing and quantising notes. Pretty much everything, basically.

The level of detail here is quite extraordinary. Often you might have to have a mode selected (Set Loop, for example) but then it’s a case of going right in to edit velocities, open up instruments, record drum parts, pretty much everything you can do by way of your mouse and clicking. Inevitably you will spend some time getting to grips with a new way of working, but it’s not a very steep learning curve, and once you’ve established the fact that it’s a case of opening, say, the Editor on the left and then making changes on the right, you quickly establish the ground rules. Atom also works incredibly well with Presonus’s own instruments, not surprisingly fitting in very well with the likes of Impact. I wouldn’t say it takes control completely away from your mouse, but certainly takes the strain off.

There are ways to get Atom talking to other DAWs by way of the Universal Control software, but that seems to be a fringe target for Presonus. Atom is out and out a Studio One controller in that the integration with that DAW is so deep and well implemented. I would even go so far as to say that the software and hardware experience is so tight that £115 just to try it out has to be money well spent; you are simply not going to get this kind of hardware/software set-up anywhere else for that kind of outlay, so even if you’d never considered Studio One as a DAW choice, perhaps now is the time. 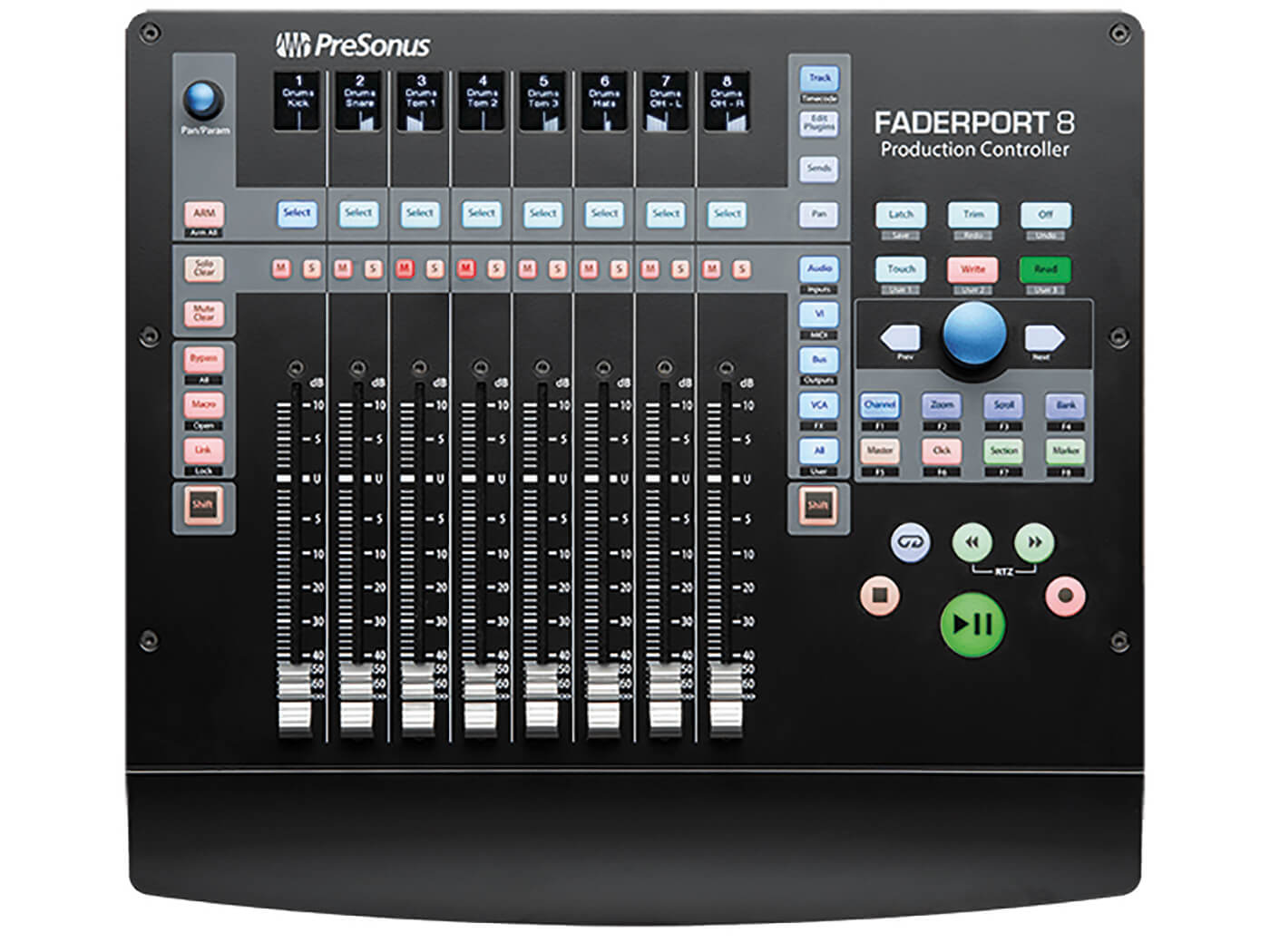 If you want a fuller, more nuanced control experience with Studio One you could do worse than Presonus’s own FaderPort 8. Less than £400 gets you proper faders, transport controls and great hardware integration. 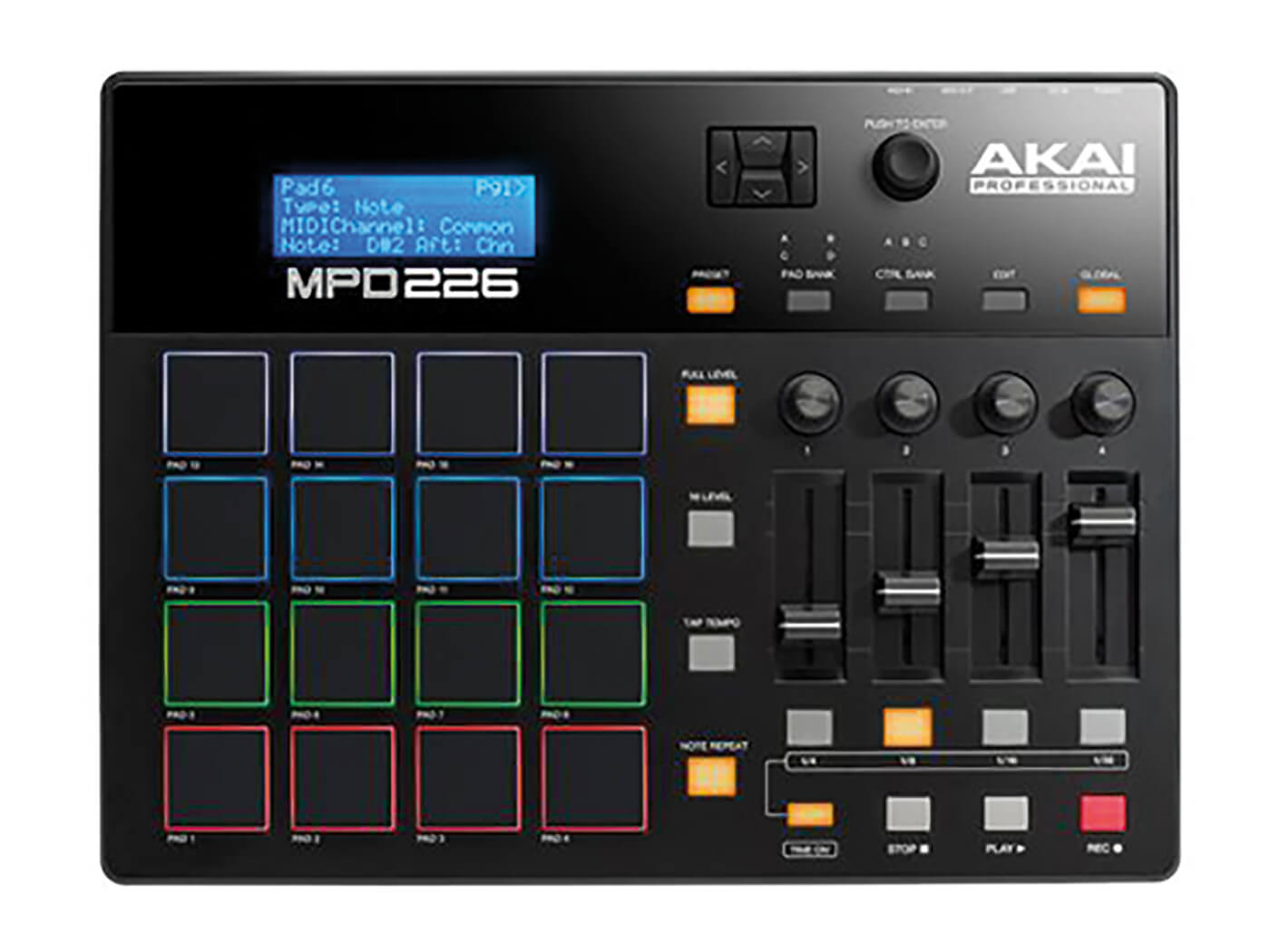 Akai is the other choice to go for when it comes to generic and low-cost MIDI controllers. The MPD 266 isn’t DAW centric but comes with faders, pads and dials and is only a touch more expensive than the Atom.