Nektar’s latest not only offers deep integration with several DAWs, but also takes on plug-in instruments, and it might just shake up the controller world. 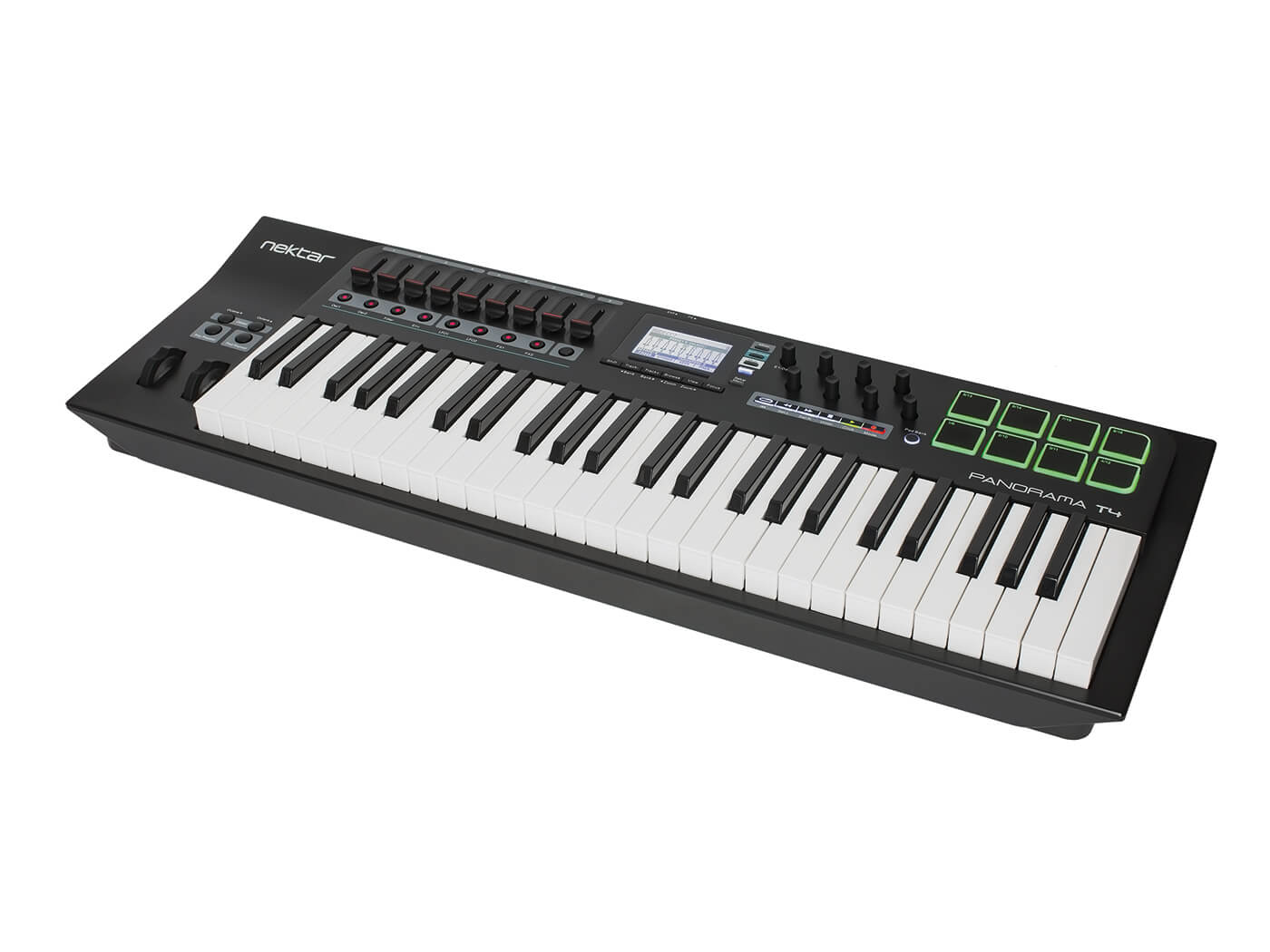 Most controllers will give you some level of DAW control, for sure, but when it comes to instrument control, perhaps the most outstanding ones I have reviewed recently have been the extreme ends of Novation and Native Instruments.

NI has its Komplete Kontrol system, where KK software on your computer effectively allows you to load in an instrument and its parameters are transferred to the Komplete Kontrol hardware for you to tweak. That’s like turning the software into hardware, but it does focus on the instruments rather than the DAW. Novation’s SL MkIII focuses on hardware and software, using an almost multi-timbral approach to controlling up to eight instruments.

Nektar’s new T-range – there’s a 61-note as well as the 49-note on test here – takes a little bit of everything, using its own software shell like NI’s Komplete Kontrol and Akai’s VIP software – but adds more DAW integration and all for a very tempting price. So does it do DAW control better than anyone and control those instruments?

After reviewing keyboards with mini keys, touch keys or even no keys, the keyboard on the T4 is the first welcome surprise; it has very playable keys with aftertouch and an almost semi-weighted feel (but actually what Nektar calls ’synth action MkII’ keys).

The unit itself feels solid but not too heavy, quite compact and with a good range of controls. You get nine sliders, eight rotaries, eight pads plus transport and navigation button. The screen is a standard LCD. 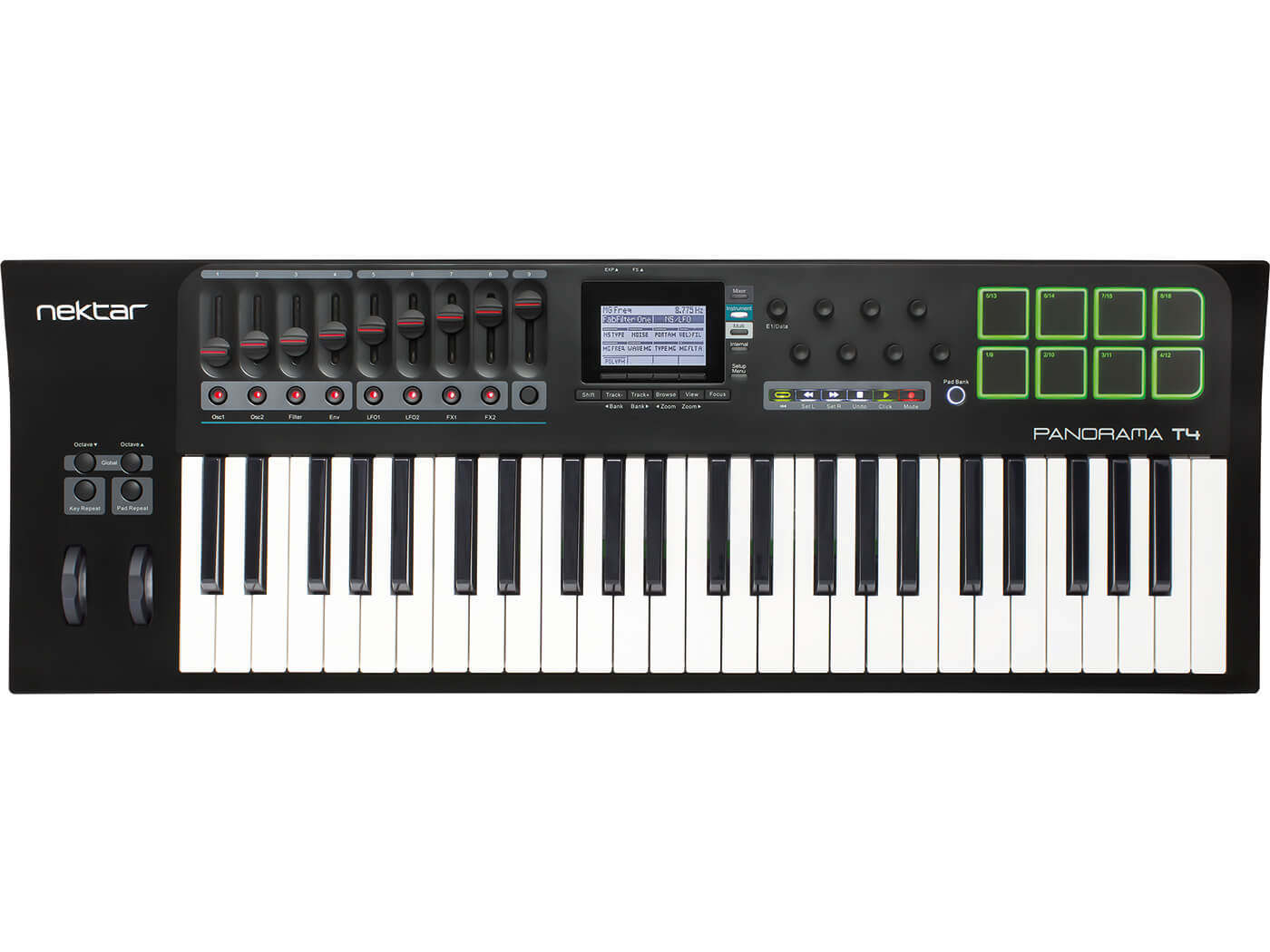 Setting up is fairly straightforward. Register yourself here and fill in a quick options form with what operating system and DAW(s) you use. Pleasingly, there is a good range of options on offer – see left. Some of these (like Live) are simply the Mackie Control Universal standard, but there are also downloads for deeper integration with other DAWs including Logic, Reason and Bitwig. (Nektar gear has a good reputation of working with both of the latter – indeed, a copy of Bitwig comes free with the keyboard).

There will also be a dedicated Studio One download by time you read this and Nektar has supplied me with it for this review. As well as the DAW-specific downloads, you also get a firmware updater plus the Nektarine installer – possibly the most important of the lot. Nektarine is the name of the software I talked about earlier; the shell which takes your plug-ins under its wing and makes them more accessible from the keyboard. I’ll cover this in more detail later.

First up though, I set the T4 up to control Logic. This is a matter of updating the firmware, then selecting T4 as your Logic control surface and Nektar as the input and output. Logic is up and running in no time, as is Studio One, which automatically assigns the hardware.

With both, you get much deeper integration than you might expect. On a basic level, there’s control over all of the mixer faders (with the sliders), pans (with the rotaries), transport and track changes with the array of buttons. But things can quickly get more interesting and controllable in pretty much every area. Simply pressing Shift with the transport buttons, for example, lets you move to various song positions, set loop points, even undo the last change.

It’s here that the buttons beneath the T4 screen come into their own, each opening up a new area on your DAW for T4 to control. Press the Sends tab and its rotaries now control up to eight sends on the highlighted channel. The other three options cover Macro (where you can freely assign eight parameters of your choice to the eight encoders) and Write (to control automation within each DAW), while Pan takes you back to the standard control.

There’s more – a lot more: everything from zooming in your DAW screen to total plug-in control. This latter feature is a definite highlight, as you simply press Instrument on a track which has a plug-in and that instrument will open up. You might need to make sure that ‘Panorama’ is highlighted yellow top right and then you will be able to control its major parameters, all editable, with the T4 rotaries (for things like level, and filter) and sliders (for envelopes). You can even change patches and the instrument name appears on the T4’s screen. It works right out of the block, no problem, and nor does it require the new Nektarine plug-in. Talking of which, this kind of DAW control was not really supposed to be stealing the thunder, so let’s get to the main event.

Most DAW users will be happy with this deep integration, but Nektarine is the star of the show. Once installed, your DAW should pick Nektarine up as a plug-in (Logic and Studio One did straight away).

You’ll then need to open it as a standard plug-in on whatever instrument channel you like. It’s not too exciting to look at, to be honest, but you need to scan your plug-ins in order for it to get going – quite a slow process, as it goes. Once done, though, it orders them all for you and you simply load them in, within Nektarine. Then you can control them via the T4. Easy. 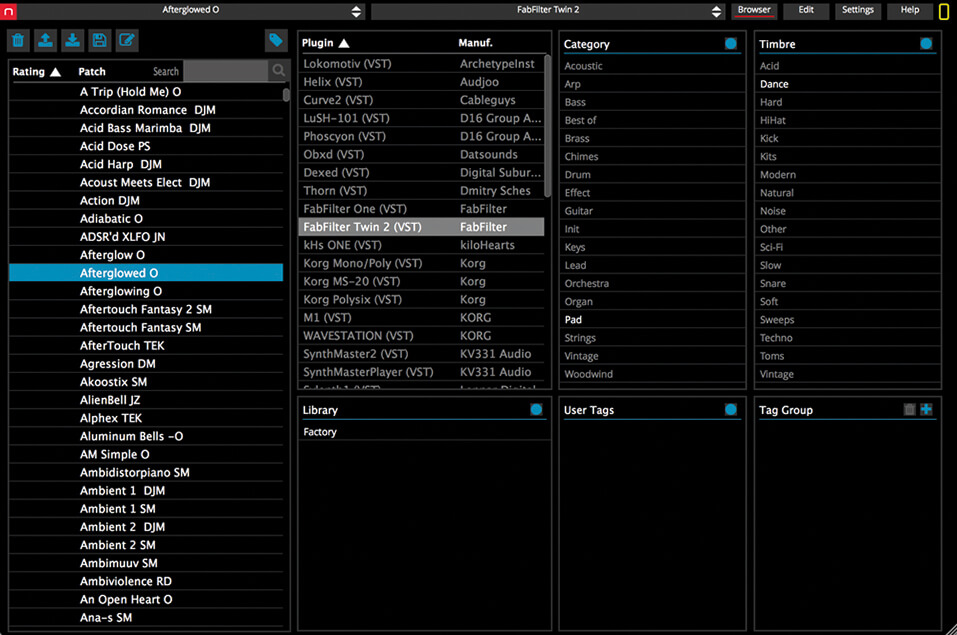 In fact, it’s so easy I would probably use Nektarine without the T4 – it seems to simplify everything and really does make switching between your instruments and their presets very easy indeed, again showing the name of the VST/AU on the T4 screen for that software/hardware integration feel.

Again, that’s not all. There’s a tonne of other things you can do, like changing parameters for whatever slider/knob you like (easy), setting up multiple plug-ins in one instance of Nektarine (great!), and setting up tags for presets (not tried). All brilliant and once you get the hang of it, everything is done via the keyboard.

T4 has knocked me sideways a little. I’ve reviewed Nektar keyboards in the past and found them great, but a bit of a faff to get up and running, possibly leading to their ‘in the know’ user base who swear by them. So I was expecting my eternal MIDI controller battle to continue, but actually, everything worked as promised. The deeper DAW integration is an absolute joy and Nektarine is genius. I thought it might end up being another layer to wrestle with, but it’s a lot more than that, and very intuitive, highly malleable and offers total control over any AU and VST plug-in in any DAW. Can you ask for more than that?

There are a few niggles. I’m spoilt by reviewing some damn fine keyboards with some damn fine screens, so this one is a bit underwhelming. It’s also the case that some of the installation steps you have to take to get everything running do seem like one too many – but don’t they always? Otherwise, T4 can easily give the bigger boys of NI and Akai a run for their money, as software takes yet another great leap from your computer to your hardware.

T4 is a bit of a surprise, if I’m honest. It takes that whole ‘turn away from the computer and use software as hardware’ thing I first experienced with Komplete Kontrol and shakes it up a bit. First up, you get great DAW integration and secondly, any AU or VST can run in Nektarine in your DAW whether previously compatible or not. Add the price in and it’s a very good buy.