The software behind the innovative MiMU Gloves is released with expanded input device capabilities and a phone app to bring gestural control to everyone, with or without Gloves. 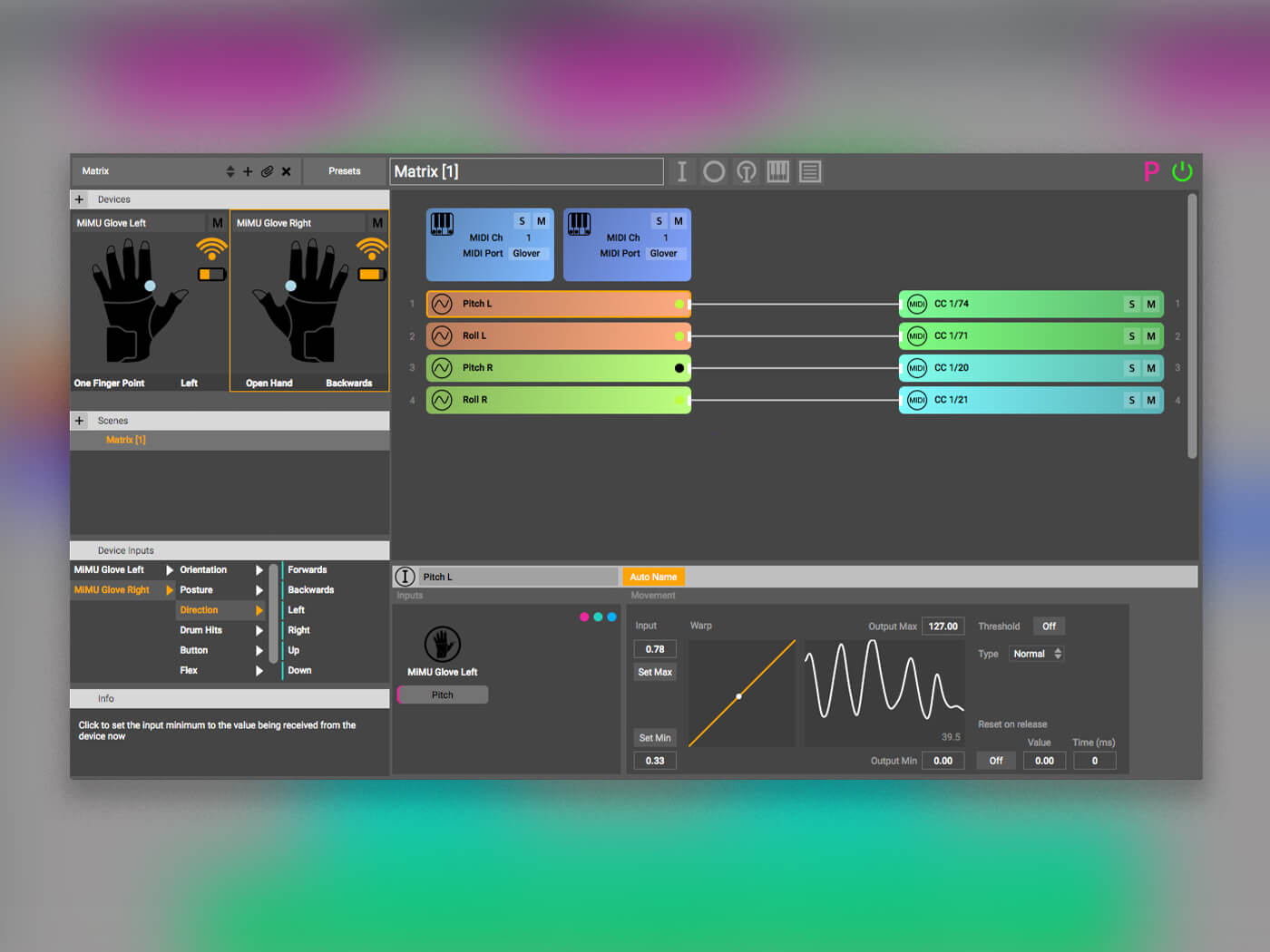 ⊖ You will want to try the gloves

The distinctly niche MiMU Gloves have spawned a control application with a broad appeal across disciplines, from studio to stage, and at a fair price to boot.

Having developed a mapping system for their wireless performance gloves, MiMU has now released that software system into the wild for use with other networked input devices, including the iPhone via their free Gliss app (Android version to follow). Leap Motion and OSC devices are supported as well as the BBC Micro:bit, which opens up a world of affordable experimentation and application. Glover outputs MIDI and OSC to any application that can listen. For instance, Glover comes with presets for Ableton and Arturia Analog Lab.

The interface is kept simple in shades of grey with colour coding options for mapped elements as you build scenes. These ‘scenes’ – entire control maps from input to output – can operate concurrently or exclusively and be collated into performance arrangements with embedded commands to load other scenes. An auto-load function for external files allows integration for related performance apps, such as Ableton Live. As with the mappings themselves, the arrangement aspect of Glover can be as simple or complex as the user desires.

To build scenes, you can drag inputs from a selected device, such as a slider within the Gliss phone app, and drop them into two areas. The first is the main mapping area, which interprets the input as an initial control. The second is the edit window below, which uses the input to augment other existing inputs.

Though a single device input can be wired to a single output (a single movement can map to a single MIDI CC), Glover’s real power is in combining multiple inputs to produce many output messages for complex control. These can include simultaneous MIDI CCs, program changes and OSC commands.

Inputs are colour-coded to delineate functionality across three categories: movement, event and qualifier. Movement covers controls such as sliders or pitching/rotation of the phone/glove, while events are the instantaneous hits, from drum hits in Gliss to the wrist flick of a MiMU glove. Qualifiers combine with movements or events to produce the desired input, such as a button press that allows a particular motion to send its data.

You can tailor inputs through various parameters, from value ranges and slopes for movements to trigger/toggle/gate options for events and qualifiers. The combination possibilities are endless, but never overwhelming. The neat mapping window layout can accommodate complex scenes without descending into modular synth style rat nests. The output mute/solo buttons become essential to trace data flows during set up, as do the input activity indicators.

Accompanying the wired control elements are two musical tools. Chord Machine holds 12 individually triggerable chord slots, each programmed via a piano keyboard with velocity and note spread (up to 300ms between notes ascending). Note Matrix also presents a keyboard where you can select notes and sweep through them with a movement input. These are both excellent additions, especially for setups and performances where an instrument interface, such as a keyboard, is not practical or desirable.

Glover is a remarkably complete package that is both easy and pleasurable to use. Though the MiMU Gloves are the starting point for Glover there is a vast amount to get out of this control package with Gliss and Micro:bit, both of which I have used to great effect. I’ve tried the gloves and can attest to their genuinely unique excellence, but that’s a whole other story.

This is just the start for Glover, as there will surely be additions on the input side as new devices are developed. It’s hard to think of anything missing from the control and output sections, but MiMU will surely find something to expand this impressive application.