M-Audio is giving the Keystation 88 a third outing as a lighter, more space-efficient USB-MIDI controller. Is it still the bang-for-buck beast of before? 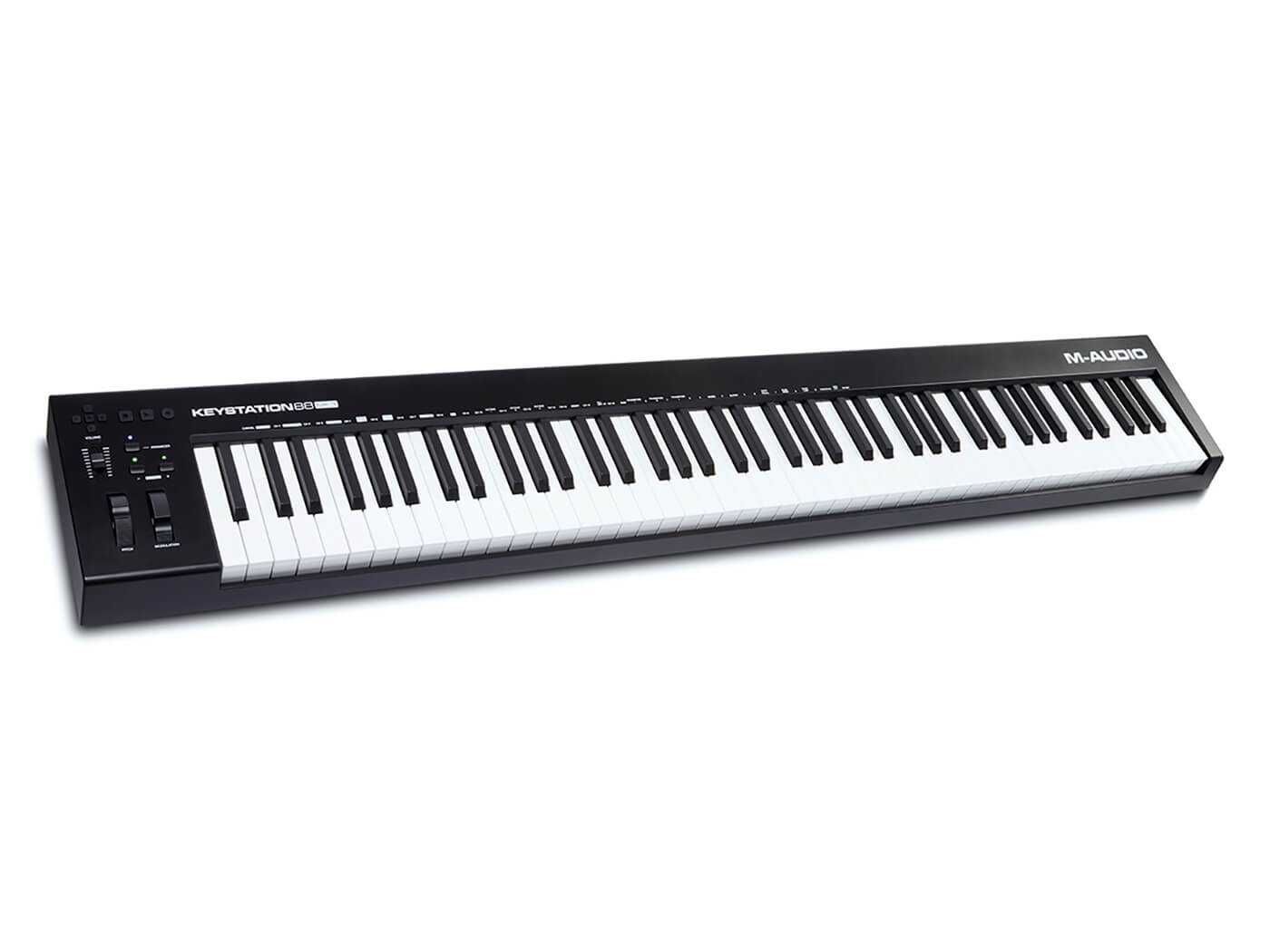 M-Audio can release a third version of the Keystation 88 because it is popular, particularly due to its value for money. This has not changed, though the controller layout has, and for the better.

So you want a full piano-sized set of keys without shelling out hundreds? The M-Audio Keystation 88 Mk3 may well make the smallest dent in your wallet, but will it satisfy your compositional, recording or performance needs? The previous versions have been a staple of audio setups, professional and otherwise, and to make them even easier to fit into desk workstations M-Audio has shaved a good few centimetres off the depth and height of the keyboard in this iteration.

Though its predecessor was hardly a challenge to stands or desks, the Mk 3 is now almost 1.5kg lighter. This revision represents more of a rearrangement than a redesign, the most significant aspect of which is that all the controls are now situated on the left hand side; previously the transport/DAW buttons were housed away from the other controls on the upper right hand side. The flush-mounting for the pitch and mod wheels has gone, leaving them easier to operate, though at the same time making them more prone to damage. 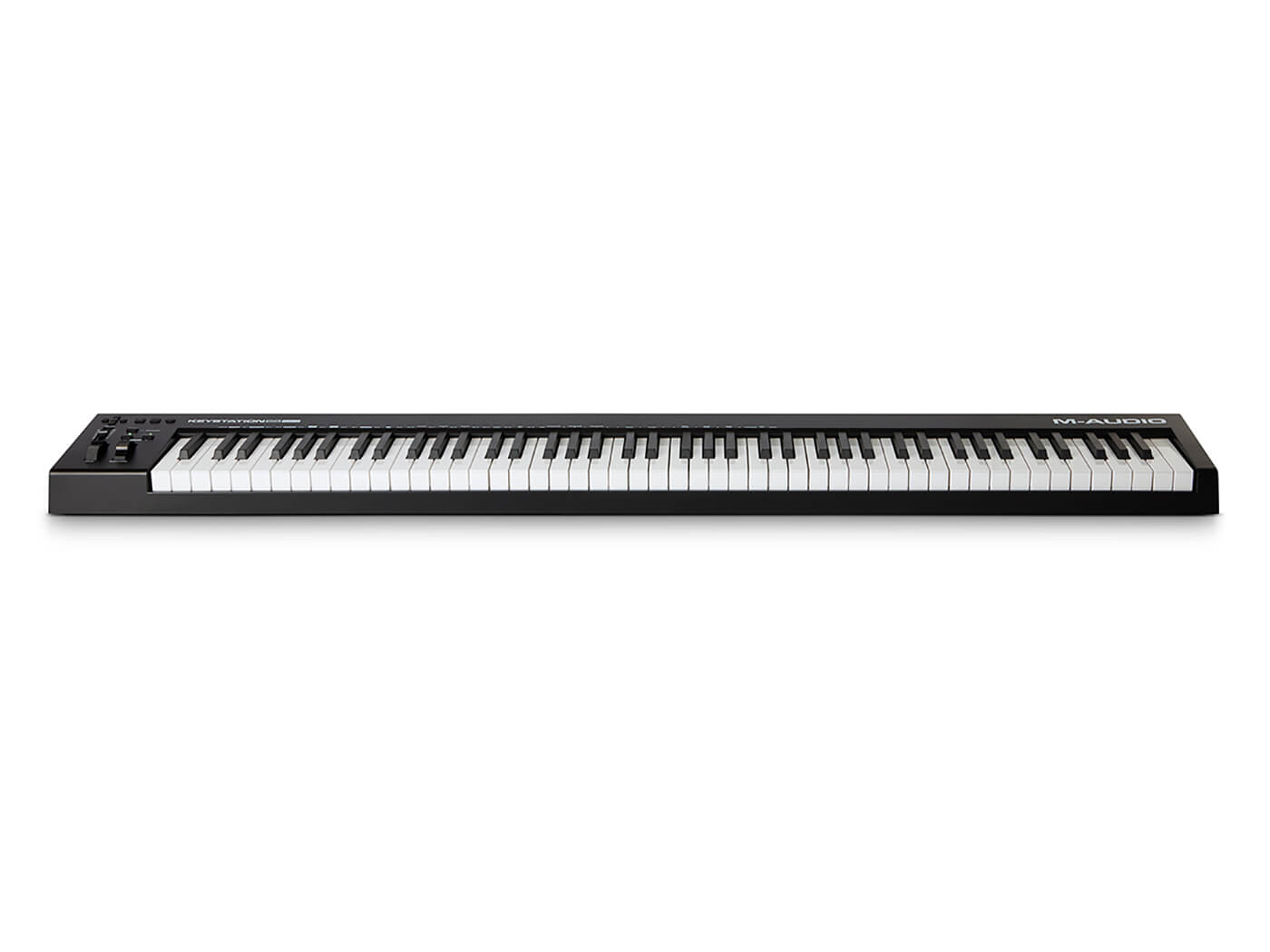 The connection panel remains as was, with MIDI out, USB, two 1/4-inch sockets for sustain and expression pedals, a Kensington lock slot, an on/off switch and the 9V DC power supply input. A USB cable is included for power and MIDI, though a 9V DC supply is not. If you’re specifically using only the 5-pin DIN MIDI, you’ll need to buy or dig out a 9V centre-positive PSU. However, for most use cases, this is less an annoying omission and more a relief not to have to dump another power supply in a drawer.

The all-plastic construction is perfectly solid, however light, and doesn’t flex much when mounted on a stand. It’s also fitted with rubber foam feet for a desk-bound life.

The three editing buttons are hard plastic while the eight transport/DAW buttons are rubber. The edit buttons, Advanced and Octave Up/Down, have associated LEDs that indicate various states from current octave centre to DAW control type. All the editing functions are labelled on their corresponding keys, which cover about half the keyboard, and five minutes with the manual is enough to digest most of what’s needed to assign CC controllers, send bank/program changes and transpose the MIDI notes. A more comprehensive system could be employed, perhaps with a display, but for the money there is enough here to get the job done with the minimum of fuss.

The USB side of things is the standard plug-and-play routine with MIDI showing up as ‘USB MIDI’ and the transport control side labelled ‘Transport’, which really helps when routing within a DAW. The transport controls consist of record, play and stop as well as a four cursor and centre select/shift button set. These controls can be used with Mackie HUI, Mackie Control or MIDI protocols, though the manual doesn’t list which CCs are sent with the latter (recording their output will furnish you with the answers there). I had the Keystation up and running as a keyboard and controller (transport and zooming) quickly in Steinberg Nuendo, and found it no effort to assign the mod wheel and slider, which is nominally labelled ‘Volume’, to any MIDI CC I needed at the time. Again, nothing fancy, but minimal fuss. 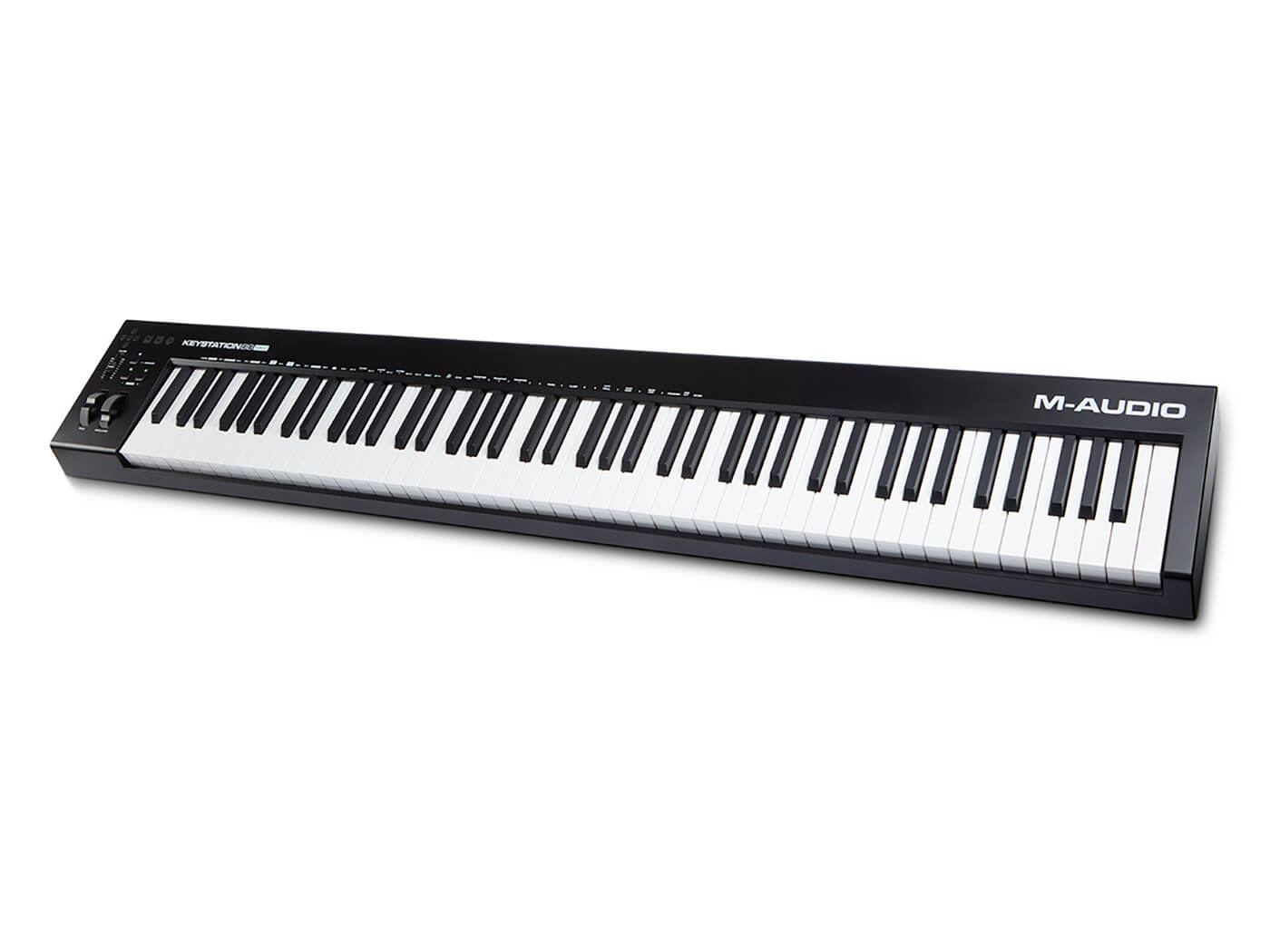 Keystation 88 mk3 is semi-weighted, meaning there are weights added to the spring mechanism to provide a more piano-like action, but requiring less force to press and a faster spring back. This is a compromise for those wanting a decent keyboard experience but who may also use the keyboard for percussive playing, whether that’s drum programming or punchy synth performance. It is, of course, cheaper to produce and weighs considerably less than hammer-action keybeds. The Keystation has a good balance of firmness and fast spring return, with not too much lateral movement in the keys, a problem often found in low-cost keyboards. The playing feel is better than expected for this price and the velocity sensitivity is well-calibrated, which is especially useful with virtual pianos, acoustic or electric, where dynamic response is a fundamental component. The keys are quick enough for playing in drum rolls or getting especially funky with a clavinet, and the construction appears solid enough to take years of this kind of action. There is no option to alter the velocity curve, but if it doesn’t suit you then most DAWs and virtual instruments include options to this end. Unsurprisingly, at this price, there is no aftertouch, mono or poly. 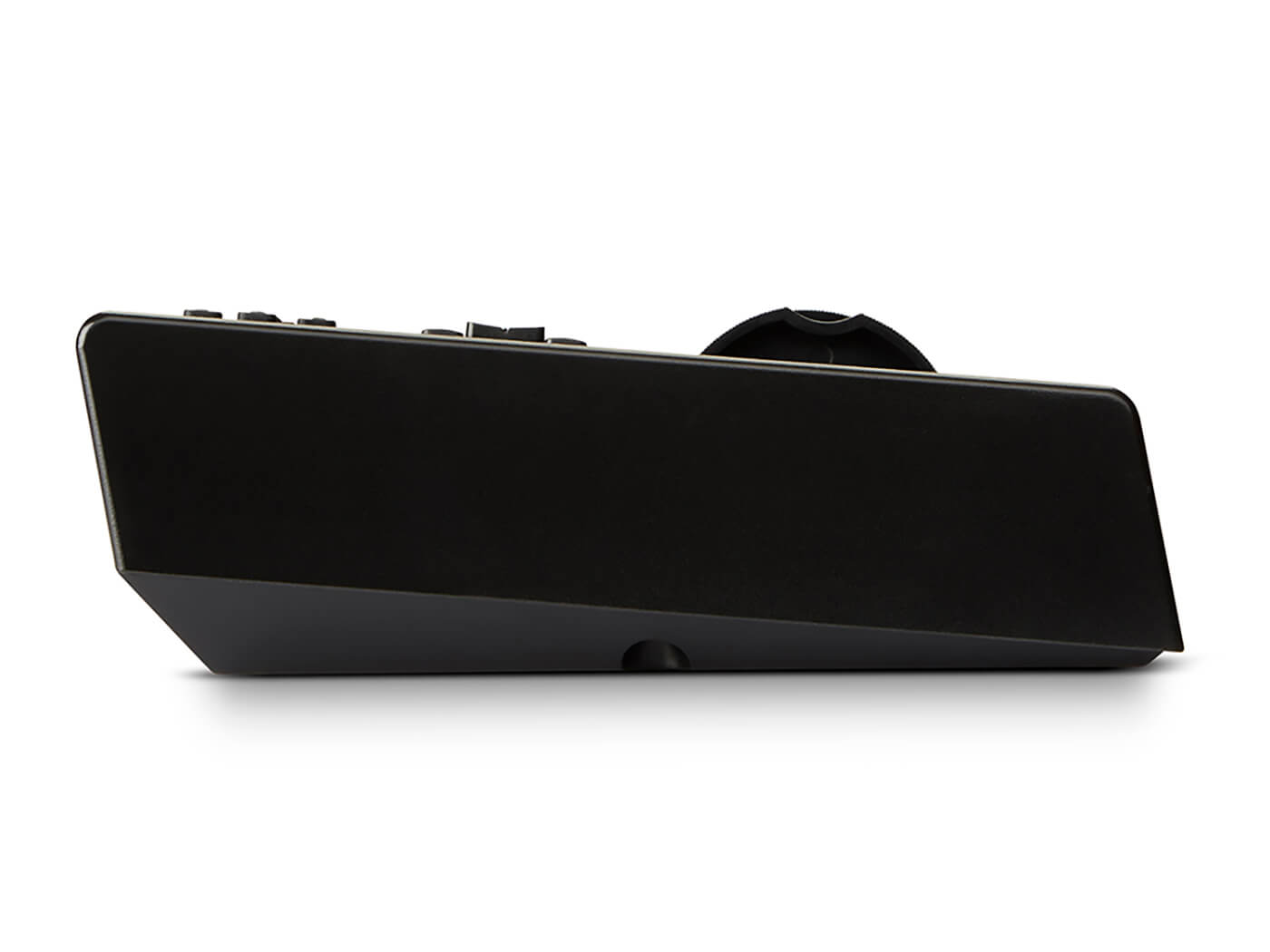 Though the Keystation is not adorned with rows of knobs and faders, there is enough that thoughts of buying secondary controllers can be parked, at least for a while. Including the expression pedal there are three assignable controllers to hand – and foot – at any one time, and reassigning them is quick and painless. However, in a performance setting, I’d want another way to switch banks and programs quickly, especially when the lighting isn’t great. For the desktop programmer, though, there’s enough to be getting on with.

The controller keyboard is bundled with a sizeable software set. For DAW and performance there is Pro Tools First (M-Audio edition) and Ableton Live Lite, so two industry standards in slightly limited formats. There are sample packs for the (freeware) MPC Beats and five virtual instruments from AIR Music: Mini Grand, Velvet (electric pianos), Xpand!2 (synth), DB-33 tonewheel organ and the Boom drum machine. There are also introductory piano lessons from Skoove and Melodics.

The Keystation clearly leaves the bells and whistles to its more costly competitors and focuses on the essentials. The keyboard is light and not at all flimsy, so it may well suit a performance setup where weight is an issue, but most units will likely make their way onto desks under monitors screens for producers, sound designers and composers alike. The weighting and velocity sensitivity is well balanced for a range of players that don’t want the expense or expressivity of a hammer-action keyboard. Keystation 88 Mk3 gives you a whole lot of keys, a basic MIDI controller set and the key components of a DAW transport, and it does so for a very good price.

Are all those keys really necessary? For certain users, yes. If you regularly perform or compose with virtual pianos, there is nothing like having the full 88 keys. Few instruments sound good over seven octaves, with the exception of the piano, church organs and their electric brethren.

For media composers and other producers, the Keystation 88 Mk3’s size also permits splitting multi-instrument setups into an octave or two so that they can be quickly accessed or played simultaneously without having to switch between sources. Having beats and bass at one end with synth or sampler patches higher up will only speed up composition. 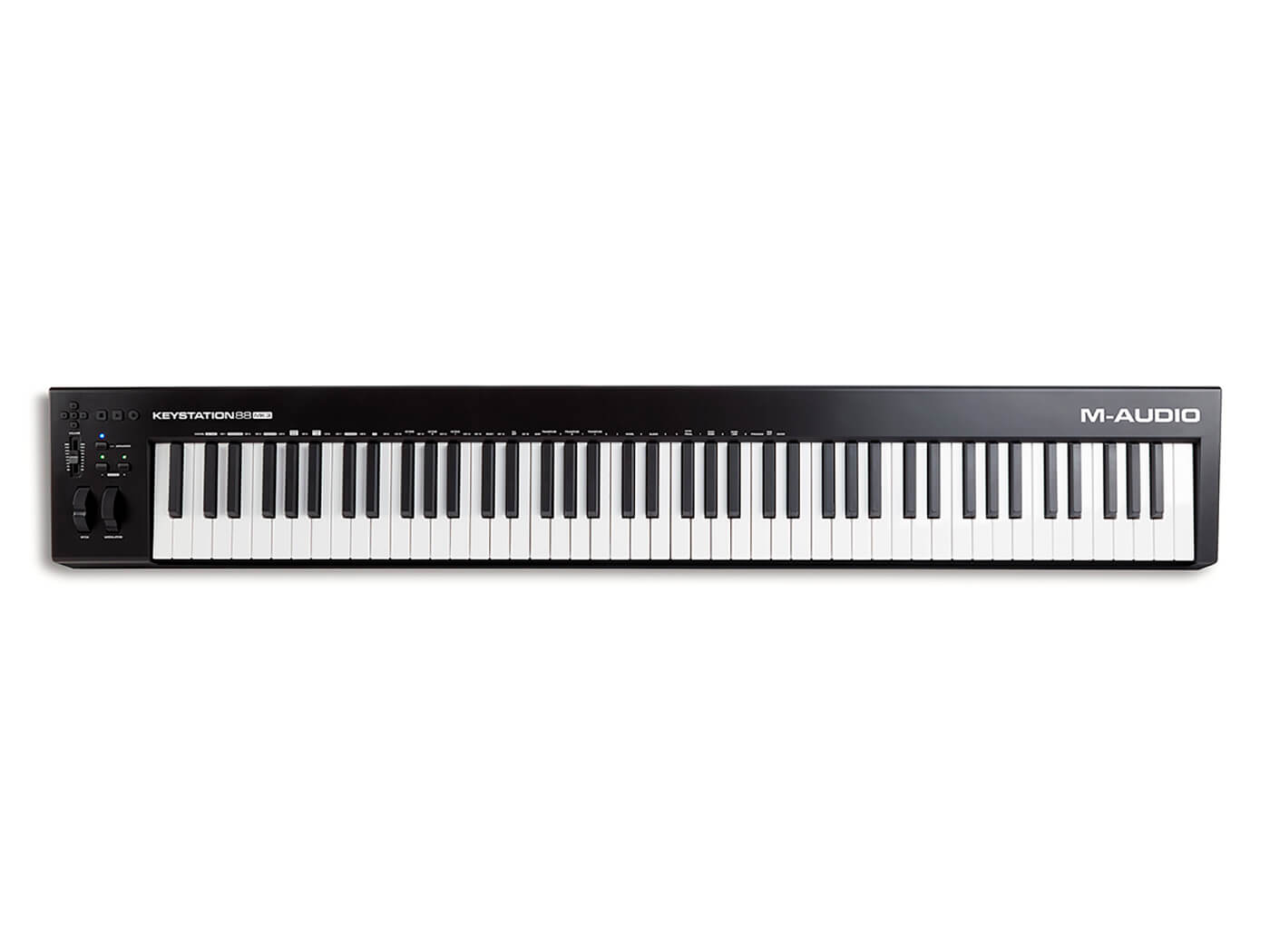