Swap out touch-sensitive playing surfaces in seconds for a whole host of performance options. Is there anything the Joué Play can’t do? 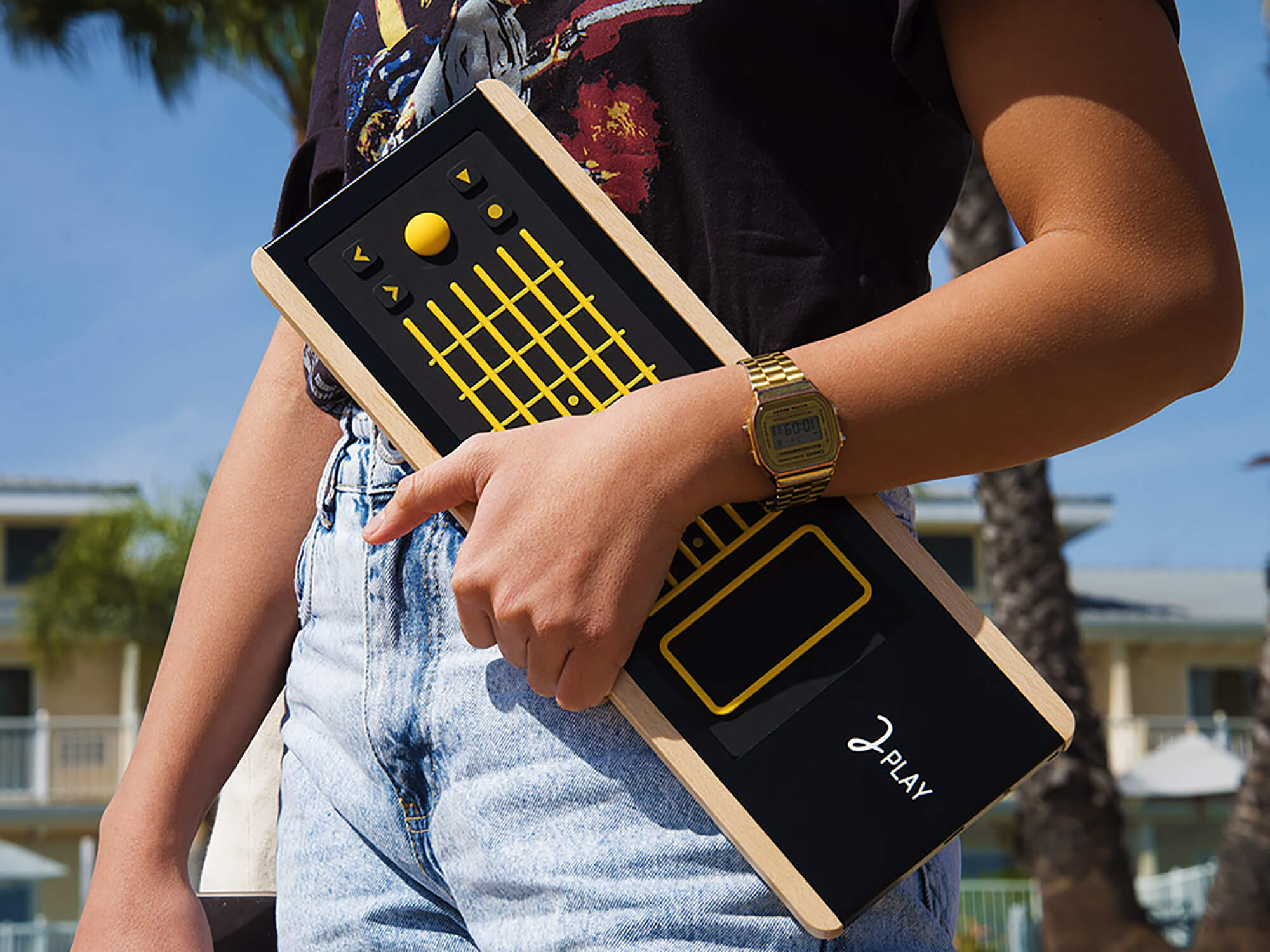 ⊖ Navigating the app could be a little easier

Music technology designers put a lot of effort into creating novel MIDI performance experiences for their users. These can take the form of more conventional keyboards and pads, or sometimes touch systems, like those from ROLI and Sensel. Joué’s new Play controller, several years in development, falls into the latter camp and is unique in how it combines physical and virtual components. The MPE controller is accessible to beginners but is a powerful tool to help experienced musicians create new patterns, with an additional editor app for deeper control.

The Play board is constructed from beech and metal. It feels gorgeous but it’s heavier than it looks – though this gives it a reassuringly pro-grade feel. At one end is a single USB-C port that carries power to the unit and data from it, and in the box you get USB-C and USB-A cables as well as a USB-C to Lightning, covering pretty much all computers, tablets and smartphones.

Into the tray area, you drop one of the four pads – guitar, piano, keys or drums. These come in two colour schemes and are made of soft rubber, with the board itself having pressure sensors inside. Download the free Play app for Mac, PC or iOS, and when you connect the board to your device, it loads up the relevant set of instruments for the pad you have fitted. The app allows you to easily trigger and layer sounds but, of course, the instrument works with any MIDI-capable software.

Artist sound packs are available for a small fee but each pad comes with its own set of around ten instruments. For the guitar and drum pads, these are a selection of different styles, and for the piano and key pads, there are pianos, synths, strings and the like. You can select a sound in the app and load multiple sounds per project, which appear in a circular arrangement. You’ll need to attach the relevant pad to enable the different categories of sound and the app actually supports up to eight boards being connected, should you want to collaborate in real-time. 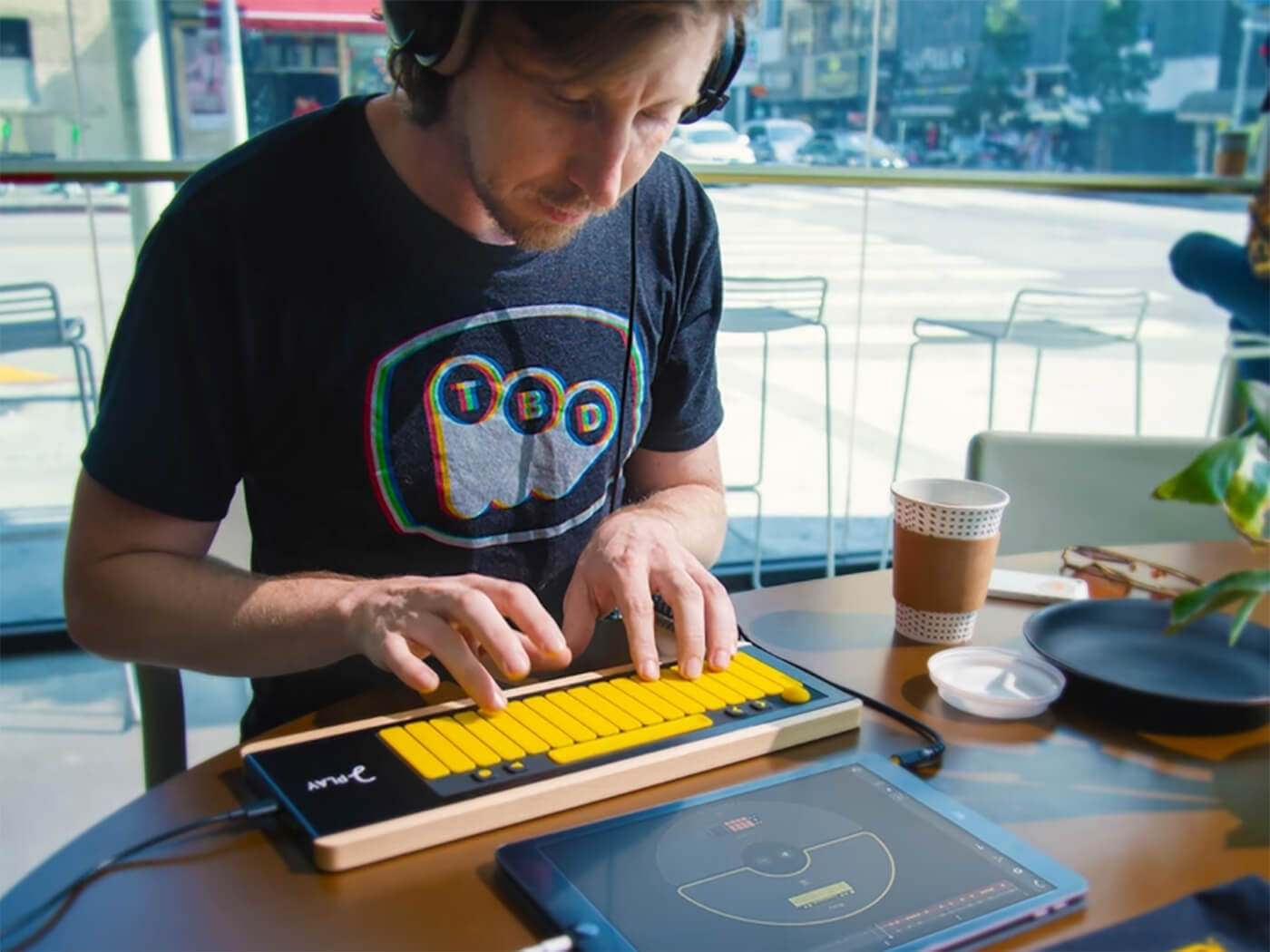 You play each board according to its design, so the most conventional is the piano, closely followed by drums, then keys and guitar. Each one has play and record buttons for the app as well as octave up and down buttons for quickly extending the range of notes available. The two keyboard pads have a long strip, and the drum and guitar pads have a larger XY area; these are all used for modifying sounds or effects in real-time. The keys pad is particularly interesting because it lets you press and hold a note, then run up and down the other keys to create glides, sweeps and other cool effects. 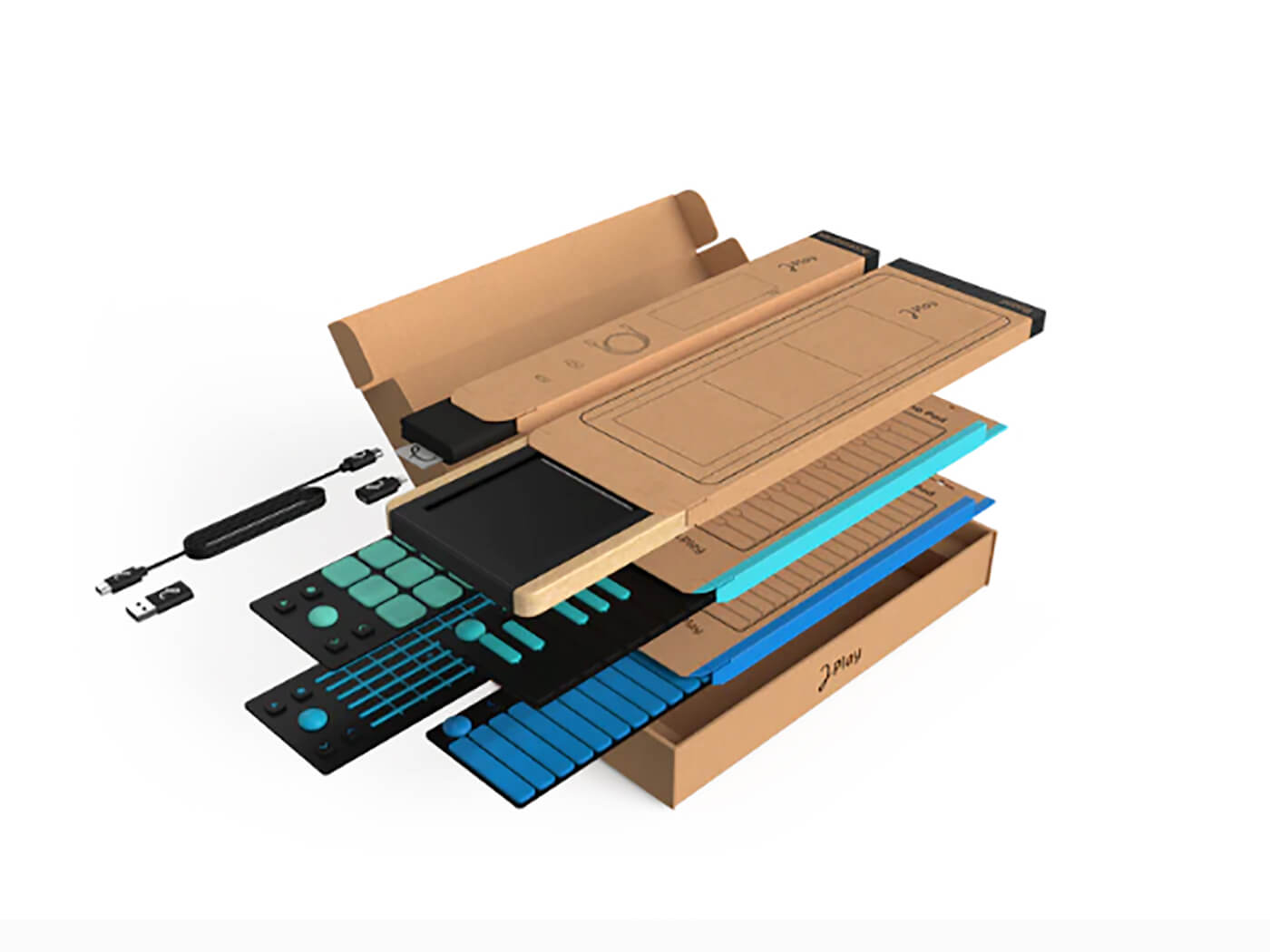 Joué wants Play to be simpler than other MIDI controllers, so you don’t get visual access to any specific parameters – it’s a case of playing with the pads and seeing what changes. Sometimes Movement adds reverb, sometimes it changes a sound’s attack, and other times it introduces crunchy distortion. The domed button on each pad also varies by instrument, sometimes adding vibrato, sometimes changing pitch. It’s actually a nice and immediate way to create without pre-planning anything. Sometimes the effect is minimal and can add some subtle flair.

The playing surfaces are highly sensitive to touch and you can get a much greater dynamic response than you would expect from something with no moving parts. Rhodes patches bite hard when you hit them or swim gently when just touched. The piano notes are just about big enough for accurate playing and the key and drum pads a bit easier. The guitar pad is interesting, especially for non-guitarists, giving you a whole new way to play guitar parts. It’s not really like playing guitar, but it’s definitely original. 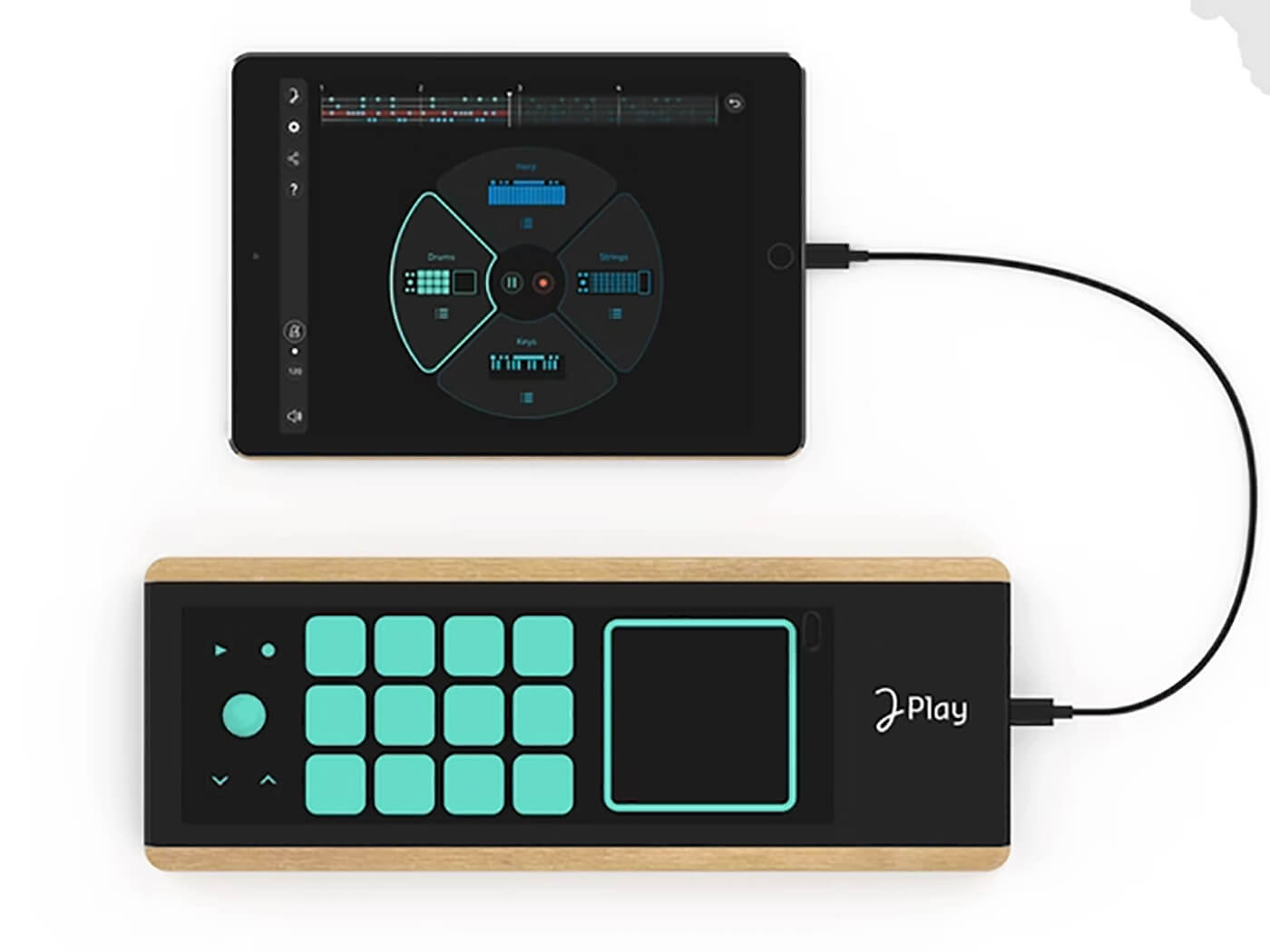 The sounds are pretty impressive, especially when you start to jazz them up a bit with the effects sliders. Usefully, the actions you perform on the effects are recorded as part of the clips in the Joué app as automation, which makes it easy to spice up your loops and make them more intriguing. The app allows you to add multiple parts of different bar lengths and quantise or delete the recordings, though not edit in any greater depth than that. Combined with the ability to layer sounds, you can make multi-part, multi-instrument projects and then export them as audio mixdowns, stems or MIDI files.

Play does function as a general MIDI controller so you can hook it up to anything – its use of USB rather than routing via a MIDI interface is a bonus, as is its ultra-portability. It’s perfectly fine as a basic controller, but when unlocked to the Pro version ($295/ $345 with two or four pads) you can seriously get into it, customising every aspect of each pad and enabling MPE for other apps and hardware. 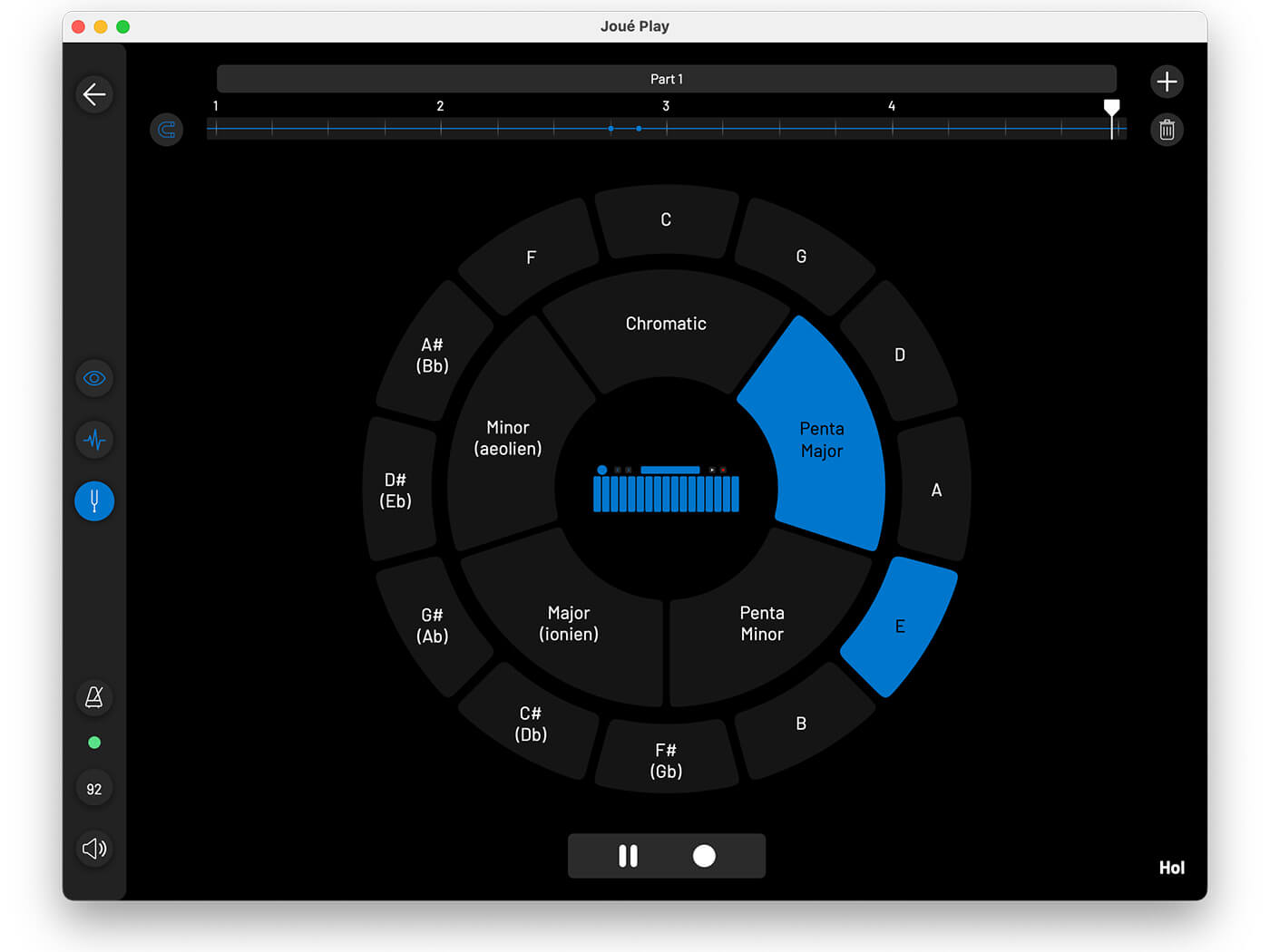 With an increasing number of DAWs and instruments supporting MPE, which lets you control more than the standard MIDI controllers allow, it’s one of the few hardware controllers that can do it, and also one of the most affordable.

The Joué Play is an intriguing creation. It feels like a premium product with an amazing finish and will definitely start conversations wherever you pull one out of your rucksack. For beginners, it’s fun and rewarding to play – the developers mention teaching music to kids as one application, and that’s certainly something it’s primed for. The app works well though it could use some refinement in terms of navigation. It’s not always clear where to find certain tools, what section you are currently in or how to get somewhere else. Almost all apps are works in progress, though, and this will likely be addressed in updates.

For more experienced players, there’s the MPE functionality and this is one of the most affordable ways to get into the MPE control world. On another level, it’s also just fun to play instruments in a different way, moving notes and controls to see what happens in a way you wouldn’t do on an 88-key piano, for example. The results are often surprising and useful, and Play is a fun way of helping players of all levels generate new musical ideas.