Getting creative with Eurorack modules can be a time-consuming business. Thankfully, Arturia has taken some key steps to ensure the whole process is much more efficient. But does this keyboard controller work? 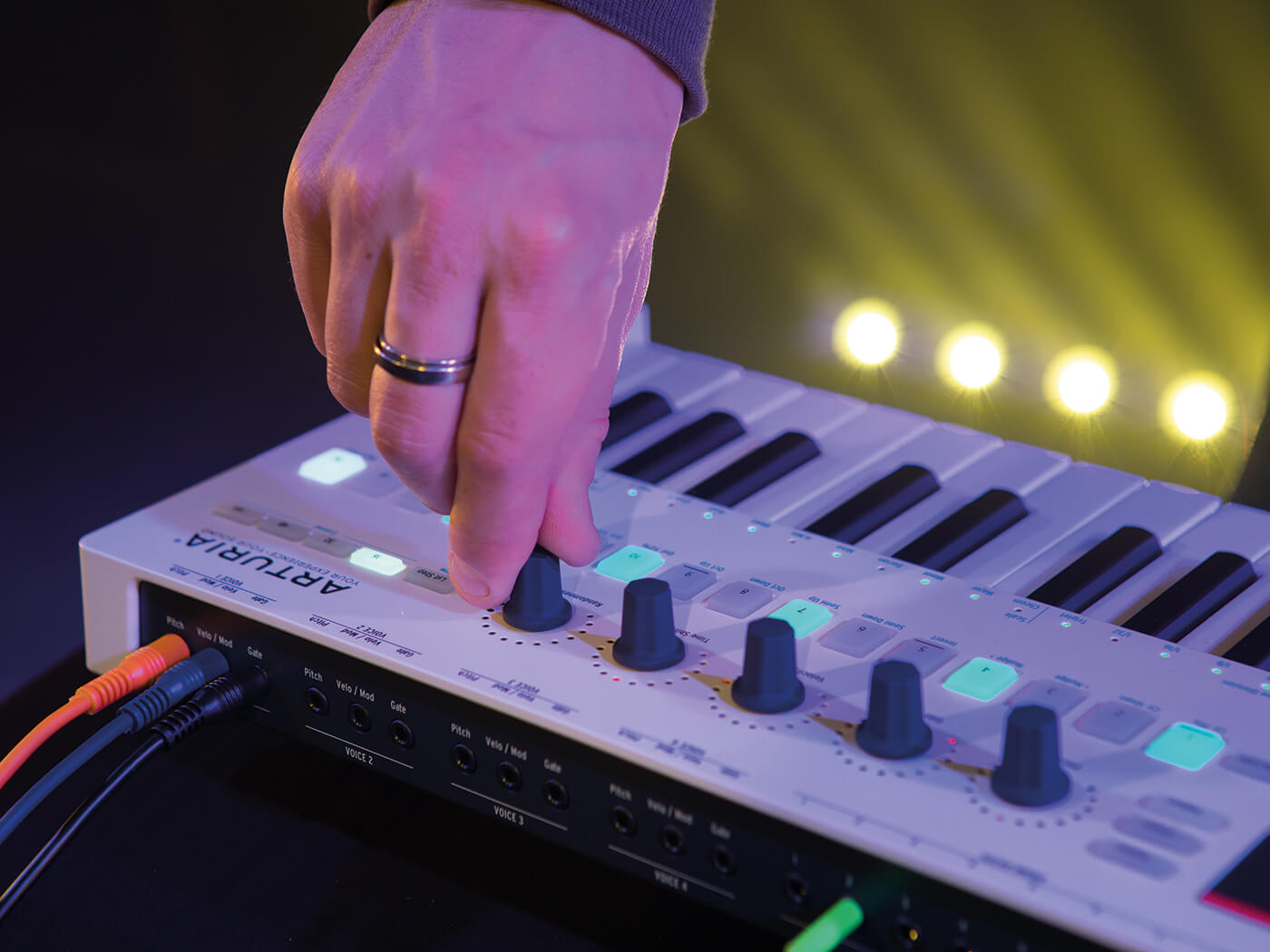 Over the past few years, Arturia has provided us with hardware synthesizers big and small, plus drum machines, plug-ins, audio interfaces and MIDI controllers. But it’s with CV/gate connectivity that the French firm has arguably had its biggest impact, giving both synth and Eurorack owners the opportunities to connect vintage devices and contemporary systems, via DAWs, plug-ins or full-on Eurorack systems.

It seems like a logical step, then, for the Grenoble-based company to combine some of its best sequential elements from recent years inside a single device, while pushing its usability to the max. Step up, the KeyStep Pro. 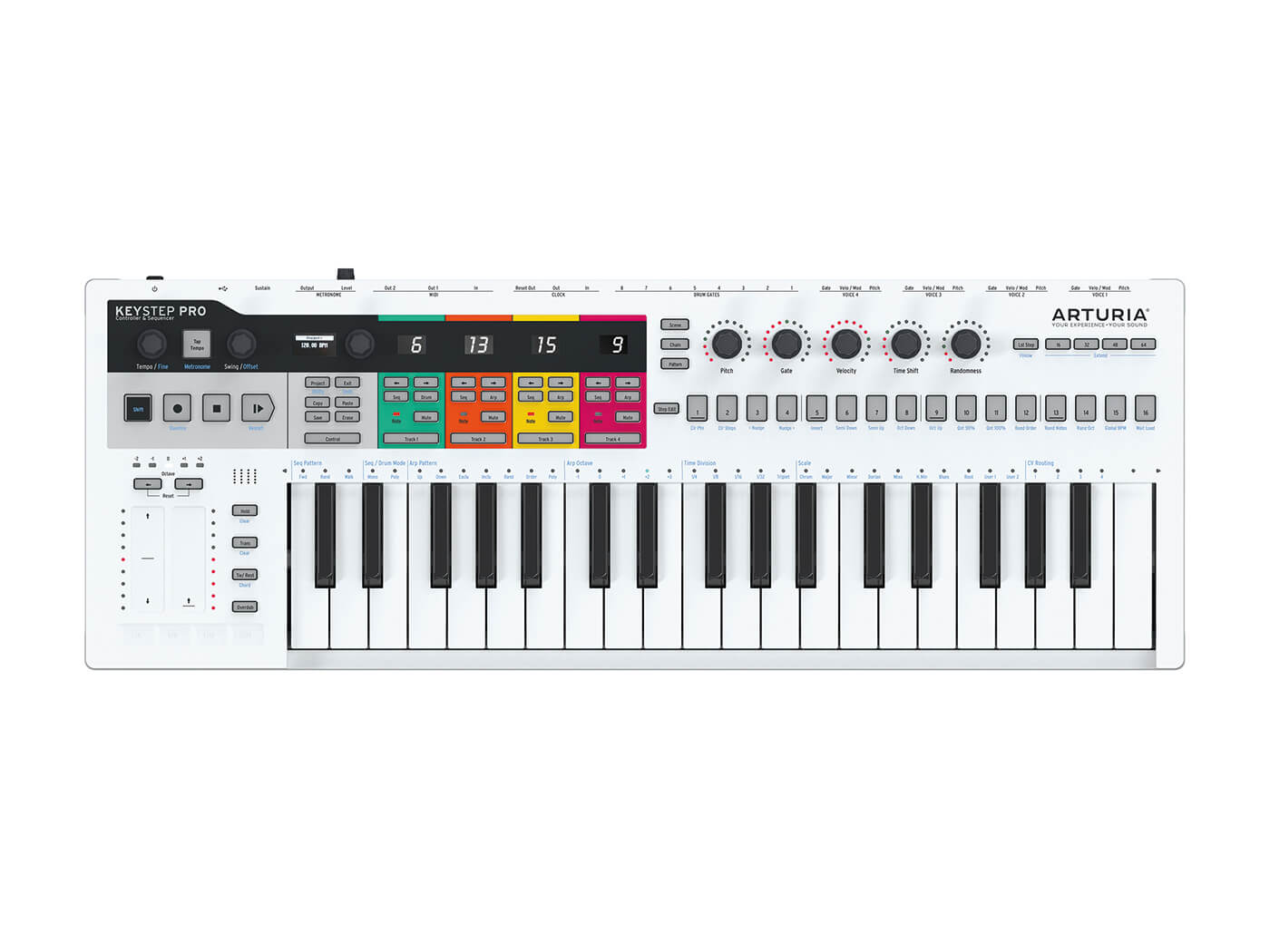 The KeyStep Pro is familiar in styling to previous Arturia products. Its central track-selection area features four coloured tracks to help guide your way. To the right of this, you’ll find 16 step buttons that can be linked together to provide up to 64 steps in a single pattern. Above, five rotary encoders provide performance control, as well as the ability to send MIDI CC information. Global elements such as tempo control, octave switching, and pitch and mod capacitive strips are found on the far left, as was the case on some past Arturia controllers.

The 37-note three-octave keyboard boasts a slim-key format. We’re unsure about these miniaturise keys. Given its Pro title, a full-sized keyboard might be more appropriate, especially given that some of the operational elements of KeyStep Pro lend themselves to the full-on playing experience.

With its capacity to record polyphonically and its sustain-pedal input (useful when it comes to playing arpeggiated chords), the unit can feel a little cramped. That said, a larger keyboard would surely prohibit the compact KeyStep Pro from inhabiting bedroom-producers’ desktops, likely one of Arturia’s target markets. Plus, thanks to its MIDI input, it’s possible to use the unit alongside a fully fledged MIDI controller.

As fans of the original KeyStep and the BeatStep Pro, we can’t wait to get this new unit wired up – and that’s another area that requires some consideration on the part of users: depending on your Eurorack rig configuration, you may need a lot of long cables. When it comes to making the most of the KeyStep Pro’s four CV/gate connections and its eight gate/drum triggers, your regular Eurorack cables could come up short.

Make sure you have some extended cables to avoid disappointment. There’s nothing worse than getting a new toy for Christmas only to find that you need four double-A batteries to power it and that there are none in the house.

With the basic housekeeping out of the way, getting started with KeyStep Pro is simple and intuitive. Select your track, arm record, and play your desired sequence in real time. The internal metronome sports its own small speaker, which gives you something to track onto without having to set up an external click. The metronome is also equipped with its own volume control, located on the back, next to a dedicated audio output. If you’re playing in a live environment, then, you can happily steer this signal towards your headphones, keeping it audible above your main mix.

Once you’ve recorded an initial, editing comes easy and can be done on the fly in real time. With your pattern looping, entering record mode allows you to alter its existing notes, while the overdub button lets you add further notes to the pattern, which can again be played in real time or step-time. If you’re comfortable with making real-time keyboard adjustments, this will prove an incredibly useful feature. But if you prefer to work in a step capacity, you’ll be pleased to read that it’s equally simple to select steps and play notes in a non-linear manner. Multiply that functionality across the four available tracks and KeyStep Pro’s strengths become clear. 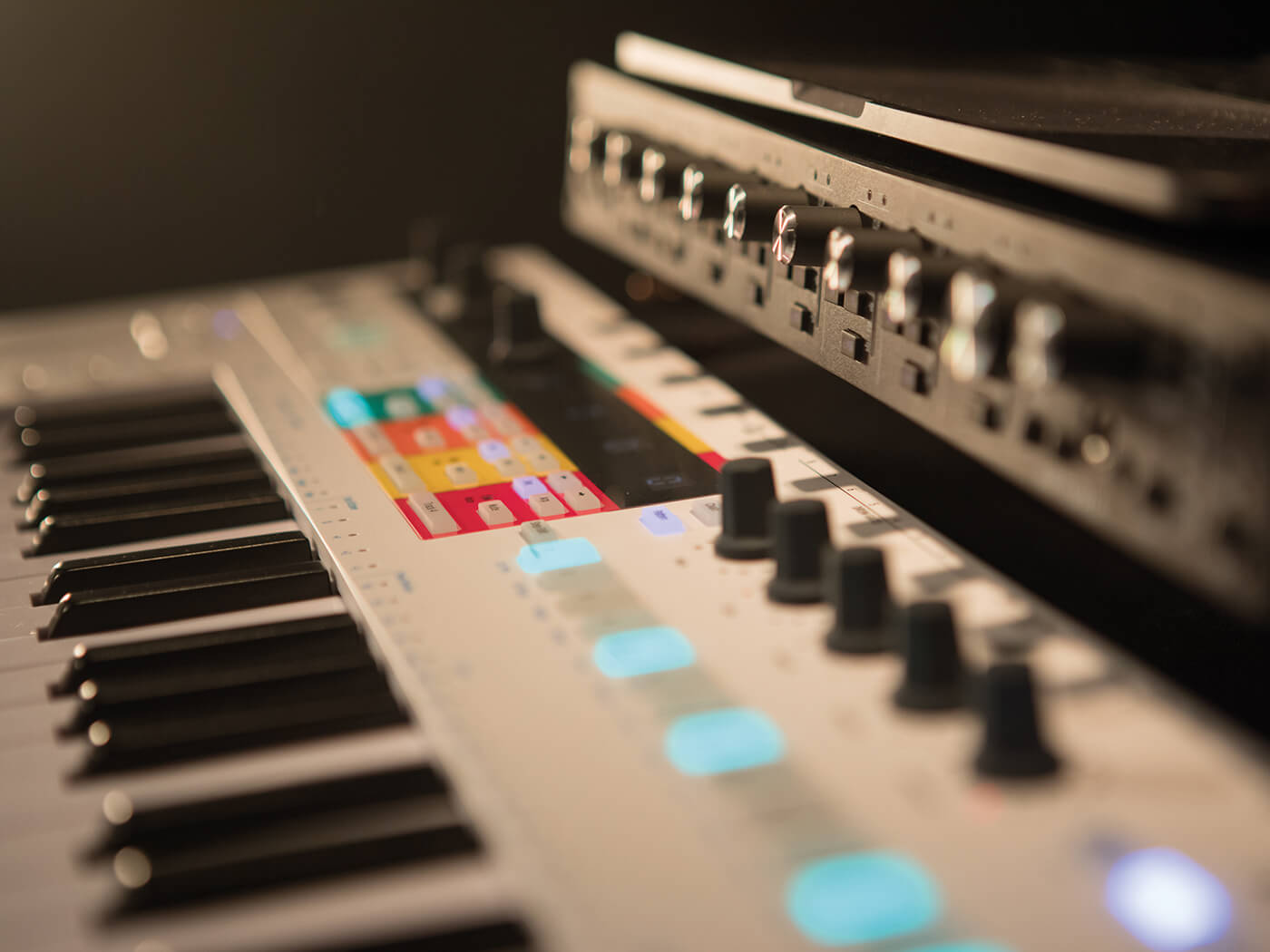 Patterns can be increased in increments of 16, all the way up to a maximum of 64 steps. This can also be done on the fly, with the existing 16-step pattern being copied over as you instigate the extension, leaving you free to add, overdub or alter as you go. It’s also possible to circumvent these 16-step increments and set pattern lengths on a step-by-step basis from one to 64, which allows you to get a degree of polyrhythmic activity going. One of the real strengths of KeyStep Pro lies in the speed and ease with which all these functions can be applied. Creatively building tracks comes quickly and efficiently.

Multi-tracking is of course possible across the four separate tracks, and track one is switchable between regular sequences and drum-trigger duties – just press the Sequencer or Drum button to activate the mode you want. We test the KeyStep Pro with Eurorack Drum modules and, where other such controllers have proved confusing, Arturia’s is the essence of simplicity.

Trigger output one corresponds to the lowest note on the keyboard, with gate triggers creeping up the keyboard in semitones. With each drum addition, the corresponding step sequence illuminates across the step-input section, inviting easy editing in both play and stop modes. In line with its polyrhythmic tendencies, it’s possible to create a specific step length for each drum trigger or track.

Arturia calls this Polymeter, although it’s not so much a change in time signature as an alteration of the amount of steps in each pattern at the individual drum level. It’s possible, therefore, to have a three-step pattern playing against a 15-step pattern, where the basic step unit would remain the constant clock. Regardless of terminology, it’s blissfully simple to create complex and interesting polyrhythmic patterns at the drum level. Add in the additional sequencer levels and Arturia becomes a pattern-based powerhouse.

Tracks two, three and four also offer dual functionality, as they’re switchable between sequencer and arpeggiator styles. In Arp mode, users can use the Hold button to access latched performances. The Arp function will only trigger over a five-octave range though, which is in keeping with the limitations of Eurorack but it also mirrored over MIDI. The Arp function also has some interesting additional functionalities, some of which you can only access through MIDI.

The Poly mode, for example, allows you to play block chords and have them jump around in line with the arpeggiator setting. But this will only work if your connected device is polyphonic. There’s also an option to arpeggiate notes in the order played.

With the Chord Memory function, the KeyStep Pro can memorise a set of chords, which can later be recalled using a single note. It’s also possible to set scale and chordal types, helping you stick to a pre-configured tonality.

Even at its most basic level, then, KeyStep Pro can foster the kind of creativity offered by more modular-based performances. This includes abilities such as the muting and unmuting of tracks, playing arps live, and transposing sequences, along with playback alterations. But on top of these functions, there are also three degrees of pattern randomisation: Forward, for normal playback, Random, which induces a random state drawn from the notes within a pattern; and a riveting new option titled Walk. Walk sees sequences playing almost as usual but then going back on themselves at varying points in the sequence.

It’s a distinctive and fun feature, and sounds like a stutter effect in slow motion. Speaking of stutters, in line with Arturia’s other products, there are four stutter controls on the KeyStep Pro, which reside beneath the pitch and mod controls.

The KeyStep Pro can also help you create more structured tunes and compositions via its Chains and Scenes. These provide a useful way of saving elements that can be compiled into a complete project. Using Chains, you can link up 16 patterns together to create whole songs or split your set into sections.

Scenes can be used to swiftly switch between sets of sequences, and Projects allows you to load, duplicate, edit and save your work in the onboard memory. You can save up to 16 Scenes within each Project, and you can save 16 Projects too. That’s a considerable amount of cabinet space that it’ll take some time and effort to exhaust, and it’s this that really encourages users to set up the KeyStep Pro as their central performance hub.

The KeyStep Pro is clearly a very capable device. It can control your CV/gate devices, while providing velocity control of anything that accepts a CV input within your rig via an additional CV output per channel. It plays nicely under synchronisation, providing clocks outward and inbound over MIDI, USB and through Eurorack compliant clocks, which can also be divided onboard.

It plays well with vintage kit, including the likes of the TB-303, via Sync 24. It does everything you’d want it to – and in a remarkably accessible way. Organising the hierarchy of Projects will take more time and thought but it’s worth the effort, as this function will prove particularly useful for those with broader compositions in mind. We had an enormously enjoyable time with the KeyStep Pro. It responds to ideas quickly and easily. For anyone with Eurorack kit, it’ll practically pay for itself. 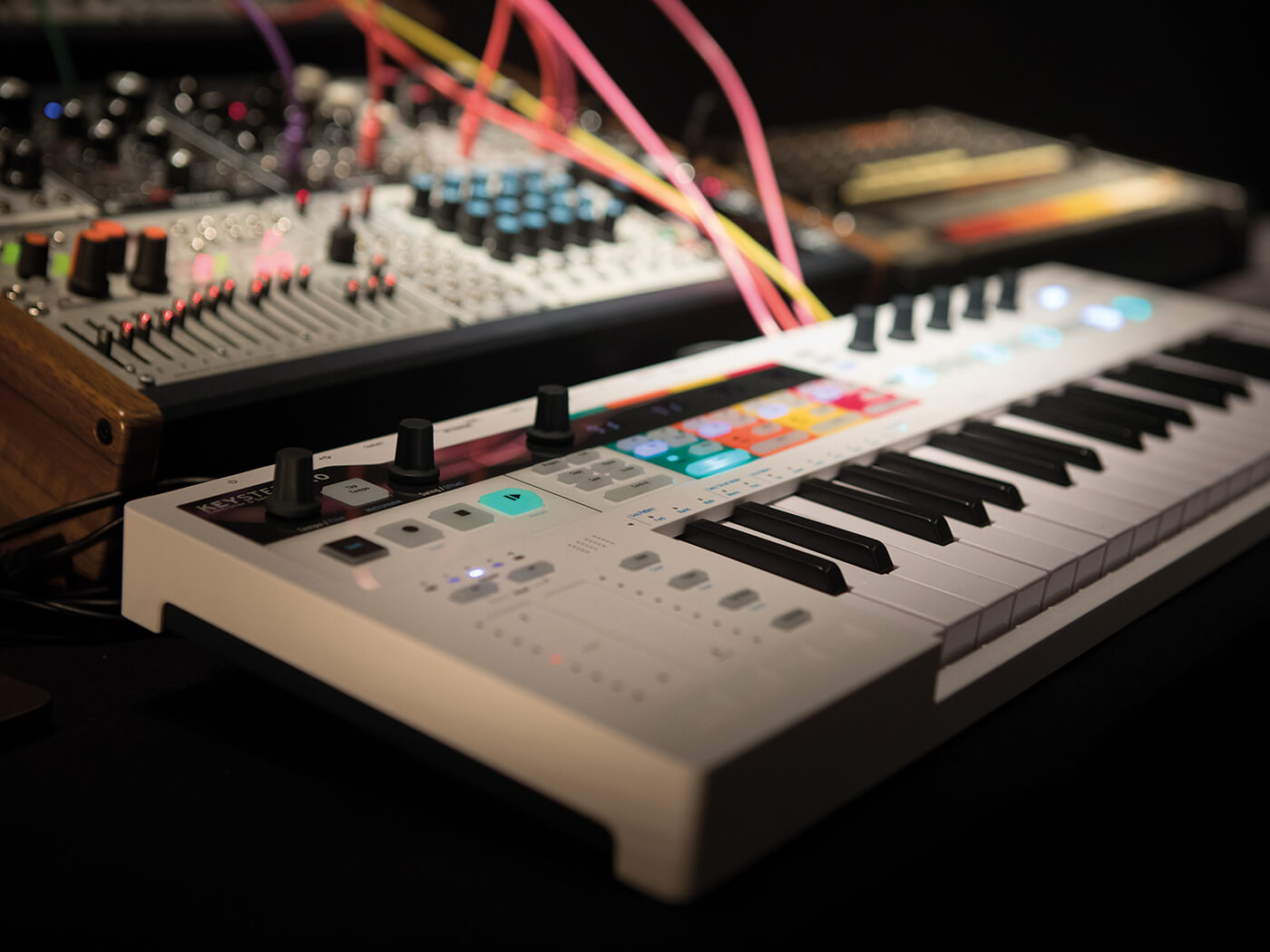 In many respects, the KeyStep Pro is a culmination of all the impressive traits Arturia has pulled together across its product range over the past few years. The accessible nature of this unit will appeal to many, while its capacity to build song formats through patterns and sequences – which can be tinkered with on the fly – makes it particularly well suited to controlling Eurorack systems, as well as other devices.

As a hub, it should integrate splendidly with your DAW, computer-based plug-ins, other CV-based equipment, and even good old MIDI modules. Arturia has all the bases covered. The standout feature for us, though, is simply the speed at which the KeyStep Pro allows you to get hooked up and get going. When a composer or performer’s ideas start flowing, it’s often crucial to get them down quickly. This product can help you do just that, without you having to stop and faff about programming step-based notes. It should suit anyone with a Eurorack system and appeal to those who want to haul it into the live-performance sphere. 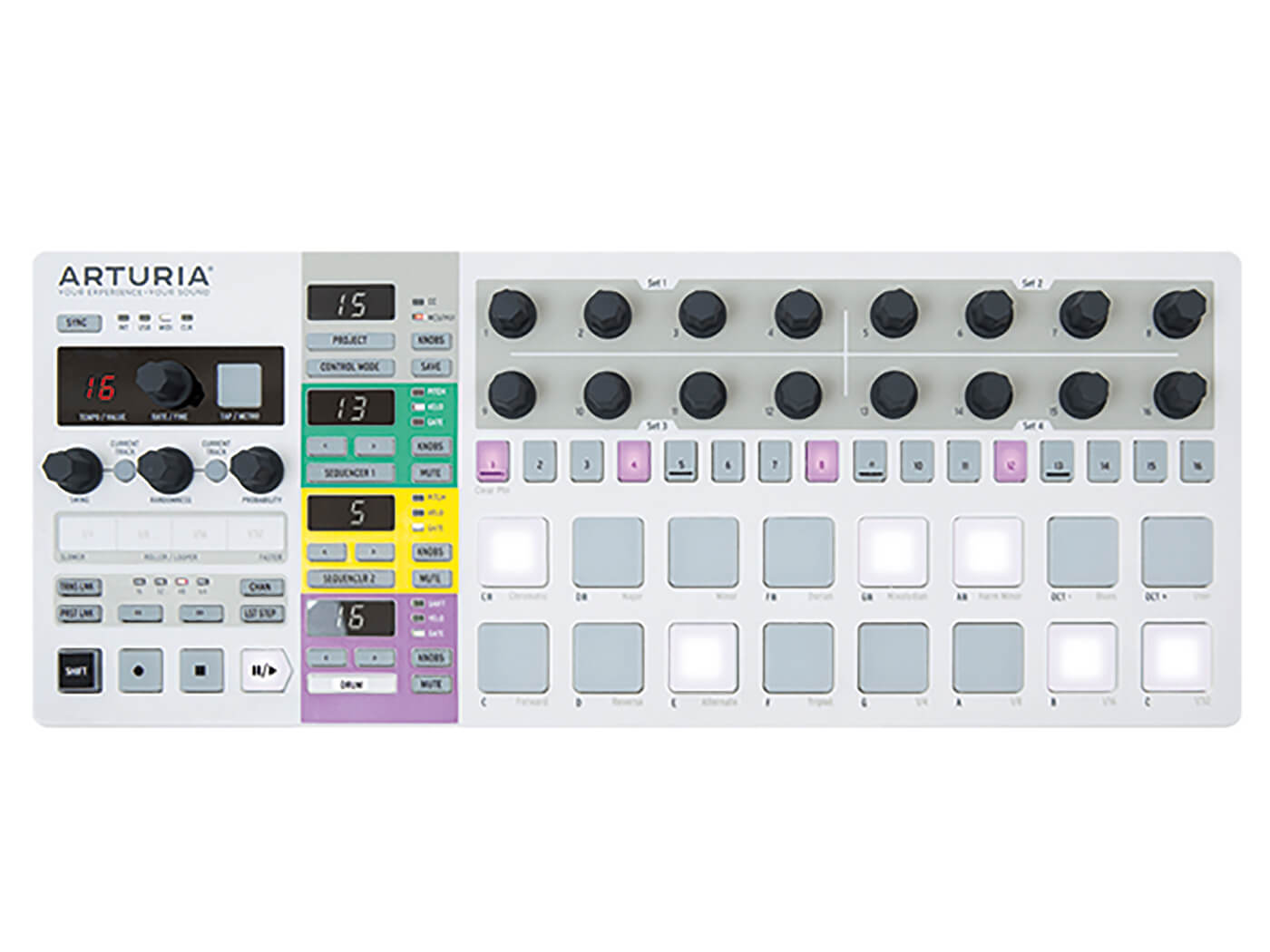 Now effectively the KeyStep Pro’s little brother, the BeatStep Pro still has much to offer – including drum triggers and two sequencing tracks – and does so at an attractive price. It’s ideal for smaller Eurorack rigs and can similarly act as a hub for MIDI and more. 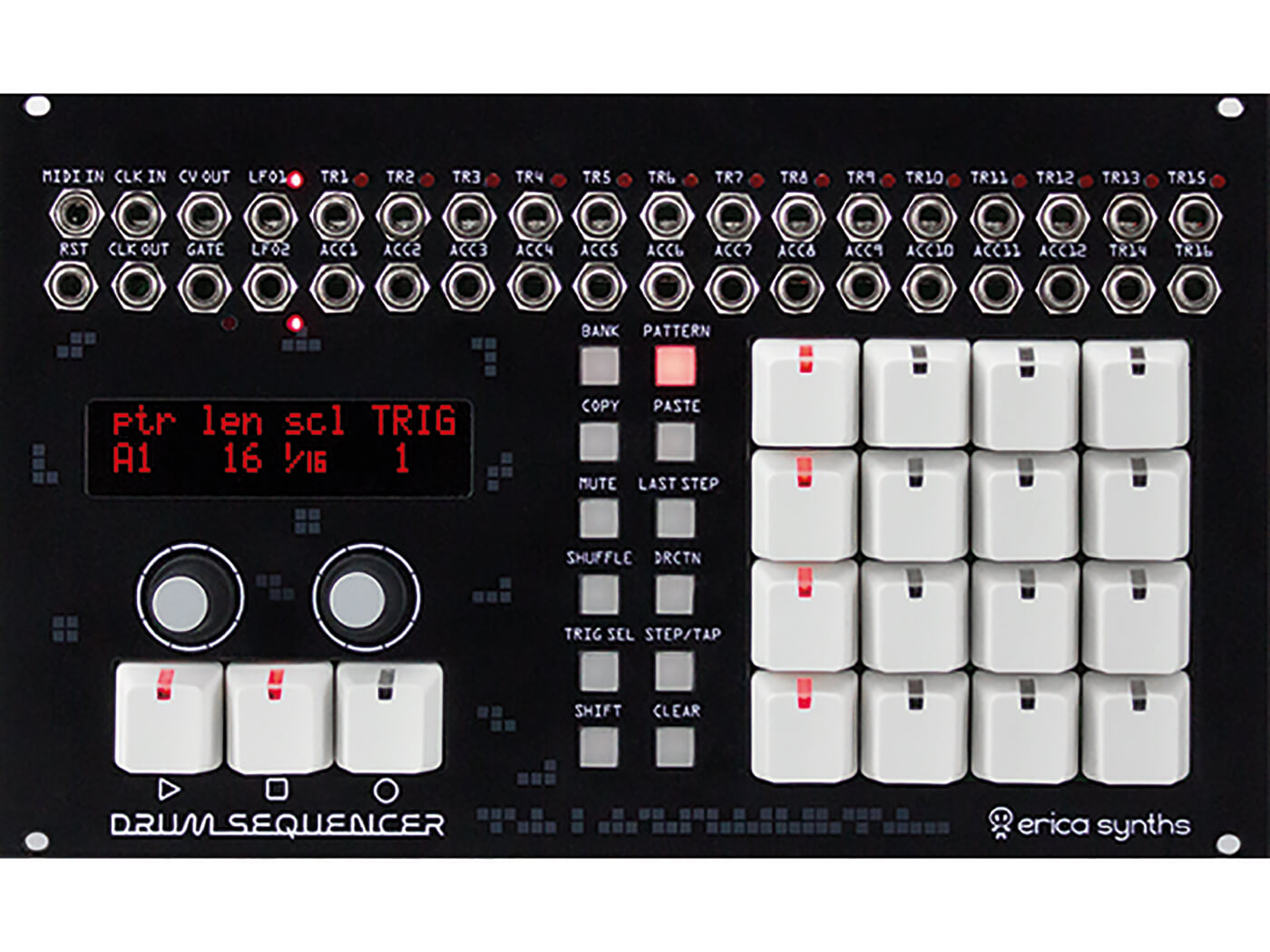 Able to manage all your drum-triggering duties from within your Eurorack system, Drum Sequencer provides 16 trigger outputs and can store eight banks of 16 patterns, each up to 64 steps in length. It’s a tidy solution.