This nifty mini keyboard controller can speak fluently with a range of gear, and looks to be centre of your live performance setup. Does it achieve the perfect balance of features vs. price? 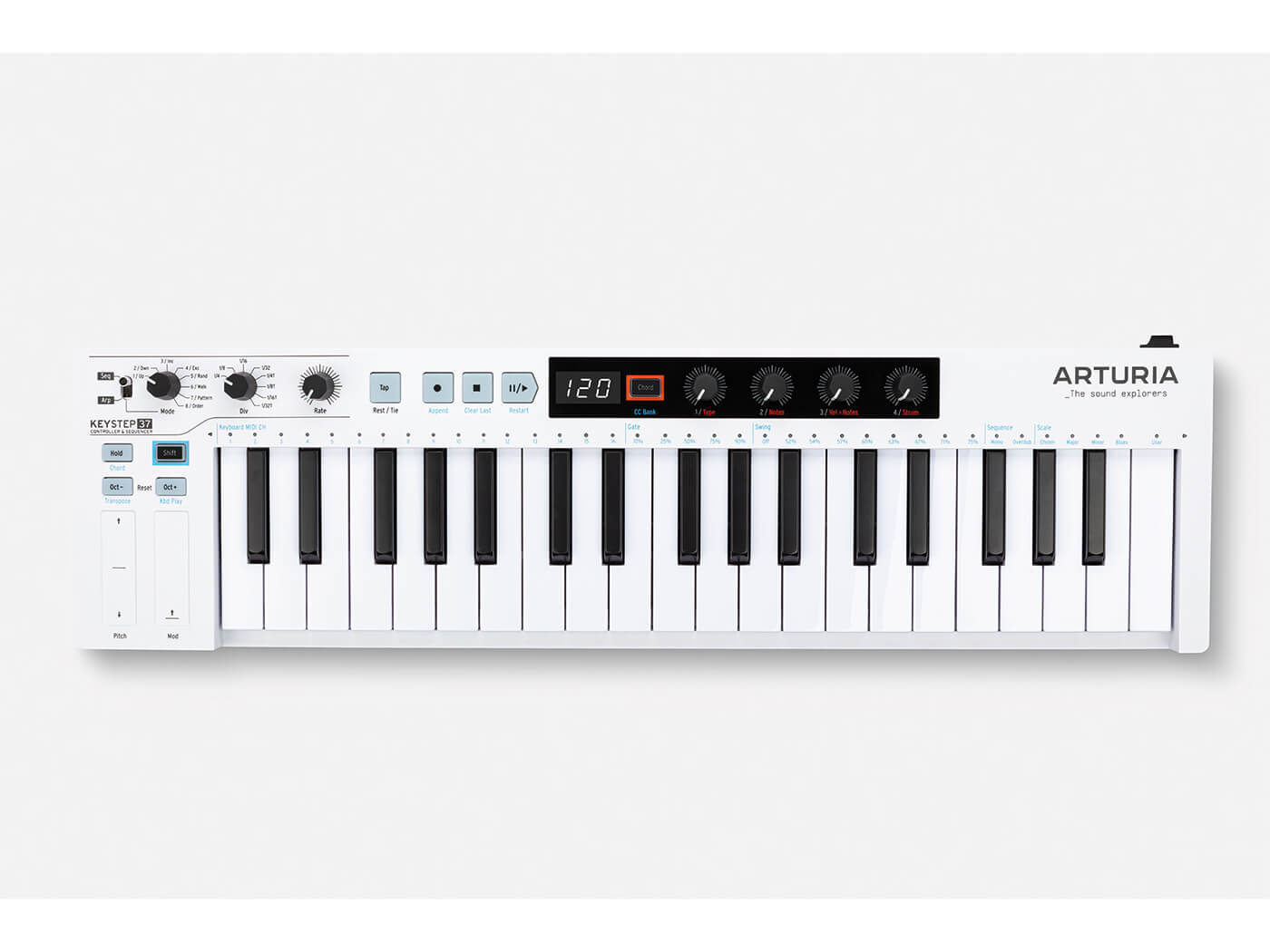 The latest addition to Arturia’s ‘Step’ family, the KeyStep 37 feels reassuringly sturdy when we first remove it from its trendy box. It has weight behind it to stop if moving around when played. The range of ins and outs is one of the big draws here. The left-hand side of the front panel houses controls for the sequencer and arpeggiator, and a toggle switch alternates between the two modes, whilst you can recall one of the eight user presets using the neighbouring knob. Division, rate (tempo) and transport buttons complete the line-up here, along with a tap tempo button for matching the sequence/arpeggio to a live performance. Further along, an LCD display shows the most important data values, and to the right of this are the chord and strum controls, which double up as continuous controller knobs (in four banks of four knobs).

In the keyboard section, pitch bend and modulation appear as touch strips, with pitch bend ‘spring’ back to a zero value as you’d traditionally expect. The LEDs above the keys light up to show activity on the sequencer (green) or keyboard (yellow).

On the back panel, MIDI in and out are present, as well as an always-welcome sustain pedal socket. Sync and CV in/out sockets are further along, using customary 3.5mm jack connectors. Meanwhile, a USB connector marries the keyboard with a computer – the unit is bus-powered in this mode – but the keyboard can also be powered from a USB charger in standalone mode or an optional 12v power supply. Finally, dip switches are used to select the sync mode for the keyboard, e.g. this would be set to internal sync in standalone mode. This is a keyboard that clearly wants to chat with other music-making hardware and software, it’d be cruel to deprive it. 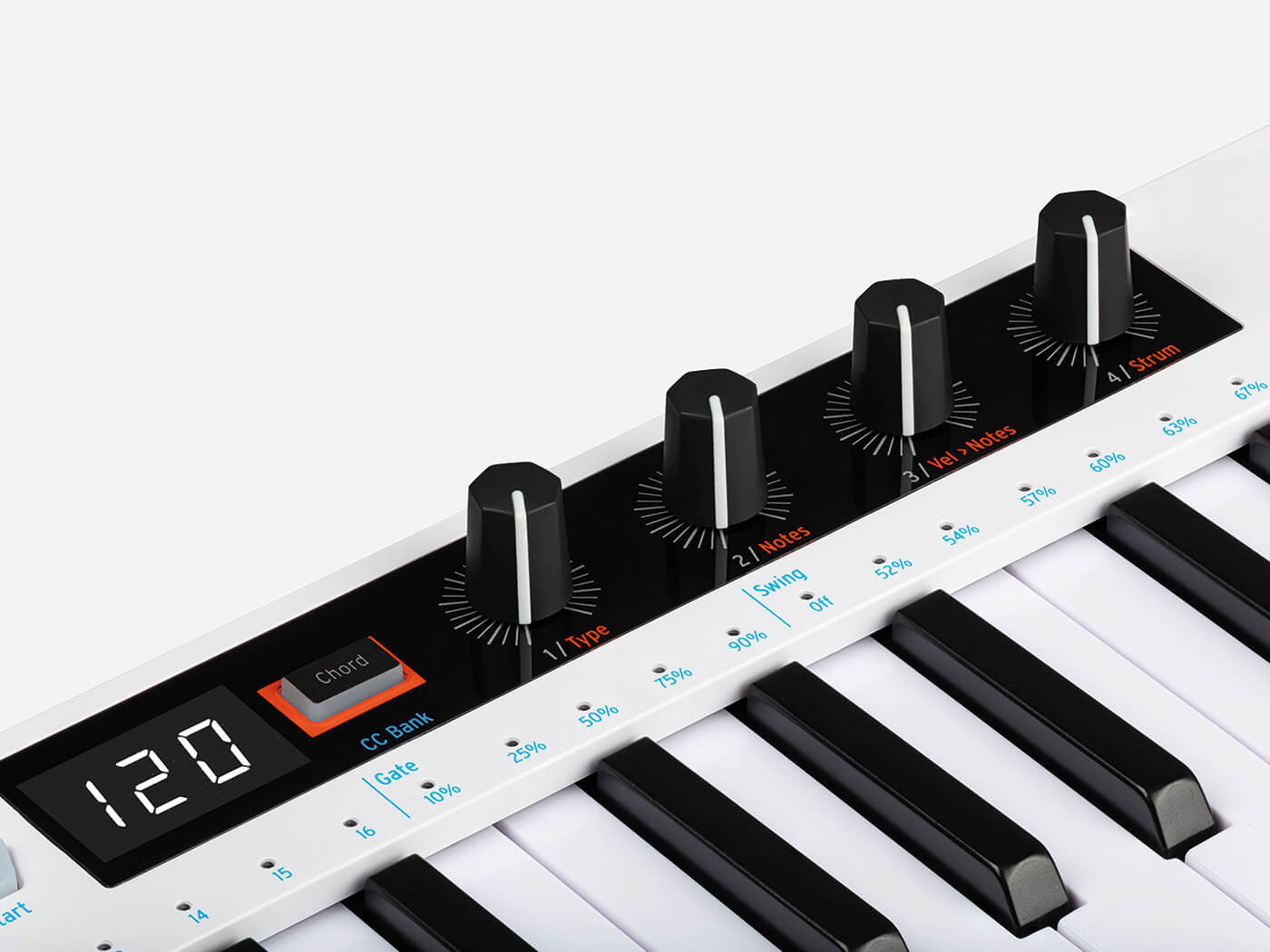 Right off the bat, the KeyStep 37 is a joy to use, as we principally test it in internal sync mode and trigger software instruments within Logic Pro. The slim keyboard feels surprisingly solid, with fairly limited key travel and not at all spongey when triggering aftertouch. It’s perhaps a little harder to hold down chords if you have chunky fingers, however fast, monophonic solos with jumps well in excess of an octave are a breeze. After all, we’d rather have a greater number of slimmer keys than, say, a couple of octaves of full-size keys.

Pitch bend and modulation controls add to this positive experience, especially since contrasting pitch bend values can be accessed quickly by touching opposite ends of the control strip in close succession, giving greater speed to bends. For modulation though, it would have been great to have some visual feedback. Unlike a traditional mod wheel, it’s fairly easy to brush past the strip and accidentally turn modulation on. You’re not always immediately aware that you’ve done this – particularly on software instrument sounds where modulation is not mapped to pitch – and there’s no read-out of the modulation value anywhere. 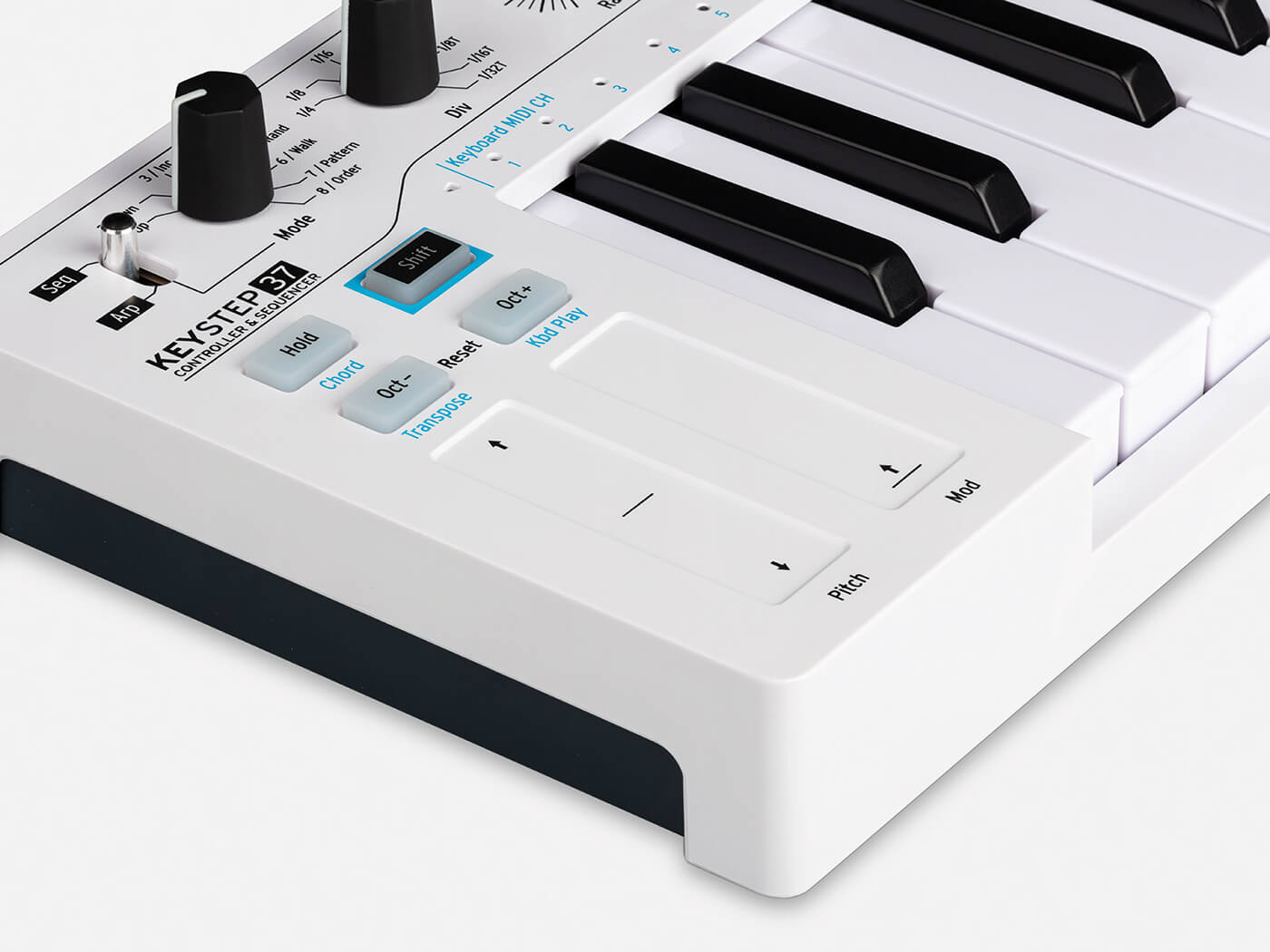 Back on the scales

Chord mode makes for seamless, easily inspiring, fun. Though the scale mode locks us safely to a scale, we plump for going a little more off-road with full minor, major and suspended chords, and we found that the octave setting worked well for layering solo and arpeggio lines, particularly with the strum feature turned on. With strum, it’s possible to get sumptuous tremolos between the chord notes, at times reminiscent of the sought-after Suzuki Omnichord sound.

In addition to chord type, parameters include number of notes and velocity to notes (‘Vel > Notes’) which varies the number of notes according to the velocity triggered on the keys. Strum works especially well with sounds that have a tuned percussion or stringy timbre and with the right settings, can be used to produce pretty unique arpeggio patterns too.

That the four chord knobs also work as continuous controllers is really useful for shaping parts e.g. with filter cut-off and effects parameters. The control software takes care of mapping the knobs to the relevant instrument-specific controller numbers and these can be saved/recalled. 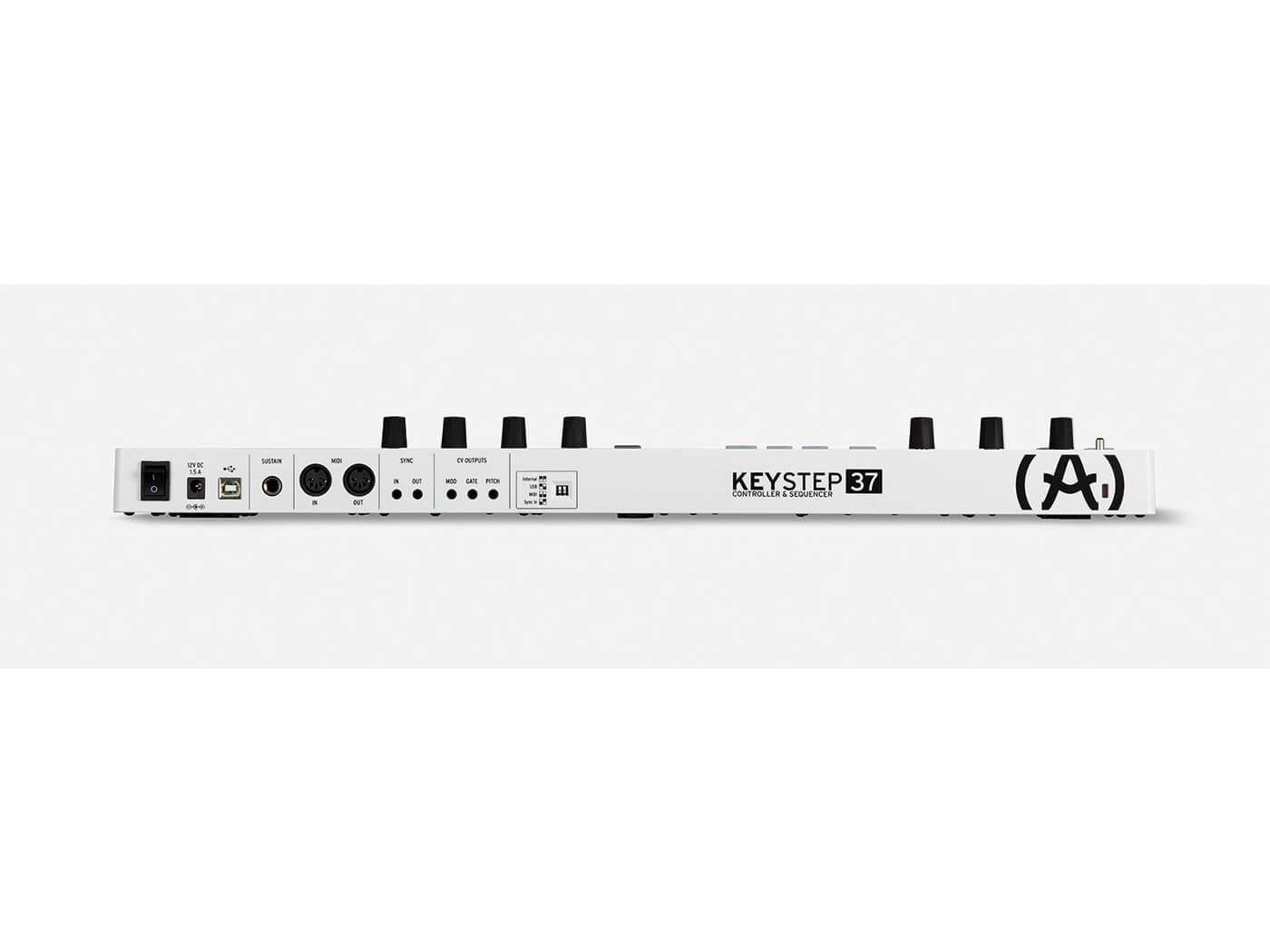 Creating arpeggios is a breeze, helped along by the keyboard LEDs to provide a flashy visual representation of what’s going on. Once you’ve got the hang of entering steps, the sequencer is pretty intuitive too. Handily, the control software can be relied on to back-up and edit sequence patterns in a simple and familiar piano roll form. This makes fine control of sequences – e.g. setting individual note velocities and comparing gate/swing values – far simpler and more intuitive as well as opening up possibilities for storing (and sharing) a larger number of sequences. To top things off, the Keyboard play mode allows you to switch to playing a live line over the top of a sequence once it’s been triggered. Handy for jamming along, Keyboard play can be set to an alternative MIDI channel so that you can access two different sounds at the same time.

This is a jam-packed controller, despite its small physical footprint. It’s a diverse creative tool; whether you want to sequence, arpeggiate or simply refine your creative ideas, KeyStep 37 will give you a leg up. 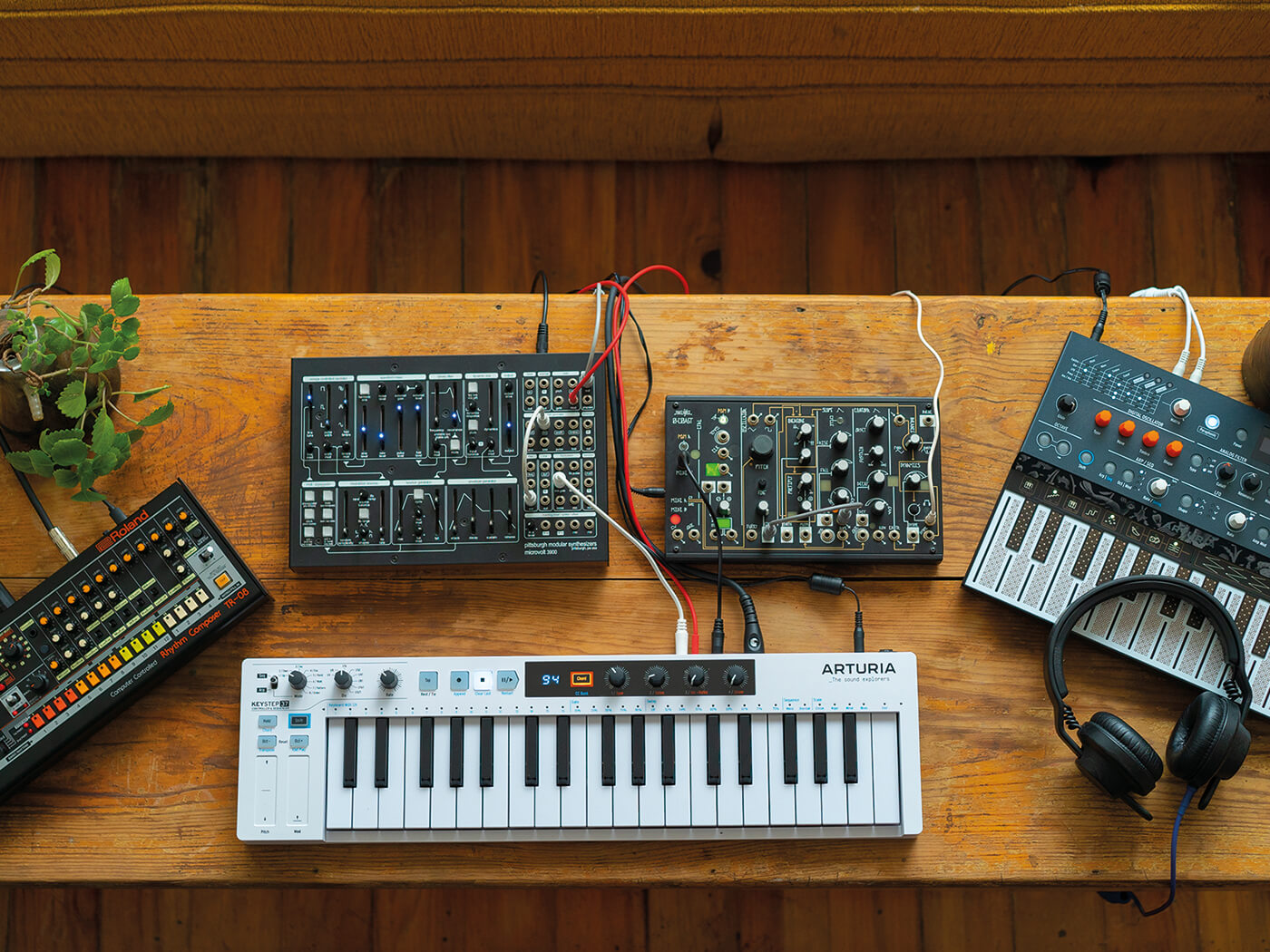 If you’ve been wishing for a keyboard for live performance that’s not going to be too big to lug around but also feels sturdy, then this is it. The arpeggiator and sequencer lay down quirky, repeating grooves, allowing you to pick up another instrument to play along or simply add a lead line on the keyboard using the play, chord and strum functions. The KeyStep 37 works well as a second controller keyboard too, with expression on tap using the neat pitch bend and modulation strips. For straightforward interfacing with retro MIDI and CV gear, this is way more exciting than a boring interface/control box, which may end up costing more anyway.

Novation’s alternative offers a similar form factor. It doesn’t have CV outs or a sequencer but instead goes to town with real-time MIDI control knobs/pads for detailed control of DAW plug-ins. A plug-in bundle with software instruments and a decent LCD screen sweeten the deal.

For those who want to delve deeper into the world of analogue synthesis, the kb37 offers rack space for Eurorack units to be mounted above a Fatar mini keyboard with onboard arpeggiator.