Continuing to build on its incomparable legacy, Akai adds to its range of products that combines the aesthetics of the old with the advancements of the new.

It was a sad day, in February 1986, when Linn Electronics closed its doors for the final time. The company had pioneered the concept of the sample-based drum machine, and had followed this up with a series of devices that took the company closer to realising founder Roger Linn’s vision of a fully-fledged all-in-one digital music production centre. Roger never enjoyed the manufacturing, marketing and sales side of his business though, which may go some way to explaining the demise of Linn Electronics. But it’s also one of the reasons he subsequently teamed with Japanese electronics firm Akai, and why that collaboration has proven so successful.

Finally, Linn’s concept of an all-in-one music production centre could become a reality, and a new legend in the world of music technology was born: the Akai MPC60. Akai’s MPC hardware remains popular to this day, and there are now many third-party computer-based solutions that seek to channel some of that legendary MPC workflow. Akai has many of its own derivatives too, including the newly updated MPK Mini USB controller. 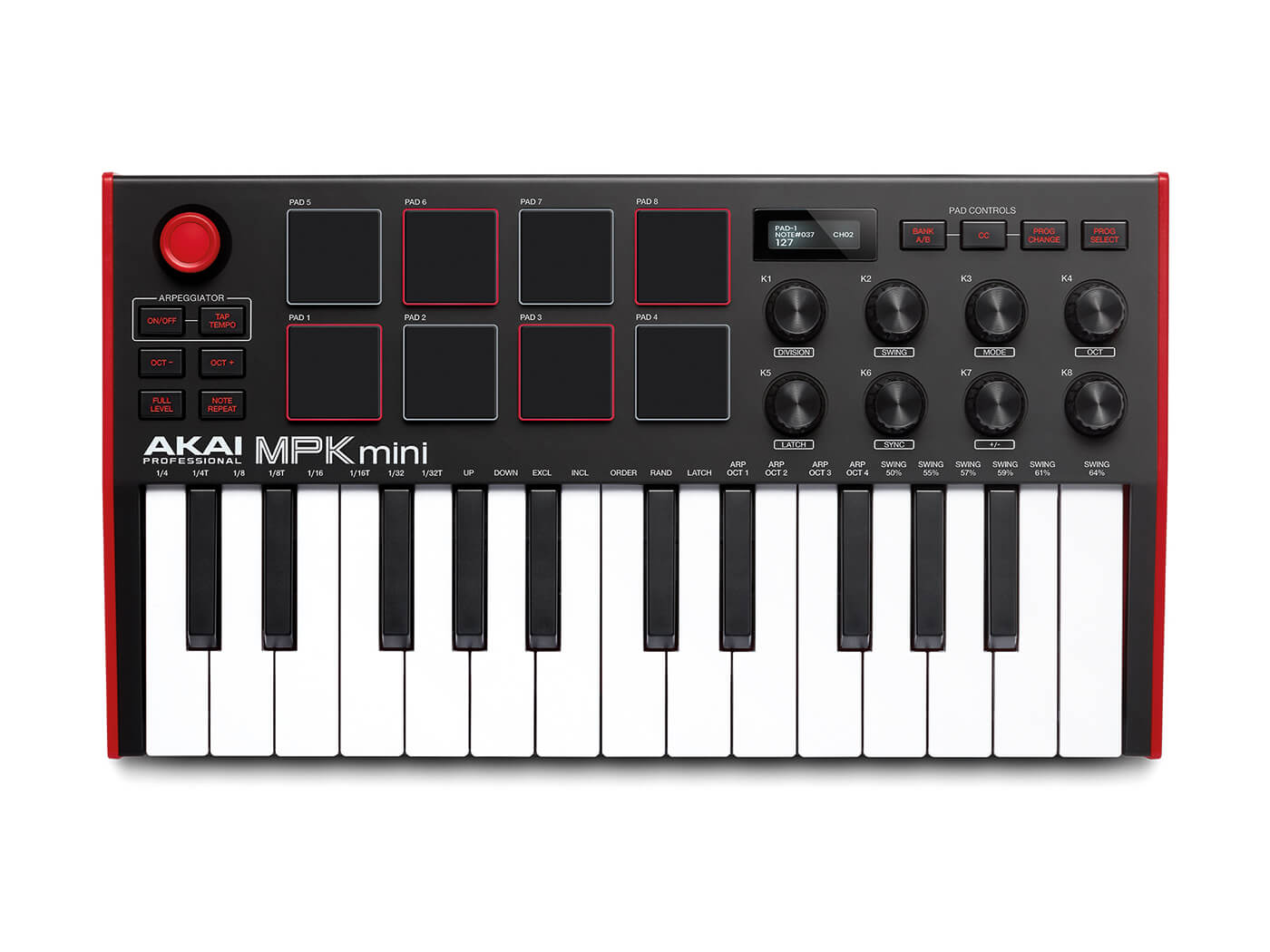 Although sporting the same core feature set as the previous incarnation (that is, mini keyboard, trigger pads and control knobs) the MPK Mini MK3 has been significantly overhauled. The 25 key two-octave keyboard is a new design that aims to be more responsive than its predecessor, while the eight backlit drum pads are now taken directly from Akai’s flagship MPC hardware, and so have the same solid feel, playable velocity sensitivity and both channel and polyphonic pressure sensitivity (the MK2’s pads were not pressure sensitive). The bank of eight knobs have also been improved, as they’re now of the continuous rotary encoder variety, meaning there’s none of that annoying business of parameters and knob positions not lining up when you load new synths and patches.

The layout of the function buttons has been altered too. There are a couple of additional buttons and some changes to the functions they trigger. For example, there is now only a single button to switch the pads between bank A and B, where previously each bank was selected with its own individual button. Thankfully, the other layout changes are similarly smart. The button that toggles the built-in arpeggiator, for instance, is now located to the left of the unit, making it easier to access while playing notes and pads with your right hand.

New to the MPK Mini MK3 is a stubby joystick controller that by default controls pitch bend with its X axis and mod wheel (MIDI CC1) with its Y axis, though you can assign other controller messages to the stick using the free Program Editor software. The joystick is a bit too short for the stiffness of its springs and, as a result, feels a bit clumsy. Out of the box, it’s not easy to move in only one direction at a time. We’re hoping it loosens up with use.

Another new addition to the hardware is a small, high-resolution monochrome display, which offers feedback for every control you touch. You’ll see the number and velocity of the last-played pad, as well as parameter readouts when adjusting the note repeat and arpeggiator features.

The updated styling of the hardware is notable too. There are sharper edges and corners on the MK3, which lends it a more professional look. The standard unit is predominantly black, with traditional white-and-black keys and stylish red trimming. But there’s also a black version with all-black keys, and a white version with inverted black-and-white keys (that is, white keys are black and black keys are white). 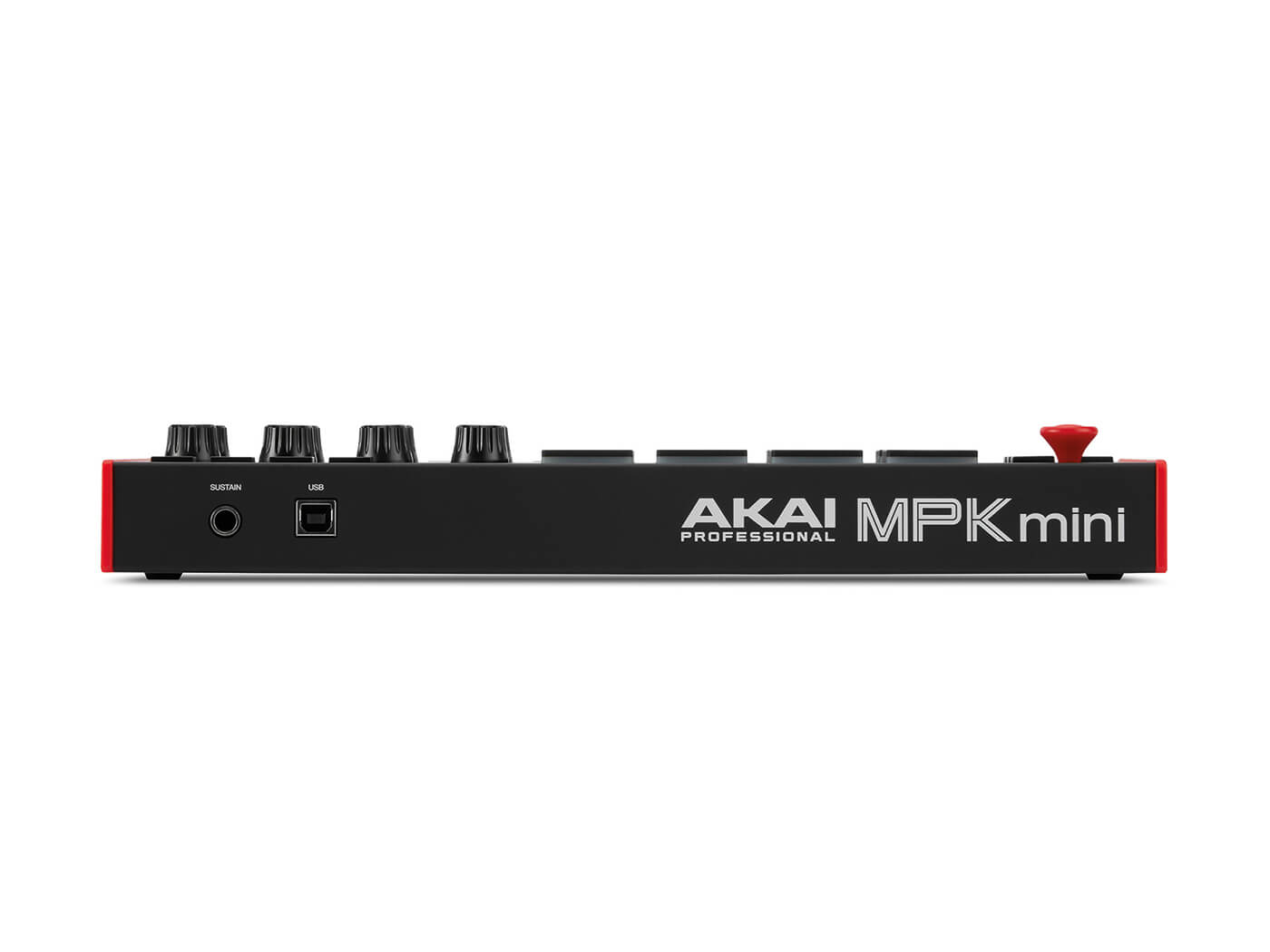 The MPK Mini hooks up via USB but uses standard MIDI messaging, so it plays nicely with DAWs and software instruments. You can customise all the controls too, using the free Program Editor software. The controller can store up to eight configurations, so it’s easy to flip all of the controls for use with different software or instruments.

The MPK Mini really comes into its own when it’s hooked up to a version of Akai’s MPC software. The starting point for this is the free MPC Beats, which is easy to install from the MPK Mini’s Software Manager app. Although it looks and behaves like a DAW, MPC Beats is in fact an instrument that can run standalone or as a plug-in within another DAW. In either case, it does an impressive job of merging the signature MPC workflow with the power and flexibility of a modern computer-based DAW. But the way it integrates with the MPK Mini is even more impressive: pad inputs can be translated into a further three banks of 16 pads; and knob controls can be easily flipped between controlling synth and sample parameters, mixer settings, global DAW navigation and so on. It really does feel like working on an MPC with a full-sized monitor attached.

Take it for a walk

MPK Mini’s most obvious selling point is its portability. It’s smaller than a laptop, with a footprint of less than 33 x 18cm, and it’s lightweight without feeling flimsy or insubstantial. The unit couldn’t be as compact as it is without miniature keys though, which aren’t to everybody’s taste. But the redesigned keybed makes these smaller keys more playable than those of any other miniature keyboards.

Any shortcomings in the key department, however, are more than made up for by the pads and knobs. The former are beautifully responsive and feel solid when played, while the latter are smooth and sturdy, and all the more useful for being continuous. All of this adds up to the MPK Mini being an ideal controller solution for portable and space-saving recording systems built around any DAW. And, when linked to Akai’s MPC software, this diminutive unit delivers an authentic MPC-like workflow too. 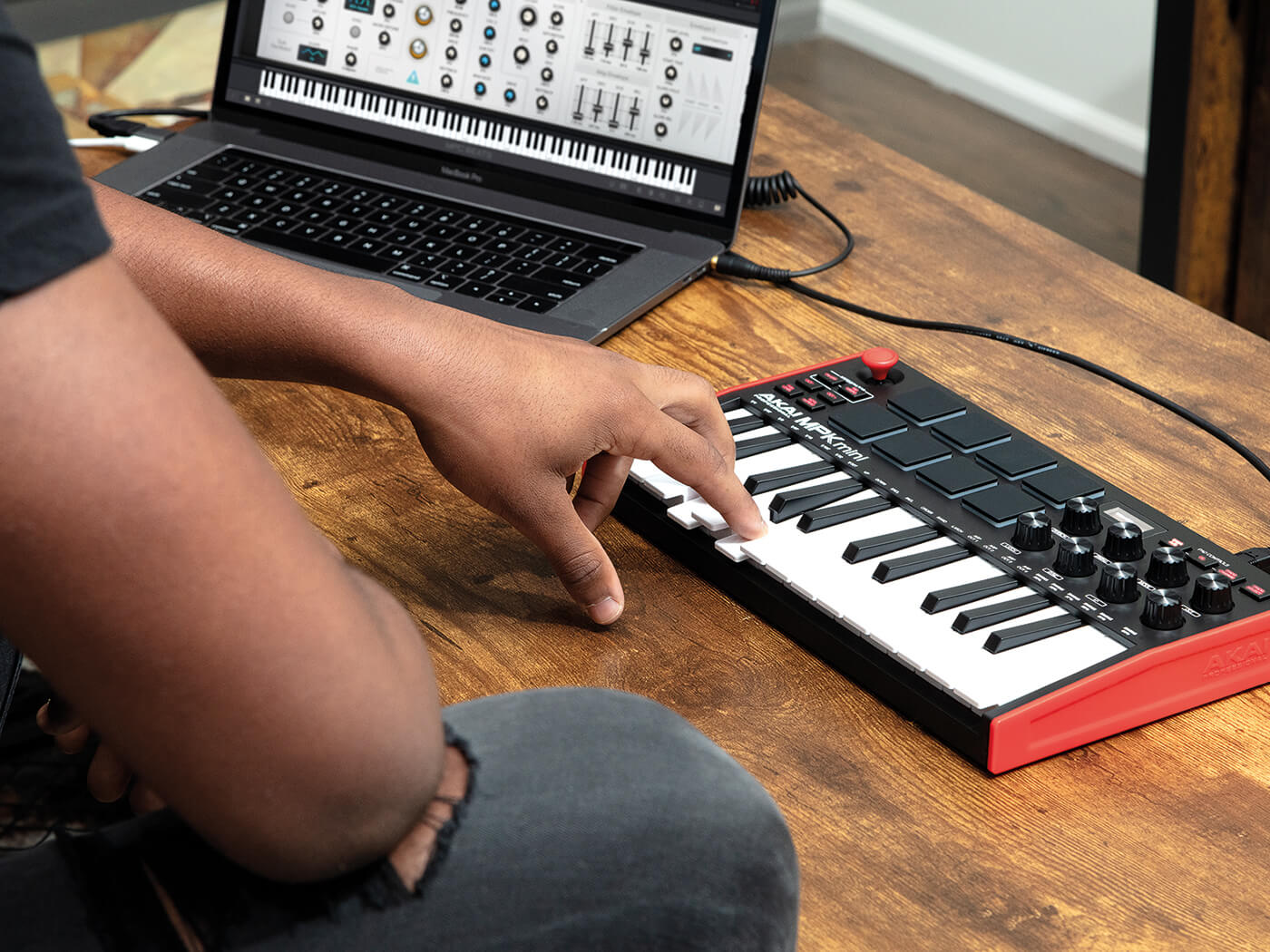 The market is awash with compact controllers that pack keys, pads and knobs (or some combination thereof) into ultra-portable enclosures, so there’s a lot of choice for those looking for such a solution. This latest incarnation of Akai’s MPK Mini ranks among the best of the bunch though, thanks to its high-quality pads, continuous rotary encoders and responsive keyboard.

Of course, miniature keys aren’t for everybody, especially those used to full-size keys, but this is an acceptable trade-off against the portability of the unit, and is mitigated by the MPK Mini’s newly designed keybed. As a tool for building beats, loops and patterns, you’ll find little that can beat the MPK Mini and its bundled software – with the possible exception of an actual MPC hardware unit!

With a 25-note mini-key keyboard, four assignable knobs with four banks, and a set of useful command buttons, iRig Keys 2 Mini can work with computers and be hooked directly to tablets and phones, where it provides an alternative audio output path.

This unit packs 16 velocity-sensitive pads, 16 rotary encoders and a 16-part pattern sequencer. BeatStep is exceptionally versatile. It can be hooked up to computers and hardware synths via USB or MIDI, and features CV output for controlling true analogue instruments.