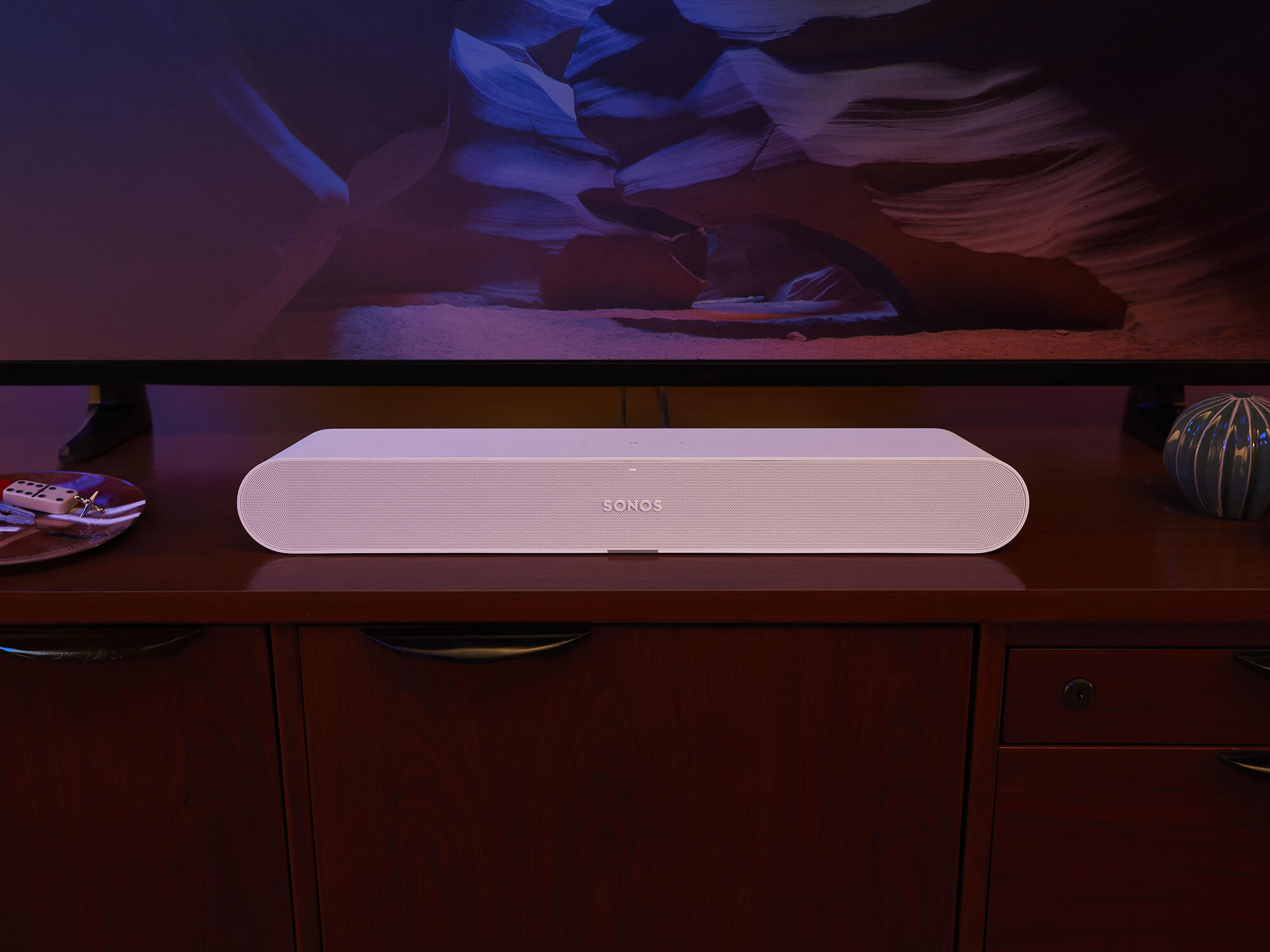 Sonos isn’t a brand that is considered low-cost. But that’s precisely what the Sonos Ray is – an affordable route into Sonos’s multi-room ecosystem.

Despite being the least expensive Sonos soundbar, the Ray offers a lot. It packs four speakers into a compact chassis, and can be paired with Sonos’ One SL speakers to create a wireless 4.0 surround sound system.

It’s compatible with AirPlay 2, so streaming locally stored audio is easy for Apple users. For everyone else, the Sonos app can integrate with Spotify, Tidal, Bandcamp, and others, letting you easily stream playlists from several services.

At $279/£279, you might wonder, ‘what’s the catch?’ There’s no HDMI port, only an old-school digital optical port. While that means a cheaper RRP, this means no Dolby Atmos.

Buyers unbothered about immersive sound standards might be tempted by this inexpensive option all the same. Here’s what you get (and don’t get) for your money.

The Sonos Ray is on the small side. Measuring just over seven centimetres tall, it’s even shorter than the Sonos Beam gen 2.

While this means it doesn’t bring much in the way of speakers to the party – the 114cm-wide Sonos Arc has room for 11 drivers, for example – it does mean that it’ll slot neatly underneath most TV sets and stands. Alternatively, you can wall-mount it.

As all of the speakers fire forwards, you don’t need to worry about anything blocking any upward or side-firing horns.

Like all other Sonos soundbars, the Ray is available in black or white, and it features touch-sensitive controls on the top instead of physical controls, which gives it a streamlined look and feel.

On the back are connections for Ethernet, digital optical, mains power, and a sync button for pairing. Sonos includes a digital optical cable in the box, but no remote control. That’s not a huge problem, as there’s an infrared (IR) module built into the soundbar, so you’ll be able to use your regular TV remote. Bluetooth and RF-type remotes can work as well, but there’s less of a guarantee that all will be compatible.

The Sonos apps (iOS, Android) also largely replicate the functions of a dedicated remote. As well as adjusting the volume, there’s also a virtual EQ, toggle Night mode, which lowers bass tones for late-night viewing, and a Loudness feature, which boosts low-frequency noises when the volume is turned down.

The lack of an HDMI port on the Sonos Ray seems surprising, given that it’s such a common connection in 2022. After connecting the Ray, open the Sonos app and log in with – or create – your Sonos account.

You’ll be prompted to enter your home network’s password (unless you’re connecting via Ethernet). Once done, turn off your TV’s internal speakers and adjust the volume on your main remote. If all’s working, you should see the status LED in the centre of the soundbar flash and hear sound coming out of the speakers.

Now the soundbar’s set up, but, if you have an iOS device to hand, you can calibrate the speaker with Trueplay Tuning. This uses your phone’s mics to detect how sound travels throughout your room and adjusts the levels of the speakers accordingly. It’s a useful feature and a real bonus that Sonos has brought it to the Ray. It’s just a shame that there’s still no Android support for this.

The Sonos Ray features four drivers – two tweeters and two mid-range woofers. There’s no bass driver but there is a pair of reflex ports which accentuate low-end noises. Sonos is rumoured to be adding subwoofer support for the Ray, but there’s nothing official on the cards for now.

Dialogue on a range of movies and TV shows sounded wonderfully clear and detailed, and this is despite there being no central driver – middle speakers tend to do most of the lifting where dialogue is concerned. From action-packed media like Avengers: Endgame to quieter shows like Only Murders in the Building, vocals sounded pristine.

While it can’t handle Dolby Atmos, the Sonos Ray supports Stereo PCM, Dolby Digital 5.1 and DTS Digital Surround. Without any side speakers to hand, we can’t comment on how well surround sounds are handled. Low-end noises are generally well-defined, although at high volumes, there’s some resonance detectable. Low frequency overload is especially noticeable when listening to music.

The basslines of Holly Cole’s Train Song, Dead Prez’s Hip-Hop, and Massive Attack’s Angel crowded out other details, and that’s with just the bass level set to zero on the EQ. Moving the bass all the way up on Hip-Hop meant that the drums, while just about perceptible, lost definition, and the distorted bassline, sounded rounder than it typically does. We found that setting bass at -3 and treble at +1 on the virtual EQ made for a much more balanced experience. At these levels, there’s better separation between everything.

As with dialogue in TV and movies, vocal tracks on songs sounded nice and clear, with the low vocals in Train Song and Peter Gabriel’s Intruder sounding clear and well-defined in the mixes. Transient noises from acoustic guitar tracks like Steve Howe’s Mood For A Day and Doc Watson’s Dill Pickle Rag also sounded bright and detailed.

The Sonos Ray is impressive considering its size and price. Should you buy one?

This depends on the age of your TV set, if you were planning on upgrading it anytime soon, and if both devices have a digital optical connection. Digital optical is on the way out, and as fewer new TVs will support it, if you were looking to upgrade soon, the Ray might not be the best option, unless you’re planning to keep your old TV. You can add One SL sides (£179 each) or a Sonos Roam (£179), to expand things, but it’s hard to weigh the Sonos Ray against the competition without knowing if a subwoofer will ever be released for it. For example, the Polk React goes for $249/£249, plus $199/£179 for a sub.

Likewise, the Polk Signa S4 is priced at $399/£329, subwoofer included, and this features support for Dolby Atmos. But neither of these soundbars feature multi-room support, so if that’s more appealing, then the Sonos Ray is the one to go for. Alternatively, the Sonos Beam gen 2, while pricier at $449.99/£449.99, can be linked with both a Gen 3 subwoofer (£749), and One SL’s (£179 each) – although of course this then sees the cost climbing considerably. If you want to upgrade your system once you’ve got that initial soundbar, it might be worth waiting to see if a Ray-friendly subwoofer will hit shelves before you hand over your notes.