The best soundbar ever? Maybe. If you can afford it… 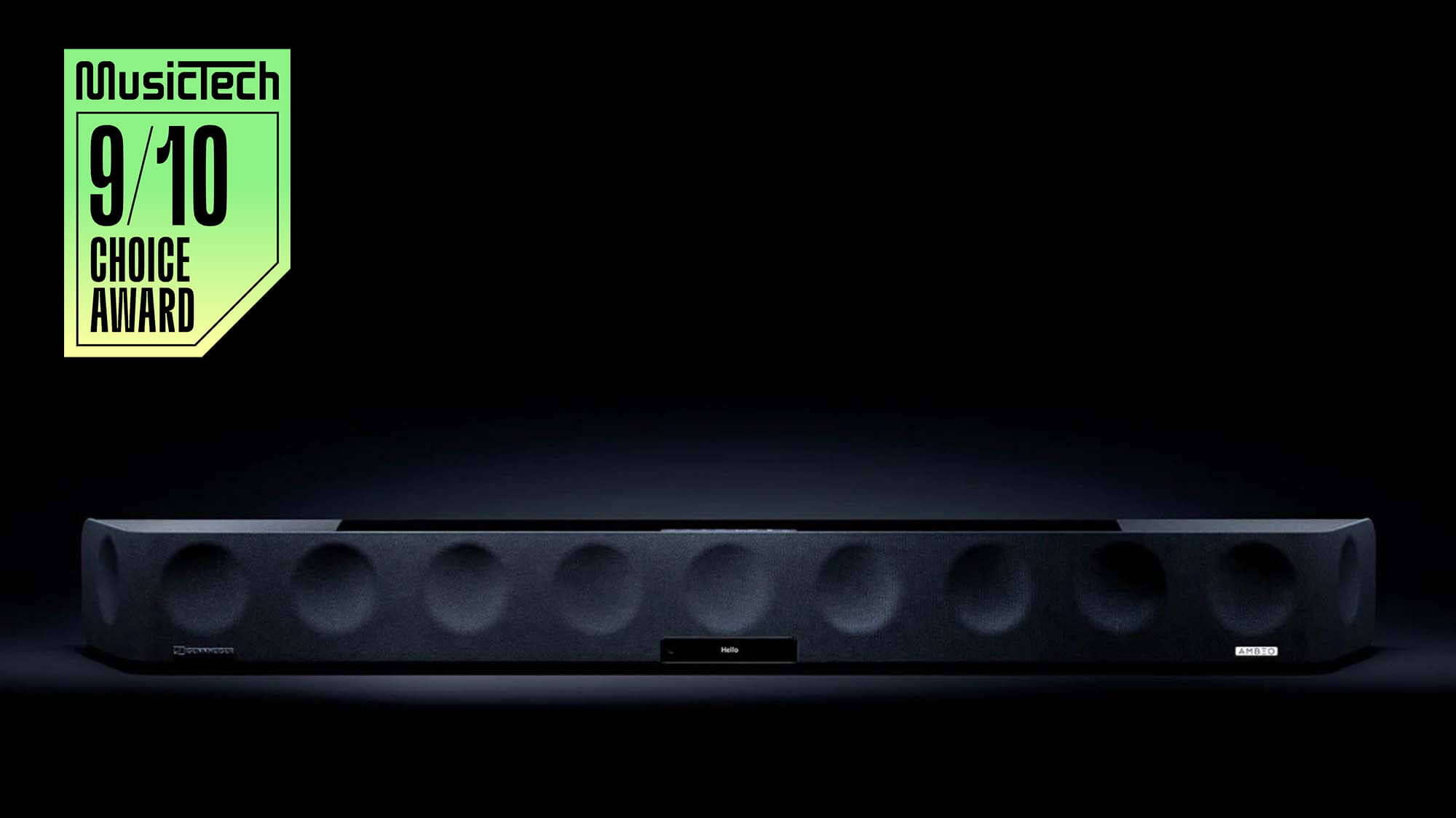 Soundbars exist largely by virtue of the fact that TVs have for the last few years become thinner, wider and lighter. Consequently, as there’s less space for manufacturers to integrate large speakers into TV sets, soundbars have become bigger, louder and heavier.

The Sennheiser Ambeo Soundbar is perhaps the epitome of this trend. It is huge, one of the largest soundbars available to buy right now, and heavy. It is also loud. Very, very loud. It’s an all-in-one 5.1.4 system which promises to give you a complete surround sound performance out of the box.

Coming with 13 speakers supporting a wide frequency range – 30 Hz to 20 kHz (-3 dB) – Sennheiser reckons that the Ambeo Soundbar will give you a good enough bass performance without the need for a separate sub – although there’s the option to add one if you want to.

Support for the Dolby Atmos, DTS:X, MPEG-H Audio surround sound standards are also included. An external microphone allows the Ambeo to analyse the natural acoustics of your living room and create a tailored profile, creating an enveloping wall of sound, supposedly without the need for any side speakers.

Instead of the usual cuboidal or cylindrical soundbar shape, the Ambeo Soundbar is trapezoidal. Even the shortest of the two parallels still measures over a metre – 114 cm, while the longer side measures 126 cm. It’s fairly tall at 12.5 cm and deep too, at 17 cm.

Pop off the fabric mesh coating on the front and you’ll see where most of the Ambeo Sounbar’s firepower is hiding: six 4” long-throw woofers flanked by a pair of 1” tweeters and another tweeter in the centre stare back at you. Two more tweeters, one sat at each diagonal side, bookend the forward-firing speakers.

Once you notice these side-firing tweeters, the Ambeo Soundbar’s uncommon shape makes more sense – they’re angled away from you, as their role is to help project ambient noises around the room. Two top-firing speakers which sit at the sides help in this regard. These are hidden behind sturdy metal grilles.

Due to the nature of the speaker arrangement, you’ll need to be mindful about where you set the Ambeo Soundbar up – in order for it to be able to throw sound around your living room, it needs room to breathe.

Black brushed aluminium coats the top of the Ambeo Soundbar. A tiny control panel sits up on top and in the centre. This is home to mute, volume controls, a toggle for Ambeo ambient sound, source, Bluetooth pairing, and power. There’s also an NFC hotspot for pairing with devices which support this. Underneath the control panel and built into the front of the Ambeo Soundbar is a small OLED display, and a 2.5mm connection for the ambient mic you’ll need to complete the set-up process.

Sennheiser has been generous in terms of physical connectivity, too. There are three HDMI In ports, and one HDMI Out, which supports eARC (enhanced audio return channel). It also has a single port for digital optical audio, stereo analogue with RCA connectors, and a pre-out for an external subwoofer. And there’s an Ethernet port and a USB port for firmware updates.

As a nice touch, there’s a cable tidy built in, making it easy to gather up all of your wires and cut down on clutter.

In the box you get a Sennheiser remote, and an external mic which is used to calibrate the ambient ‘Ambeo’ surround sound mode.

Once you’ve placed the unit in front of your TV and powered it on, you’re ready to start calibrating. Luckily, as there’s just one unit to set up, this doesn’t take too long – roughly 10 minutes in total.

You plug the mic into the front of the soundbar and set it up in the sweet spot of the room, ideally near to where you’ll be sitting. The mic’s cable is about 5m long, so that should be enough reach for most living rooms.

When you’ve set up the mic in the sweet spot, you press the Ambeo button on the remote control and the soundbar’s control panel. Shortly after, the soundbar emits a series of tonal sweeps, from low to high, and the ambient mic records this. It takes note of how sound bounces off of walls, corners, and your ceiling, then feeds this info back to the soundbar. The tones are quite loud, and could be upsetting to pets, so make sure any furry friends are out of the room and your windows are shut.

Once the soundbar has finished calibrating, tapping on the dedicated ‘Ambeo’ button on the remote will launch your personalised sound profile.

If you don’t want or need to have Ambeo turned on, there are a series of presets for more standard sound mixes – Movie, News, Music, Sports, as well as a Neutral mode, for when you’re not watching any specific kind of content. There’s also a considerate Night mode, which flattens the dynamic range, so you can watch TV late at night and not disturb housemates. All of these can be launched from the remote control’s shortcut buttons.

The remote control has a simple layout and is easy to get comfortable with. Along with the preset and Ambeo controls, there’s the usual volume, mute, and source buttons, and a multifunction key for pausing and skipping content streamed via Bluetooth or Chromecast.

The Sennheiser Smart Control app (iOS, Android) makes jumping between the presets and toggling Ambeo mode even easier. Here, you can pick from three flavours of Ambeo mode: Light, Standard and Boost. On top of that, you can tinker with the presets via a four-channel virtual EQ, which lets you raise or lower each channel by increments of 0.5dB.

The app uses Bluetooth to pair with your phone, which is fine, except for times when you want to stream music from the same device via Bluetooth – the app doesn’t like to connect with your phone when streaming tunes, and vice versa.

I downloaded 4K copies of Jumanji: The Next Level and The Secret Garden, movies with Dolby Atmos support on Sky Q to see how the Ambeo Soundbar would handle titles with 3D sound.

Obvious thrills like the rumbling of engines, fragments of exploded machinery thwacking into sand and the hollering of giant mandrills leapt out of the soundbar. Subtler noises, like the creaking of rope bridges and the scattering of grains of sand, were also well defined and travelled appropriately throughout the soundstage.

While not exactly high-octane, sound artefacts in The Secret Garden like struck matches, faltering electric lamps and chirping birdsong all jumped out from speakers with pleasing clarity. In both films, dialogue was always pushed to the fore, so nothing was ever drowned out by the surrounding noise.

Turning Ambeo mode on made these extra details even more noticeable, and made surround sound feel genuinely immersive. The infamous Jumanji drums, a regular motif, thudded pleasingly throughout the film, but with Ambeo mode on, they almost sounded like they were coming from behind me, despite there being no rear speakers.

An early scene in The Secret Garden sees Mary followed by a stray dog as she walks through the woods. The sound of leaves rustling and crunching under the dog’s feet were already pleasant enough, but with Ambeo mode on, the noises appeared to move around the room as the dog circled around Mary. It’s sometimes apparent that there are no rear or side speakers, but the illusion of ‘true’ surround sound was often convincing and impressive.

Both 5.1 and stereo content sound pretty fantastic, too. In Mank which I streamed on Netflix in 5.1, there’s a scene where two characters are taking bets on coin flips; the coin falls to the floor and rolls around before eventually rattling to a halt. That particular sound travelled fantastically well across the soundstage, and was so enjoyable I kept skipping back to watch the scene over and over.

It feels a bit strange to have Ambeo on while you’re watching the news or any content which doesn’t really warrant this kind of dramatic, cavernous presentation. But on or off, voice-overs and newsreaders always sounded clearly defined.

Music streamed to the Ambeo Soundbar also sounds incredible. Billie Eilish’s I Didn’t Change My Number was a revelation. The bass had more weight and depth to it than I’ve ever heard, and the distorted synth parts hovered menacingly. As with TV dialogue, the almost-whispered vocal, while quite prominent in the mix, was never overwhelmed.

Likewise, reverb-ed cymbal and snare hits and distorted guitar from Bauhaus’ She’s In Parties stood out, the high frequencies benefitting from plenty of headroom to rise above the sinuous bassline.

Dave Brubeck’s Take Five and Mood For A Day from Yes’s Fragile tended to show up lesser speakers.

But on the Ambeo Soundbar, Joe Morello’s drum rolls on the former track sounded like a thunderstorm with the volume turned all the way up – but even at this level, there was no telltale clipping or distortion. I could still make out little details, things like Gene Wright’s bass strings bending slightly at 3:55.

Likewise, Steve Howe’s acoustic guitar work on the Yes track was beautifully detailed. Mood For A Day can make weaker speakers vibrate noisily, but little to no definition was lost here. Even the super-heavy bassline of Dead Prez’s Hip-Hop couldn’t make the Ambeo Soundbar shake.

In fairness, you’d hope that music playback was this good, given that the asking price is over $/£2,000. The biggest drawback of the Sennheiser Ambeo Soundbar is how much you’ll need to cough up for it.

The Bang & Olufsen Beosound Stage is another high-end all-in-one soundbar priced at around $1,899/£1,349. For a bit less money, you could pick up a Samsung HW-Q950T ($1,799.99/£1,199), which comes with two rear speakers and a separate sub. Purists will say that a single speaker can’t replicate a full surround sound system. And yes, you could connect a sub to the Ambeo Soundbar, but that will only add to the cost.

That said, if you have the cash to splash on a heavy-duty unit but not the space for a big setup with lots of speakers dotted around your living room, then it really is hard to fault the Sennheiser Ambeo Soundbar.