The Signa S4 is a straightforward soundbar with pleasing sound quality and Dolby Atmos support – but it’s not without its drawbacks. 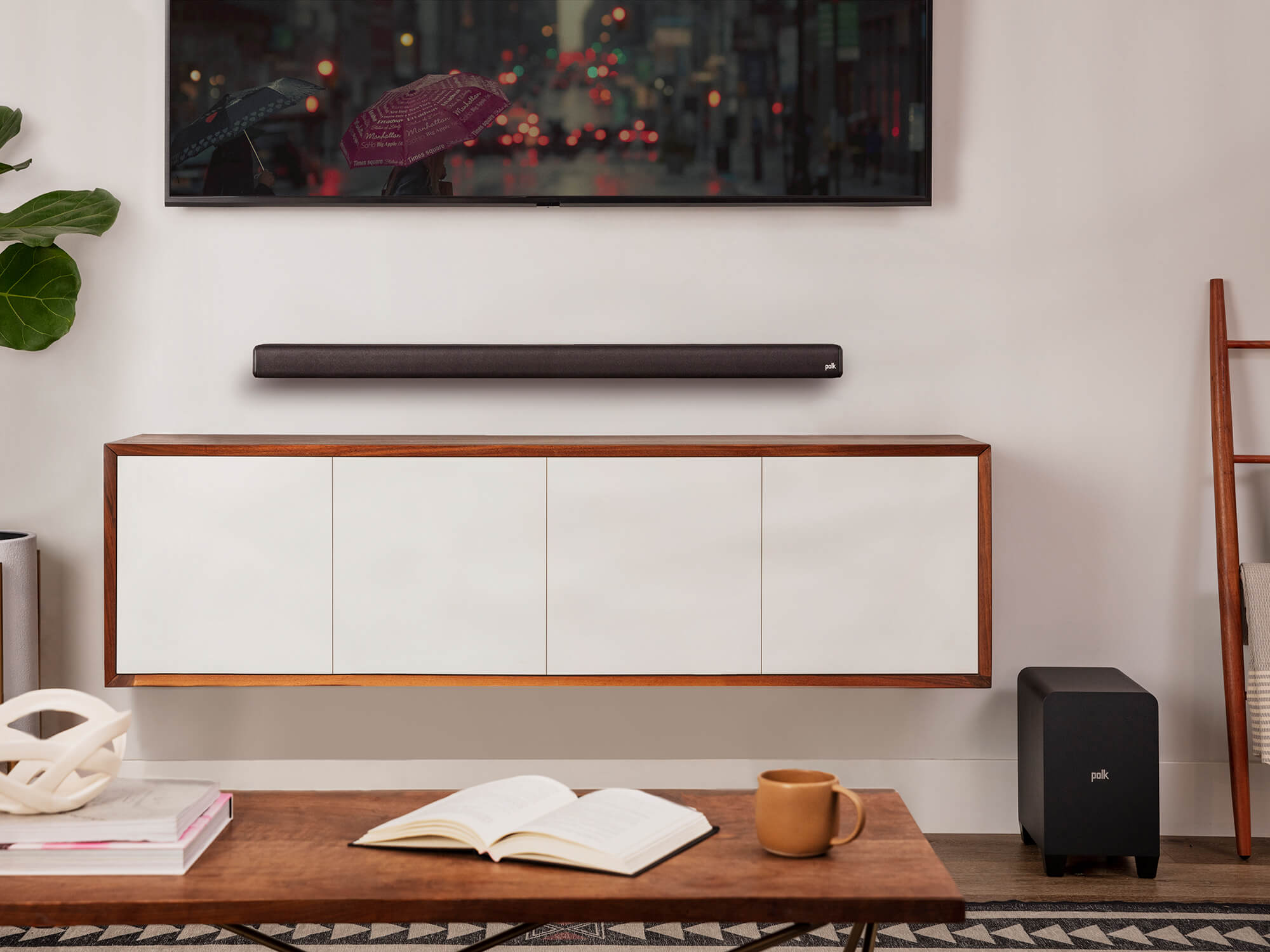 Polk’s Signa S4 soundbar gives movie fans a taste of the Dolby Atmos experience for less, and comes with a subwoofer, offering a surprisingly affordable entry point into a 3D surround sound setup.

The Signa S4 can also comfortably double as a music centre, though your connectivity options are limited to Bluetooth 5.0 and a 3.5mm audio jack. Unfortunately, there’s no support for Apple AirPlay, Google Chromecast, or any music streaming platforms. Nor can the Signa S4 be controlled from your phone via an app – neither can Polks’ React and MagniFi Mini AX. So you don’t get any smart connectivity features but, happily, you do get a 3.1.2 system, all in one package, for a mere $399/£329.

At 1046x60x95mm, the Signa S4 soundbar is wide but not too high or deep. Consequently, it’ll easily slip underneath most TV sets, sit comfortably on a stand or take up minimal real estate on a wall mount.

Covering the speakers is a tidy woven material that covers both the front-facing and top-firing speakers. This gives the Signa S4 a sophisticated look but, like a lot of fabric covers, it will pick up dust and pet fluff. A bank of controls sits on the top, and while there’s no display, a series of LEDs hidden underneath the fabric mesh light up when you’re tweaking volume and bass levels.

Polk and Denon are owned by Sound United, meaning that the two companies sometimes share design platforms. As a result, you might notice that the Polk Signa S4 looks starkly similar to the Denon DHT-S517. There are a few slight differences, however – such as the singular HDMI port on the Signa S4. Unfortunately, this means there’s no option for HDMI passthrough, as there is on the Denon.

That single HDMI port uses an Enhanced Audio Return Channel (eARC) for spatial audio, and sits next to an optical audio port and a 3.5mm jack. There’s also a USB port, which you’ll only use for system updates.

The Signa S4’s subwoofer’s speaker fires downwards, and the whole thing stands on 4cm-tall feet, allowing low-end sounds to exit the speaker and reverberate across the ground – this makes it better suited to rooms without carpeted floors. 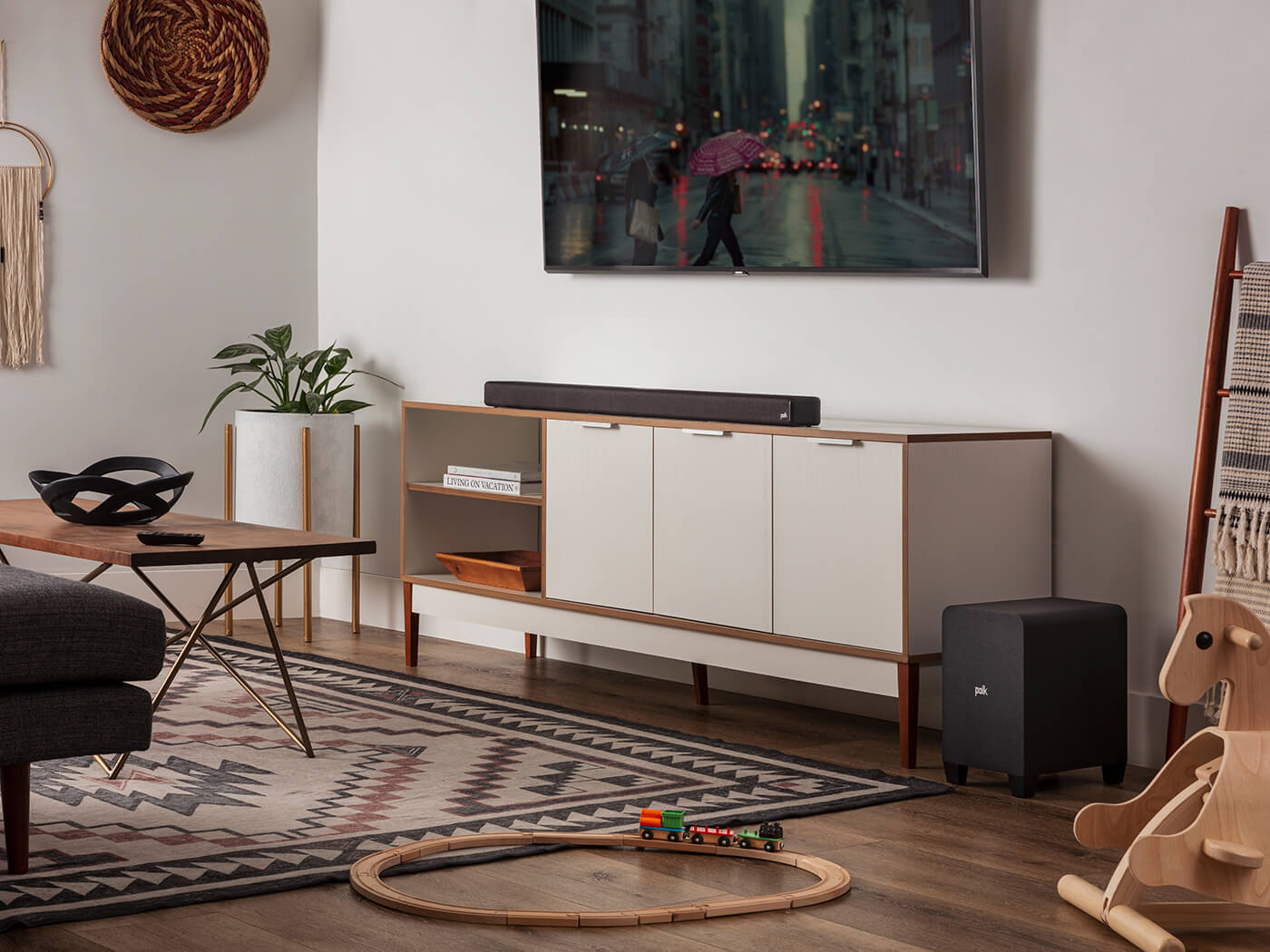 Set-up is simple, thanks to the presence of eARC tech. As with the Polk React and Polk MagniFi Mini AX, simply plugging the Signa S4 into your TV’s HDMI port means you’ll be listening within seconds and controlling the volume of the soundbar using your regular TV remote.

The subwoofer is also easy to install – once you connect and power on the soundbar, a quick press of the Connect button on the sub’s rear will establish a wireless connection.

The supplied remote is what you’ll reach for to adjust bass level, three listening modes – Movies, Night, and Music – and three levels of dialogue boosting, which uses Polk’s Voice Adjust technology to lift speech in TV and movies. While this is welcome, there’s no means of tweaking channel levels via a virtual EQ, which is something you’ll get with pricier systems such as the Sennheiser Ambeo Soundbar. 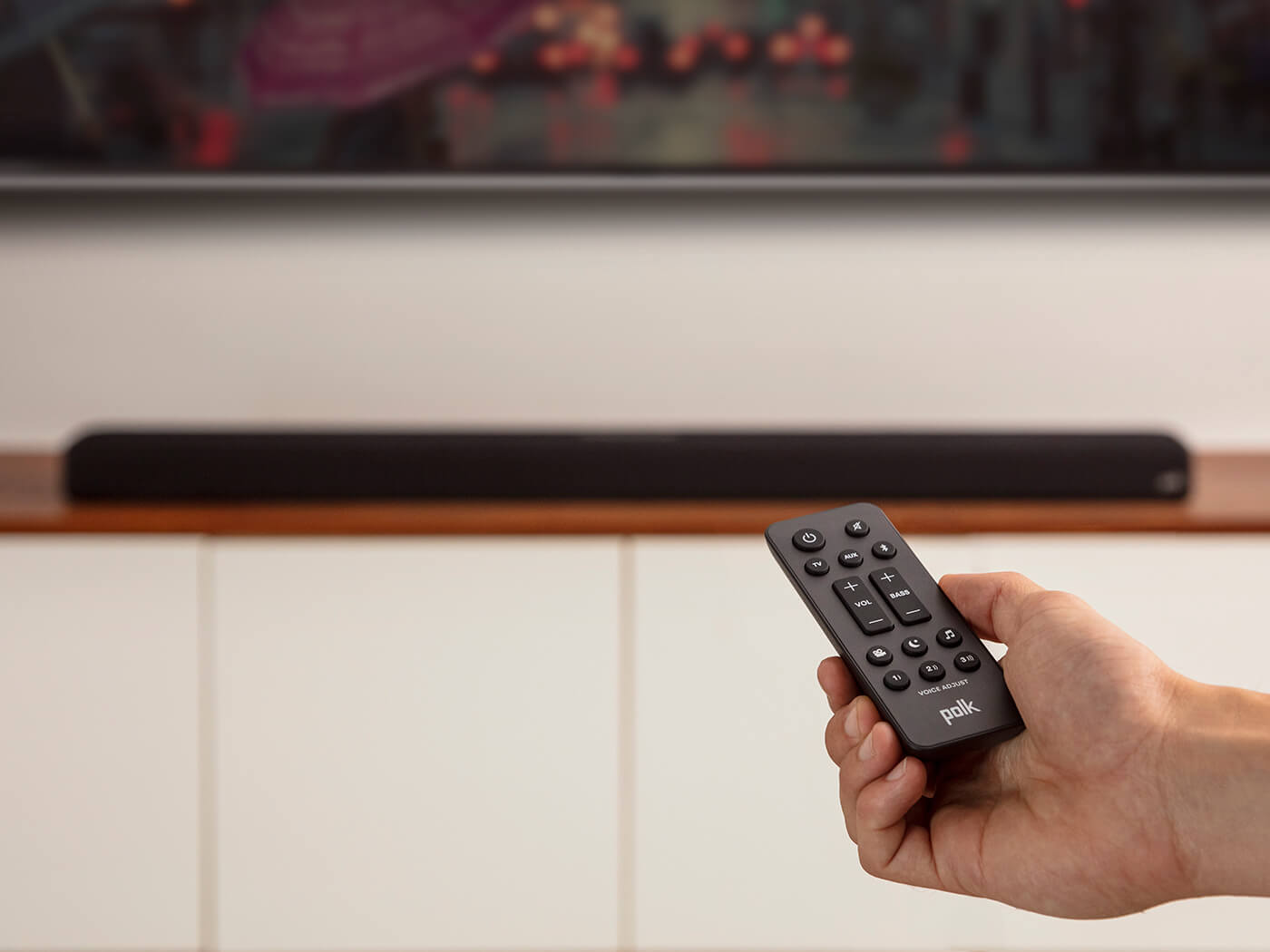 The Signa S4 features seven drivers in the soundbar: a tweeter and mid-range speaker on each side, a full-range driver in the centre, and two upward-firing speakers on the top, making up the three and two channels, respectively. The subwoofer comprises the channel of one – again, this is practically identical to the Denon S517.

And, like the Denon, the sound quality is excellent. Nothing is crowded out in TV and movie mixes, and even without the extra Voice Adjust modes activated, speech is nicely defined.

The soundstage is wide, despite the absence of side horns, and the upward-firing speakers add height. The subwoofer arrangement means that you tend to feel low-end noise rather than hear it. Both the Movies and Music modes are fine, whether you’re watching something or listening to music. The former preset places an emphasis on the side speakers, whereas the latter sees the central speaker doing more of the lifting. The Night mode, a standard feature on most soundbars, dramatically reduces bass levels, so as to not wake up neighbours, flatmates and, most importantly, sleeping toddlers.

Both high-octane explosions and subtle sonic details present in Dolby Atmos soundtracks like Jumanji: The Next Level and Dune shine with the Signa S4. The Jumanji drums are deep and resonant through the sub, and the gradually building thrum of the ornithopter wings in Dune sound seriously convincing. 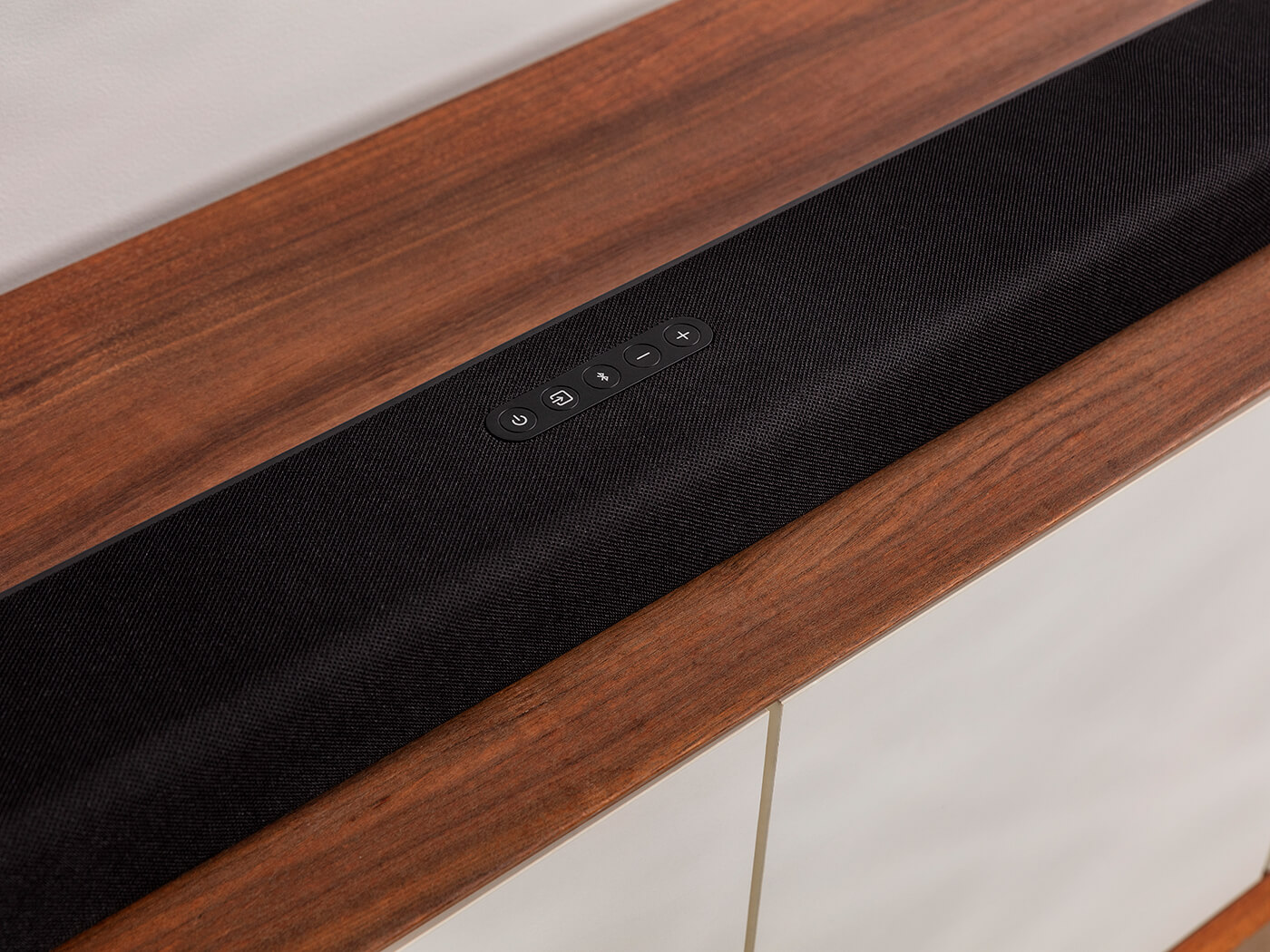 The sense of immersion is not as enchanting as in the Sonos Arc or the colossal Sennheiser Ambeo soundbar, but that’s to be expected – the Signa S4 features fewer speakers, and is significantly cheaper.

While you can’t stream music via Wi-Fi, tunes streamed over Bluetooth sound sweet, benefiting from clear separation. The drums and bass guitar on Radiohead’s The National Anthem stand out even as the layers and layers of brass pile up. The juggernaut bass of Dead Prez’s Hip-Hop threatens to envelop the kick drum at high volumes, but there’s just enough definition here to retain details.

The reverb and delay on the guitars, snares, and vocals in Bauhaus’s She’s In Parties are well articulated. It’s easy for this track to sound awful on poor-quality speakers, as there’s a lot going on. We found the vocal on Nick Drake’s Things Behind The Sun to be a little too prominent on Music mode – switching to the Movies preset made for a more balanced listen.

There’s no getting away from the fact that the Polk Signa S4 and Denon S517 are quite similar. Both are impressive value and provide a comparable experience. But, at the time of writing, the Signa S4 is about fifty dollars/pounds cheaper, the bass is less aggressive, the lack of HDMI passthrough means it’s slightly less versatile.

But, depending on your budget, tastes, and living room setup, those points might be redundant. It’s certainly hard to turn your nose up at the Signa S4 – and it’s a small price to pay for a big upgrade to your TV’s speakers. 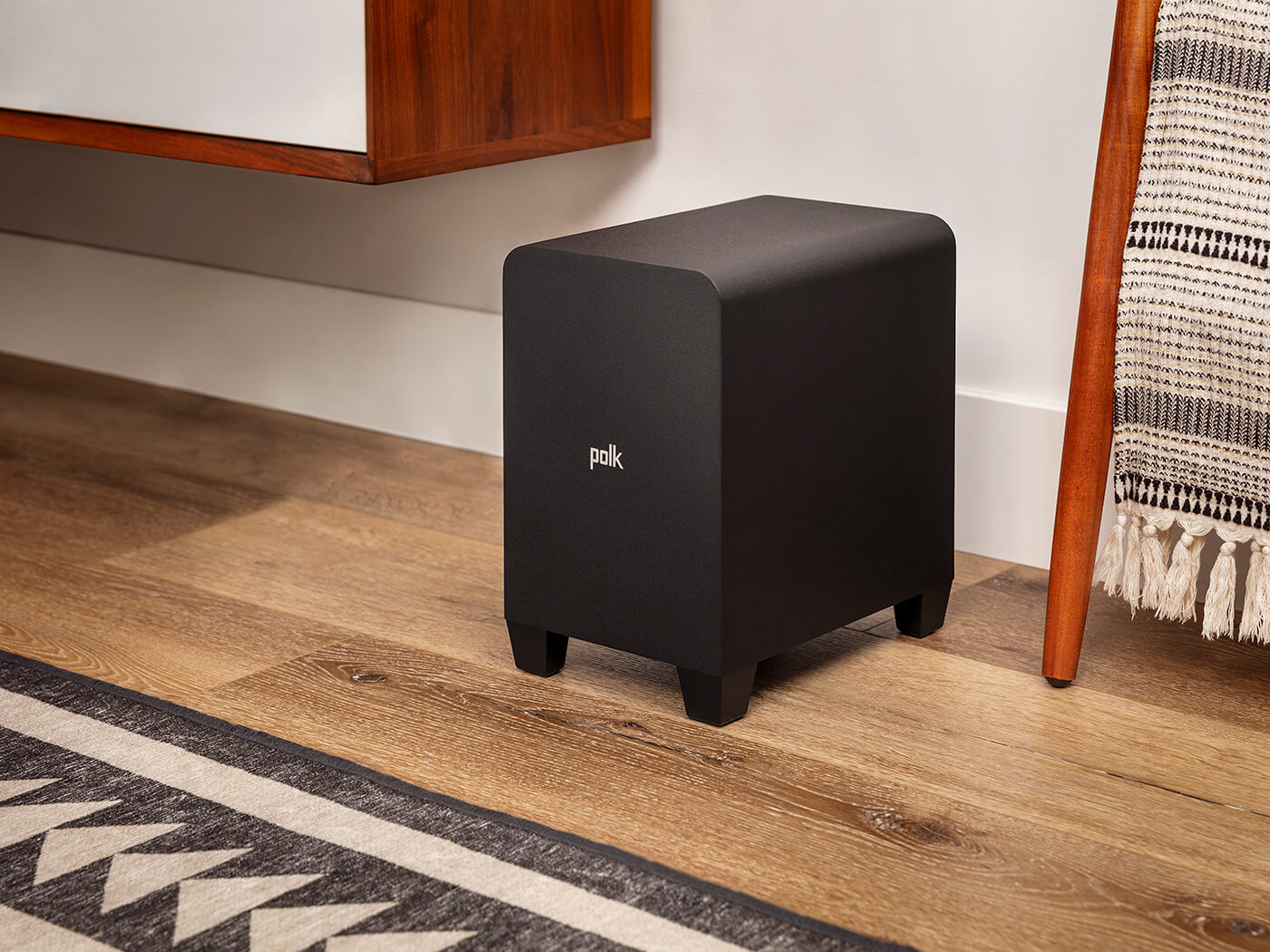