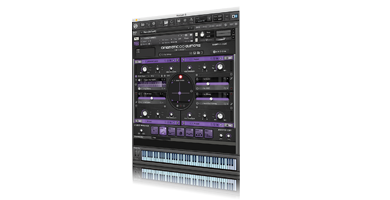 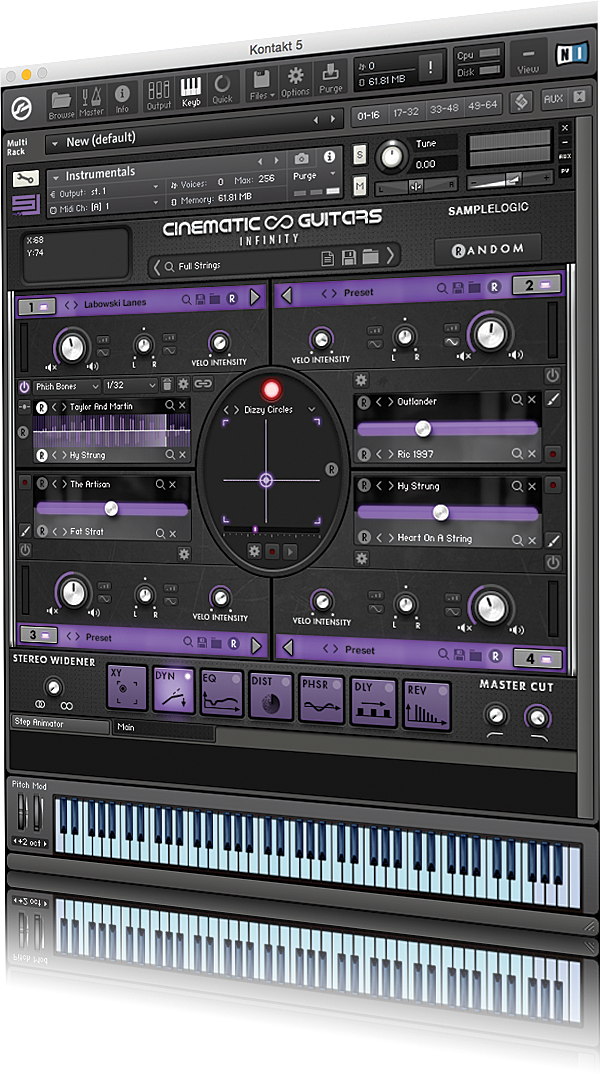 Guitars are one of the most sonically diverse instruments around, thanks to the vast number of ways they can be played, recorded and processed. When it comes to sound design, many of the most interesting uses for guitars don’t involve conventional playing techniques at all, which is where Cinematic Guitars comes in.

This latest release from acclaimed virtual instrument developer Sample Logic actually combines four collections into one location to create
a 25GB sample and synthesis-based monster that’s targeted at sound designers and composers. It runs in Kontakt Player free or full versions, and as such can be a standalone or a plugin-based instrument.

Four in One
What you get is all three Cinematic Guitars collections, plus the Infinity collection, which is a somewhat different beast. The first three increase in complexity and capability as you go, since each version is newer than the one before. Versions 1 and 2 are very serviceable collections of sampled and processed guitar sounds, and version 3 – which is in fact completely new – adds a lot more control in the area of effects and tweaking.

It also has a step animator for creating dynamic and sequenced patches, and all three collections are great for sound design and composition. There are sound beds, loops, textures and percussive patches, that range from deep and ominous through to bright and airy.

Clever use is made of effects to add depth and width to the sampled guitars, and many of the patches are altered so much that they don’t sound like guitars but more like ethereal synthesisers. 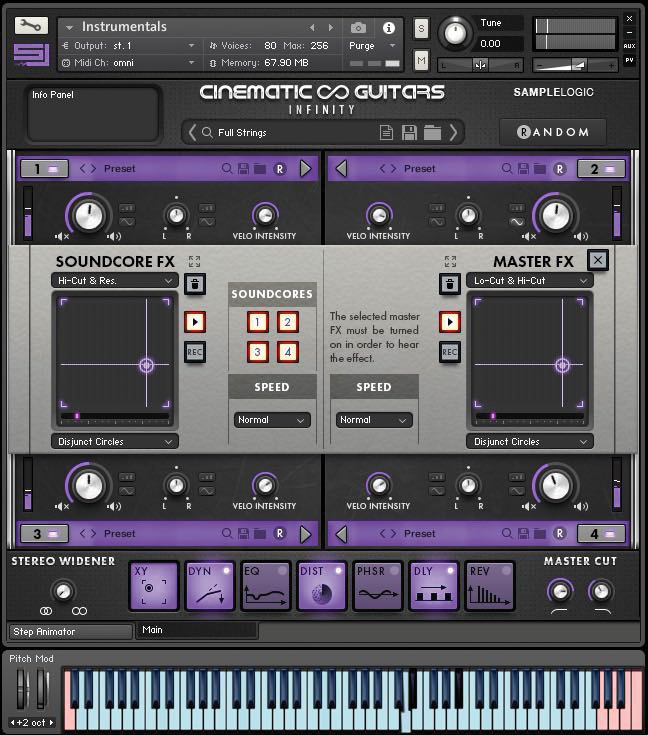 When you get to the Infinity instrument, things get really interesting. With a much more advanced design, it enables you to morph up to eight sound sources through four sound cores and blend them using the 3D mixer, which Sample Logic claims is a first for the Kontakt platform. The four cores orbit around a central mixer, and each one has identical controls and can be switched on or off.

For each category, there are presets that can be loaded for each core. Then there’s a volume control with a step animator for creating movement; a panner, also with its own animator; and another configurable animator section, where you can draw in steps, choose from presets or morph between two sequences.

Multiply these options by the four cores and you have a huge amount of flexibility.

Work in 3D
In the centre is the 3D mixer, providing a way to morph organically between all the active cores, which alter their luminance accordingly: a nice touch. You’re also able to record and play back movements in the mixer, and there are presets available for this, too.

In a second tab, the large step animator from CG3 is also available, so you won’t want for animation options. Moving down, you get to the effects section, with six effects – each with a control panel and plenty of knobs and buttons. A stereo widener is also available, and there’s a master cut section, as well as a randomiser button that will punch in all-new settings.

Sample Logic claims that between the various sections and combinations of settings there are more than 2,400 trillion possible setups in Infinity. While I’m not about to test them all, it’s pretty safe to say that there is an incredible amount of tweaking you can do at almost every stage of the instrument.

Many of the 750 presets are eminently usable straight out of the box and would fit perfectly into any TV, movie or game score – or indeed modern music production. It’s really nicely designed, too, with an advanced yet clear interface that pushes the limit of what’s possible with Kontakt.

To Infinity… and Beyond
If there’s anything to watch out for, it’s that you don’t get overwhelmed by the number of options. It’s sometimes necessary to solo one of the cores while editing it, so you can hear what effects your changes are having.

That’s not a criticism, more a way to ensure that you use the many sections to their full potential. It’s also often easy to make quick changes to get the result you want, such as moving the mixer or turning an animator on or off to calm
a patch down or liven it up.

This is a powerful, comprehensive scoring instrument with the depth of editing features that some users will require, yet a ‘plug and play’ immediacy that will suit those looking for cinema-ready sounds without spending too much time digging around. 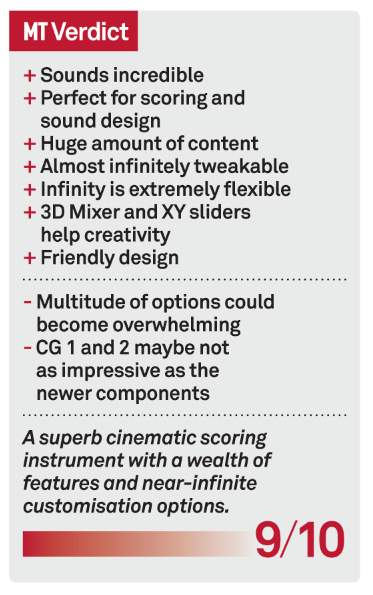