It’s may not look like much but this handy unit could be what your desk is missing. John Pickford fires it up… Details Price £659 Contact - 01799 520786 Web – chandlerlimited.com Amazon.co.uk Widgets Once upon a time when what we now know as vintage audio design was cutting-edge technology, the sound and reputation of a studio […] 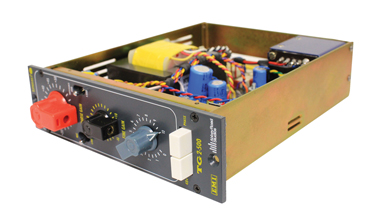 It’s may not look like much but this handy unit could be what your desk is missing. John Pickford fires it up… 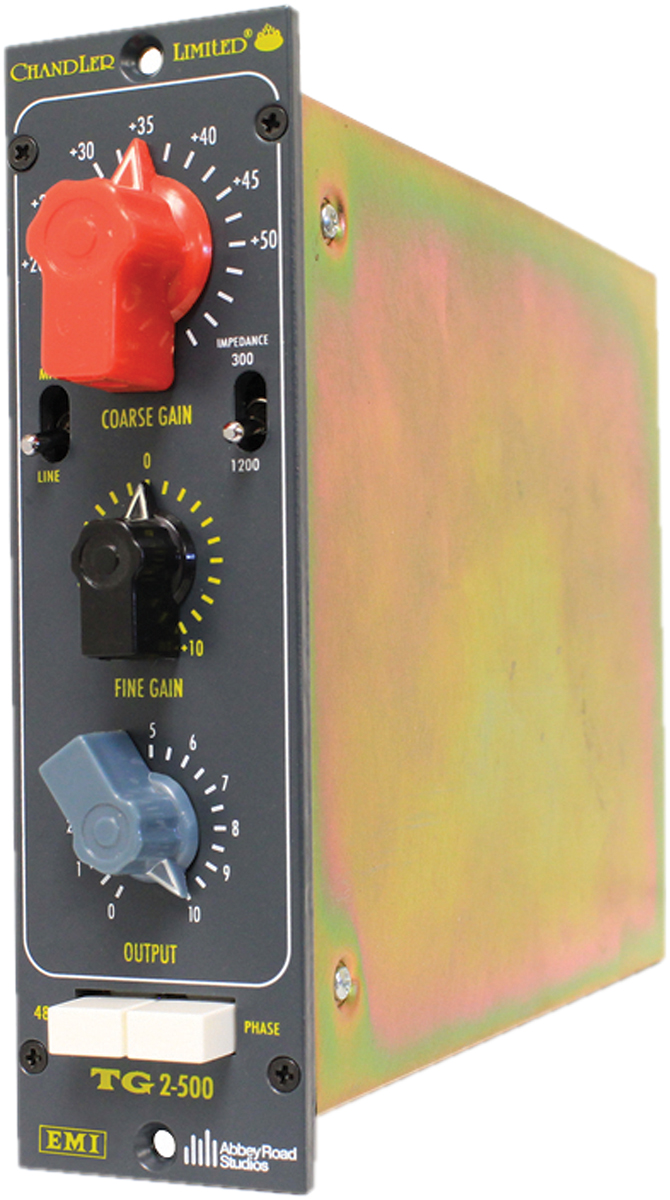 Once upon a time when what we now know as vintage audio design was cutting-edge technology, the sound and reputation of a studio was largely defined by its mixing desk. And a large part of the desk’s sound was defined by the character of its microphone pre-amplifiers. When EMI unveiled its TG12345 mixing console in 1968 it was very much at the cutting edge of recording technology.

Not only did it employ state-of-the-art solid state components it also featured 24 input channels and eight outputs, enabling eight-track recording – a far cry from the eight in/four out capability of the outgoing REDD.51 valve desk. 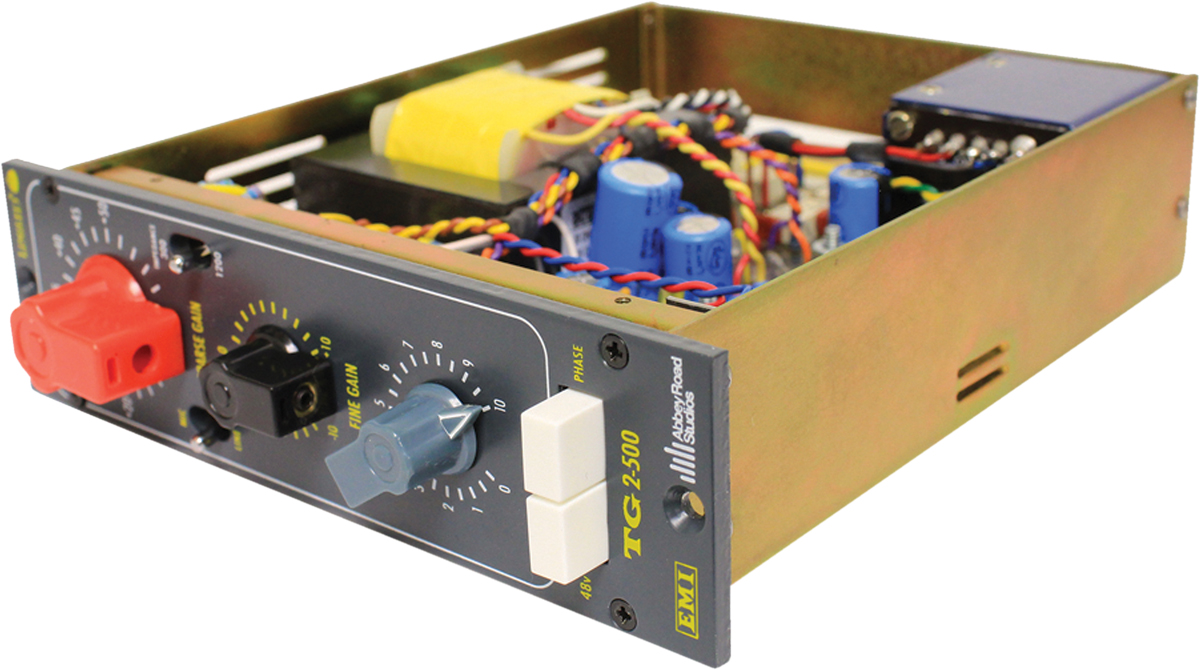 Classically Trained
As Chandler points out, the TG12428 preamp, on which the TG2-500 is based, was featured in EMI’s TG series of consoles that were used to record many classic albums, such as The Beatles’ Abbey Road (1969) and Pink Floyd’s The Dark Side of the Moon (1973) . Both of these records have a warm, smooth and clear sound that is the defining character of these preamps.

To hear for yourself, compare the sound of these recordings to Pink Floyd’s debut album and The Beatles’ Sgt. Pepper’s Lonely Hearts Club Band (both 1967) recorded on EMI’s earlier valve desk. All these albums were recorded in the same studios, with the same mics and largely the same outboard gear, yet the later TG-powered recordings have a much more modern sound that is obviously more ‘hi-fi’.

The TG2-500’s microphone pre-amplifier and line amplifier are discrete, transformer-balanced designs identical to the ones found in some of Chandler’s full-sized units, including the highly acclaimed TG2 Pre Amp / DI unit. Designer Wade Goeke, owner of Chandler Ltd, admits that developing the TG2-500 has taken a considerable amount of time with a number of engineering options explored before settling on the design we have here.

The time and effort seems to have paid off as the final product is a thing of beauty, built to the highest specification. Internally, the unit is very neatly laid out with top-quality components used throughout.

You Got The Look
Visually, the TG2-500 has an authentically vintage look that retains the battleship-grey finish of those legendary 60s and 70s desks. Chicken-head style controls are provided for Coarse Gain, Fine Gain and Output, further adding to the retro look. It’s not all about looking the part, though, and the briefest of use is all that is needed to reveal that this is a high-quality unit.

A small but robust switch is provided to select either microphone or line input, while a similar switch gives the option of an input impedance of 300 or 1200 ohms. Two push-buttons are situated at the bottom of the front panel to select phantom power and invert phase, respectively.

So, Chandler have got the look and feel of the unit right, deftly avoiding the clutter and fiddly nature that plagues many lunch-box designs, but what about the sound? Well, it was immediately obvious that the TG2-500 is one serious preamp.

Plugging in an AKG C414 to listen to some spoken words from a familiar human voice – always a good test of a unit’s true nature – revealed a very pleasing and slightly euphonic character that is just on the bright side of neutral. Compared with the mic preamps in our DDA console, the TG2-500 gave a larger-than-life sound that made the desk channel sound a tad flat and utilitarian.

Later, when using the unit to record music, the TG2-500 proved to be an excellent performer capable of capturing the fullness of bass instruments as well as the detail of treble-heavy source material. The slight upper-mid and top-end emphasis imparts a presence that sounded particularly good on guitars, both electric and acoustic, and on certain vocalists. Recording a lead vocal with our Neumann U 67 gave superb results, the forward nature of the TG2-500 complementing our dark-sounding Neumann perfectly.

An A/B test alongside our reference Earlybird valve preamp highlighted this characteristic, revealing the TG2-500’s glossy upper registers to be somewhat more obvious than the more even-handed and sweeter high frequencies of the valve unit. Still, the high-frequencies are clean, clear and extended, the unit displaying a gently rising response that accentuates sheen rather than sparkle.

Low frequencies are dealt with superbly – the preamp can handle sub-sonic audio with aplomb and there are no audible lumps and bumps in the mid-bass region where inferior products sometimes hype the response to give a false impression of depth. What you get is a firm, deep and taut bottom end that has plenty of punch and grunt. The broad midrange is open, vivid and well lit, with a bright characteristic that manages to remain nice and smooth without any harsh side-effects.

Modern Vintage
During our time with this new-but-old Chandler design we recorded a wide variety of instruments and voices using several different types of microphone. It didn’t seem to matter whether we used an inexpensive dynamic type or one of our classic condensers, the TG2-500 sounded great on everything we fed it. And with 60dB of available gain, even our insensitive Coles 4038s didn’t make it run out of steam. 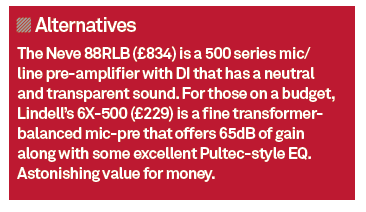 Although the TG2-500 has no EQ or filters of any kind, a certain amount of tone control can be achieved by experimenting with both the impedance settings and the output of the unit in relation to the input signal. Selecting 300 ohms brings out the punch and solidity of the Chandler’s sound, while the 1200 ohm option offers a more sprightly tone with an extended, airy treble. A certain amount of edge can be achieved by driving the unit’s input gain hard and lowering the output level – the cleanest tones are produced with the output at maximum and moderate input gain.

Sound Choice
This new Chandler preamp is a welcome addition to the 500 series format and will undoubtedly be a hit with lovers of grown-up analogue sound, especially those who have limited space for outboard equipment.

And while the amount of precise gain control on offer is impressive, that is all you get – apart from phantom power and phase reverse there are no other features such as a pad, high-pass filter or DI input that you often find on microphone preamps.

That said, what you get for your money is a lot of superlative amplification with an impeccable heritage, one that you’d have to traverse many zebra crossings to equal. 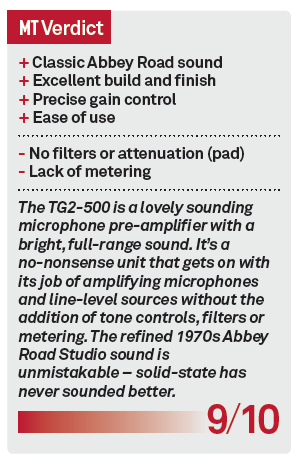 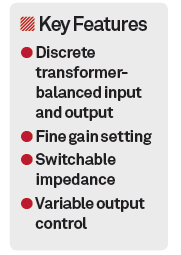