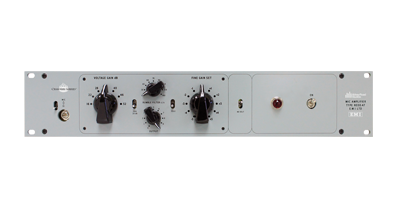 REDD consoles powered The Beatles’ Abbey Road records. John Pickford checks out the new Chandler preamp based on them…

Throughout the 1960s, EMI’s Abbey Road recording studios were at the forefront of sound recording innovation. Their Record Engineering Development Department (REDD) was responsible for designing the REDD.51 valve mixing consoles that were in use from 1964 to 1968, and used to record most of The Beatles’ classic albums, including Rubber Soul, Revolver, Sgt. Pepper’s Lonely Hearts Club Band and the ‘White Album’.

The REDD.51 was a replacement for the similar REDD.37, the main difference being the type of line amplifiers that the consoles utilised. The earlier consoles employed Siemens V72S amplifiers, while the modernised REDD.51 contained the in-house-designed REDD.47. For the full REDD.51 story, read our Studio Icons feature

Chandler has previously issued several units based on EMI/Abbey Road designs, including the recently-reviewed TG 500 Pre Amp. Until now, Chandler has focused on solid-state equipment based upon EMI’s TG series of consoles launched in 1968 (check our TG123245 Studio Icons feature), but has now begun to revisit the earlier valve-powered hardware. Chandler’s Wade Goeke, the designer of the new REDD.47, uses the same mixture of pentode and triode valves as the originals.

However, it’s not an exact clone of the vintage unit. The original amps were small rectangular boxes that slotted into the sides of the REDD.51 consoles, featuring a simple three-position gain switch that allowed the selection of either 34, 40 or 46dB of gain; a separate screwdriver-adjustable trim-pot was provided for ‘Fine Gain Set’. The main control for input gain and the output fader were on the console.

This new REDD.47 is a 2U 19-inch rackmount unit with an authentic, vintage EMI look. The casing is finished in a battleship-grey colour and the chicken-head style knobs are replicas of those found on the original REDD consoles.

In true vintage style, the REDD.47 includes a rumble filter, which in today’s parlance would be a high-pass filter. This is a unique, inductor-based filter that provides eight low-cut settings between 30 and 180Hz via a stepped switch.

A final chicken-head knob is provided for Output Control; if only there was room on the front panel for a REDD.51-style Painton quadrant fader!
A major addition to the REDD.47 is the provision of a DI input on the front panel.

This uses the EF86 pentode valve which, says Goeke, gives a similar effect to plugging into a Vox AC30, a classic guitar amp also associated with The Beatles. A toggle switch on the front panel engages the DI when it is flipped downwards, while further switches for a 20dB pad, pole (phase reverse) and 48V phantom power operate in a similar way; they are engaged when in the down position.

On the rear panel, XLR connectors are provided for Mic/Line Input and Output, which are transformer balanced, and there is a socket for an IEC mains lead. Unlike the original units, which took their power from the REDD.51’s main power supply, the new REDD.47 has an internal power supply.

First Impressions
On first inspection, it was clear that Chandler has got the look and feel of the unit just right. Even though it’s not an exact copy of a vintage unit, it certainly fits in with original REDD designs of the 1960s. The front-panel markings are in the same style as the original EMI units and the chicken-head knobs feel smooth yet purposeful in use.

Obviously, we didn’t have an original REDD.51 console on hand for comparison purposes, as only a handful were built and only one is known to have survived. While it would be tempting to get all misty-eyed and imagine that everything we recorded through it sounded like The Beatles, we were able to identify the unit’s character – which certainly reminded us of those pre-1969 recordings.

The back panel houses XLR connectors for Mic and Line Input and Output. The REDD.47 has an internal power supply

Compared to Chandler’s solid-state TG-500, which has a very smooth yet bright tonal balance with a firm low end and silky upper frequencies, the REDD.47 is a bolder-sounding mic-pre with a slightly mid-forward character. The upper frequencies are glossy rather than silky and the low end is big and muscular, delivering plenty of low-end heft, if not quite as solidly as the transistor-driven TG.

The best way to hear these differences for yourself is to compare The Beatles’ ‘White Album’, recorded on the REDD.51, to Abbey Road, recorded on the solid-state TG console. Bear in mind that both of these classic albums were recorded in the same studio onto the same 3M 8-track recorder, using the same mics, and yet they sound completely different. The ‘White Album’ has a punchy character with a present and in some places biting midrange, while Abbey Road is a much smoother and, in some respects, more ‘hi-fi’-sounding recording.

During our time with the REDD.47, we used it to record a wide variety of voices and instruments, using several models of microphone known to have been used by EMI’s engineers during the REDD era. Although we didn’t have access to a Neumann U48 (essentially an EMI-modded U47), we were able to use our U47 FET, along with the brilliant Fairchild 660 limiter UAD plug-in, giving us a pretty good recreation of the classic EMI/Beatles vocal chain.

Although our vocalist didn’t sound particularly like John Lennon or Paul McCartney (nor, thankfully, Ringo), the up-front, edgy tone of the REDD was instantly recognisable, especially when we removed the preamp from the signal chain and plugged into our DDA console with transistorised mic-pres.

Beatlemania
We also used our valve Neumann U67 with the REDD.47 to record some piano, knowing that this set-up was used for the distinctive piano sound on the classic Sgt. Pepper track A Day In The Life. The slightly dark-sounding U67, coupled with the rounded nature of the REDD.47, delivered a good deal of the character of the classic recording, considering we were recording a completely different piano.

Mention should also be made of the excellent DI input, which sounded gorgeous when we plugged in a Gibson EB bass guitar, driving the EF86 input tube. We didn’t have a Höfner violin bass (like Paul McCartney’s) to hand, but we thought we’d taken our Beatles experiments far enough anyway.

In Use
For our Beatles-inspired vocal chain, we plugged in a Neumann U47 FET mic to the REDD.47 and cranked up the Voltage Gain to almost maximum. Boosting the Fine Gain control added a lovely chesty quality with some nice tube-saturated edge.

Feeding in our Fairchild 660 limiter UAD plug-in, we were able to produce a wonderfully present vocal with plenty of raw excitement. Sadly, Sir Paul McCartney was unavailable for the test. 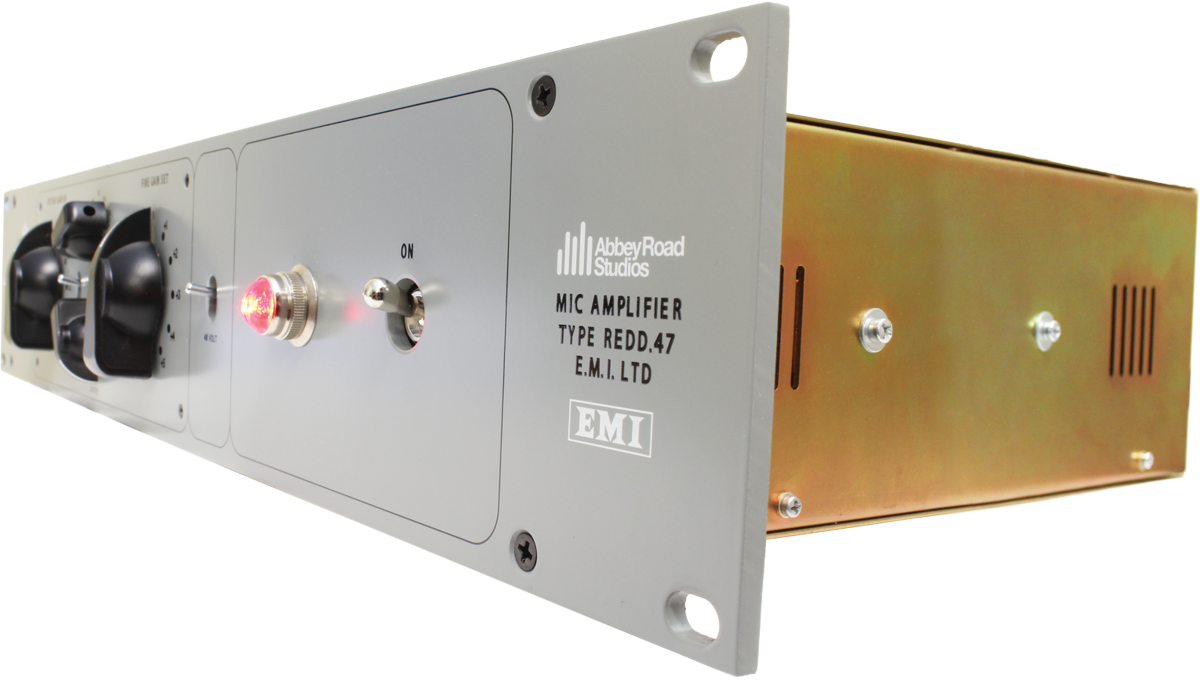 Alternatives
Chandler’s TG-500 (£659) is a recreation of the solid-state mic preamp found in the TG series of mixing consoles that replaced the valve-driven REDD.51. Its sound is smoother, if less characterful, than the REDD.47.

Neve’s 1073 DPX (£2,749) is a modernised version of its most revered vintage design. It’s a two-channel unit that comes with EQ and comprehensive metering.

Hard Day’s Write…
It’s hard to review a product such as this without banging on about The Beatles. However, many potential buyers will want one precisely because of those links. Of course, EMI recorded all sorts of music through REDD consoles, and for every critically acclaimed band such as Pink Floyd (who recorded most of their first two albums through the REDD.51), there were dozens of easy-listening and other naff recordings that were produced at Abbey Road.

What we’re getting at is that using a REDD.47 won’t make you Beatles-esque any more than using a Fender Strat will make you play like Jimi Hendrix! That said, the punchy, up-front and unmistakably vintage tone of the unit is instantly recognisable to anyone familiar with those 1960s recordings.

On another historical note, and to play devil’s advocate, it’s worth remembering that when the next generation of solid-state consoles arrived towards the end of the 60s – Neve and Helios, for example – many engineers couldn’t sing their praises highly enough, presumably believing they were superior to the outgoing valve desks. It may well be the case that those engineers were caught up in the excitement of progress, with the introduction of eight-track and, soon after, 16-track recording, which revolutionised the whole multi-track recording process.

From a purely sonic point of view, the REDD.47 has the authentic EMI sound that has been unavailable for almost half a century, which is altogether more ballsy than the myriad Neve clones.

On a final note, the legendary Geoff Emerick, who engineered many of The Beatles’ most revered recordings, has apparently used Chandler’s REDD.47, and his view was: “They have that sound!” Who could argue with that?