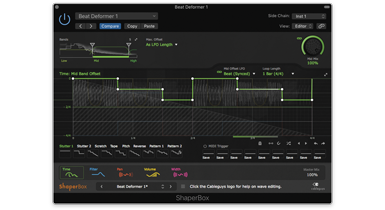 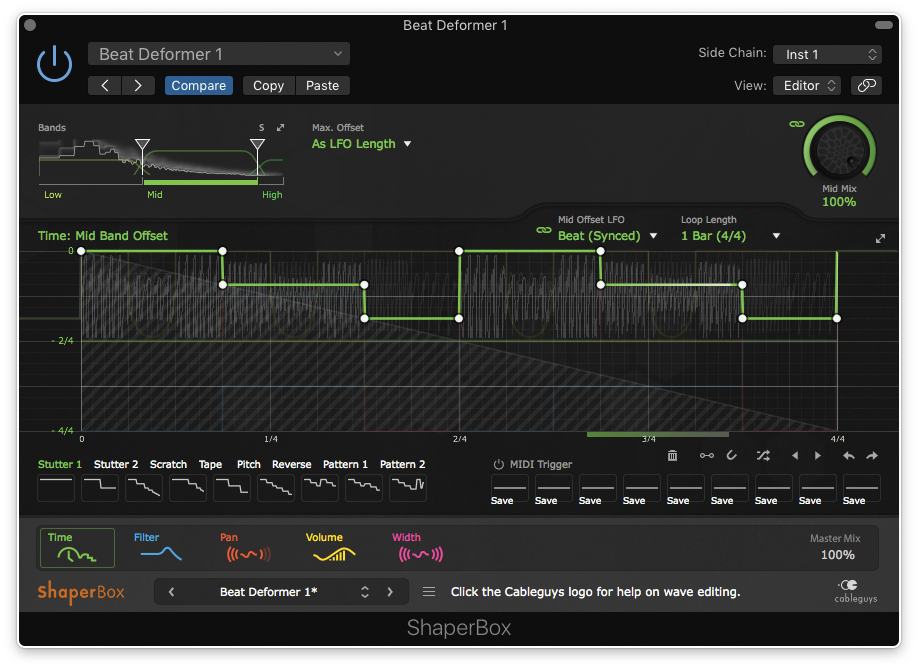 We’ve been using Cableguys’ VolumeShaper plug-in for quite some time as a means to get precise, multiband ducking on certain mix elements. Fast becoming known as masters of the curve, all Cableguys plug-ins share clean GUIs with easy-to-use drawing tools for inputing and editing complex LFO shapes.

With the release of ShaperBox, there’s now a simple effects rack that can host up to five individual effects, including new versions of VolumeShaper, PanShaper and FilterShaper – plus brand-new WidthShaper and TimeShaper effects.

You can opt to buy single Shapers that are hosted within ShaperBox and add the others at a later date, or to buy the whole bundle in one. The order of the effects can be easily rearranged, or individual modules bypassed, with a master wet/dry mix control and an extensive, well-catalogued preset system that contains single and mixed presets.

The beauty of having all the effects in one shell is that they share GUI layouts, so everything quickly becomes intuitive as you move between modules. Each has a grid in the centre where you can click and drag nodes to build up complex curves, with various drawing tools and a randomise button.

There’s also a zoom to fill the GUI with the grid for more precise edits and various keyboard modifiers give you different amounts of control and a snap function. With the exception of FilterShaper, all FX can be split into three frequency bands, which greatly increases the creative potential, and helps pinpoint or exclude certain elements in the audio.

All Shapers also have a range of preset curves and a new MIDI Trigger section, which allows you to quick-load up to nine specific curves into specific modules, via MIDI notes. This is a welcome performance touch, although it’s a shame it works on individual effects and you can’t jump between nine complete racks.

As VolumeShaper and PanShaper have been updated fairly recently, their upgrades are mostly just cosmetic, with PanShaper now running horizontally instead of vertically. FilterShaper Core is essentially a cutdown version of FilterShaper 3 and includes 18 clean and Sallen-Key, analogue-sounding filter types.

All three can be used for sidechain pumping, adding stereo movement and for squelchy filter sequences, but what about the new kids on the block? TimeShaper is an exciting effect that places the timeline on a diagonal curve, and then lets you bend, speed up, slow down, reverse, and chop sections of your audio depending on how you draw.

It’s a little hard to get your head around how it works at first, and fine-tuning pitch changes can be fiddly, but there are some great presets to get you going. You can create glitches, rearrange breaks, and add tape-stops and DJ scratches, all in multiband. We initially found using certain sounds resulted in clicks at the step points, but Cableguys has just released an update that greatly reduces this.

Finally, there’s WidthShaper, which offers unprecedented control over the width of your tracks. You could draw in a specific shape to target the midrange of a snare on a certain beat, have a synth slowly swell over time, or pump the stereo width in time with the beat, while leaving the low-end untouched.

Image Line’s Gross Beat (€89) is similar to TimeShaper and has more performance options, but lacks the multiband operation. Alternatively, Sugar Bytes Looperator (€119) has filter FX, scratch FX and lots more, with an easy-to-use GUI but less control over the actual curves.

As a package, ShaperBox is a fun and cohesive collection with a nice, clean GUI. The only things we’d like to see are some sort of offset/range dial to quickly edit and perform the overall placement of the curve, especially for FilterShaper, and a final volume/makeup gain control, as using the effects stacked together often loses volume 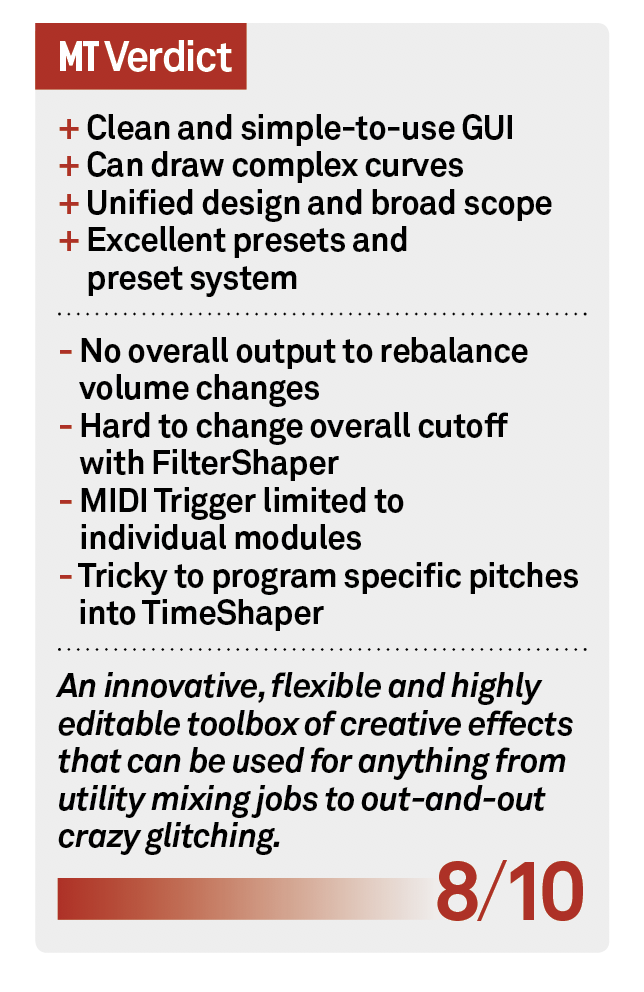