Two of Avantone Pro’s most popular valve condensers come together in the new BV12. Huw Price checks it out.   Details Price  £925 Contact SCV London  020 8418 1470 Web www.avantonepro.com Avantone is among the most well-established modern microphone brands. Its CK12, with circuitry based on the Sony C800G, has built a solid following for its […] 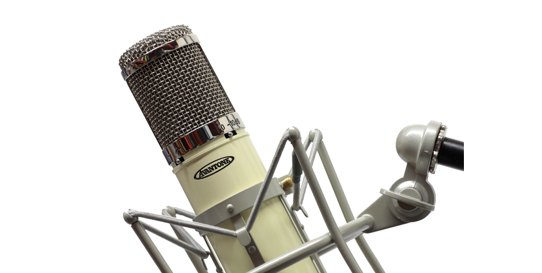 Two of Avantone Pro’s most popular valve condensers come together in the new BV12. Huw Price checks it out. 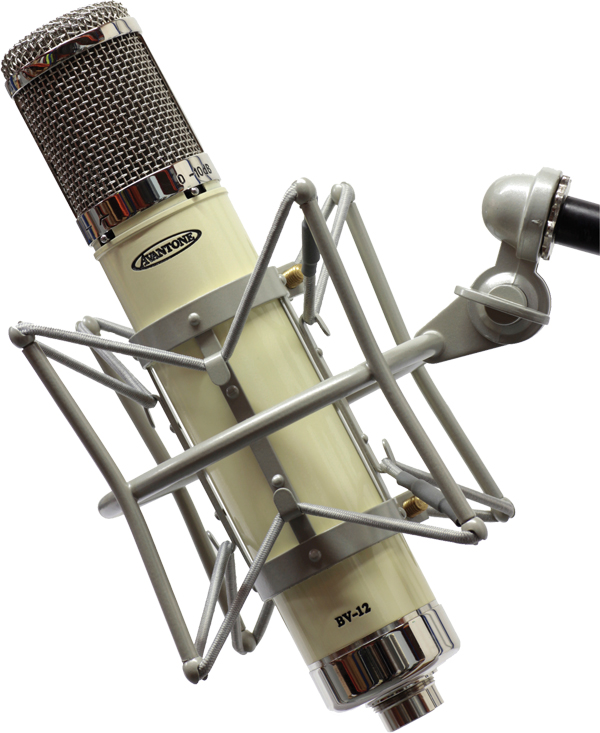 Avantone is among the most well-established modern microphone brands. Its CK12, with circuitry based on the Sony C800G, has built a solid following for its clean, detailed highs. Meanwhile, the Avantone BV1 bottle mic can count the likes of Robert Plant as fans of its fatter lows and chewier mids.

So one day, the guys at Avantone decided to drop a BV1 capsule into a CV12 body to combine the best of both mics. They liked what they heard so much that they developed an entirely new mic called the BV12, which also boasts a 6072 valve upgrade. You even get a length of Mogami cable to connect the audio output from the PSU to your mic preamp. Sensitivity is raised from -35dB to -38dB.

Body of Evidence
Cosmetically, the BV12 is in a different league too, with a lovely buttermilk enamel body and nickel-plated top and base. Although the hardware is manufactured in China and closely resembles many of the Alctron mics, the metal grille used for the capsule housing has a different mesh count and many consider this an important contributing factor in the sound of any condenser microphone.

The flightcase edges are finished with mock-croc leatherette trim with a tweed fabric covering – somewhat reminiscent of a 50s Fender guitar case. An oak wood box contains the microphone and the form-fitted interior accommodates a shockmount and a power supply that’s coloured to match the body of the microphone.

The kit also includes a generous length of cable to interconnect the power supply with the mic, plus an IEC mains cable. Best of all, there are attenuation pad and bass roll-off switches. Clearly, a considerable amount of effort has been made to optimise sound quality, provide a wide range of useful features, and generally create a fine-looking product. But, of course, it has to deliver on sound quality, too.

Go Compare
Testing microphones in isolation isn’t particularly informative and wherever possible we try to make simultaneous recordings with similarly spec’ed/priced mics, so the obvious ‘competitor’ had to be its stable mate – the CV12.

The major differences between these two microphones are the power supply, the capsule and the valve, so we decided to swap the CV12’s 12AX7 for a 12AY7 to level the playing field. After balancing the volume levels of the simultaneously recorded audio samples we must confess that we found it a struggle to tell them apart. Maybe the BV12 had an extra hint of air in the upper treble and tiny bit more weight in the low end, but there was barely anything in it.

Next we put the BV12 up against our modded Alctron HST-11A with its edge-terminated capsule and 12AY7 valve and the differences were much easier to discern. Since it’s no C12 clone, the BV12 doesn’t produce that glistening treble sheen. There’s detail aplenty but the BV12 focuses on the midrange and, to be fair, captured a more natural sound.

On a Roll
This has plus and minus points. On the downside, the BV12 wouldn’t necessarily be the best choice if you need instruments such as acoustic guitar and cymbals to float over the top of a mix. However, there’s more than enough presence to provide clear vocal definition, with the ultra-smooth mids flattering vocals and rolling off the sharp edges from electric guitars. The low bass is sonorous but also well defined, with the 80Hz bass roll tightening up the lows while allowing the treble to breathe more freely.

The BV12 is a vintage-inspired microphone that shares sonic characteristics with various classic industry standards, while at the same time having a voice of its own. It surpasses many of its direct competitors in terms of features and sound quality, but we are obliged to observe that its closest relative runs it uncomfortably close.

A well made and fine-sounding valve condenser with useful features and fine looks.