The Sequential Circuits Inc Pro-One has sealed its place in history as a monophonic version of the Prophet-5. Surely there’s more to it than that? Dave Gale enters
the mod matrix to find out… 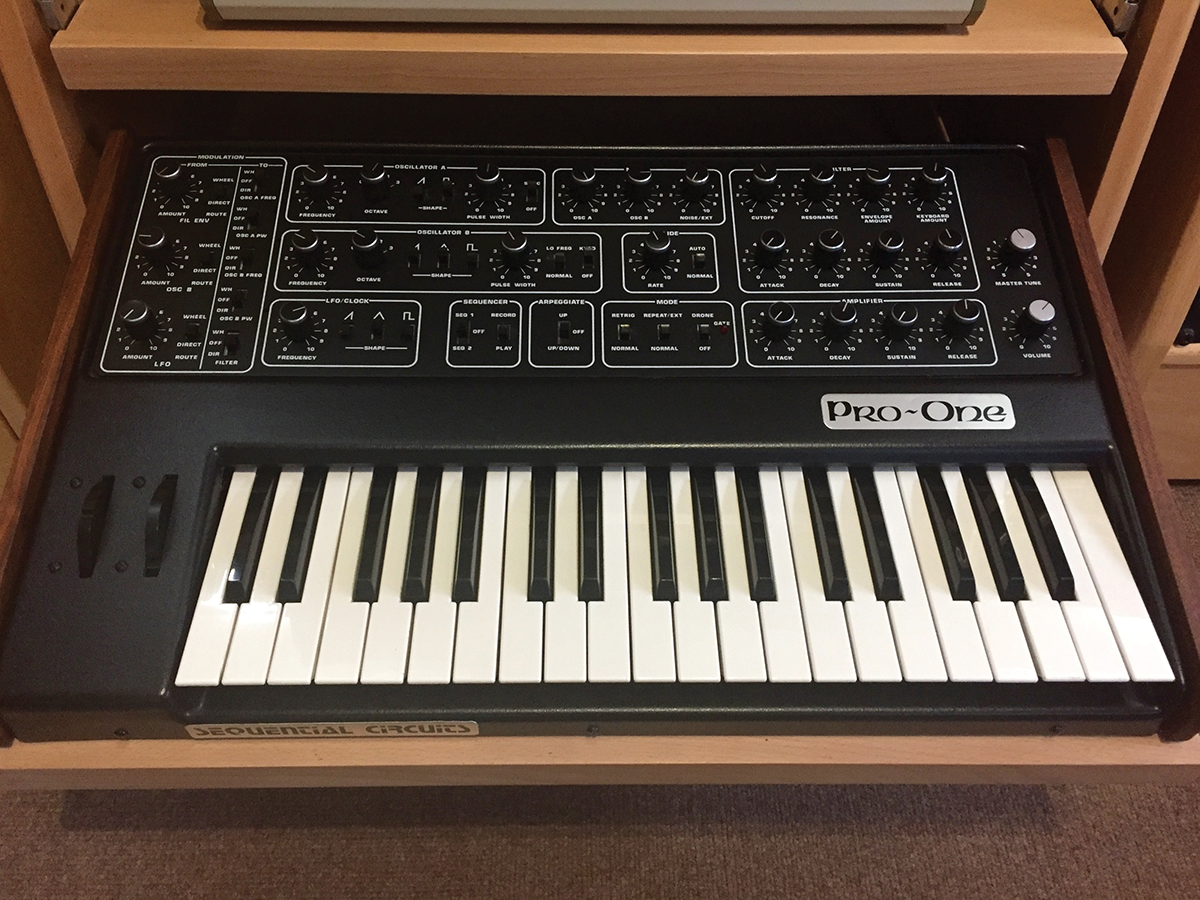 Despite the hindsight that springs forth about the 1980s being the ‘me’ decade, I still look back with the fondest of memories, particularly to the earlier part of the decade, where there was a veritable hotbed of activity relating to the production of these now-classic synthesisers.

It’s easy to think that the Japanese had it all sewn up at this point, with the likes of Korg and Roland producing a multitude of great affordable synths, many of which were polyphonic, but the American tradition in great synths also continued during this period, as started by the likes of Moog and ARP.

There was never a better time to play ‘spot the synth’ on the tele-box, as most machines from that time had the legend firmly emblazoned on the back of every machine, and no moniker was more mystical (at least in my head) than Sequential Circuits Inc.

This company saw the rise of synth legend Dave Smith – the SCI name emanated from the first run of products, which largely focused on sequencer or drum-machine designs, but the groundbreaking SCI synth came in 1978, in the shape of the Prophet-5.

A five-voice analogue synthesiser which had patch memory allocations, it was the answer to many keyboard player’s dreams; in fact, a friend of mine who was a gigging session muso from that time cites the Prophet-5 as being the only machine that was needed back then, as it pretty much did everything that was required. So you could question the decision to make a monophonic version of the Prophet-5, which is the over-simplified description of what the Pro-One represents.

Produced from 1980 onwards, the Pro-One is thought to be the first professional-grade synthesiser that hit the ‘below $1,000’ price point – which it did by quite some margin, initially selling for $645, but rising swiftly to $745. Given the affordability of the Pro-One, something had to give, and it’s no surprise that the build quality of the Pro-One came in for a lot of criticism, and was nowhere near the polished finish of the Prophet-5.

Some years ago, I was working with a friend of mine, from a well known and successful indie band, and while assisting in some studio maintenance-style duties, noticed a lowly Pro-One in the store, looking unused and up-ended. There it stayed for about 10 years, until the owner decided to sell it on to me: at which point, I began to fully understand the build quality as it required a little maintenance to get it going.

The casing of the Pro-One was moulded plastic, formed from two pieces that slotted together, forming the base and lid sections. The circuit board was mounted to the underside of the casing with an overlay on top, to act as the legend for the control panel.

The pots and switches were not what you might call weapons-grade, but they were good enough, and certainly better than the keyboard… Oh dear, the keyboard.

The Pro-One had two incarnations of keybed, the latter being a troublesome membrane affair, which was the replacement for the also-troublesome J-wire keybed. My model has the J-wire, which was identifiable by turning the keybed over, to discover lots of wires under each key. 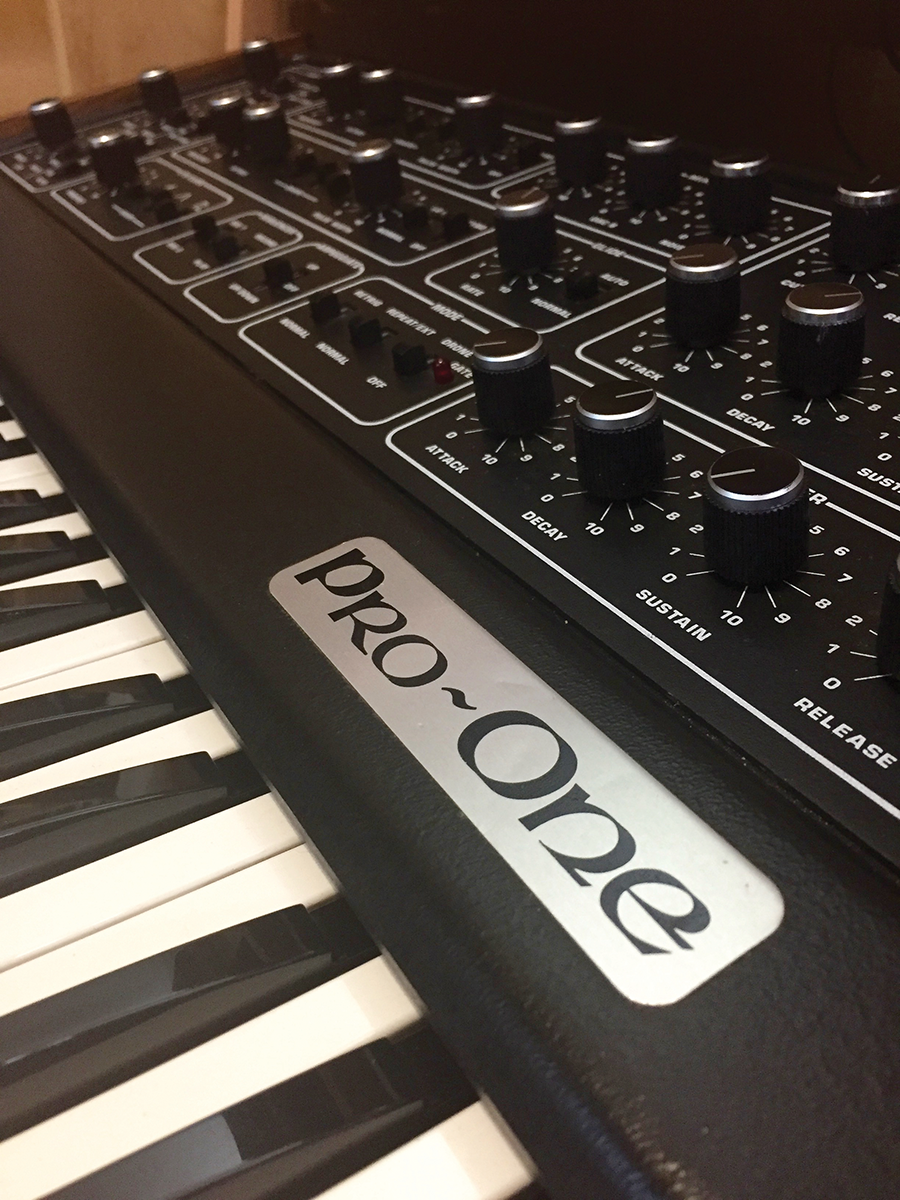 Essentially, by pressing a key down, the wire under the key makes contact with another wire that runs along the length of the keybed, hence completing the circuit. When I discovered this design, I had to stop and scratch my head for a while. “Surely it can’t be that crude and simple?” I asked myself. Well it could, I’m afraid, and Pro-One keyboards have gone down in history as being pretty unreliable and liable to degrade with time.

Strange that the J-wire is thought to be the preferred option as, thanks to its simplicity, it is at least easy to fix, and fix you will need to if you have one that you use regularly.

I realise that at this point I’m not exactly selling the Pro-One, so now’s the time to change tack. Like the Prophet-5, the Pro-One made use of Curtis chips in the oscillator section, which were pretty reliable; although with age, these could develop faults, in common with other synths from this period.

In terms of signal flow, the Pro-One was based around two VCOs, which could also be mixed with either an external signal, or white noise. The VCO offered the usual timbral suspects, namely Saw and Pulse (with width control), with an additional Triangle being available on VCO 2. They were syncable and VCO 2 could also operate in Low Frequency mode, although there was also a dedicated LFO, so VCO 2 did not have to be removed from tonal duties to add vibrato.

To be fair, it was a pretty comprehensive VCO section. The mixer then fed into the VCF, via a mixer section, which was fixed as a four-pole Low Pass affair. There was the nice addition of two full ADSR envelopes, assigned to amplitude and filter; however, several of these elements could all be bought into play, for the purposes of further modulation.

The big draw of the Pro-One over other mono competitors was not so much down to the fact that it was a single-voice Prophet-5, but more to do with its comprehensive modulation section. The Modulation matrix was unique to the Pro-One, and allowed the user to assign the Filter ADSR Envelope, VCO 2 and LFO in the direction of a number of elements, which included Oscillator pitch, pulse width and filter, and more than one modulation at a time.

This made for a unique section, that could create wonders and extremes in equal amounts. Soaring sync-style tones and beautiful PWM-based basses were all within perfect reach, so it was no surprise that the Pro-One had its fans.

Vince Clarke was possibly the most present and infamous Pro-One admirer, using it exclusively on the Yazoo album Upstairs At Eric’s. The synth-pop hit Don’t Go could be a demo for the Pro-One, as reputedly every sound on that track is from the Pro-One. Other Pro-One users included Tom Bailey of Thompson Twins, where the Pro-One was used for many of their basslines.

Worth noting that many people believe the Oberheim OBX-a took this role; or so I read in a mag at the time of Quick Step And Side Kick, where Tom spills the beans on synth usage (maybe the Pro-One replaced the Oberheim, when it broke down, which regrettably it did frequently!).

Probably in part thanks to the SCI roots, there was also an inbuilt Arpeggiator and Sequencer. They were both plain and very simple, with the Arpeggiator offering only Up and Up/Down over the course of the notes that were played, with no range control.

However, the Sequencer had two volatile memories, both of which could capture up to 28 notes in step. I mean, 28 – that’s not even 32! I’m not sure of the wisdom here, but it probably had something to do with triggering the notes in sequence from another source, which could account for the lesser note count!

Throw in some Glide and Drone functionality, and that just about covers it, but that’s not to diminish the value of this early 80s classic. The sound it makes is pretty damn awesome and with the harsh filter and very fast envelopes, this was a machine of choice for many, to create great drum and percussion noises. As we’ve discussed in this magazine before, not all white noise is the same.

The Pro-One’s White Noise is full of crunch and body, and perfect for those big snare-like tones, rather than anything wispy.

The Droning and the Gating

One curious section on the Pro-One is the Mode section, which offers up the option for Drone mode, where it will do exactly what it says. This is a good place to start if your keybed is playing up, as it will enable you to start tweaking… admittedly without the gate signal. 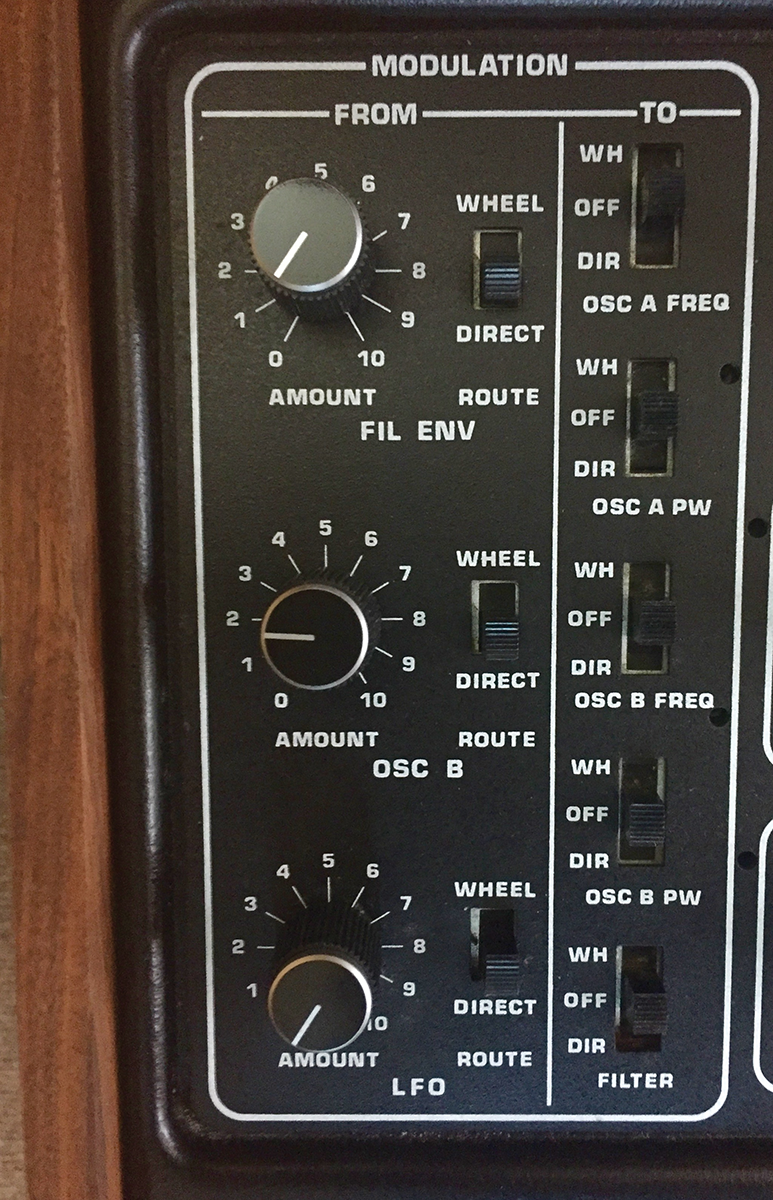 Talking of which, the same section also has a ‘Normal/Repeat’ toggle switch, the purpose of which is to set the gate triggering, in time with the LFO clock. This is a pretty cool feature and, thanks to jack points on the rear panel, will allow for clocking from external sources.

If 80s basslines are your thing, this will radically improve your life – ensuring that you don’t suffer with the inducement of RSI from the continuing repetition that comes with 80s basslines!

The 80s was really the time when the Japanese synth companies came into their own, so it’s no surprise that all the major contenders came from Japan. The Roland SH-101 was considerably cheaper, but was a single-oscillator monosynth that offered a single voice in the style of a Juno, which is to say that it had multiple waveforms available simultaneously, rather than via multiple VCOs.

It did, however, lack the modulation capabilities, just offering the basics that one would expect, but it also had a Sub Oscillator, which gave it some serious grunt. The Korg Mono/Poly, on the other hand, offered four independent VCOs, and as a result, was capable of some very interesting modulation routing, thanks to its strangely titled Effects section.

They weren’t effects, in the conventional sense, and were more about modulation and syncing, and here there is a similarity to the Pro-One. Arguably the predecessor to the Pro-One crown would be the ARP Odyssey. Produced some 10 years earlier in various incarnations, it also has a place; and, thanks to the reboot from Korg, is available for sensible money in a far newer version and it sounds and feels great.

I would miss my Pro-One if it were removed. Full of character, largely thanks to the Modulation Matrix, it has something to offer when you need a great reliable analogue tone source.

In my setup, it is largely being triggered via my DAW, so fortunately, I don’t have to use the keyboard, which could be a dealbreaker, because it’s not great! But looking beyond that, it’s a highly creative tool which still offers far more than most monosynths, for a very reasonable price.