Dedicated looping devices are becoming increasingly common as competition hots up. Liam O’Mullane finds out more. Details Price £529 Contact Roland – 01792 702701 Web – www.roland.co.uk Loop-based recording has been commonplace both in studios and the live world for quite a while, but the technology behind the live side of things has been slow to develop. […] 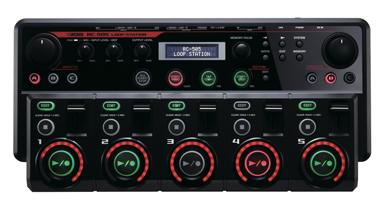 Loop-based recording has been commonplace both in studios and the live world for quite a while, but the technology behind the live side of things has been slow to develop. Artists like Ed Sheeran have helped to bring the art of live, sound-on-sound looping to the mainstream as he layers percussive and melodic guitar sounds to provide a backing to sing over. Ed uses a two-track looper called the RC-30, from Boss, to great effect. Like most options out there, this is a floor pedal, and although they can be placed on a desktop for hand operation, they don’t have the best feel and require a fair bit of strength to operate.

With a history of creating many of the tools that helped to shape the looping scene, Boss has now released the RC-505, which is the company’s first desktop-oriented unit. It’s a device that has soft-touch buttons for its main multitrack functionality.

Track Count
The RC-505 has five separate tracks for loop recording and infinite additional overdubbing. The layers have undo and redo functionality for those less than ideal takes, and these functions are all within easy reach. Tracks can be recorded, triggered and stopped using the main round play/record button per track, but a very short fader per track enables you to balance your playback levels or abruptly bring tracks in or out in DJ style. These both offer a good level of control, enabling a dynamic performance arrangement.

Capturing tracks is done in a variety of ways: using the first recording as the basis for your tempo, feeding one of the many available rhythm tracks to your headphones or speakers to sync with, or having certain loops pre-recorded into the machine to layer up. A USB connection makes it easy to move files to/from the unit and send/receive MIDI. This makes it possible for you to sync with a computer for those with a bigger setup in mind; five-pin MIDI IO is also available for additional hardware configurations. You have 99 presets to store your work and song setups, which can be backed up via USB as well. 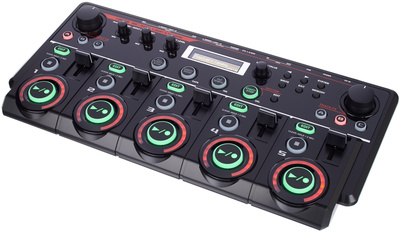 FX and Performance
There are various ways to hook up to the RC-505, including via a phantom power-capable XLR connection, an instrument input jack, or a 3.5mm stereo line input. We tested the mix inputs with a dynamic mic and a guitar plugged into the instrument jack. The RC-505 does come with onboard effects but no amp-modelled guitar processing, so guitarists will need to consider using an additional processor before the RC-505. Boss has thought about this though and added a second jack to cater for the stereo output of another pedal.

Two groups of effects are available – one for input processing as it’s captured live, and another Track FX group that processes the master output by default. These Track FX can be assigned to any number of individual tracks, so they are quite flexible.

Both effect groups offer the same 21 main FX options, with an additional four time-manipulation effects available in the Track FX. These are called Beat Repeat, Beat Shift, Beat Scatter and Vinyl Flick. All but the last have flavours of sound re-editing on-the-fly, with the last being a turntable stop effect. Shared FX include an octave pedal-like guitar-to-bass effect that has a range of up to two octaves and a synth effect that can transform your input’s pitch to a synth tone, which works surprisingly well and has a fairly quick response time. A vocoder lets you use your input signal as a modulator for a specified track and a variety of other extreme effects are also available. 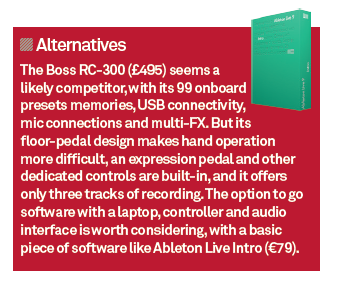 Loops in Action
Most of the RC-505’s controls feel intuitive and are immediate to play with. The FX dials are nice and chunky so you can get your body behind them as you perform, but there’s only one control available at a time. Specific FX settings can be saved within a phrase memory so it’s easy to recall them, it’s just a shame that there isn’t more control available by immediate touch.

Although this unit isn’t perfect, it does offer a higher level of performance options on the looping side of things by comparison to the competition. We’ve had a lot of fun playing with it and advise you to consider it if you want an all-in-one looping solution. 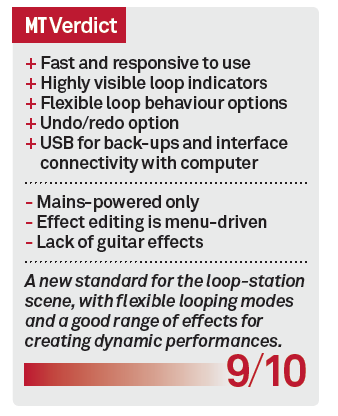