A classic piece of studio design is brought kicking and screaming into the 21st century. How has Black Lion Audio achieved this astonishing feat? 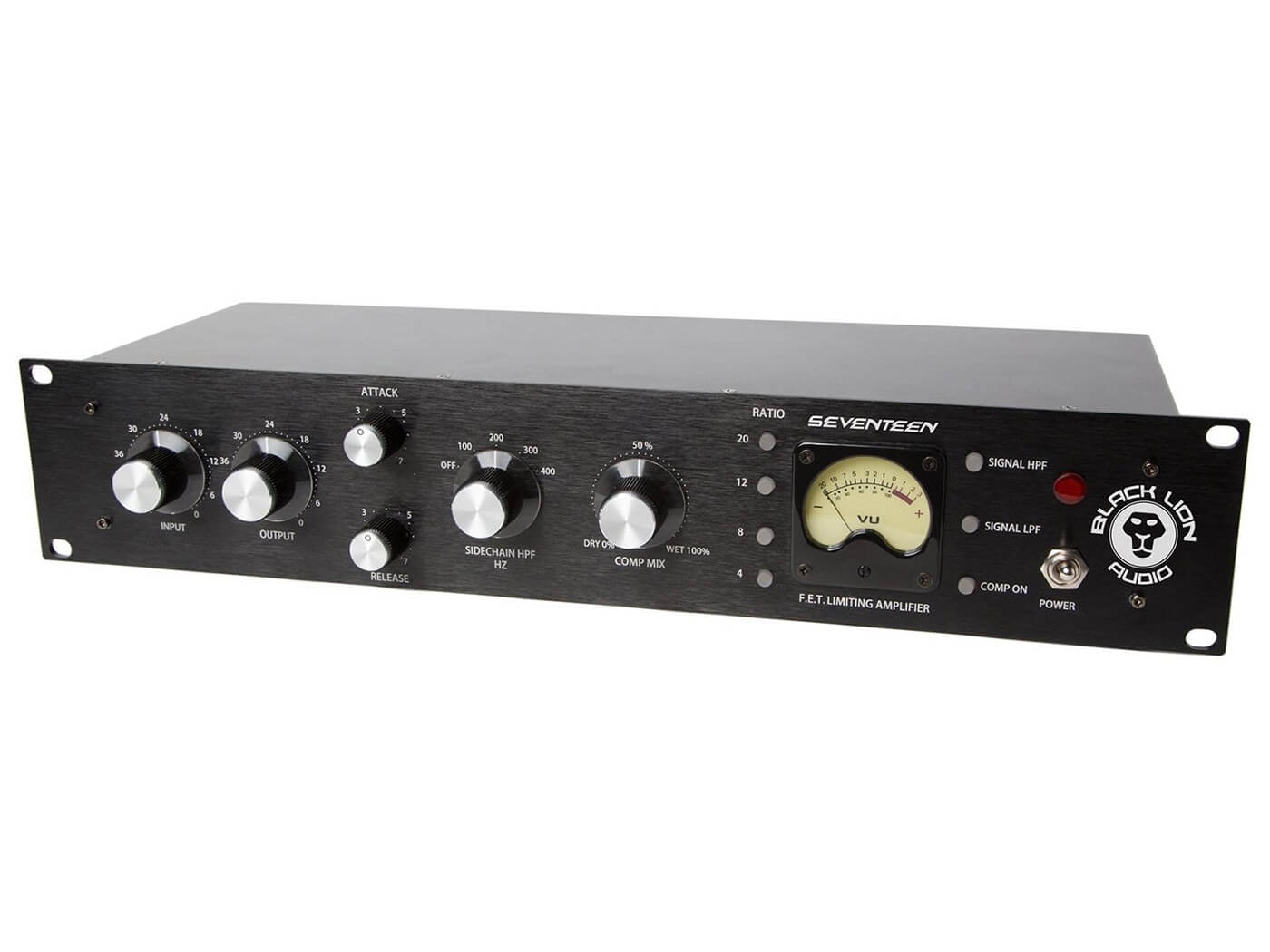 With so many new outboard units being copies (or ‘reimaginings’) of classic vintage hardware, I immediately know what I’m in for when I see any of the numbers ’73, ’47 or ’76 in the name of a new product. But when I was asked to test Black Lion Audio’s new Seventeen compressor, I didn’t put two and two together at first. As soon as I set eyes upon the unit though, I know immediately that I was dealing with something based upon the legendary UREI 1176 compressor/limiter. Now, I see what they’ve done; they’ve shaved off two numbers at either end and spelled out the remaining two as a word.

The Seventeen isn’t an all-out replication of the 1176, like Warm Audio’s WA76 for example, as it boasts several useful features not found on originals or clones. On its website, Black Lion Audio makes this clear with possibly the best opening gambit I’ve ever read about an audio product: “The Seventeen is not the ’76 compressor that your grandfather recorded with. It isn’t even a remake, but rather the Black Lion spin on what the ’76 should have been”. You’ve got to admire the chutzpah…

Before looking at the Seventeen’s unique features, let’s click some checkboxes regarding its ’76 status. A standard 2U 19-inch rackmount unit, the Seventeen is a single-channel (mono) FET compressor. It has front-panel controls for Input and Output, both of which are indented, offering 41 stepped levels of adjustment, along with separate 11-position stepped controls for attack and release. Attack response is adjustable from 20us to 800us (microseconds), fast enough to tame initial transients, while release times are available from 50ms to 800ms.

Four push-button controls select compression ratios of 4:1, 8:1, 12:1 and 20:1 (limiting), while any combination can also be selected including the classic ‘All Buttons In’ mode, beloved of engineers for over half a century.

Original 1176s, designed in 1966 and launched in ’67, featured a large rectangular VU meter. However, the Seventeen has a more stylised vintage vibe going on, with its kidney-shaped meter looking more reminiscent of 1950s designs such as Fairchild 660/70 limiters. It’s worth mentioning at this point that Black Lion Audio does produce a more authentic 1176 copy called Bluey, based upon a special blue-stripe model owned by Chris Lord-Alge, though this unit deviates from stock models by adding a wet/dry mix control. 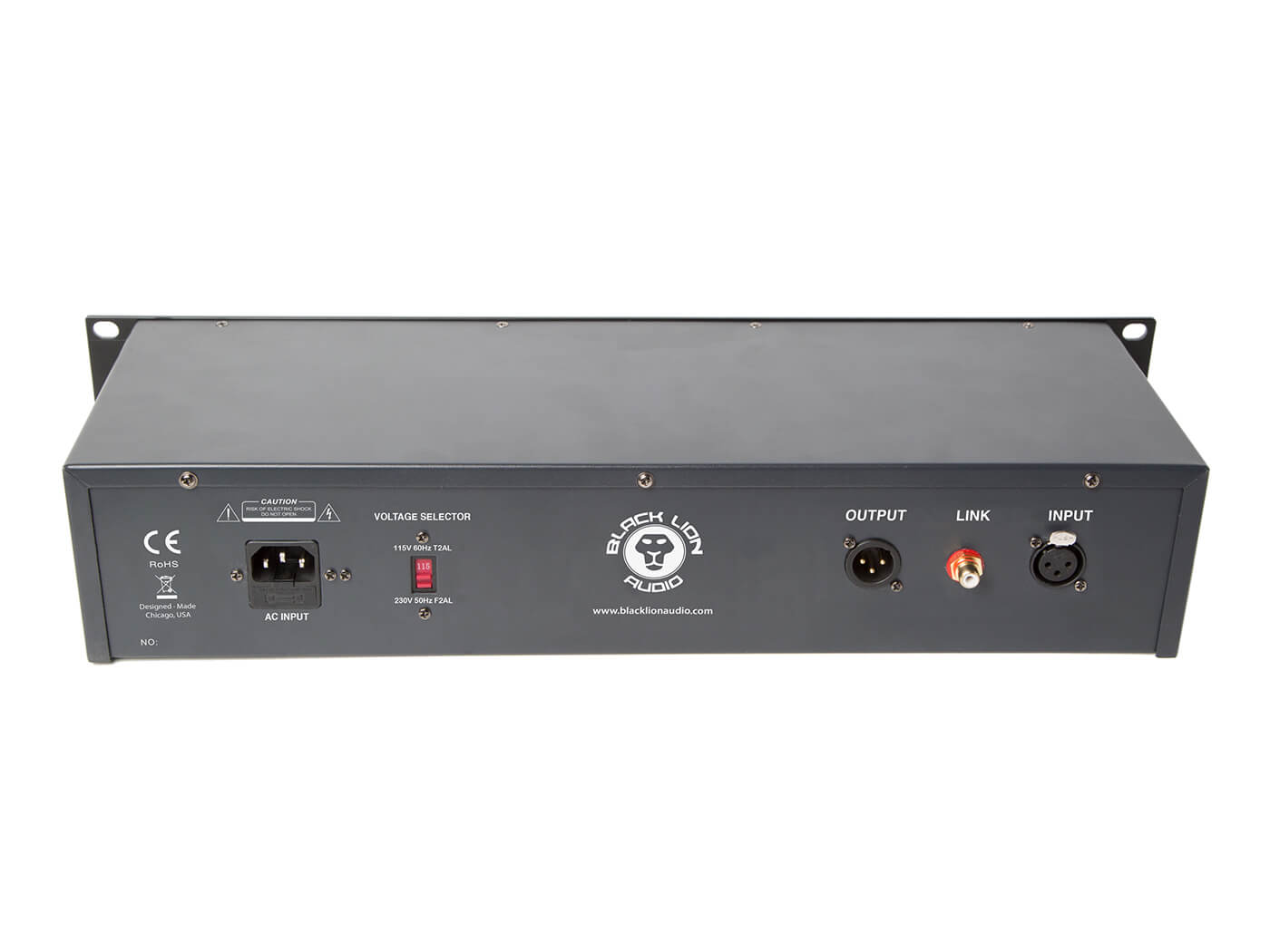 The Seventeen also features a wet/dry mix control, enabling New York-style parallel -compression techniques to be performed ‘in the box’ rather than having to route the compressed signal to another channel on your console (or within your DAW), as was traditionally done.

Unlike standard 1176 designs, the Seventeen features several handy filter controls. The first is a five-position sidechain high-pass filter offering HPF points at 100, 200, 300 and 400Hz or, of course, it can be switched out for a flat response. This useful control is often incorporated into the design of modern units and its inclusion is most welcome here, allowing mix busses and drum busses to be compressed without incurring unwanted pumping artifacts caused by bass frequencies.

On the unit’s rear panel are connectors for XLR input and output, IEC mains power and a voltage-selector switch. There is also a link connector, should you wish to link two units for stereo operation.

Record producer Tobias Lindell has co-designed this new 1176 variant. I reviewed Lindell’s 17XS compressor – another 1176-inspired design – several years ago, finding it to be an excellent dynamics controller; the Seventeen takes the souped-up classic approach a stage further.

Knowing the excellent results this type of FET compression can have on vocal tracks, I immediately strap the Seventeen across a previously recorded lead vocal, which had already received some subtle dynamics control courtesy of our Golden Age Project COMP-2A, a valve unit based upon the classic Teletronix LA-2A.

The 1176/LA-2A combination has been a popular compression chain for decades, though debates rage on as to the order in which the units should be linked. I’ve used both options with great results and it really is a matter for your ears. In this instance, the order was predetermined, so I begin by listening to the vocal track before the Seventeen is patched in. I then run the audio through the new unit without any added compression.

The vocal track sounds fuller and richer, with a hint of added presence. It’s no wonder many engineers will pass audio through an 1176 with no compression applied, just for the subtle enhancement the unit’s electronics impart on the signal. The high-quality Chicago transformers and Nichicon signal capacitors make themselves heard here; the Seventeen has bags of character with no interest in the notion of transparency. Adding a few dBs of compression at the lowest available ratio with medium-fast attack and release times evens out the vocal nicely.

FET compressors of this nature are capable of extreme compression effects, perfect for creating huge, thunderous drum sounds. Sending an unprocessed mono mix of drums through the Seventeen, I’m able to create a multitude of kit sounds, ranging from tight and punchy at moderate compression settings to explosive, surging and pumping effects using the All Buttons In mode, with fast response times.

Once I squash the kit sound as far as I can, I move to a bit of experimentation with both the wet/dry controls and the various filters to finely tailor the sound. The signal filters provide a quite subtle colouration, while clicking in the sidechain filter allows the low-end weight of the kick drum to pass through while simultaneously reducing the pumping effects. Best of all is the effect of blending the wet and dry signal, which creates an incredibly punchy sound that still retains some natural dynamics; this is parallel compression at its best. 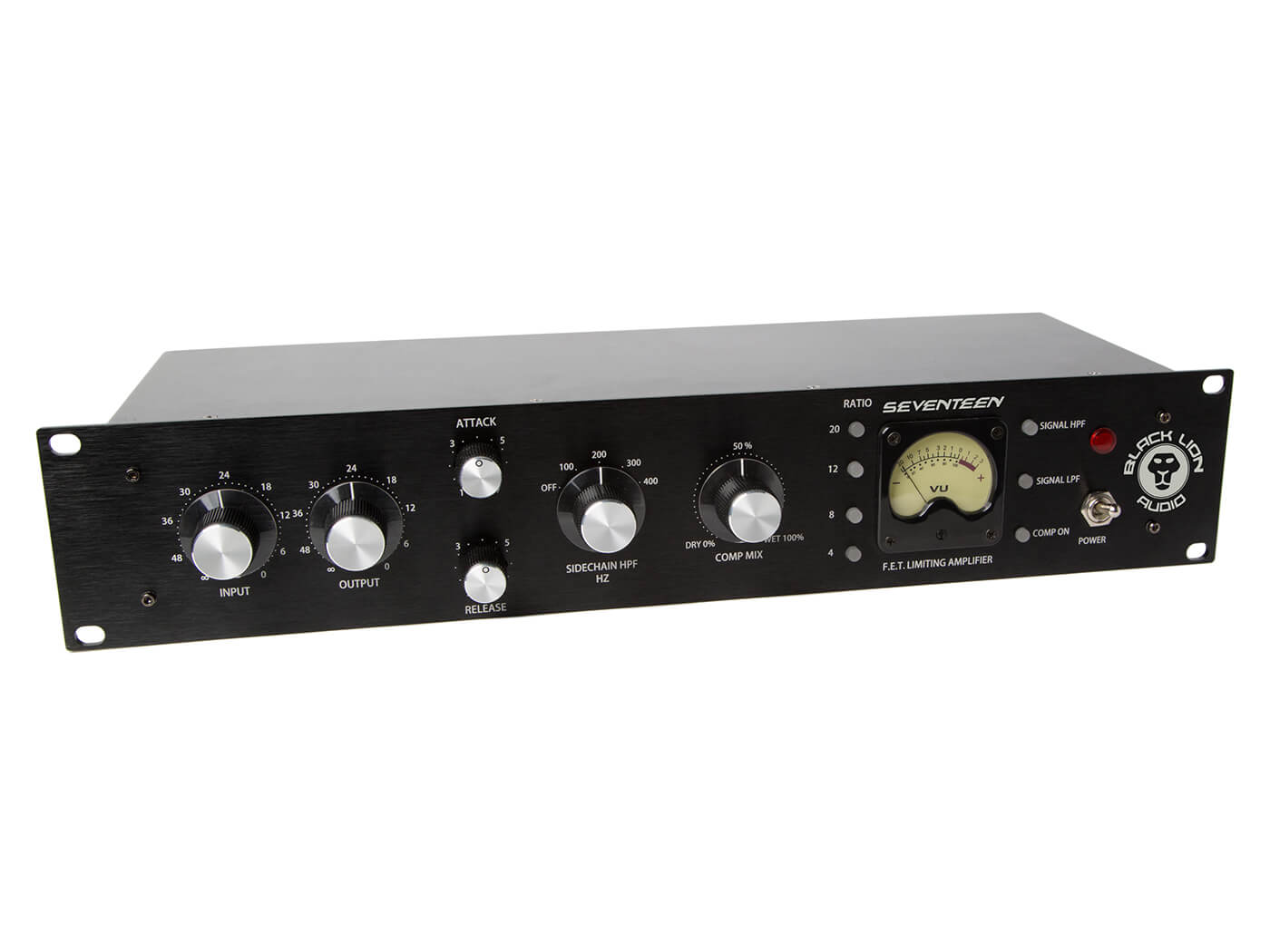 Unlike the aforementioned LA-2A (and its derivatives), which offers minimal user-adjustable controls and almost no obvious compression effects, 1176-style compressors offer the full gamut of compression styles. Now with several other useful features, the Seventeen can be used for everything from smooth leveling of vocals, to producing wild, explosive sounds. The Sidechain HPF is a most welcome addition, especially when limiting drum busses, and the wet/dry control is brilliant for allowing parallel compression techniques to be performed without all the hassle of signal splitting and creating new channels that need to be balanced.

This is hands-down the best 1176-style compressor I’ve used to date. Purists may scoff at features not part of the original UREI design, but this is a turbo-charged version for the 21st century – I’m willing to bet that even your grandfather would appreciate that.

Most genres of popular music rely on dynamics control. Upon its original release in 1967, the 1176 was hailed as the most versatile of solid-state compressor/limiters. Whether its unobtrusive levelling of vocals, bass and other instruments, or dramatically altering the dynamic character of audio, the 1176 has been the go-to compressor for many engineers for decades. Black Lion Audio’s Seventeen retains all the features of the original design and adds a range of filters to further tailor the compression style and sound.

Famed for the smashed sound of the All Buttons In mode, particularly good for creating explosive drum tracks, many engineers would set up an extra channel (or two for stereo) for the smashed 1176 signal and blend it with the unprocessed drum mix. The Seventeen’s wet/dry mix control allows this legendary New York-style compression to be performed within the unit. Any one looking for a fully featured single-channel compressor to create almost any type of dynamics control from subtle to severe should put the Seventeen right at the top of their audition list. 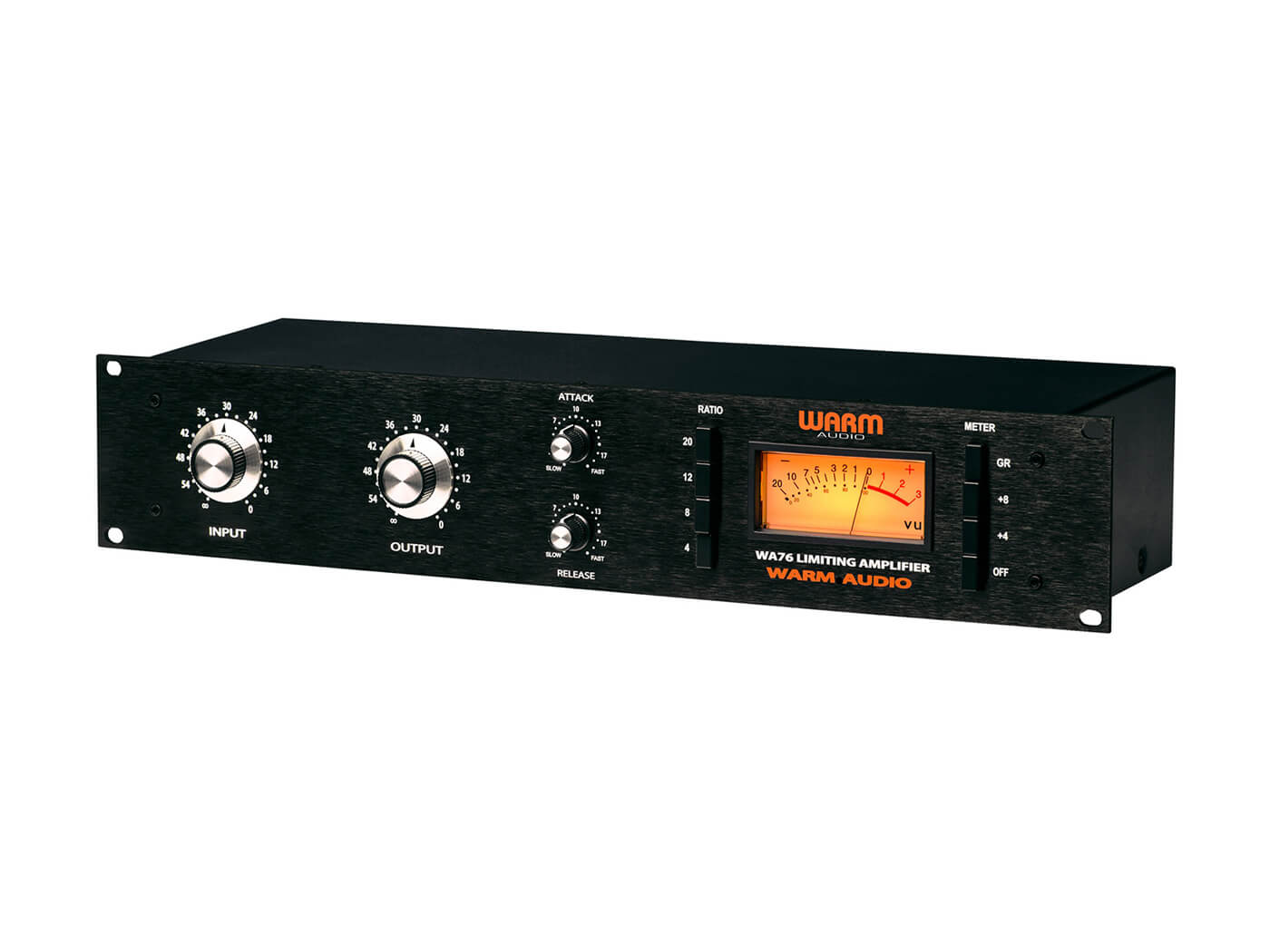 Warm Audio’s WA76 is based heavily on the original 1176 design, featuring a fully discrete signal path. It doesn’t have the filters or wet/dry mix control of the Seventeen, but retains the classic look and sound of original 1176 models. 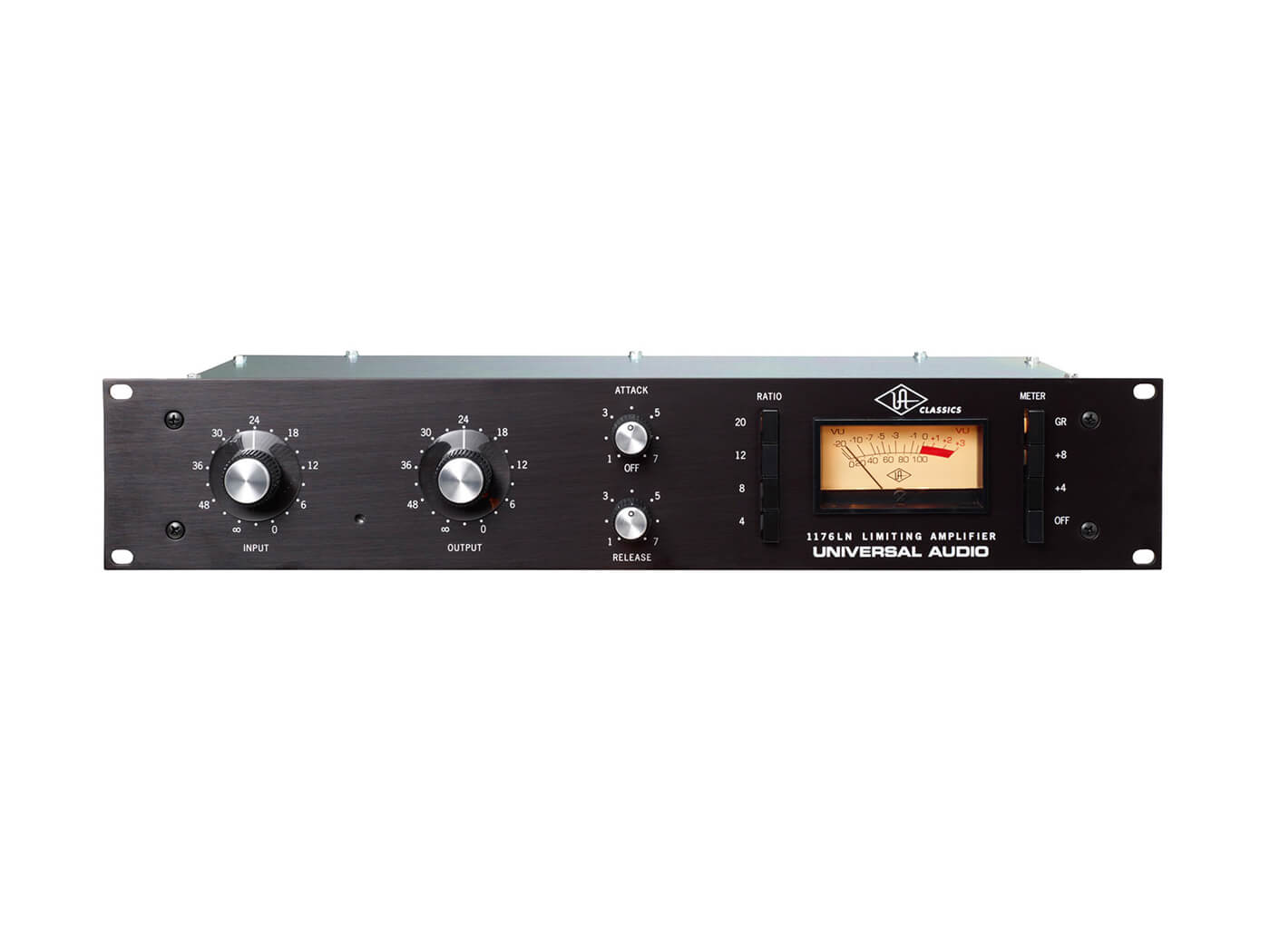 For those who demand the genuine article without searching for a vintage 1960s/70s example, Universal Audio’s 1176 is the official authentic version. It’s based upon the legendary D and E revisions, widely acknowledged as the best of the original models.