The DAW marketplace is crowded, so can the new Bitwig Studio 1.2 update help it to stand out from the crowd? Hollin Jones investigates… Details Price  €259 Contact Via website Web www.bitwig.com System Requirements Mac OS X 10.7 or later, Windows 7 or later Ubuntu 12.04 or later64-bit CPU, 2GB RAM There must be something […] 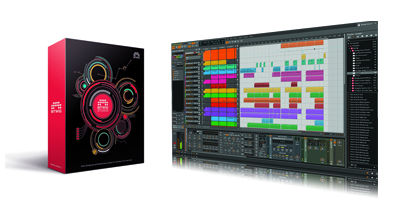 The DAW marketplace is crowded, so can the new Bitwig Studio 1.2 update help it to stand out from the crowd? Hollin Jones investigates… 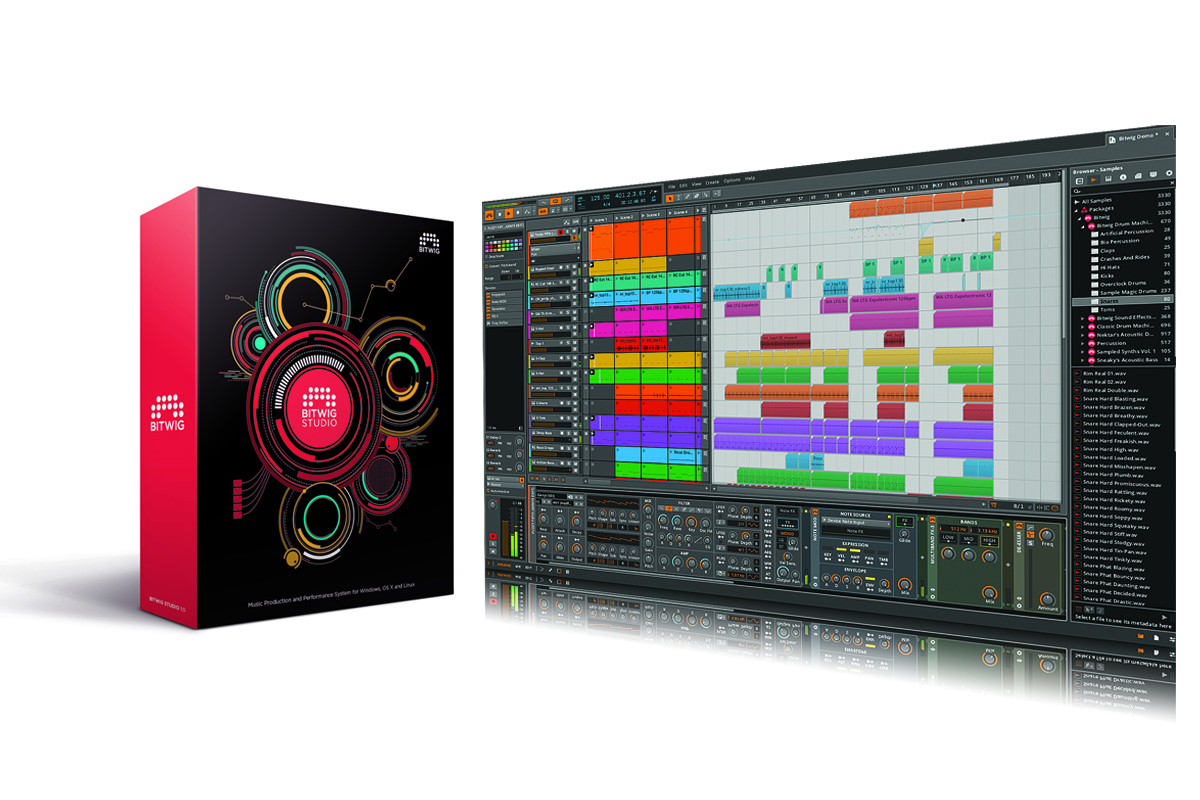 There must be something in the water in Germany that makes people develop music software, because the country has more than its fair share of companies producing hi-tech music gear. Berlin-based Bitwig is one of the younger ones, a small but growing team that has sought to put its own stamp on the DAW landscape.

Building a music production environment from scratch is no mean feat, but the 1.2 update adds some important new functionality and can be seen as a step on a much longer road stretching into the future.

If you’re not familiar with Bitwig Studio, it’s a tri-platform DAW running on Mac, PC and – somewhat surprisingly – Linux, which is usually ignored by major music app makers. You may also notice a certain visual similarity to Ableton Live, and it’s certainly arguable that elements of Live have influenced the look of Bitwig.

This goes on a lot, of course, across the tech industry, with developers constantly being ‘inspired’ by other apps to improve their own. So, if you’re familiar with Live the workflow won’t be a big shock to the system, even if some of the things on offer are actually done rather differently.

Getting Started
After downloading the core application, you can authorise it online and also lock it to a specific computer if you prefer, which is handy for using it when no network is available. There’s a decent amount of content supplied, mostly in the form of sample-based instruments created by some leading third-party artists and designers.

You can download some or all of this on installation, or go back later and download just the bits you need using the Package Manager. The interface is slick and minimal and wants you to work mostly in a single window, which is becoming increasingly common.

Projects can be tabbed and the audio engine switched on or off for each one, and the different sections have moveable boundaries so you can tweak the layout. 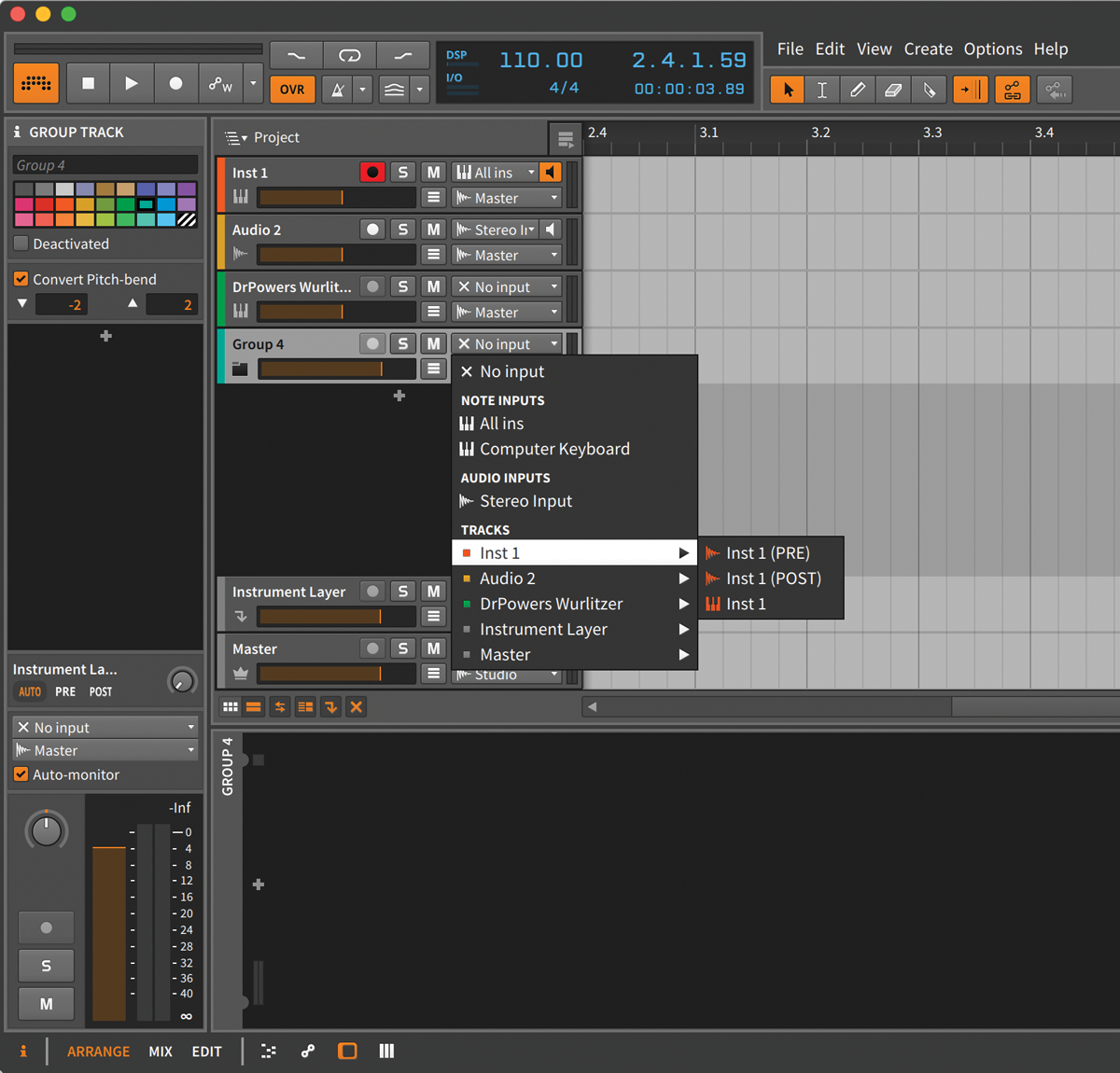 Presets for multiple monitors are available, and although there’s no user window preset creation function available, the self-contained windowing nature of the application makes this less of a problem.

Workflow is often a matter of personal preference, but I actually really like Bitwig’s design. It’s helped by the fact that it doesn’t do as much as Cubase Pro or Logic Pro – at least not yet – and so it has less stuff to shoehorn in. Nevertheless, the learning curve is quite gentle, and that’s thanks at least in part to a clean and clear layout.

To an extent, this follows conventions, with track inspectors to the left, the timeline in the centre, browser on the right and a switchable editor section at the base that can display a piano roll, automation, instrument and effect chains and a mixer. The Mix and Edit sections can be expanded to use more screen space, and there’s a very Live-like clip and scene launcher as well.

What’s New?
The 1.2 update brings some new features that will help with your everyday music making. Some of them are features you’ll recognise from other apps, and others put Bitwig slightly ahead of the curve. Given that the update is free for existing users, all the new stuff will, of course, be welcomed. First up, and perhaps a little overdue, are Group Tracks.

A necessity for larger projects, these let you route batches of tracks to a single group track for single-fader control. Ideal for drums, choirs, percussion and the like, you’ll probably start using these immediately. Next, and a little more interesting, is the new pop-up browser. All devices in Bitwig now have an Audition icon, and clicking on this reveals an extensive pop-up browser with all your presets and file locations.

Featuring a column view, this is searchable using tags and lets you hot swap patches and sounds regardless of device or file type. So if you’ve programmed a part but decide to swap the sound, you can do it easily. It works well but can occupy screen space – you might want to minimise it with the built-in fold function.

Filtering by keywords or setting up lists of favourites can cut down considerably on the amount of navigation you have to do. Bitwig comes with a good selection of its own instruments and effects, and another new feature is that dynamic devices now have a visual display that shows the sound being processed through them in real time.

As well as looking quite cool, this is handy for seeing – for example – how compression or limiting is affecting the signal. Some higher-end competitors have these kinds of displays in their mixer channels, though not many. Another feature that’s not yet made it to every DAW on the market is high-resolution display support, which Bitwig has on both Mac and Windows. With many computers now having Retina or high-DPI screens, this is very welcome. 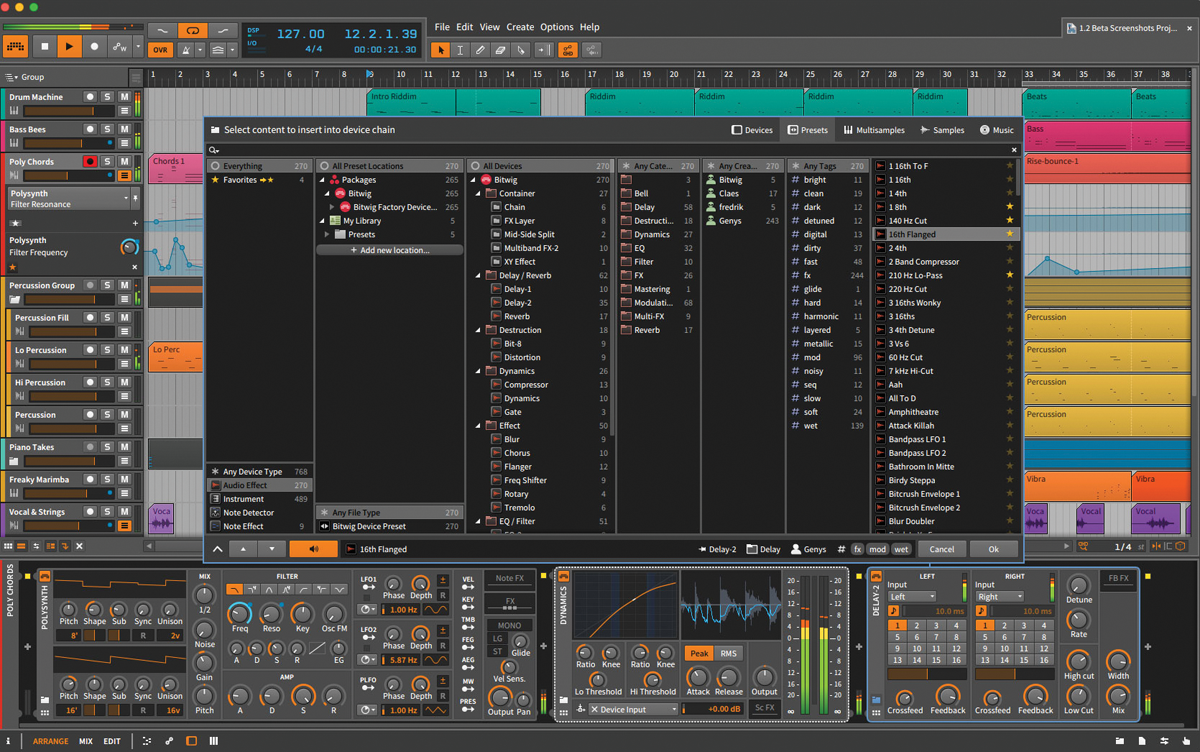 In Use Tip
Bitwig 1.2 now supports group tracks that allow you to route multiple tracks from inside a project to a single channel for better control – great for drums, percussion and other instruments that have multiple elements to them. This includes Meta Clips – miniature blocks of the combined data that are easy to move and edit within the Arrange view

Alternatives
Ableton Live comes in three editions, with the Standard (€349) relatively close to Bitwig in terms of what you get, though the price is higher. Cubase Artist 8 costs £220 and is very well-established, as well as coming with some great content and features, such as chord pads, score editing and more. Even more introductory versions of both are available if your needs are very modest.

Best of the Rest
It’s now possible to save project templates – a great time saver that many people take for granted. You can now also save MIDI controller mappings on a per-project basis. The mapping system is clean and easy to understand, with overlays showing what can be assigned – and the new mapping panel really helps. Also good for workflow is support for customisable shortcuts.

Again, a staple of longer-established DAWs, this is still a great addition that enables you to create keyboard-based shortcuts to trigger all manner of functions. Managed via a special window, you can edit shortcuts both for the keyboard and for controllers.

Bitwig is also one of the first DAWs to support the emerging Expressive MIDI protocol, enabling control of things such as tremolo or vibrato with more unusual control devices, such as those triggered using hand movements. There is a range of smaller changes too, including Jack support, pressure note expression, a new device inspector and Delay 4 module and support for LinnStrument and Roli Seabord devices.

Add to this existing things such as plug-in sandboxing, per-note expression, an open controller API and a unified modulation system and there’s quite a lot going on under the surface that makes Bitwig more capable than first meets the eye.

Taking the Plunge
Grabbing the update is a no-brainer for existing users, since it’s free and adds some cool new stuff, plus some good workflow enhancements. If you’re a new user, Bitwig has much to recommend it.

It’s slick and friendly with a very gentle learning curve. While it does borrow some ideas from elsewhere, it does so in a way that works well, and certainly has a few tricks of its own that mean it’s much more than just bits of other things. Performance is very good and everything feels nicely tied together.

There are some omissions, due most likely to the youth of the software and the size of the development team. Audio Units are not supported on the Mac, which is quite a big thing, and OSC and ReWire aren’t supported on any platform. On the other hand, VST is supported in 32- and 64-bit formats, and if you’re a Linux user this is likely to be far and away the most comprehensive DAW available to you. There’s no scoring, video or surround support, though some or all of these may be added in future.

Ultimately, this is a great DAW that has a little catching up to do in some areas, and is ahead of the curve in others. A demo version is available to help decide which of its features are most important to you. 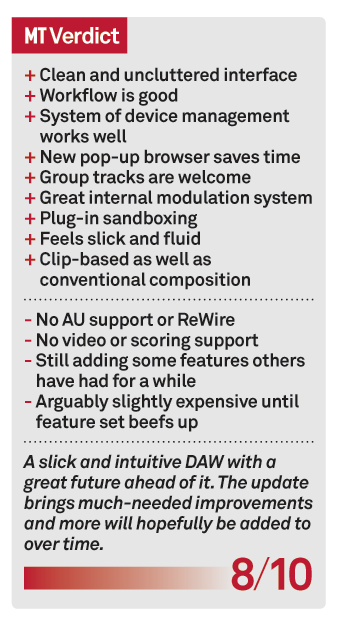