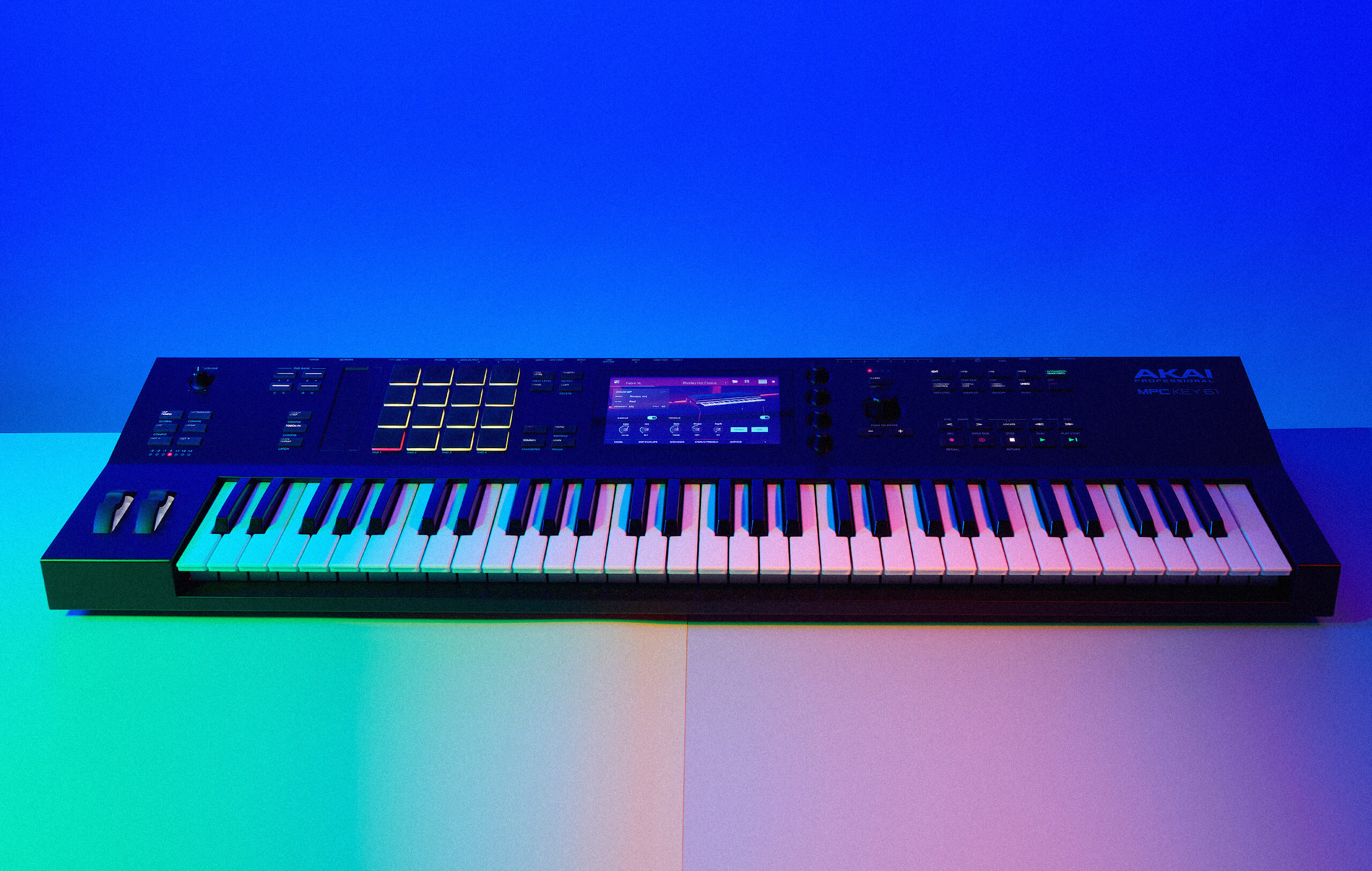 The Big Review: Akai’s MPC Key 61 isn’t perfect but it is inspiring

Akai moves into workstation territory with intent via an irresistibly cool MPC, even if it isn’t a must-have

For more than three decades, US-based Akai Professional has been underpinned by the legacy of its iconic MPC samplers. The brand has revised the MPC model since 1988 with new instruments, MIDI controllers, and software, much to the delight of its fans. But Akai hasn’t always immediately impressed its followers. The MPC Live II, launched in 2020, initially divided producers with its built-in speakers, and the MPC One has been scrutinised, too.

With the launch of the MPC Key 61, Akai’s first foray into workstation keyboards, the brand already has creators stroking their chins about whether this powerhouse is worth its £1,700 asking price. Granted, this instrument isn’t exactly essential to anyone’s setup – but it might tempt you with its expansive sound library, tactile workflow and deep featureset.

The MPC Key 61 is a genuine premium product. With a solid plastic casing and sturdy buttons and knobs, everything about it feels built to last and is a joy to tinker with. Everything is backlit, too, making for easy navigation in dimly lit environments, and the central seven-inch screen is clear and vibrant – just as Akai promises. When we fire up the sleek MPC Key, we feel like we’re about to use a next-gen hardware instrument.

The 61 keys are semi-weighted and fun to play, though experienced keyboardists will lament the lack of fully weighted keys. Players used to the keys of a synthesizer, however, should feel right at home, especially given the built-in aftertouch that makes expressive performances. You can trigger aftertouch modulation with a single key – if you’re playing a pad with a big chord, for example, you can deploy vibrato for the whole patch with only the lowest note. The onboard arpeggiator can tackle various timing and pattern modes, and there’s a swing slider, a staple of the MPC series.

The robust pitch and mod wheels to the left of the keyboard are satisfying and responsive and, for further effects and modulation, there’s a multi-faceted touch strip on the left of the top panel. Long-press the Touch FX and Touch Strip buttons to change the functions and effects of the strip and activate filters, phasers, creative octave effects and more. There’s also a Note Repeat button primed for hi-hat and snare rolls, quickly configurable via the strip.

The 16 RGB-backlit velocity-sensitive pads aren’t full-size, as on the MPC Live II, but are similar to those on the MPC One. The 16 Levels and Full Level options are here too, and you have eight Pad Banks at your disposal. The pads aren’t just for finger drumming either – you can use them to deploy chords of your virtual instruments, mute tracks, simply playing notes and more.

The MPC Key’s layout is pretty sensible and, crucially, many of the buttons have multiple functions accessed via the shift or a long-press. The large knob on the right is what you’ll be using the most, as it lets you scroll presets, programs, sequences, the piano roll, and more.

The four Q-Link dials beside the screen have four functions, each with the Q-Link button switching between pages. But you might wish you had double that – as on the Akai Force – to better control all the macro parameters of presets on virtual instruments. It’s not immediately obvious how to remap the dials to your liking either.

Akai’s new workstation boasts a remarkable 25 instrument plug-ins, 6,000 presets and 100 effects, plus six new Akai virtual instruments. The worst part? You can only load eight virtual instruments and eight audio tracks per project. But you can, of course, have up to 128 total tracks of drum kits, loops and sampled instruments.

Fabric Collection is the frontrunner of the six new plug-ins, and Fabric XL is its spotlight synth, with Fabric Piano, Fabric Electric Piano and Fabric – a lightweight version of Fabric XL – rounding out the bundle. Fabric XL is a deep dual-layered sample-based synthesizer with immense versatility. A quick scroll through its presets demonstrates the range of timbres you can create with it, while a tap of the Edit Instrument button – either on the touch screen or the dedicated button on the top panel – opens up the entire engine for further tweaking. The Edit Instrument option is available for all virtual instruments too.

The latter is the weakest of the four. It hardly competes with the stunning, articulate libraries of Spitfire Audio and Orchestral Tools but it boasts some useful sounds for padding out songs nonetheless. The other three keys-based instruments, however, are gorgeous, with brilliantly designed presets and detailed GUIs. Switching presets on Stage EP, for example, changes the colour of a neon light on the screen a nice touch.

Elsewhere, AIR OPx4 takes on FM duties and has a satisfyingly modern engine while being able to conjure retro synth patches. It also has an additional sample layer for injecting further character from tape hisses, vinyl crackles and similar ambient sounds.

Akai’s built-in drum sounds are also superb. They cover plenty of ground, from acoustic kits to 909s and 808s, and are automatically mapped to the 16 drum pads on the top panel. Plus, as Akai continues to roll out Expansion sound packs, you’ll be able to expand your kit selection too.

If you’re taking the MPC Key to the stage, you’ll be pleased to learn of Key Ranges. This lets you divide desired tracks across the keyboard to simultaneously play multiple sounds at once. You might want violins at the high end, for example, and a growling Fabric XL patch at the other, with a sample spread across the middle section. This is a breeze to set up and you can arm multiple tracks to record your performance with the various instruments.

MPC Key’s display is your comprehensive command control. It’s a shame that Akai decided to stick with a seven-inch screen here as on the MPC Live II and MPC One – given that the whole panel is much wider, a few inches of extra real estate for the display would make a massive difference. Still, it’s workable and pleasantly responsive but, besides zooming out in the piano roll, it isn’t capable of as many multi-gesture actions as the average smartphone these days.

MPC OS 2.11, the software that MPC Key runs, is incredibly sophisticated. It’s a starkly different workflow to that of major DAWs such as Ableton Live and Apple Logic Pro. Instead it’s based on the foundations of early MPC systems, such as the MPC 2000XL, produced in 1999. Sure, it’s a far cry from the early days but you’ll still be faced with the usual terminology: sequences, programs, projects, etc. If you’re not yet familiar with the OS but are thinking about picking up this workstation, we recommend downloading the free MPC Beats software and getting to grips with the principles first.

If you’ve got other instruments and controllers set up in your space, you’ll have little trouble hooking them up to the MPC Key. Eight CV/gate outputs are housed on the rear for modular instruments, along with MIDI-in, MIDI-thru and MIDI-out connectors for vintage synths. You can also hook up USB-equipped MIDI controllers and other hardware to bolster the workstation’s tactility – the MPC Key can support a whopping 32 MIDI devices.

An excellent addition to the MPC Key is the potential for routing 32 audio inputs and outputs via an external audio interface, ideal if you plan to make it the centrepiece of your studio. You can also use wifi and Bluetooth to establish wireless connections to Ableton Link and MPC OS updates too.

The MPC Key’s 32GB of storage may not fully serve your project-making needs but you can expand it with an SSD drive in the SATA bay. Unfortunately, you’re stuck with the 4GB RAM, which feels stingy but is at least backed up by a competent quad-core ARM processor.

Akai’s sampling expertise is revered in the beatmaker community, and it’s not left any capability out in the MPC Key. You can sample directly in via the two combi inputs on the rear, with a switch to toggle between instrument and line, and a +48v switch for condenser mics. This means you can record anything into MPC Key, from live vocals to your connected modular rig and sounds from a field recorder.

The lovely thing about having the keyboard is that you can slice your sample across 61 keys. This is awesome for long-form samples and arrangements, opening up serious creative potential when performing a whole track live or manipulating an extended passage of music.

You don’t need the MPC Key 61. It’ll never be easy to part with £1,700, and there’s an abundance of high-quality free and inexpensive plug-ins online that easily compete with those on this workstation so long as you have a laptop and DAW to run them. Your laptop probably has more than the Akai’s 4GB of RAM too. Affordable 61-key MIDI controllers aren’t tough to come by either, nor are controllers with ample knobs and faders. Want to sample records into the free MPC Beats software? A capable audio interface will set you back less than £90. Itching to play beats on a 4×4 drum grid? Pick up Akai’s MPD218 for £70.

Make no mistake, though, the MPC Key 61 is a proper studio and stage centrepiece, and should be serious competition for Roland’s Fantom and Korg’s Kronos. Its sample editing and sound-design tools are powerful, and the generous connectivity options allow you to perform with a cockpit of instruments. The plug-ins, keyboard, touch strip and 4×4 drum grid let you lay down loops in minutes, and the continued support Akai will provide should ensure that it remains viable for years to come.

Akai can’t please everyone with the MPC Key – some creators will scream for a larger screen, more potentiometer controls, more keys, more everything. But should you find yourself in front of one, you won’t fail to be inspired by what’s on board.

Find out more at akaipro.com.