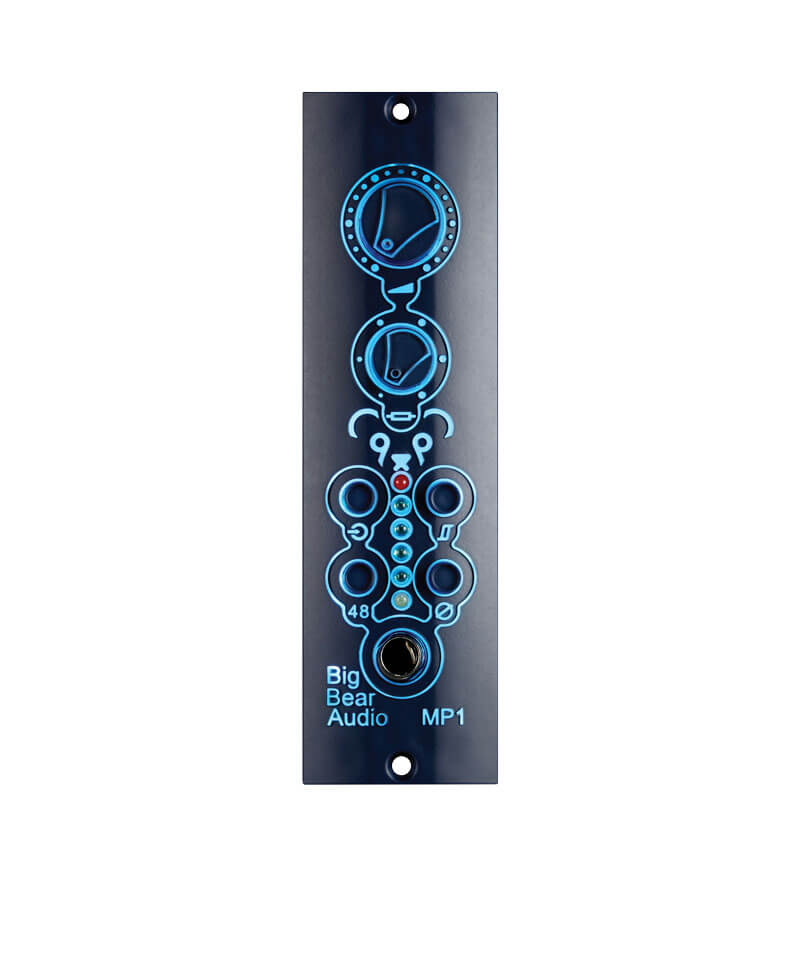 The embrace of DIY|RE’s Colour format has been a joy to watch. We have followed the development from Peterson Goodwyn’s first blog post, through to reviewing a pair of the first Colour Palette hardware units back in 2014 – units that remain in our 500-series rack today and in regular use.

Since then we’ve watched as the idea for simple, inexpensive hardware “plug-ins” has thrived and been taken on by numerous other companies, offering a huge selection of different “Colours” for the Palette, in addition to a selection of alternatives to the Colour Palette itself, both for 500-series and Eurorack. Big Bear Audio, headed up by Charlie Slee, Chair of the Audio Engineering Society British Section, is the latest audio hardware company enamoured by the open-source concept, fitting a Colour module slot onto both of the company’s debut products, the MP1 and MP1+ preamps.

Colour between the lines

At first glance the MP1 and MP1+ are remarkably similar. The front panels are identical, both have a distinctive blue back-lit design, featuring input and output controls, 1/4-inch instrument input and switches for input select (front or rear), Colour bypass, 48V Phantom Power and Polarity invert. The front panel sticks out a little from the rest of the modules in our rack and the lighting and Big Bear logo is sure to get some interest from artists passing through the control room.

Behind the front plate both units feature a remarkably clean, discrete Class A mic/line amplifier. The primary difference lies in the output. The MP1 uses Burr Brown ICs for an electronically balanced output, where the MP1+ houses a Lundahl LL1517 output transformer, for handling the output balancing. In addition to this the MP1+ also features an ELMA stepped attenuator for the input gain, providing additional control and recall.

With the Colour module disengaged both units are very, very clean. The principle being that any flavour should be brought in by the use of Colour modules, rather than being baked into the preamp itself.

Despite this, the MP1+ did have slightly more heft to it, the Lundahl transformer providing just a touch of colouration to the signal, resulting in a more pleasant recording when coupled with the Aston Origin on our voice and acoustic guitar. If you are looking for a clean, linear, nothing-but-gain preamp, the MP1 has to make your shortlist.

However, using it like this seems to be missing the point. The pleasure with a preamp of this kind comes entirely once you engage the Colour switch and how much fun you have with this will depend entirely on what modules you have available.

We have built up a small collection of modules for our Colour Palette now, and began testing by fitting the MP1 with the DIY|RE CTX module in each. This is a transformer module making use of a Cinemag transformer. With this module in place the MP1 should be a little closer to the MP1+ with no modules engaged.

The two transformers are not alike, however, and their placement in the circuit is slightly different too, so we weren’t expecting this $60 module to fully replicate the MP1+. The results stood this out. The CTX is a subtle module, but it helped to sit our vocal a little further forward, with a little more definition in the bottom end than the clean signal. 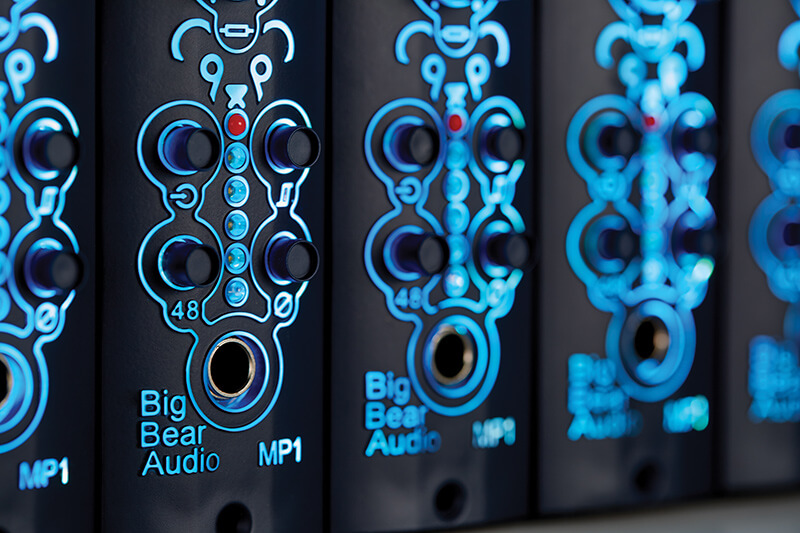 Comparing it to the MP1+ is tough. Both add more weight to the signal, and help to shape the tone, but the Lundahl transformer is more open than the Cinemag, giving the signal weight without compromising the top-end in the way the CTX module does. Even just comparing the two transformers it’s easy to see why the Colour modules offer so much exploration. On vocals, the plain MP1+ was still our preference, but the MP1 with the CTX won out on electric guitars and DI’d bass, where the slightly more closed-off top-end was advantageous, rather than a problem.

With the clean MP1+ our preference so far for our vocal, we tried pairing this with several of our other modules, hoping to find a flavour which best compliments the MP1+. The DIY|RE 15IPS worked well, giving the impression that you are recording straight to tape, with a little head bump, high-end roll-off and some dynamic limiting and saturation from the diode clipping, our favourite pairing came from the Eisen Audio TB79 module.

Like the 15IPS, the TM79 is meant to emulate a tape machine, and makes use of multiple saturation stages, including two transformers apparently voiced to emulate a 3M M79 tape machine – as used in The Rolling Stones’ Mobile Studio. This voicing has a similar low-end head bump to the 15IPS, but a smoother saturation with a soft mid-range, which works well to bring clarity to our vocal performance without any use of EQ.

While the MP1 paired with the CTX offered a great DI tone for both bass and guitar, our favourite pairing on DI’d bass came from the MP1+ with the CMOS Steezer module from TB Audio. The CMOS Steezer is essentially a fuzz pedal (in the vein of the Electro-Harmonix Hot Tubes) in a module with the fuzz settings toned down to a more considerate 4% THD (at +4dBu), and adds a strong mid-range push to the signal, which responds dynamically to the incoming bass guitar signal. We also had great results using the DIY|RE JFT module on both guitars and bass. 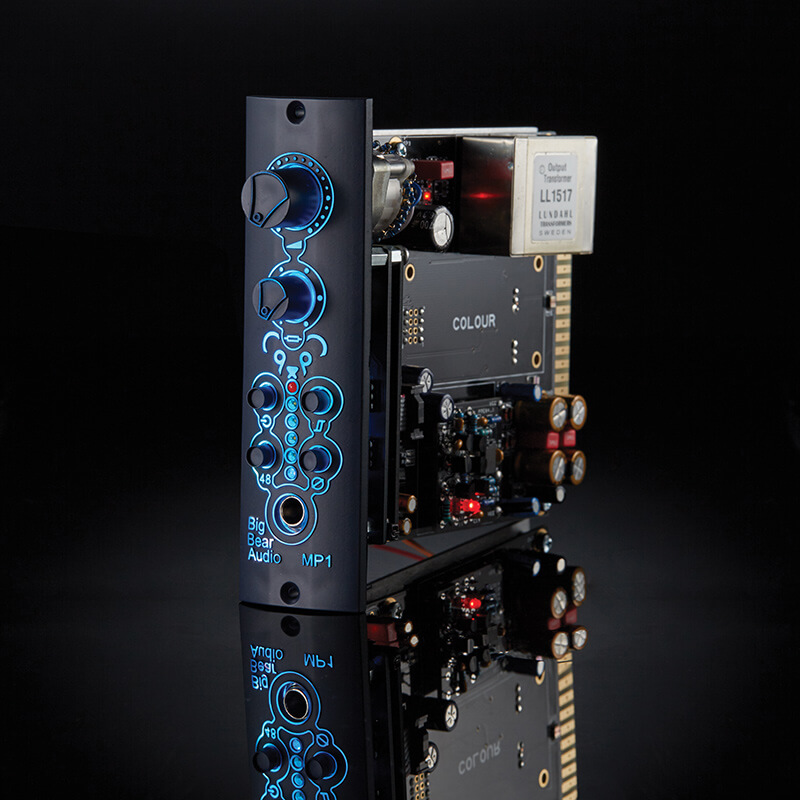 If you already have a huge selection of outboard preamps, offering you all the available flavours that you could possibly want, then the MP1 probably isn’t for you. But if you’re looking for one or two preamps that you can use regularly for a variety of different sounds then this is an ideal, flexible choice.

The real beauty of a system such as the MP1 and MP1+ is the ability for the preamps to sound exactly how you need them to sound. Instead of having to own several different preamps for each flavour, you can simply get a module with the flavour you require and pop it into the MP1. Need a Neve flavour for your next vocal? Try the Louder Than Liftoff Royal Blue module. Or an API flavour for your kick? Try Louder Than Liftoff’s Mass Drivr or DIY|RE’s DOA module. Want to smash some room mics? Try the Avenson Audio MN-50 or Tonecraft Toneloc. There are so many options to choose from now, the Colour format really does offer something for every occasion. 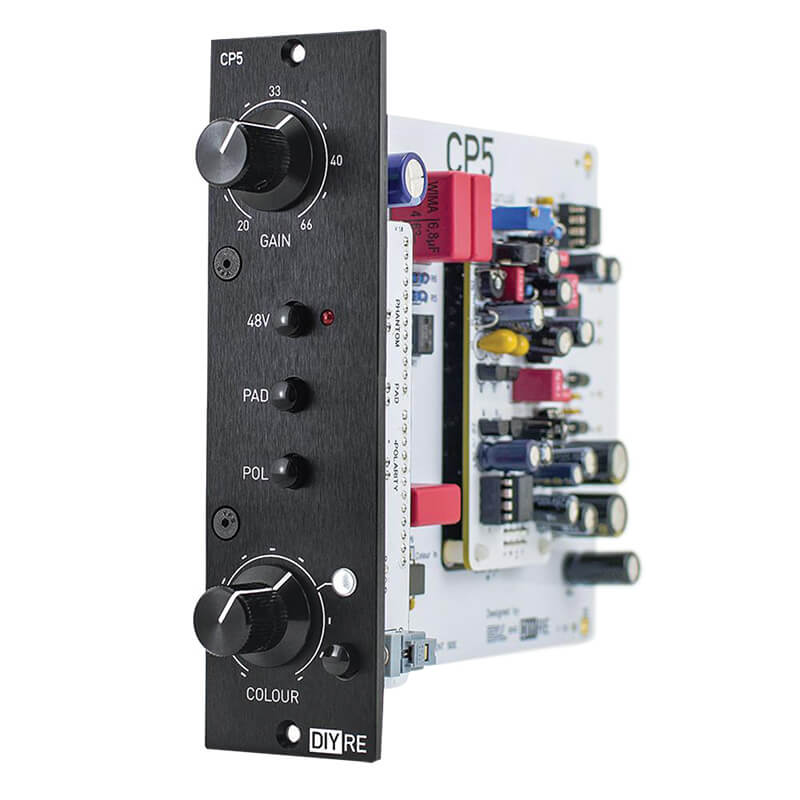 From the designer that started it all, the CP5 is a single slot 500-series preamp with a single Colour slot, much like the MP1. However, it doesn’t have a front-panel DI, and it uses ICs for amplification rather than an discrete preamp design in the MP1.

HRK managed to squeeze a second Colour slot onto the single 500-series frame for the MP568C preamp, as well as a front-panel DI input and individual colour switches. However, there is no pad for loud sources.