When it comes to plug-in fame, Aether is quite a celebrity, often quoted as a personal favourite by industry professionals doing stereo and film music work. The depth and size of Aether and its more CPU-conscious partner, Breeze, are their main attractions. Manufacturer: 2C Audio Price: $250 Contact: via Website Web: www.2caudio.com Amazon.co.uk Widgets Actually, […] 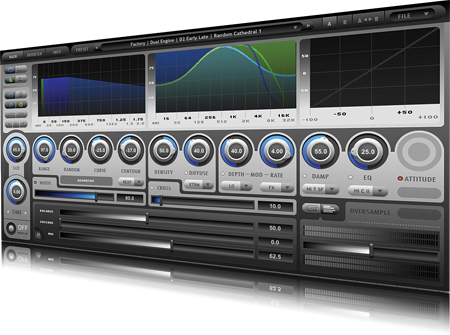 When it comes to plug-in fame, Aether is quite a celebrity, often quoted as a personal favourite by industry professionals doing stereo and film music work. The depth and size of Aether and its more CPU-conscious partner, Breeze, are their main attractions.

Actually, so is the price when you hear how good they sound, and newcomer B2 can deliver this level of audio quality for ambience as well, albeit in its own way. However, ambience is just the beginning of the story, as distortion, dynamics processing and mild to extreme modulation processing are also included, enabling B2 to go as far into sound design as you want to.

B2 is based around two reverb engines, which can run in  parallel or in series or a definable blend between the two using the Cascade slider. Both engines can be separated from stereo functions for quad surround work but we didn’t have the necessary kit to test this during review so we’re focusing on its use for stereo work.

B2 is an algorithmic device, so there are no IR files to be found here. It’s simple to understand, displaying the usual expected controls for reverb and a few others that allow for more in-depth shaping. The visual feedback of the reverb is interesting as you can see both engines’ output shapes super-imposed over each other. Their blend is also reflected visually, which changes as you move the mix slider from side to side. The output result of Cascade settings can also be seen in white, but you can switch the view to show just one engine if you need greater visual clarity.

Each engine includes a surprisingly good distortion section with a huge range of harmonic distortion types. They all sound warm and rounded, even at the more extreme settings. No harsh digital tones here! There’s also a saturation-based limiter at the master stage which has various presets too, offering many ways of getting a sonically rich signal while avoiding output peaks, which can in turn destroy a mix. The distortion processing alone offers a big chunk of value to this plug-in, even with reverb disabled.

Another interesting aspect of B2 is its dynamics module. This can be set to various modes for ducking, gating and compression of your signal, allowing you to create the common effect of ducking a reverb when the dry signal is present to keep things clear. But like other aspects of B2, there are plenty of other options depending on how under-the-hood you want to get. Dynamic crossfading can be set up for instance, so a sound can trigger two different spaces and anywhere between based on their levels.

The distortion, some very exotic contour shapes and dynamic processing all contribute to B2’s ability to react in a non-linear way. The modulation effects don’t have a huge range of parameters but they too have various different flavours, providing anything from subtle chorus-like effects to alien warfare laser fire. Throughout, though, B2 retains its high-end, professional tone.

There are far too many presets for general ambience effects to go through here, but as we ran through them they all showed a great sense of depth and a nice, wide image. Reflections are rich and the Random control can range from synthetic reverb tones to some truly striking fake spaces. The voicing throughout sounds dense and creamy, but never in a way that can drown a mix.

Sound-design presets range from the sound of maxing out a signal path to dentist’s drill sounds along with plenty of other hard-to-describe sounds. We sat down with the manual for a while and soon found we could master B2 quite well in the first session so it’s also easy to learn for those who want complete control.

– If you want reverb alone

If you need a great reverb and more, B2’s sound and GUI encourage experimentation in tonally rich audio with a deep perspective.