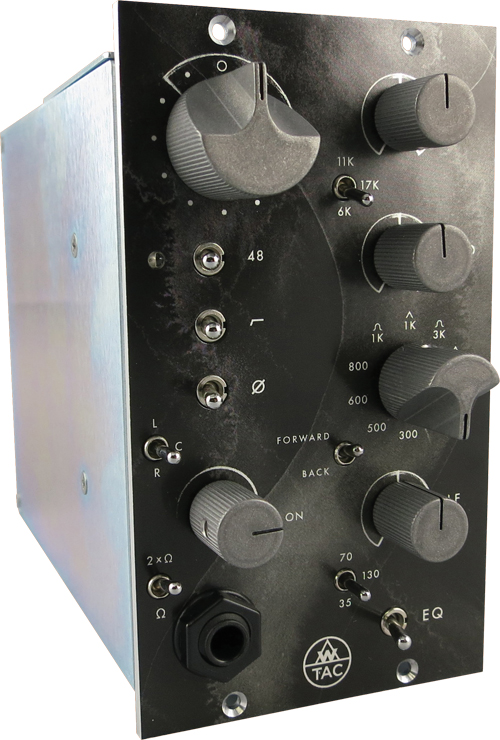 When you call the results of two-and-a-half years of product development ‘Awesome Channel Amplifier’, it had better be just that. So says the Awesome Transistor Amplifier Company – and we totally agree.

The Awesome Channel Amplifier is a double-width 500-Series unit that comprises a microphone preamplifier, a line-level amplifier, three-band EQ, DI input and mixer. Several units can be patched together to form a multi-channel mixer, and several of the Awesome Channel Amplifier’s features have been designed with this in mind, such as the Left-Centre-Right passive mix buss reminiscent of those found on vintage consoles from the 1970s. In fact, the unit aspires to the sound of classic mixers in many ways, achieving this by means of top-quality, discrete internal components, which include a Sowter input transformer, Cinemag inductor and custom-wound Crimson Audio transformer. Grayhill rotary switches and Neutrik jack inputs are employed, which, like all of the components, feature gold-plated contacts; this is a no-expense-spared, high-quality design.

While many audio manufacturers strive to keep signal paths as short as possible, AWTAC takes a different approach, providing a multitude of amplifier gain stages and impedance loading options to give the unit its sonic character. Microphone and line-level sources pass through six amplifier stages, which, the company claims, has each been tuned to be complimentary to the ones before and after it.

The Forward/Back switch alters the way in which the EQ interacts with the output stage of the channel amp; however, when A/B comparisons were made we struggled to hear the difference. Its effect may be more noticeable when several units are patched together, with different signals operating in different modes.

In conclusion, we feel that the Awesome Channel Amplifier really does live up to its name. The mic pre offers plenty of characterful tone options, while the equaliser provides oodles of musical tone-sculpting. We have looked at man

The Awesome Channel Amplifier is just that. It evokes the spirit of classic consoles of the 1970 with a big, full-on sound that makes the very best of every signal that passes through it. Purists might crave a shorter signal path; however, they will miss out on the superb vibe this unit has.