Modular signal chains and touch control are a match made in heaven. Liam O’Mullane gets hands-on with his iPad and Mac in our review of Audulus   Details Price Standalone & AU £20.99. iPad app £10.49 Contact via website Web www.audulus.com Amazon.co.uk Widgets There aren’t many audio applications out there that span the domains of both desktop […] 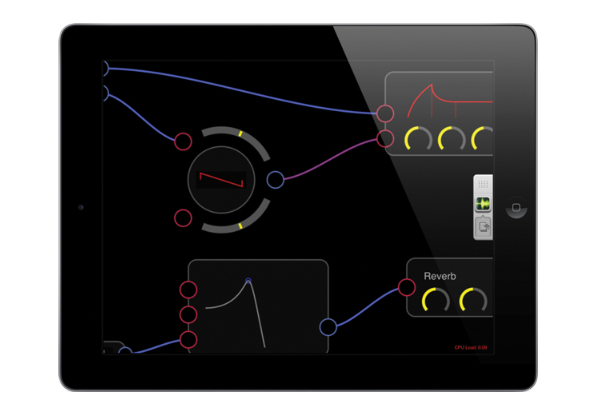 Modular signal chains and touch control are a match made in heaven. Liam O’Mullane gets hands-on with his iPad and Mac in our review of Audulus 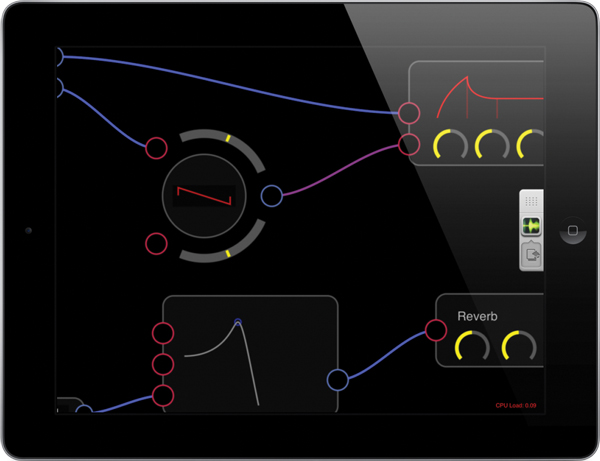 There aren’t many audio applications out there that span the domains of both desktop computer and portable device – Apple’s GarageBand sequencer possibly being the best known. When it comes to standalone synth apps we’d say NLog’s excellent synthesizer wins the popularity contest, and it’s available as a standalone product and AU/VST plug-in for the Mac as well as an iOS app. Audulus takes a similar approach to NLog in that it’s a synth that will run on the iPad and Mac as well as being an AU plug-in. However, it wasn’t until we started our testing that we discovered the true nature of Audulus and fully appreciated how its modular approach makes it quite unique. And it’s not only for synthesis, either, as it can also process incoming audio…

To the Max
Anyone who has used Max, Max For Live or Reaktor will be familiar with the graphical, modular approach Audulus takes to represent a signal path. You can move each object around (referred to as nodes) and wire up each node graphically, making it visually easy to understand. The most obvious and intentional difference is that Audulus’ developers have opted for a much cleaner, simpler interface design. Node parameters and properties can be altered with a single [Ctrl]-click or press-and-hold by touch (Mac and iPad versions respectively). Perform this process over a blank space and you’ll open a node-insert menu instead. With two platforms to choose from, we tested this on our Mac before seeing what benefits touch-control brings.

Point and Click
Loading the standalone version first, we were greeted with an introduction video that explained the basics of getting around the app. Some templates are provided and we looked through these to get an idea of how things worked and interacted with each other. The templates include a subtractive synth, additive synth, filter and kick drum synth to give you an idea of what Audulus can do. Pinch-in/out gestures on a trackpad zooms you in and out, and you can click to drag things around. This gives everything a very iPad-like feel on your computer, but does, of course, require a trackpad.

It didn’t take us long before we felt comfortable with creating and wiring nodes. We’d say this is due to both the app’s great workflow, visual feedback and the fact that we’ve used Max For Live in the past, which has some similar behaviours. As is the case in Max, you can sub-patch certain elements to make them visually tidy to work with or create a simple way to bundle-up a signal path you’d like to bring in to future projects.

Alongside ready-made effects such as delay, distortion and pitch-shift there are plenty of other mathematical elements you can use to create effects of your own. This is the point at which the depth of knowledge required to build your own patches becomes apparent. Like the other programs already mentioned, Audulus is not for those who just want new synth sounds or new audio-processing plug-ins. It’s more about realising theoretical ideas you may have for new ways to process or create sounds. You can be a complete beginner coming to the app for the first time, but be prepared to spend time learning how the theoretical side of things work. The AU version has much the same functionality but omits the template menu and has no immediate presets. This makes it less easy to use, but one thing worth noting in this respect is that both Mac-based versions allow you to load in AU plug-ins as new nodes, and this really opens up the app’s potential.

Touch Down
The iPad version is technically similar to the Mac version but somehow feels more engaging – an indication of how this type of graphical editing benefits greatly from the touch-control environment. When zoomed out you can move individual nodes, while zooming in enables you to edit them. A unique button strip on the left-hand side gives immediate access to undo functions and the tools for identifying connection types and so on. This really helps with workflow, as does a pop-up keyboard for playing synth sounds.

Overall, all versions of Audulus are fun to use, but we especially enjoyed using the iPad version. If this is the same for you, you could always prep patches on the iPad and then import them to your studio computer afterwards for use in your projects.

A well thought-out solution to interacting with complex processes, especially on the iPad version.