It seems like vinyl has never gone out of fashion, but AudioThing might have a short cut to getting that sound. Hollin Jones spins up Vinylstrip. Details Price €55 Distributor Audiothing Contact Via website Web www.audiothing.net System Requirements PC, Windows XP SP2 or later; Intel Core 2 Duo 2GHz / AMD Athlon 64 or equivalent 2 […] 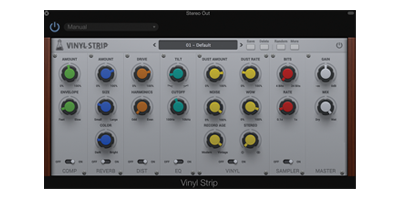 It seems like vinyl has never gone out of fashion, but AudioThing might have a short cut to getting that sound. Hollin Jones spins up Vinylstrip. 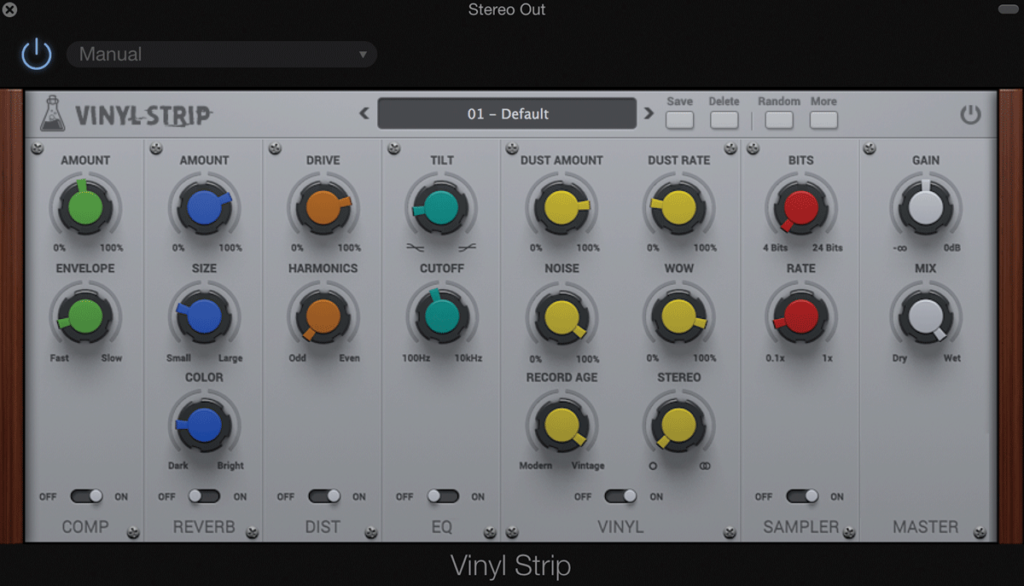 It’s ironic that one of the side-effects of recent decades of technological progress in audio recording has been that some people have started to find digitally recorded sound too clean. There’s a never-ending debate still raging somewhere on the internet about whether or not vinyl sounds better than CD. And whatever your view, nobody can deny that they sound different to each other.

It might be argued that if you want the sound of vinyl you should press to vinyl, but that’s not a particularly accessible route for most people to go down. And sampling from old records is, if we’re honest, a bit passé these days.

As you might expect, plug-ins come to the rescue here, letting you apply specific amounts of vinyl effect to just the parts of a track you want. It’s not a new idea: Steinberg’s Grungelizer was doing it over a decade ago, and Reason has the Retro Transformer. There is still a market for the vinyl effect and the key is in getting the subtleties right.

More controls mean more say over the shaping of the sound. Vinylstrip is a multi-format plug-in from Irish developer Audiothing and gathers together multiple different tools.

In The Groove
You get six modules in the retro-themed interface, and these can be dragged and dropped to alter their order, which in turn can affect the way the sound is processed. There are 15 presets supplied and also a Randomizer button that dials in all-new settings and switches different modules on or off, though it doesn’t rearrange their order.

You can, however, lock or unlock the different sections to determine if they are included in the ‘randomization’. The presets range from mastering through individual drum styles to more esoteric and extreme processing. It’s been designed to be light on your CPU and it certainly seems to be: the processors at work aren’t of a type that are generally hugely processor-intensive.

Each of the sections can be turned on or off and the master channel has a gain and dry/wet control for altering the overall levels and mix of effects. In no particular order, the first module is a compressor with an amount control and fast/slow envelope knob.

Mixing and mastering for vinyl is different than working to digital, and you can emulate the differing styles of compression involved using this section. Next is reverb, with Amount, Size and Colour knobs to add some space to the signal. This can be helpful for adding a slight sense of space to the sound, which is sometimes associated with vinyl.

Distortion is next, with Drive and Harmonics dials to add some dirt and colour to the signal. This saturation or slightly warm distortion is one of the characteristics that some people feel makes vinyl sound more pleasing than digital. Applied gently, it works wonders, though it’s also possible to drive it pretty hard if you like. Then there’s an EQ section with Tilt and Cutoff dials to accentuate the highs or lows and change the centre frequency.

The Vinyl section comes next, and here you get various different controls to artificially add imperfections to the signal. Dust Amount and Rate add virtual dirt to the surface of the record to add gentle crackling. Noise and Wow simulate mechanical fluctuations in the speed of the spinning disc, and Record Age does a few things that make the sound ‘newer’ or ‘older’ in a generic kind of way.

The Stereo knob can make a sound more stereo or mono as you turn it. The last section is called Sampler, and this simulates the effect of old-school sampler processing on your signal. The Bits control can be used to crush a signal and add digital distortion, and the Rate control reduces the sample rate frequency, which causes aliasing.

The Sampler section isn’t, strictly speaking, the same as the vinyl sections, since it recreates an entirely different kind of degradation: digital rather than analogue. It might not be an authentic part of ‘vinylizing’ a sound, but it recreates the behaviour of early samplers and as such is a nice bonus.

Vinylstrip is a great plug-in that can lend a retro feel to anything. Ageing entire songs is one thing, and perhaps something you’d do for audio post production for film. For musicians, you’re more likely to need to put some dirt and crackle on a drum part while leaving the other tracks clean.

Subtlety is the name of the game, and Vinylstrip lets you add anything from the merest hint of age and imperfection through to full-on dirt and grime. A downloadable demo is available, too. 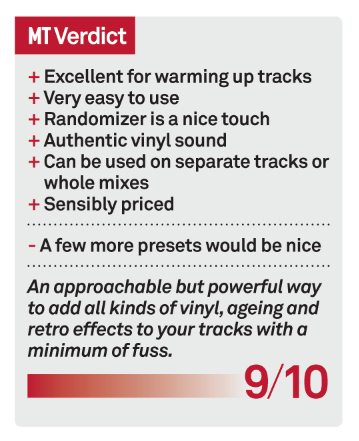 Key Features
● Multi-stage processing
● Distortion, compression and bitcrusher
● EQ, reverb and Vinylizer
● Randomization with section locking
● Drag and drop of modules
● Designed to be light on CPU
● Can silence dust and noise when no input signal is present