While just about any DAW can be used to process and edit stereo audio files, dedicated audio editors such as Audiofile Engineering’s Triumph provide dedicated workflows for audio editing, post-production and mastering, streamlining the process for these tasks and adding a few extra features that aren’t common in general-purpose DAWs, such as metadata editing, ISRC […] 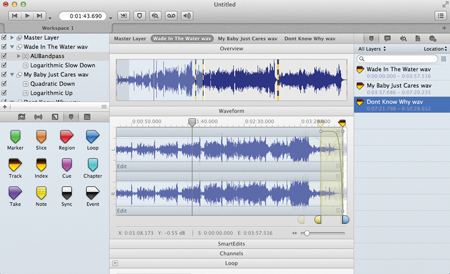 While just about any DAW can be used to process and edit stereo audio files, dedicated audio editors such as Audiofile Engineering’s Triumph provide dedicated workflows for audio editing, post-production and mastering, streamlining the process for these tasks and adding a few extra features that aren’t common in general-purpose DAWs, such as metadata editing, ISRC codes, PQ points and support for Red Book CD burning and DDP files.

Triumph is a Mac-only application, taking advantage of many Mac-specific features such as AppleScript, multi-touch gestures and support for Apple’s Retina displays and the Notification Centre in OSX 10.8. Triumph starts off where Audiofile Engineering’s previous audio editor – Wave Editor – left off. However, the application is such a large redesign that the company felt a new name was appropriate.

We didn’t immediately find Triumph all that intuitive – the layers system and Actions menu, for example, take a little getting used to. The user guide (available both as a PDF and as a free iBook file) is a little basic, but Audiofile is putting up video tutorials which make everything look so simple that once you know how to do something it’s often difficult to understand why you struggled in the first place.

Tracks are added to the Assets sidebar, from where they can be placed into the project as layers. Layers can be arranged adjacent or on top of each other, enabling you to mix multiple sounds together as if in a multitrack mix engine to perform crossfades between tracks or to keep each of the tracks isolated. Each layer can be at any bit-depth or sample rate, with conversion handled by iZotope’s sample rate-conversion algorithms. Interestingly, layers can be used not only to mix in with the other layers, but to modulate the other layers using ring modulation – not perhaps a mastering engineer’s go-to option, but very interesting for sound designers wanting to create unusual effects.

Fades and effects can be added to each layer simply by dragging them from a list onto the desired layer. To perform a crossfade you must add both a fade-up and a fade-down to the respective layers rather than simply applying a generic crossfade to the two as you might in other DAWs. You could even choose to add more than two fades, combining, for example, a linear and a logarithmic fade-down, such that the fade starts with one and then ends with another. This is a little less efficient, but provides far more options for tailoring the crossfade to your requirements, as you can select any combination of fades to get exactly the result you desire. Effects can be grouped together, which is handy if you know that you have a couple of go-to effects combinations. Effects Groups not only retain the multiple effects in the chain, but also any parameter settings, so if you create a really interesting reverb using a combination of delay, reverb, saturation and EQ you can store it as a single Effect Group ready to be brought back in to any other project. Similarly, mastering engineers can bring up their entire mastering chain with a single click, which can then be modified, added to or simplified.

The SmartEdit feature enables you to quickly edit time-dependent features from the waveform view, using handles to control the necessary parameters. Fades are controlled in this manner, as are PQ points for track start/end positions, markers, index points, sync points and even loop flags. If you’re not happy with the accuracy of moving handles around a waveform you can type in the exact position from a popup menu for each SmartEdit.

The Actions list is one of the most powerful features in Triumph, enabling you to perform common actions (you can write AppleScripts to make this even simpler) such as exporting a session in a variety of formats, complete with a DDP containing all the necessary metadata. The only disappointment is the lack of MP3 export as an option – odd considering the number of other choices, including AAC, FLAC and Ogg Vorbis.

Triumph is a great-looking audio editor. It takes a little getting used to and the documentation is a little on the thin side, but it has a comprehensive list of features and is actually remarkably easy to use once you grasp the workflow, which is quite different from that in other audio editors we’ve used. Given that the download version of Logic Pro no longer includes WaveBurner, Triumph is an excellent and low-cost alternative.

Triumph might not be a clear victor in the audio-editing world, but it’s a solid start and we look forward to following its development.