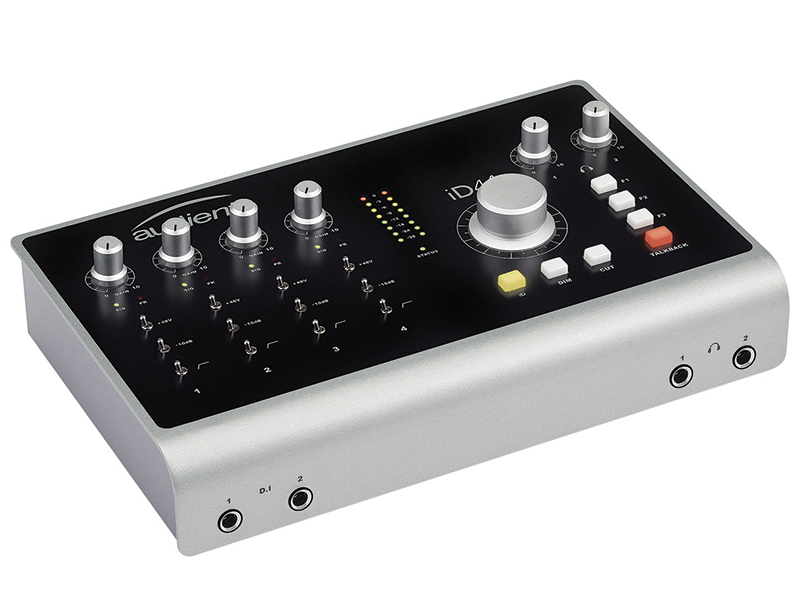 The latest Audient interface offers more ins and outs, plus expandability and that great console sound. Andy Jones plugs in and gets an iD check

Audient’s designer David Dearden has been in the console business since the 1980s and co-founded Audient a couple of decades ago to focus on big analogue consoles, while the rest of the market went digital crazy. As such, many Audient consoles have found their way into prestigious studios and have quickly gained a reputation for providing a rich, yet true sound. I’m not really here to talk consoles as we’re looking at the company’s new iD44 interface, but I mention them as both interfaces and consoles are linked.

One of Dearen’s developments was the ASP8024 preamp which helped give his desks their rich sound. This is now used in all of the company’s interfaces as the input mic pre, so you get a quality console sound at the fraction of the cost within a channel strip and interface combo.

All models in the iD range use these preamps and we’ve looked at several including the iD14 and iD22. The new iD44 delivers the same sound but more of just about everything else, including 20 inputs and 24 outputs, figures that include two sets of optical ins and outs (with support for ADAT and SPDIF devices) delivering 16 of the quoted ins and outs. These are designed to be used with units like the Audient ASP880 8-channel mic preamp, which supplies the actual physical connections. It’s a useful way of expanding a compact interface into something that can handle more multitrack recording work.

iD44 is notably chunkier than its siblings, with a solid all-metal build, and feels like you could drop it from a height and it would quite easily survive. It comes with a couple of USB cables, a Quick-start guide and external PSU as it’s not USB bus powered.

Each of the four inputs has quality rotaries to adjust the +60dB gain, plus switches for phantom power, -10dB pad, polarity and bass roll-off. A large central knob handles the monitor volume and other functions. It also operates with ‘ScrollControl’ so that, with the press of the ID button, you can adjust anything on screen that your mouse is hovering over, although I found it a bit hit and miss in practice.

There are two other rotaries for the headphone outputs. Under the main volume control are switches that dim and cut the monitor signal. Three further switches are user definable – assign them to control speaker switching or cue mix monitoring, for example. There is a dedicated Talkback button and this functionality has been upgraded for the iD44. On the other iD interfaces you were only able to feed the Talkback system from one of the input channels. 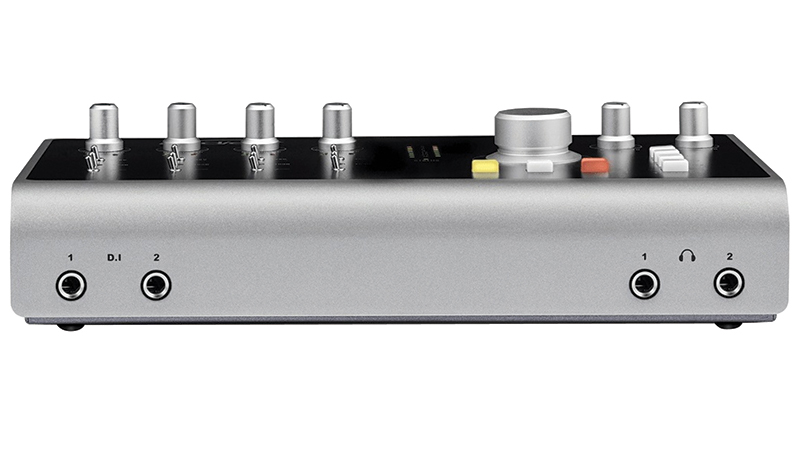 With the iD44, the system can be fed from any other input connected to your computer, so sources like your built-in mic, can be used as the Talkback mic, which gives you a lot more flexibility and frees up all the mic pres for recording. Audient says that it will now roll this out for its other interfaces too.

Peak level LEDs complete the iD44 top panel and there are two headphone sockets at the front plus two discrete JFET DI instrument inputs (for channels 1 and 2).

Around the back of the unit you get the four physical inputs, two sets of speaker outs plus optical and Wordclock out. Usefully, channels 1 and 2 have inserts so you can feed your inputs to external outboard gear and back in again.Overall the iD44 feels sleek, functional, logical and very solid indeed.

You’ll need to download the latest firmware and drivers from the Audient website and be sure to register the product to get all of the software extras (more on these later).

First to the sound and time to test those claims about ‘class-leading’ A/D and D/A converters. I played some recent mixes I have been working on first and it was noticeable how much more solid they felt across the frequency range compared to another (albeit much cheaper) interface.

They sounded more full-bodied with more distinct mid ranges and perhaps with less harsh highs and a much more rounded and honest sound. It really does go to show that upgrading your interface can be as important as upgrading your speakers, in terms of getting the whole truth anyway.

One thing I also always seem to notice on higher quality interfaces is my use – or over-use – of effects which wasn’t so prominent on the cheaper interface but noticeable on the iD44. It was also obvious I’d been pushing some of the heavier instruments like the kicks. My mixing fault, and thanks to the clarity afforded by the Audient, it was pretty easy to correct these mixing mistakes. Less can be more when it comes to reverb – and kick drums – and this test highlighted it!

In terms of the mic pres, this is the real story and whereas the output was noticeably better than my cheaper interface, the inputs here are dramatically different, with much lower noise being the first thing I noticed, even when pushing the levels of the inputs.

Then the much higher sound quality came through. Again there is a smoothness across the mix, not so much colour – which I did expect more of, given the talk of analogue warmth on the website – but more defined transparency. If you do want a little more colouration, the DI inputs offer a noticeable attitude for guitars and bass as they are designed to replicate a classic valve amp input stage.

When all is said and done, with any interface you want low noise and to be able to hear everything on both inputs and outputs and the iD44 definitely delivers on all counts here and is both accurate and smooth right across the range.

Finally in terms of sound I should mention the headphone outs. Two sets offer lots of flexibility for monitoring so both the artist and engineer could monitor with separate headphone mixes. They also deliver a clear and punchy sound. I even thought my monitors were still active when I first used the phones as they deliver such a comparable sound.

The flexibility for outputs doesn’t stop there with the iD software allowing several configurations to be easily set up so you can change your routing options in software or use the user-definable buttons on the front panel for instant recall.

Finally, just time to mention the software bundle that includes a couple of cut down versions of Cubase, a bunch of samples and Loopcloud credits from Loopmasters and more goodies from the so-called ARC 2.0, Audient’s creative hub of plug-in developers, so you get software from Two Notes, Waldorf and more.

Like me, you may have thought the iD44 would be ‘just’ a bigger version of its older siblings in the range, and while it is that in some respects, Audient has included more than just extra ins and outs. The increased monitoring flexibility, extra headphones and Talkback features really do mean it can handle lots of studio situations and those expansion options mean it can grow as you and your recordings do.

The sound quality is what I was expecting, though, given what we have said about the other iD interfaces in the past, but there’s just more of everything here, meaning that the iD44 could be more than a match for a lot of tasks you throw at it. It’s certainly kicked my old interface into touch and I won’t be unplugging it any time soon.

That really depends on what interface you are using at the moment. If you are looking to upgrade from something cheaper then this is one of the best mid-range steps to take. If you compare expensive interfaces to cheaper ones, you can conclude that upgrading your interface can give you as dramatic results as upgrading your monitors.

The key points are how good the mic pres are and how well the AD and DA is handled (so how well your recorded signal is maintained as it goes in and out of the interface). In both cases Audient scores well across the iD range and the 44 is easily the best of that range so far. 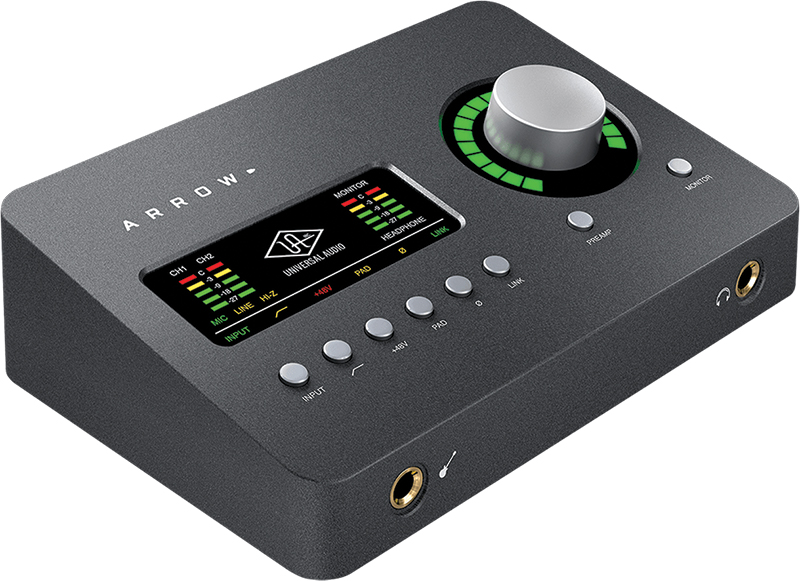 OK, not comparable in many ways apart from the price. UA’s Arrow has less in terms of connectivity but more in terms of UA effects and it’s one of the cheapest ways to get into that vast universe of high quality and classic emulations. 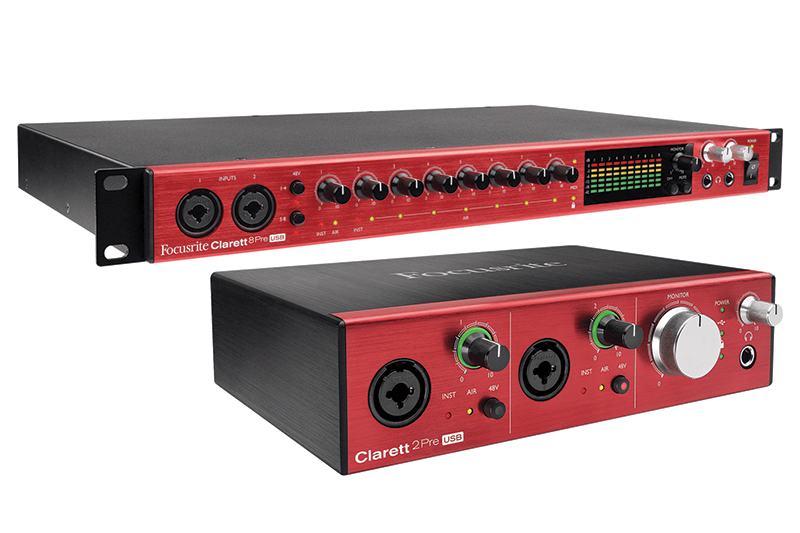 I’ve also recently reviewed a couple of interfaces from this range and these are more comparable. Again the sound quality is right up there, you get a good software bundle and a nice range of i/O options to choose from.