We were mightily impressed by this fully-featured, reasonably-priced interface when we first saw it at Musikmesse. Huw Price takes a closer look… Details Price £190 Contact Audient 01256 381944 Web www.audient.com Audient is one of those companies that doesn’t believe audio quality should be compromised just because you may be buying an entry-level product. The […] 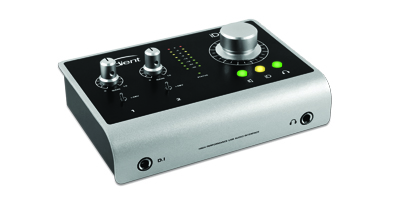 We were mightily impressed by this fully-featured, reasonably-priced interface when we first saw it at Musikmesse. Huw Price takes a closer look… 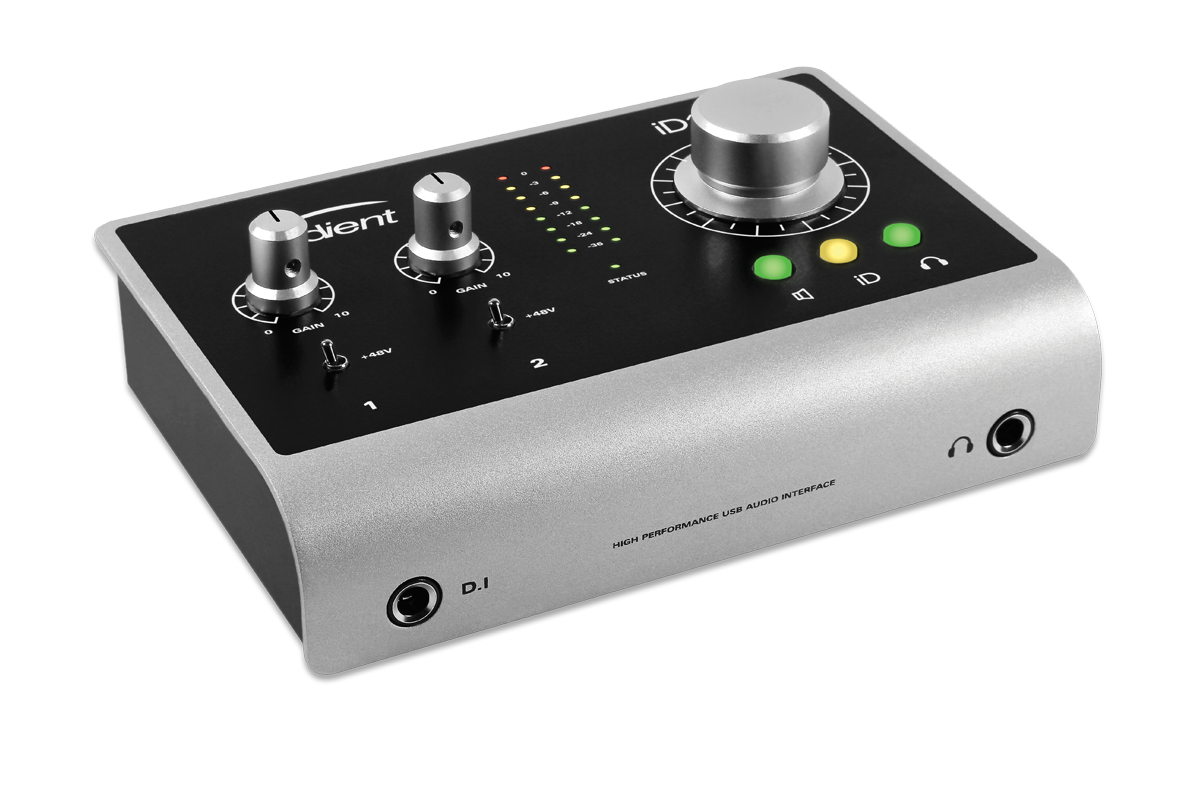 Audient is one of those companies that doesn’t believe audio quality should be compromised just because you may be buying an entry-level product. The iD14 may be about as stripped back as a hybrid audio interface/desktop controller can be, but the ASP8024 Class A microphone preamp circuit is the same as the one used in Audient’s consoles.

Each channel provides 56dB gain, with switches for phantom power, and the onboard digital converters employ Burr Brown technology. The 10dB boost and polarity switches are virtual rather than physical, and can be accessed through the iD software mixer – but more on that later.

In fact, the same preamps are fitted throughout Audient’s product range. They have benefitted from more than 18 years of development with designer David Dearden. There’s also a DI instrument input that uses JFET amplification – an old-school solid state technology that’s considered by many to share a lot of the sonic characteristics of audio valves.

The iD14 is pretty much a simplified and smaller version of the iD22. The features not included with the iD14 are switchable bass roll-off, cut switching and balanced inserts. There are two rather than four line outputs and total outputs are four rather than 14.

There is only one user-defined programmable function key, compared to the iD22’s three, and one cue mix rather than two. The converters in the iD14 have slightly less dynamic range.

However, the iD14 does have buss power and Scroll Control. Buss power means the iD14 can draw the juice it needs through the USB cable that’s used to connect the unit to your computer, but you can’t use phantom power. The Scroll Control feature works in conjunction with the iD App mixer software that is downloadable from Audient’s website. 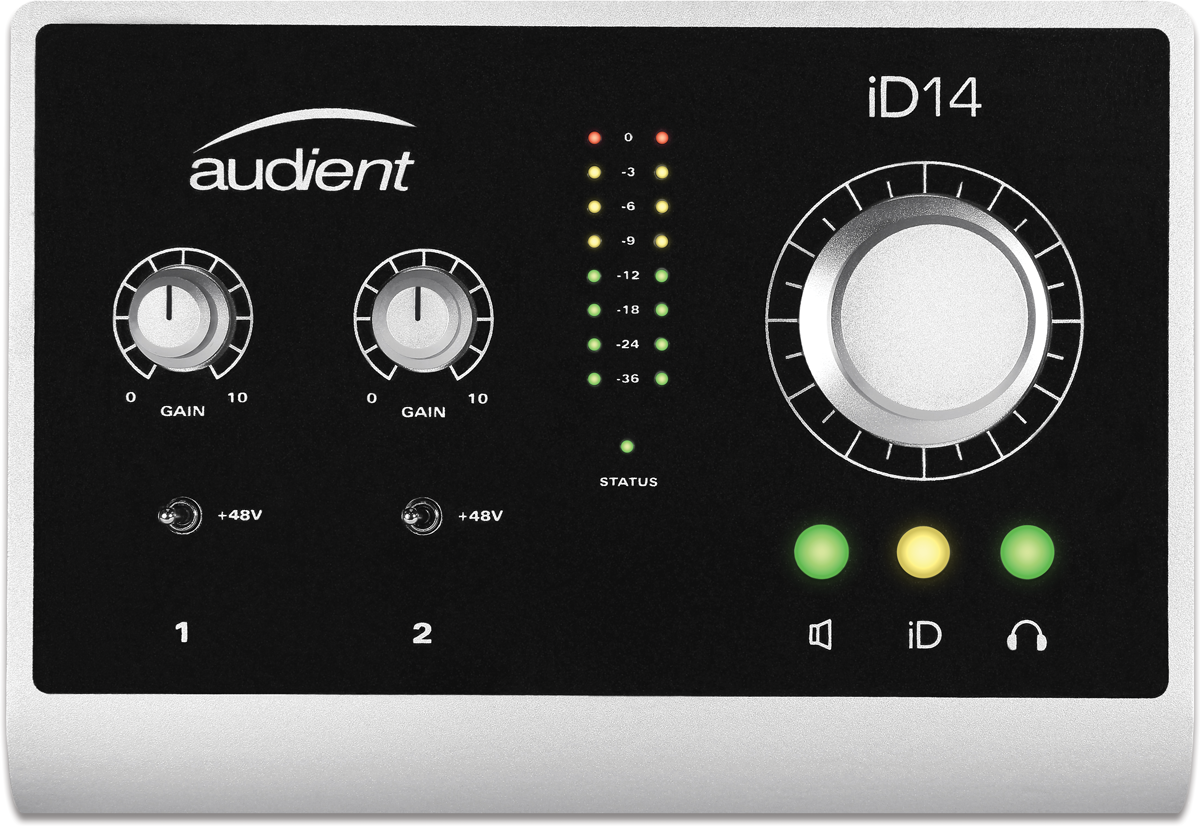 Any adjustments you make can be written into your DAW automation in the usual way. We tried this in Logic, and Scroll Control does a fine job – once you get used to the feel of the manual control.

Alternatives
The Focusrite iTrack Solo (£86.54) is a two-channel USB interface for iPad and PC/MAC. It operates at 24-bit/96kHz and has two analogue inputs – one mic amp with phantom power and one instrument.

The mono plus polarity function is worth a mention, too. When activated, anything that’s dry and centrally panned virtually disappears and you’re left with reverbs, delays and all the other effects that have been applied. It can provide some interesting insights into the ways mixes are constructed.

A maximum of 10 inputs comprises two analogue and eight ADAT digital. Sample rates up to 96KHz are possible with four ADAT inputs, but it’s 48KHz maximum with eight. In addition, there are four analogue outputs.

Not so long ago, we reviewed the iD22 and the bottom line on the iD14 is that it sounds the same. Again, we configured a monitoring system where we could switch instantaneously between our regular interface and the iD14, and the difference in conversion quality was immediately evident.

With the iD14, the high frequencies were smoother and more refined, the bass was more solid and defined and the midrange was super clear and natural. Room ambience and reverb tails were easier to hear through the Audient, too.

Again, Audient preamps sound clean, transparent and classy. Noise levels are commendably low and we think they can hold their own with most mid-priced standalone solid state preamps. The DI is impressive, too.

With electric guitar, it produced a detailed and full-frequency tone with natural playing dynamics and no sterility.

Although it’s not the most fully featured desktop controller, the iD14 isn’t lacking anything essential, except perhaps a built-in talkback microphone. Audient has concentrated on audio quality rather than gimmicks and the result is attractive, sonically impressive and fiendishly useful. 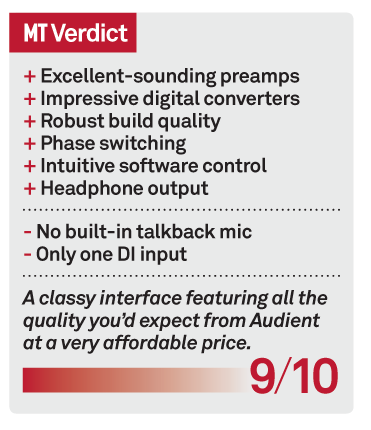