Price £349 each, or £699 for a matched pair with Rycote suspension mount.
Contact sales@astonmics.com | www.astonmics.com

When Aston Microphones launched the Origin and Spirit large diaphragm condenser microphones last year, the company made a huge impact on the recording industry.

The microphones became instant favourites among many professionals, winning shootouts against mics that could easily have an extra zero or two in the price tag. This year Aston are making headlines again with the newly released Starlight, a small-diaphragm condenser with more than a few tricks up it’s sleeve.

Starlight is small diaphragm condenser microphone with a cardioid capsule inside of a custom sintered brass head. The microphone has three voicings; modern, vintage and hybrid as well as a switchable high-pass filter, and pad.

But the striking feature on the Starlight, at least at first glance, is the laser targetting system. Lined up alongside the body of the microphone, and on-axis with the capsule is a class 2 laser, designed to quickly identify exactly where the mic is pointing.

The laser might seem like a gimmick, it isn’t all that hard to know what you’re pointing a mic at, but there are various use cases for which the laser can actually be incredibly handy.

Firstly, for touring engineers the laser lets you mark off the point on an instrument that sounds best, knowing that each night on the tour that you always point the mic at the exact same spot.

Add in a second mic, using a spaced pair technique, and you will be able to know that both mics are pointing at exactly the same spot, which if they’re also the same distance from that spot, should ensure the two mics remain perfectly in phase – at least to any signal coming from that one spot.

Aston are quick to point out that, like any other laser pointer, you definitely shouldn’t point the laser into anyone’s eyes, or at any aircraft. And, more importantly in the studio the laser should be turned off when recording. This is because the laser circuitry can cause some low-level noise when engaged.

Interestingly, when we spoke to Aston about the Starlight, they didn’t spend all that long talking about the laser, but seemed far more interested in the sintered brass head. Sintering is a process by which the brass is formed under extremely high heat or pressure, resulting in small spheres of brass almost like tiny ball bearings. 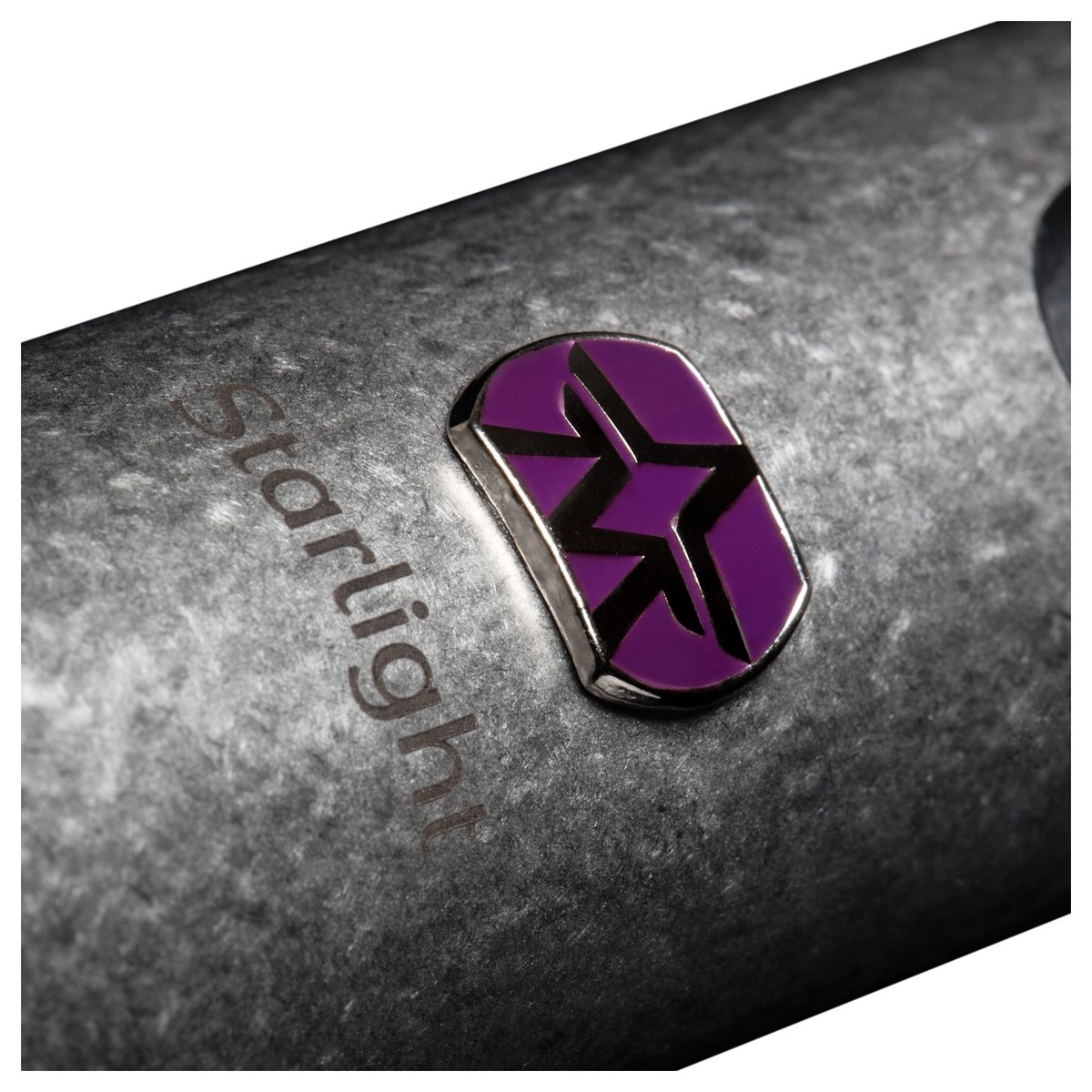 This process, Aston tells us, ensures a remarkable linear off-axis response in the capsule, as well as being considerably stronger than a traditional mesh head.

Coupled with the mic voicing, the circuitry for which is placed between the capsule and the PCB, this should make the Aston Starlight a compelling mic. But the proof remains in the pudding, and we reserved judgement until after we tried the Starlight against some of our own small-diaphragm condensers.

For our first test we used a single Starlight on an acoustic guitar using the Modern voicing. In this setting the Starlight sounded bright and lively. The bottom end was present, but not flabby, but the finger noise was perhaps a little edgy.

A regular problem with small-diaphragm mics. Switching to the Hybrid voicing didn’t seem to help much, the finger noise was still a little edgy, and we felt this voicing had a similar bright, openness as the Modern voicing.

In fact it wasn’t immediately obvious what the difference was between these two voicings, until we compared some big open chords.

With these open chords the Hybrid voicing started to out-weight the Modern voicing, producing a bigger, more full-bodied guitar tone than the Modern voicing. Switching again to the Vintage voicing and the difference was more obvious.

The lively, open sound was replaced with a more neutral tone, with far less attention brought to the fingers and more to the rounded, wooden tone of the instrument itself, while on open chords it sounded perhaps even more full-bodied than the Hybrid voicing, still without sounding flabby at the bottom.

For solo guitar the Vintage voicing was easily our favourite, it lacks some of the hype of the other two voicings, but rather than force your attention this voicing leaves the listener to decide where to focus.

Next up we compared the Starlight with a Neumann KM 184, a staple fixture in studios around the world. Using the Modern voicing the two microphones were almost impossible to tell apart.

If anything the Starlight has a little more bottom-end, than the KM 184, but the articulation of notes wasn’t quite as detailed. However, the Vintage voicing still won us over with it’s more nuanced, balanced reproduction of the signal, at least for solo guitar. As part of a busier mix the extra top end of the Modern voicing might help the instrument to push through a little more clearly.

One of the use cases for the Starlight has to be as an overhead on drums. Small diaphragm condensers are a common choice on overheads, although rarely a favourite of ours, and the laser targetting system on the Starlight will enable us to direct the two microphones to both be pointing exactly at the centre of the snare.

Of course, while this lets us know the two microphones are pointed at the same point, it doesn’t ensure they are in phase unless they are also equidistant from the snare, but it’s a start, and with a little old rope, or an unused mic cable, we were up and running.

With a preference for less hyped overheads, we began on the Vintage voicing and were pleased with the results.

The mics produced an extremely focussed and detailed representation of the kit, with pinpoint stereo imaging. The mid-range was smooth, but lacked some of the warm, rounded sound we prefer on overheads, and the reason we would usually go with ribbons.

However, the top-end didn’t have the obnoxious brittle cymbal smearing that is so common with lesser variants of small-diaphragm condenser.

This was definitely preferable even to the KM 184, which had more crack to the snare than the Starlight (we cheated and used the same mic clips for the KM 184, thus benefitting from the same laser focused positioning), but also more sizzle in the hi-hat, which needed some EQing to sit more easily in the mix.

Every studio needs a pair of small-diaphragm condensers, and by offering three voicings in the Starlight, Aston is making a solid case to be the first mic you reach for when you do.

The mic has a fixed cardioid pickup pattern, and we’d like to see at least omni-capsules offered at some point in the future, which should be fairly simple for Aston to do if there is sufficient demand, which would further enhance the usefulness of this already fairly versatile microphone.

However, it’s not obvious what use a laser targeting system would be with an omni-capsule.

The Modern voicing of the Starlight sounded very close to that of the Neumann KM 184 we compared it to, but having the two other options is a real benefit, especially when the bright, modern top-end isn’t going to suit the material you’re working on.

We didn’t have a pair of KM 84s to hand for testing, but our experience with them would put them closer to the vintage sound, so if you prefer this sound, you could try and find some of these.