Aston’s latest microphone is a versatile dynamic. We discover whether or not the Stealth has the power and versatility to be all things for all voices… 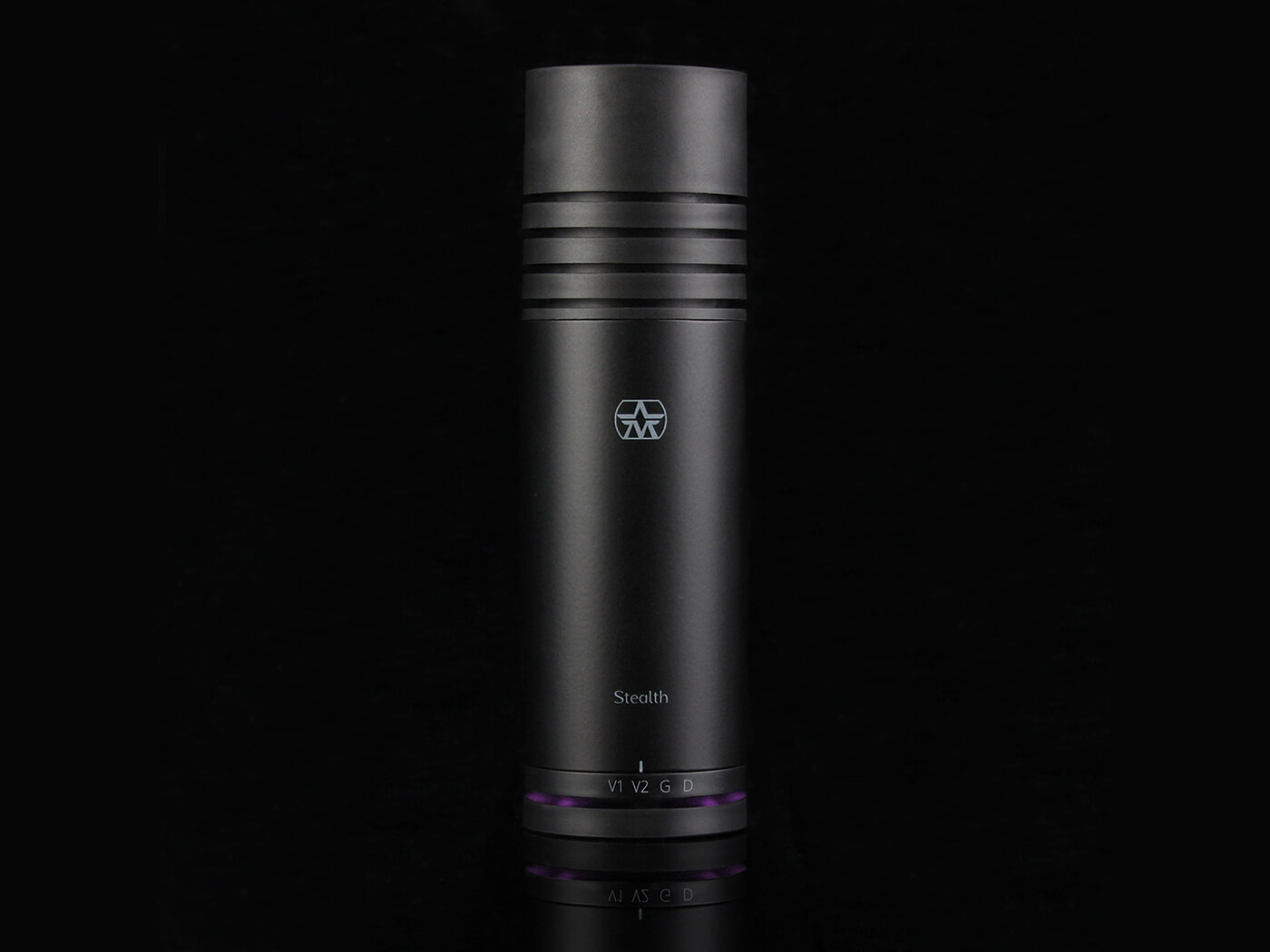 Read our interview with Aston Microphones’ James Young and Jack Munro on its new Stealth model.

In only a few short years, Aston Microphones has become a studio favourite around the world. The company’s Origin and Spirit large-diaphragm condensers are regularly used alongside microphones from more established and more expensive brands, such as AKG and Neumann.

This alone is an outstanding achievement. Other inexpensive microphone brands might be popular among musicians with home studios, but very few have made the leap into big studios. Since the release of these models, Aston has added a small-diaphragm condenser, the Aston Starlight, as well as recording accessories – the Aston Halo and Halo Shadow reflection filters, plus the Aston SwiftShield, Shield GN and Swift pop shields and shockmount – to its range.

Towards the end of 2018, Aston started leaking information about a new microphone coming early this year, and we’ve managed to get our hands on one of the first examples.

The Aston Stealth is a dynamic microphone with an active preamp and four independent voicings, which you can switch between to configure the microphone to the instrument or voice it is being used to record.

Rather than try and take on the industry-standard Shure SM58, as so many other microphone manufacturers have attempted to do, Aston has taken inspiration for the Stealth from the likes of the Shure SM7B and Electro-Voice RE20 – dynamic microphones that are often thought to have more in common with large-diaphragm condensers than their dynamic siblings.

As with its previous microphones, Aston developed the Stealth with a team of top engineers, producers and musicians to ensure that the final voicing was something that professionals would be happy to use. This ‘panel’ was asked to listen blind to a variety of possible voicings for the Stealth, alongside other microphones, including the Shure SM7B and Neumann U87.

Similarly, Aston spotted another voicing that was the preferred choice for a variety of guitars. Interestingly, the same voicing was chosen whether the guitar was a Spanish-style nylon-strung acoustic, a bronze-strung Dreadnought, or a distorted, amped-up electric. It seemed that whatever the style of guitar, the preferred mic voicing was always the same.

With thousands of individual data points pointing towards several preferred mic voicings, Aston took the decision to fit the Stealth with four distinct voicing options, putting the final sound of the mic into the hands of the engineer. 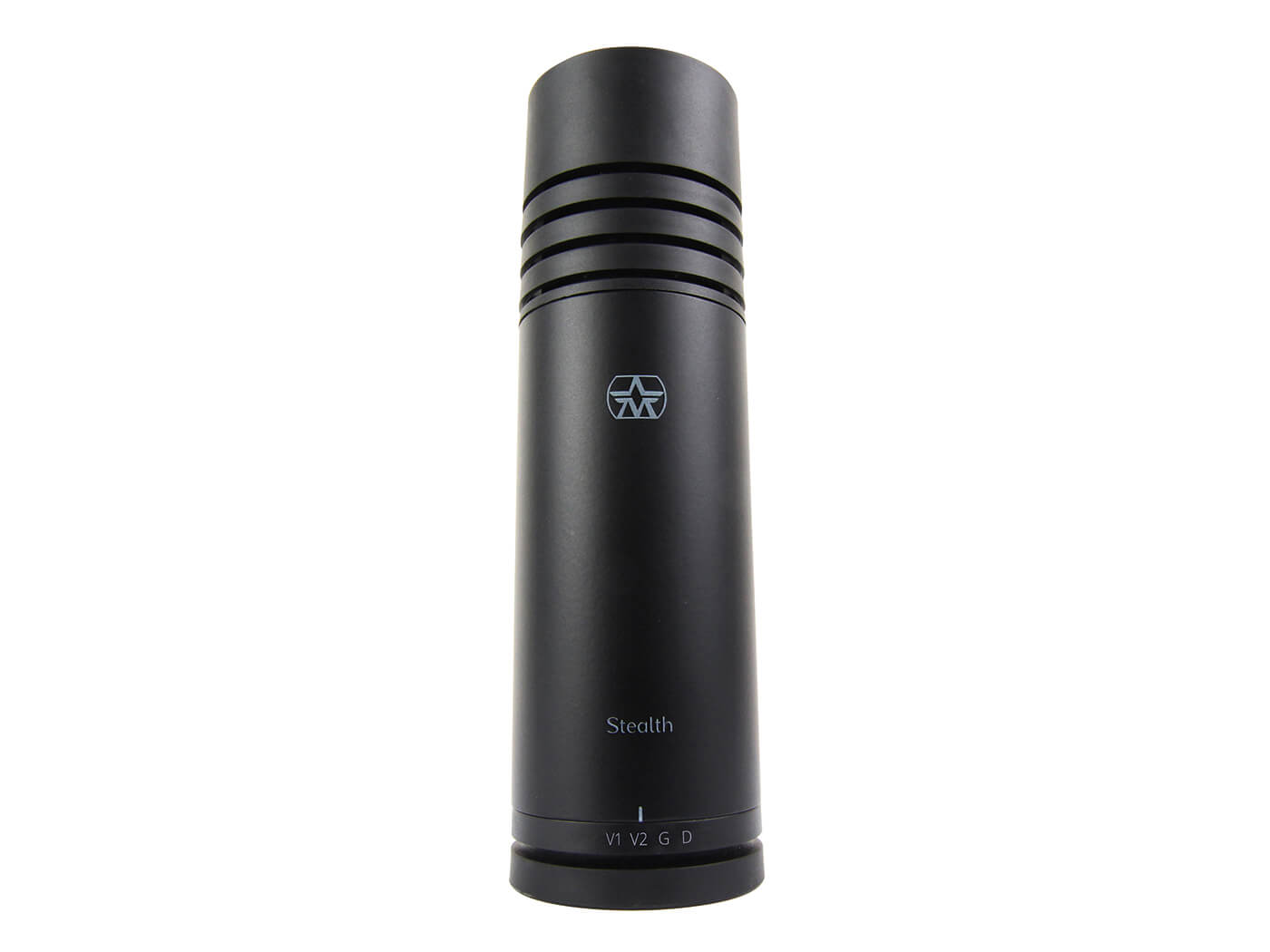 These four voicings are not simply four slightly different EQ options built into the mic, but are discrete signal paths, pushing the audio through a different path at a component level. The first voicing on the Stealth, V1, is the voicing that Aston and its panel found worked best with male voices. The second voicing, V2, similarly relates to the voicing chosen by the panel as being the preferred voicing for female voices.

These two voicings were chosen regardless of the pitch of the vocalist, and Aston believes it has more to do with the timbre and formants of the voices than the pitch itself. The guitar voicing makes up the third setting, G, on the Stealth, leaving the fourth voicing, D, as a distinct vintage voicing, noticeably darker than the other three voicings, designed to be reminiscent of classic ribbon microphones.

Aston is quick to point out that these are just suggested settings and that your own experience with each voicing may differ. There’s nothing intrinsically wrong with using the guitar voicing on a male vocalist, or the V1 setting on a female vocalist. Every singer is different, and every song needs something a little different. So let your own ears guide you.

Looking at frequency plots for each voicing doesn’t reveal too much. All four voicings look fairly similar from 500Hz up, with each one having a distinct lift in the top end, centred around 7kHz and a high-frequency roll off above this point. Below 500Hz, the dark voicing has the most energy, while the V2 and guitar voicings have the least energy. But the real proof will come in our listening tests.

Despite this, the mic is finished in a matte black, which has been designed to unobtrusively blend into the background of a stage setup, hence the ‘Stealth’ moniker. Should you want the mic to be a little more noticeable, a switch on the underside enables you to turn on a built-in purple LED around the base of the mic. This LED requires phantom power to be turned on and is not the only feature on the mic that makes use of 48V phantom power.

When phantom power is detected, the mic activates a built-in Class A preamp, increasing the output of the microphone, from a low 1mV/Pa sensitivity at 1kHz into 1 kilo-ohm up to 150mV/Pa. In either scenario, you will still need an external mic preamp, but the difference in level is significant enough that you will find it much easier to get a healthy level with the active mode engaged. This is similar to using a device such as the Cloudlifter CL-1 with comparably low-sensitivity mics such as the Shure SM7B.

Of course, the source level will also have a lot to do with how much level is needed to be added. On vocals, for example, I find that without the built-in preamp, I was maxing out the gain on my LA-610 preamp and in fact using some additional gain from the compressor make-up section to get a healthy level into the DAW. Yet on cranked electric-guitar cabinets and kick-drum duties – signals where otherwise a pad might be engaged – the passive mode has enough level to suit my purposes.

My tests begin with the Aston Stealth directly into my LA-610, going through the four voicings on the mic itself, before I compare it with other mics. The voicing descriptions prove to be fairly accurate: on a male tenor vocal, the V1 voicing has a deep clarity and weight that was lost on the V2 setting.

Despite the two being remarkably similar on the frequency plot, the overall tone when comparing them is a little more obvious. The V2 pushes the upper-midrange forward at the expense of the low end, giving the resulting performance a slightly nasal and scratchy characteristic. I could probably EQ this out to get something similar to the V1, but why bother when the switch is right there?

In the G setting, the low-end is pushed even further back, with the weight now almost completely lost and the scratchy, edgy upper mids pushed forward even further.

Despite this, there doesn’t seem to be any air around the voice either, leaving it sounding decidedly weak compared with the V1 setting. Finally, the D voicing pushes the vocal back into more familiar territory. The proximity effect becomes a little overly pronounced, especially on plosives but otherwise, the voice sounds huge. This is probably my favourite of the four settings, with the midrange sounding smooth and exciting, while the low end is enhanced in such a way as to make this ideal for our vocals.

The V1 voicing is a little more controlled at the bottom, and has a little more character in the upper range – something I am prone to hiding on my own, less-than-perfect vocal performances. A better singer may well get better results with the V1, but it’s great to have the D voicing there to switch to.

None of the voicings have the airy quality of a high-end condenser mic and if that is the style of vocal you are searching for, you’re still going to be better off with
a condenser like the Aston Origin than with a dynamic. 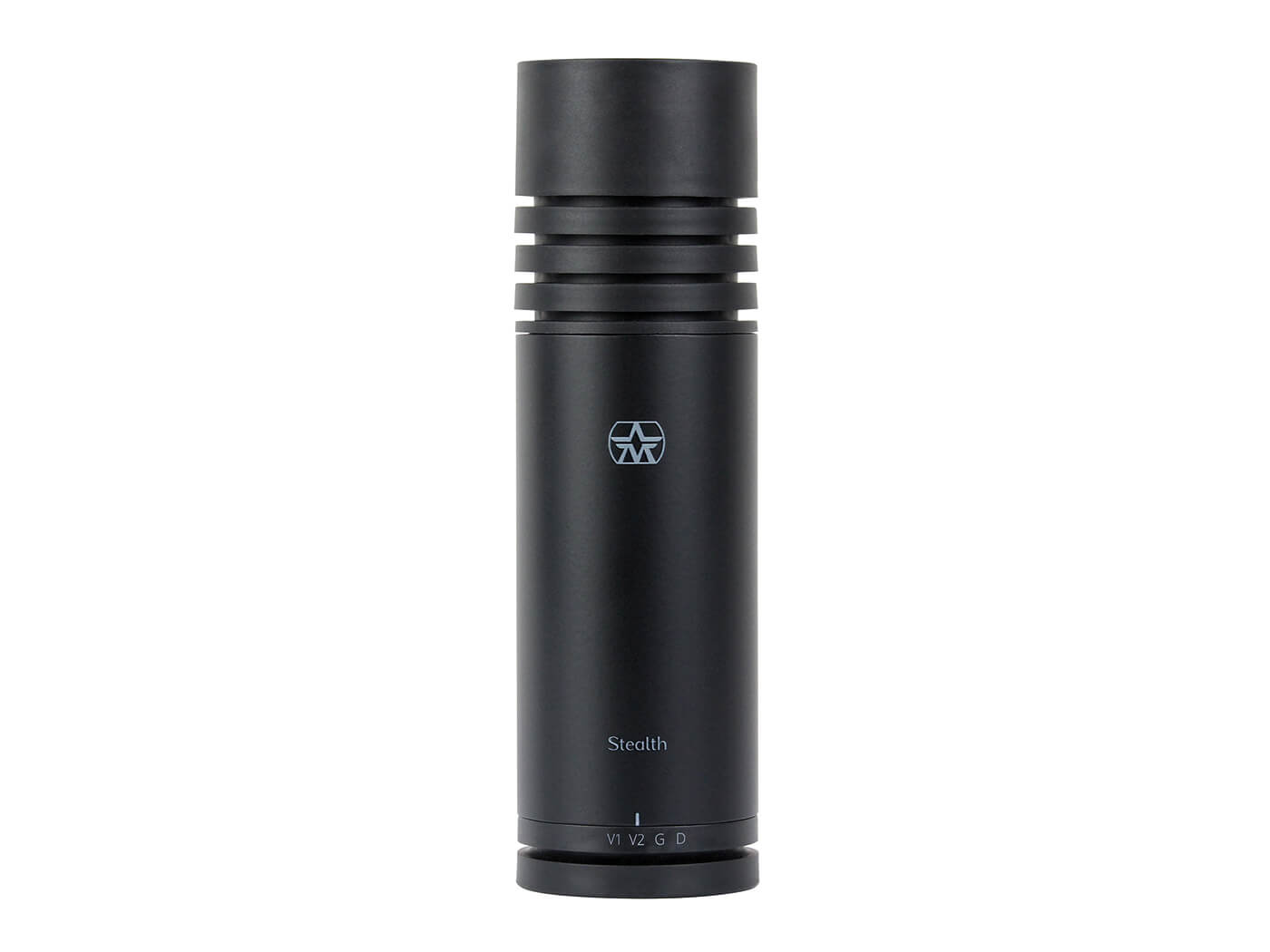 On acoustic guitar, with the mic placed about a foot from the 12th fret, angled at 90 degrees to the neck, the V1 voicing sounds huge. Open chords ring out clearly and carry immense power, although barre chords and finger-picking-style playing starts to feel a little muted in comparison. Switching to V2, the open chords lose a little of their energy, but the barre and finger-picked styles start to come into their own more, with more of the guitars’ natural presence being picked up by the slightly more enhanced upper midrange.

The G voicing is quite similar to the V2 voice, which was quite surprising, as I’d thought this might push the depth of the open chords back even further. But the energy was still there – not quite as powerful as the V1 voicing, but more controlled and a little less boomy. Our fingerpicking really started to shine with this setting.

On electric-guitar duties, with my Fender Blues Deluxe amp, the D setting once again takes centre stage, pushing the low end in a way that makes the amp sound twice as big as it really is, and rolling off any sharp edges at the top end of the amp (these tend to be an issue when pairing this amp with a Strat). The G setting is more open and honest to the character of the amp, and perhaps paired with the humbuckers of a Les Paul rather than the single-coils of a Strat, would take the prize.

All of this goes to show that while the four voicings may well give an indication as to how the mic should be used, it is well worth putting the time in to test them all yourself and to make up your own mind. The intended setting was never a terrible sound, and if you’re in a rush, this will do a fine job, but in a couple of instances, we found ourselves preferring the darker sound of the D voicing.

Compared to the Stealth in V1 voicing, the RE20 sounds a little dull. It’s remarkably flat, with little-to-no proximity effect, and no presence lift, but the end result doesn’t have the excitement that the Stealth has. The PR 35 has a little more energy and presence to it, with plenty of bottom end and again, a remarkably controlled proximity effect, but still doesn’t have quite the low-end weight that the Stealth has (although the advantage of being handheld is still enough that we won’t be getting rid of it just yet).

The Aston Stealth is a fantastic mic. The advantage of having four voicings should not be underestimated – it’s like having four microphones in one. And at only £359,
this is a quick way of expanding your mic closet. The versatility on offer here is huge, but, equally, Aston hasn’t compromised on quality in order to provide four voices. Just as it did with the Origin, Spirit and Starlight before, Aston is reconfiguring the microphone industry, providing exceptional microphones at entry-level prices.

The real beauty of the Aston Stealth is how easy it is to recommend it to almost anyone who records music. If you’re looking for your first professional dynamic mic for recording, and want a step up from the SM57/58, then this has to be on your shortlist.

Not only does it go toe-to-toe with the RE20 and SM7B, at an affordable price, but it has four voicings, making it useful where neither of these mics would work. And should you already have a large microphone closet, then it’s hard to argue against adding something as versatile as this to your collection. 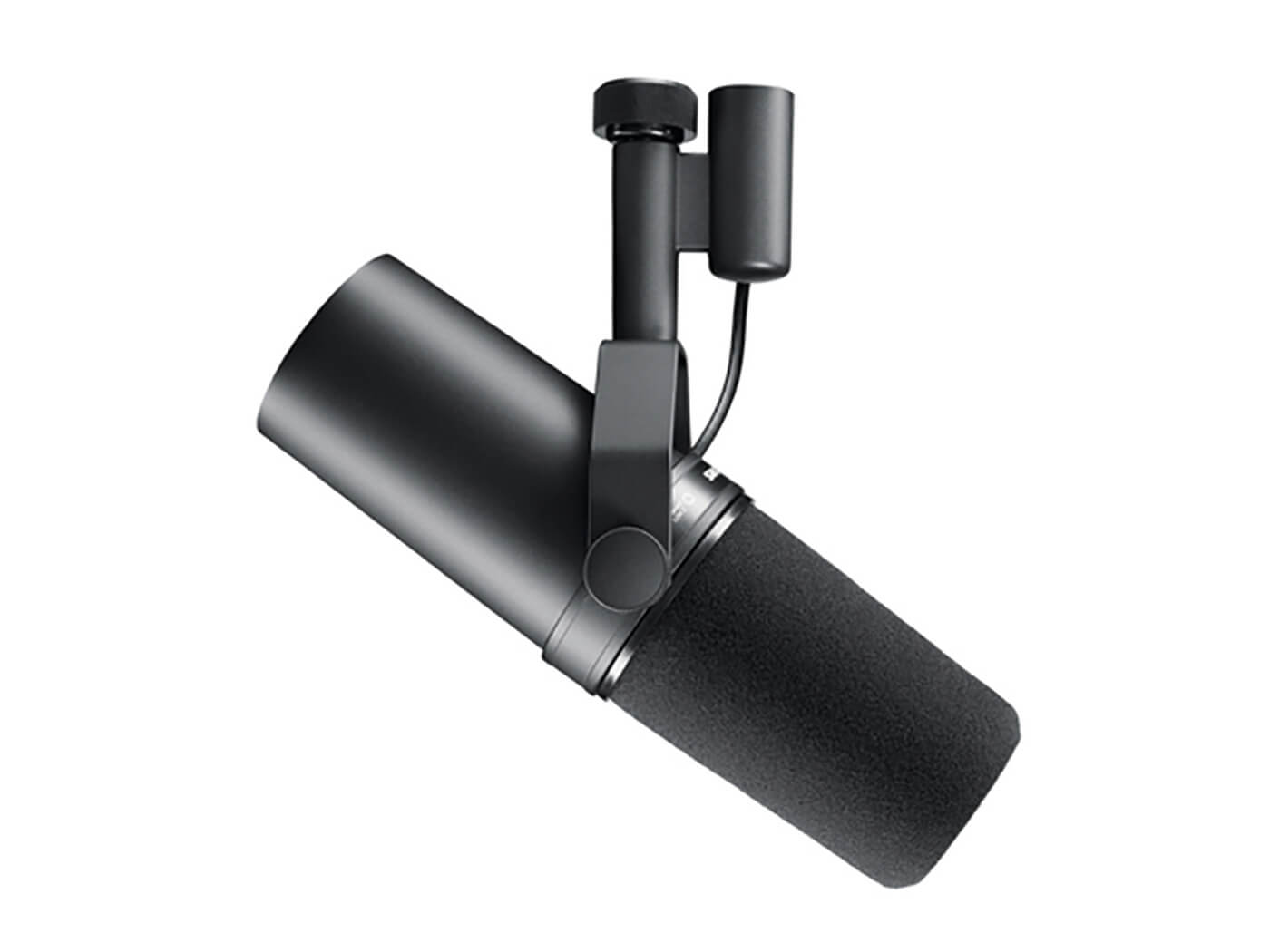 The Shure SM7B has become something of a standard in broadcast studios, and is even a favoured vocal microphone for many engineers and performers. However, it is still something of an unknown in the project studio world. 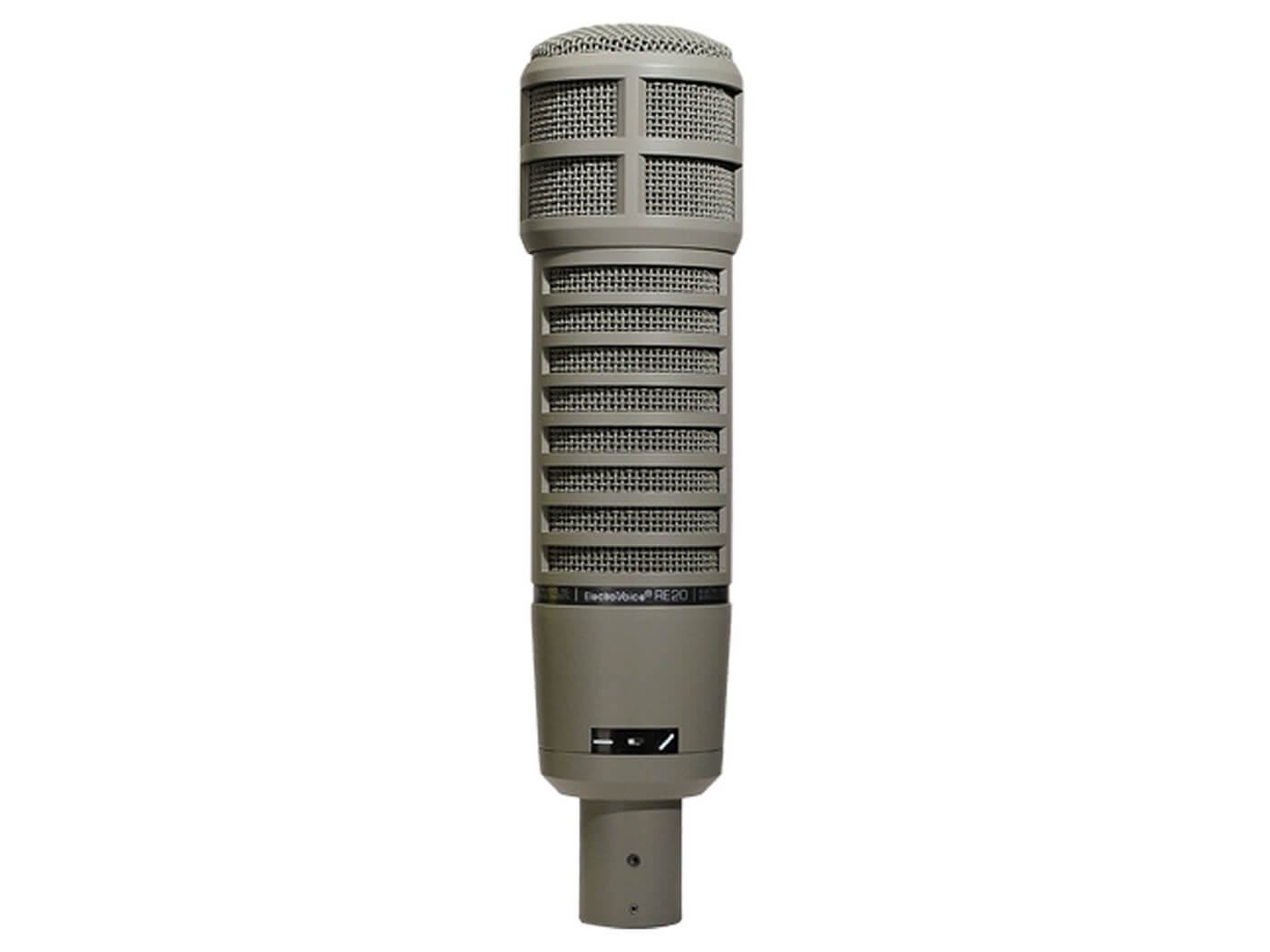 The RE20 has a very clean and flat response, with little proximity effect, making it a very neutral-sounding microphone. Like the SM7B, it has its fans in recording circles, but has never really caught on among the larger project studio crowd.