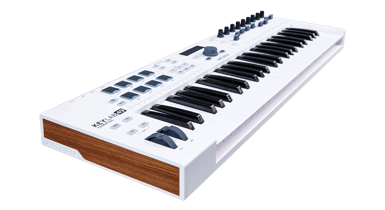 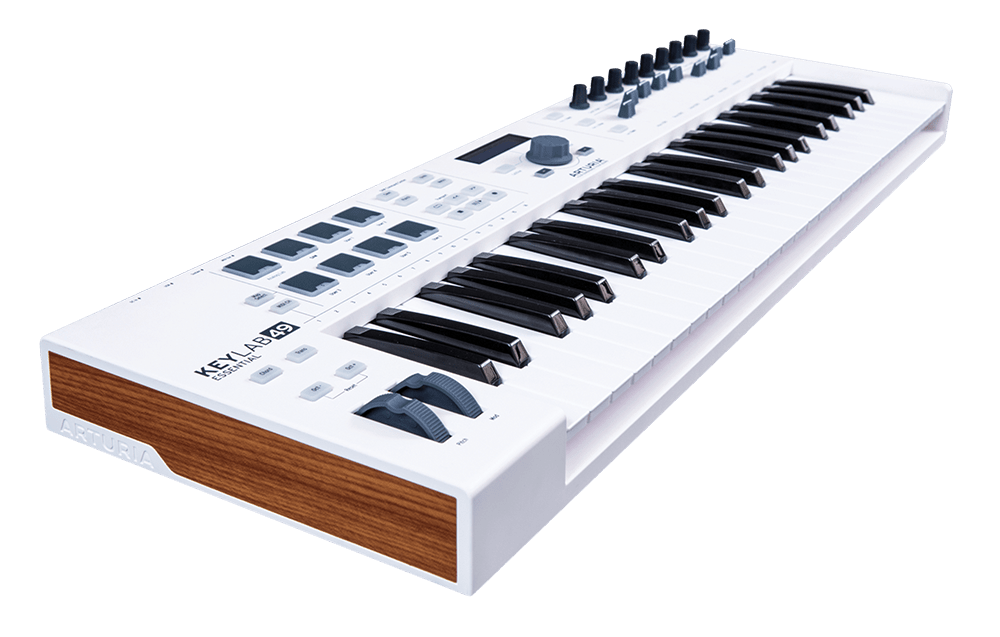 Controllers are so many and varied these days that companies really need a hook to stand out from the crowd. Some go with great looks (Presonus’ Faderport is coming up next issue – swoon) and some go with ‘the software bundle’.

With a history steeped in producing some great software, Arturia has understandably chosen the latter with its latest KeyLab Essential package. Reading back, that sounds like I’m saying it’s ugly – it’s not.

What I mean is, if you’ve produced such cracking emulations of vintage synths with titles like Mini V, ARP2600 V, Jupiter-8V, Prophet V, Oberheim SEM V, and CS-80V, why would you not plunder their rich depths and include, say, 5,000 of their presets to help shift some hardware?

It’s not the first time the company has done this, as you may have guessed when I said this was the ‘latest’ KeyLab bundle. I looked at the first version back in August 2014 and, over three years later, there’s been some dramatic alterations and updates. These will probably be welcome, as I did have some criticisms, notably the annoying software-registration process and the odd instrument dropout in Logic.

What I didn’t criticise, though, was the layout of the keyboard itself and that is the most striking change here. The 30mm faders have been moved over to the right, the pads to the left and the screen has moved into a more central position. This is more logical in hindsight – the screen was far left originally, so, depending on where you placed the keyboard, could cause issues (especially if you had it left of centre, as the screen would have been far, far left of centre).

I have to say, though, I kind of preferred the look of the original. It was very Arturia and fitted in with the company’s aesthetic of the time. This new one is plainer – yes, it’s more functional, but it could have any other company logo on the back. Version one definitely came from Grenoble and I do like a bit of individuality.

What else do you get? Well, it’s a controller keyboard that’s designed to work with multiple DAWs, hence both MCU and HUI compatibility. Those 5,000 sounds I mentioned earlier come wrapped up in a new version of Analog Lab (v2), which is a kind of ‘best of’ of all of those instruments and the keyboard’s rotaries will hopefully make the best of its instant controls, like the original.

As well as the original Arturia software titles I’ve already mentioned, you also get presets from B-3 V, CS-80V, Farfisa V, Matrix-12 V, Modular V, Solina V, Stage V, Synclavier V, Piano V, Vox V and Wurli, covering sounds from pretty much all of the keyboard classics. There’s a new browser to find what you want, too.

One of the criticisms with the original was that you downloaded the software via a Steinberg hub which was too complex (although I think the intention was worthy, as some kind of software registration standard). Now, you simply register at Arturia, enter your serial and unlock details and you get presented with a list of what you’re entitled to download – manuals, the software, plus Arturia’s own software and MIDI Control Center software. It’s just under 1GB for Mac, far less for PC.

The Arturia MIDI software is very useful. MIDI Control Center lets you load and save templates, assign different MIDI information to controllers and even different colours to some – great! Best of all, it’s all done graphically, with a representation of KeyLab Essential on screen and you select each control simply by clicking on it.

Arturia Software Center is less exciting but probably as essential: an umbrella piece of software that links your computer to your online account, allowing you to activate and link up to five computers with KeyLab. Doing this will automatically activate Analog Lab and I soon had it running. All in all, it’s a much slicker process than with the previous KeyLab I tested.

The unit itself is incredibly light and portable and with added USB bus power, is a great controller to take on the road. Despite its light weight, it’s not flimsy; sliders, rotaries and pads all feel good, not cheap, and the main Transport and Global controls have a reassuring click.

Happy with your controller keyboard? Got access to all the vintage-synth sounds you could possibly ever need? If so, then KeyLab Essential isn’t, well, essential. But if you’re looking for a compact and light controller, then this is a much improved and more logically laid-out one than the first KeyLab incarnation, and I say again: for the cash, the package is worth it for the vintage sounds alone.

Getting straight in as a controller and with Analog Lab running, you simply hit the Analog Lab pad (top left of the eight) and the controller is automatically set up with the instrument, with the knobs and sliders ready to control the more dramatic parameters of a preset. The integration really couldn’t have been simpler to set up, as you might and should expect – that is the point of the package, after all.

There are also instructions to get KeyLab Essential up and running with the supplied Ableton Live Lite and UVI Piano, but when you want it to control other DAWs, you might have to do some extra setting up. The Quick Start guide tells you to go to the KeyLab Essentials Quick Start page on arturia.com, but there’s nothing there – and the full manual simply tells you that compatibility with your DAW “will depend on how each manufacturer handles the MCU and HUI protocols”, which isn’t that helpful.

As it turns out, with Logic, for example, you can get the transport controls working straight away by loading in the MCU control surface in Logic. To be fair, this is what is noted by Arturia in the manual, but beyond that, you’ll have to assign CCs manually.

In Live and Reason, it’s a better story, possibly for the former because Live Lite is already configured, but the channel fader and pan controls work out of the box on top of the transport controls. In Reason, it’s just a matter of choosing your control surface (the original KeyLab is there and worked).

Yet what would’ve been better would have been a bunch of templates for popular DAWs included in the preset list in the MIDI Control Center, so you could simply load one in – I know other manufacturers do let you load in templates.

You might still have to define the control surface at the DAW end, but at least having a preset template could help the setup? Otherwise, the software is great and the Live and Analog Lab experiences are slick and intuitive, especially with KeyLab’s Track Controls, which combine with the pads to trigger clips in Live – and the plug-ins I tried aside from Analog Lab worked well, too. Arturia also points out that there is more info on setting up with different DAWs online.

There’s just quickly time to mention a couple of extra features, including Chord Mode on KeyLab that plays chords in a chosen key and those extras within Analog Lab 2. The browser allows filtering by the name of the instrument (from 15), the type of sound (Aggressive, Bright etc) and its sound type (Bass, Lead and so on).

It’s a great way to select through the mammoth number of sounds on offer, although the type could be a little larger for my decaying eyes. With a company that has a pedigree like Arturia’s, you can guarantee that these 5,000 Analog Lab presets are mostly great, with a good variation of everything – all basses are covered; as are leads, pads, and strings.

I might have come across a little negatively in terms of bringing some DAWs under KeyLab’s control but, really, Essentials is a much-improved package over the original. A little extra help for MCU and HUI integration wouldn’t go amiss, but MIDI Control Center and Analog Lab 2 are excellent and the keyboard represents superb value. 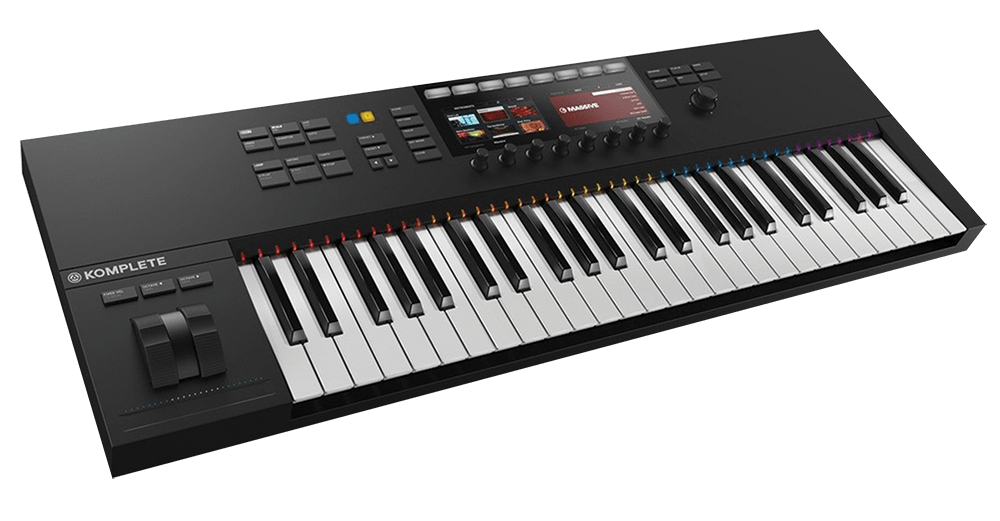 I looked at the original versions of these a while back and v2 is out now. Hard/soft integration is great, although it comes at a price. The software is a great bundle. 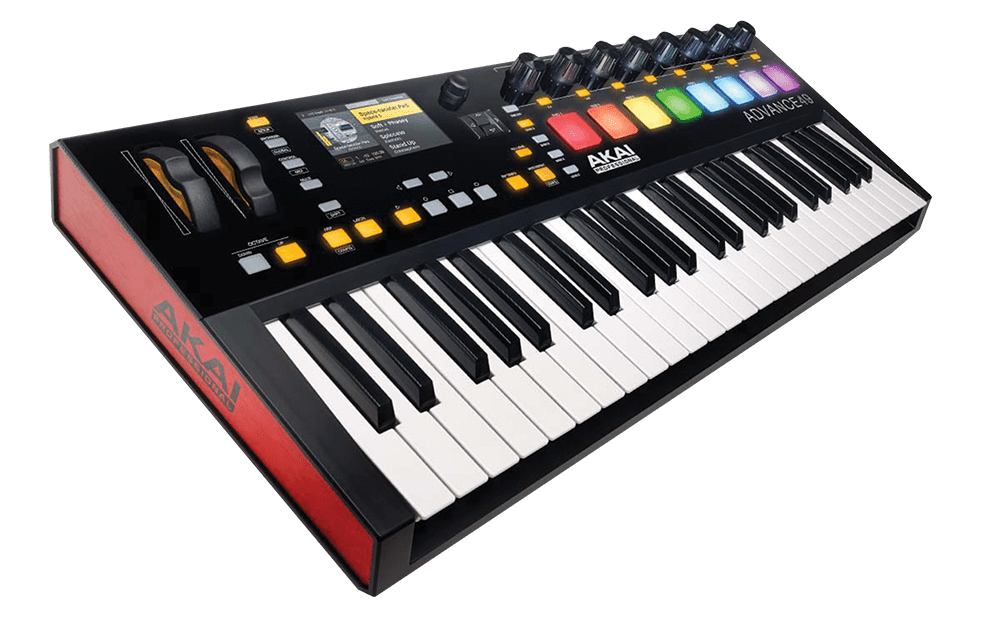 Again, this is all about integration, but this time, with your existing VSTs – and the VIP software at its core really does make this a fantastic hardware/software experience: one where you’ll definitely stare less at your computer screen.