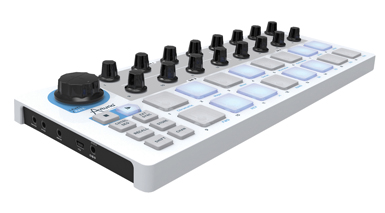 Arturia has made a number of successful inroads into the hardware market after many years of developing its range of classic synth emulations. Where some of its other hardware has been physically quite large, the French company is now going compact with hardware synths such as the Micro and Mini Brutes, and now also the BeatStep MIDI controller.

Designed to cater for the modern mobile producer, it has a few more tricks up its sleeve than may at first be apparent.

Physically the box itself is small but sturdy and a little heavier than you might have expected, though this makes it reassuringly stable when in use. It has rubber feet and a Kensington lock port, and receives power over mini USB from your Mac or PC, or from an optional USB power adaptor if you’re using it in standalone mode.

It’s class compliant so no drivers are required on either platform and it also works with iPads via Apple’s Camera Connection Kit.

When you’re working with a computer you will be sending MIDI over the USB connection, but there are also outputs for a conventional MIDI jack as well as Gate- and CV-out ports on the side. This means it can work independently of a computer, hooked up to any MIDI-capable instrument as well as more advanced devices that can receive control voltage signal.

Interestingly, all the outputs can be used at once so you could be triggering some MIDI hardware and then switch modes and use BeatStep to launch clips in Live, or control Logic’s transport. Thanks to the straightforward layout this is very intuitive to do: simply press the control / sequencer button to toggle between modes and the light scheme changes too, red for controller and blue for sequencing.

So you might be using the device’s internal sequencer to trigger a pattern, but then flip modes to use the knobs to start tweaking synth parameters. With a bit of practice it’s easy to pick up.

Look and Feel
The hardware has 16 backlit pads and 16 knobs, as well as a data dial that can control both level and rate parameters. Underneath this are play and stop commands, mode switch, external sync button, MIDI channel select, preset store and recall and a shift button which enables access to a secondary function for all the pads. These are marked on the faceplate and include scale type and playback resolution.

Sometimes this kind of stuff can be a bit fiddly to use, but Arturia has done a good job with the workflow and it’s all pretty friendly. 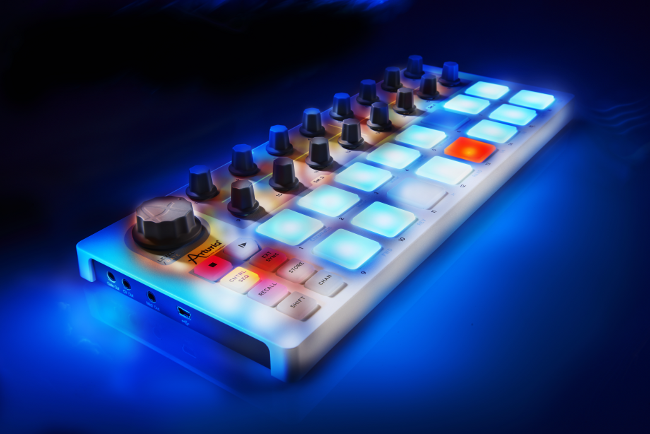 Plugged into a Mac, BeatStep was able to control any MIDI instrument I pointed it at including those in Reason, Logic and Live. It’s so small and portable that it would definitely suit anyone making music on the move or with limited studio space, and indeed it’s a fun and powerful music creation tool in its own right regardless of your working methods.

Although it has no onboard display, you can manage all its settings and customise templates using the free MIDI Control Center software.

This gives you control over all assignable parameters on the hardware and the ability to store them as presets. So for example you could set up a map for your favourite VST, then another to control a Logic project and so on, and switch between them. This applies to non-computer based controls such as CV as well, though it’s easy to make all the assignments in the software then use BeatStep in standalone mode. 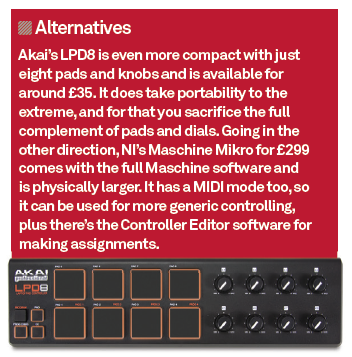 In MIDI controller mode, as well as playing beats you can use the pads as switches or to send program and bank change messages, and in Step Sequence mode you can enter 16-step sequences easily, using the knobs to set pitches and the pads to assign notes on or off. The scale function also means you can ensure only the correct notes for any given scale are available to you.

It’s best suited to beats or monophonic parts like basses or synth leads, but the addition of the knobs means it’s also good for synth parameter tweaking and DAW control.

BeatStep is an excellent little MIDI controller. For triggering in software it’s intuitive and fun to use, and it also works as a MIDI hardware trigger and sequencer via its more old-school outputs. Best of all these can be used concurrently by switching modes on the fly. The setup software is well designed, and the unit itself is sturdy and fun to use. At this price, BeatStep is a great choice for anyone working with MIDI-triggered instruments, be they in hardware or software form. 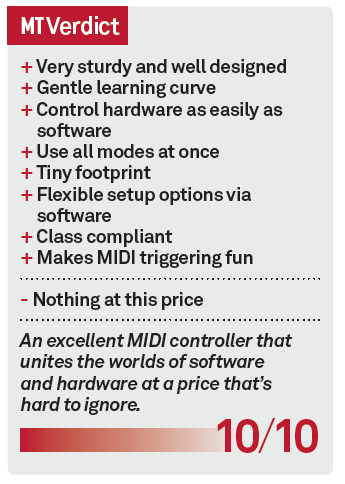