Arturia’s all-in-one hardware sequencer has become an essential part of many studios and live rigs. Dave Gale dives into its latest firmware update… 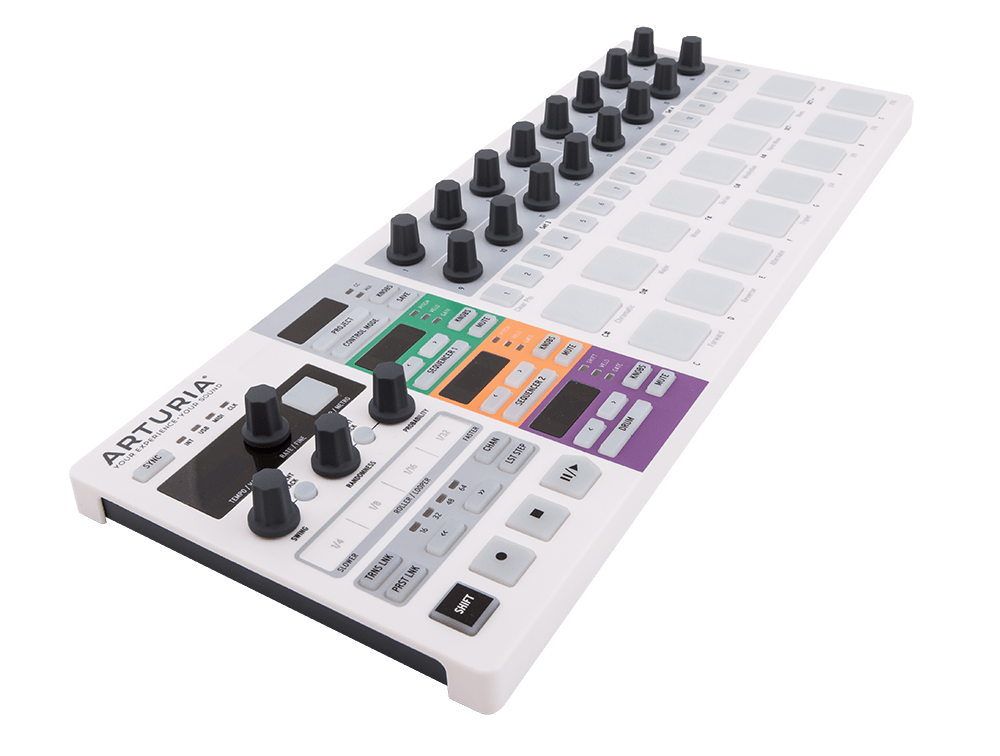 The popularity of the BeatStep Pro is now fairly well established. While many in the Eurorack community like to keep their precious modules safely tucked away in cases, some are willing to break this rule in favour of Arturia’s little wonder, and for very good reason! In just a couple of years, it has become an essential part of many live and studio setups, thanks to its portability and huge flexibility.

For those unfamiliar with the BeatStep Pro (where have you been?), in essence, it’s a hardware sequencer that offers two channels of melodic sequencing, partnered with eight channels of drum triggering, all of which can happen over any number of steps up to 64. Many will choose to use it as a traditional 16-step affair, with its 16 pads and correlating pots for controlling note pitch, etc viewed immediately from the front panel.

The melodic channels feature Pitch CV and Gate, along with an auxiliary CV (labelled Velocity), which can be used to send to other CV elements, such as a filter cutoff, within a modular, or a mono synth equipped with the appropriate CV input for this level of control.

On the most basic level, it’s impressive enough, but for many, what has made the real difference is the ability to connect and use it in so many different environments. It can easily and quickly become the clock master for a home or live setup, offering sync clock in and out, and clock division, too, while also connecting to all manner of devices, old and new.

Turning our attention away from the basic hardware, let’s now consider what the Version 2 update brings to the fore. Firstly, updating the device is a simple business, through a connection to a computer and the loading of Arturia’s MIDI Control Centre software, which will immediately detect the device and offer options for an update. Once complete and rebooted, we’re good to go and V.2 awaits… 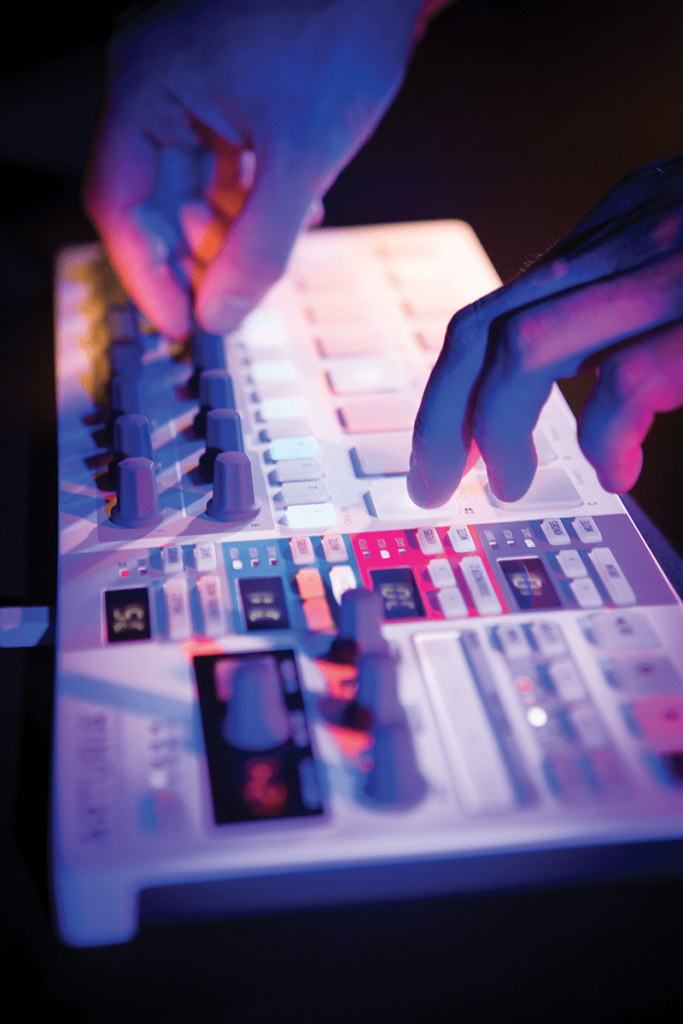 We’ll start with the major stuff and the drum sequencer, which now offers a polyrhythm mode. In essence, this means that it is possible to assign the number of required steps at the drum part level, so it is quite possible to have a four-step hi-hat alongside a 16-step cowbell, or if you want to get truly polyrhythmic, go for any manner of odd number, across all instruments.

This is a useful duplication of the sort of thing that has been possible in Eurorack for a while, albeit with greater flexibility and control, thanks to the multilayered drum triggering of the BeatStep Pro.

Entering this mode is merely a couple of button presses away, which in many respects leads me to my first element of criticism: much of the new content, while wonderful, is to be found ‘under-the-hood’ and will require a good memory for button presses, or the useful ‘Cheat Sheet’ which can be printed from Arturia’s website. Familiarity with the operations you use regularly will help, but it’s a necessary evil when concerned with updates of this kind.

Next up, Arturia has now implemented a speedy method of Pattern Chaining, meaning that it’s very easy to chain together patterns within each sequencer level. By pressing shift, the sequencer level and the pattern number, the task is quickly completed by hitting the order of sequences required – it really is that simple! This is particularly useful when playing live, as the spontaneity that is available here is
a real boon in performance.

Looking for new ways to enter step based information, it is now possible to hold an appropriate step and play or enter/overwrite a note, by simply hitting a pad. Alongside this, there is a new octave-randomisation mode, where a given melodic line is open to random transposition, to a degree which is set by the user. I’m less convinced by this latter operation, wanting my sequences to be the way I played them, and not prone to octave deviation.

Perhaps the most manually playable aspect of the update comes in the shape of the new ‘Roller/Looper’ functionality, where it is now possible to hold either a drum or melodic note as played live, and have it repeat, as desired, according to your finger position on the Roller Pad.

Taking this further, when playing one of the melodic sequence tracks, playing chords and holding the roller will now induce arpeggiation, with the roller altering the trigger timing. This can also be recorded and transposed, making it another useful ‘live’ element to add to proceedings, although it will require some dexterity with the pads, in keyboard mode, which is not especially easy if you are wholly accustomed to playing a piano-style keyboard. 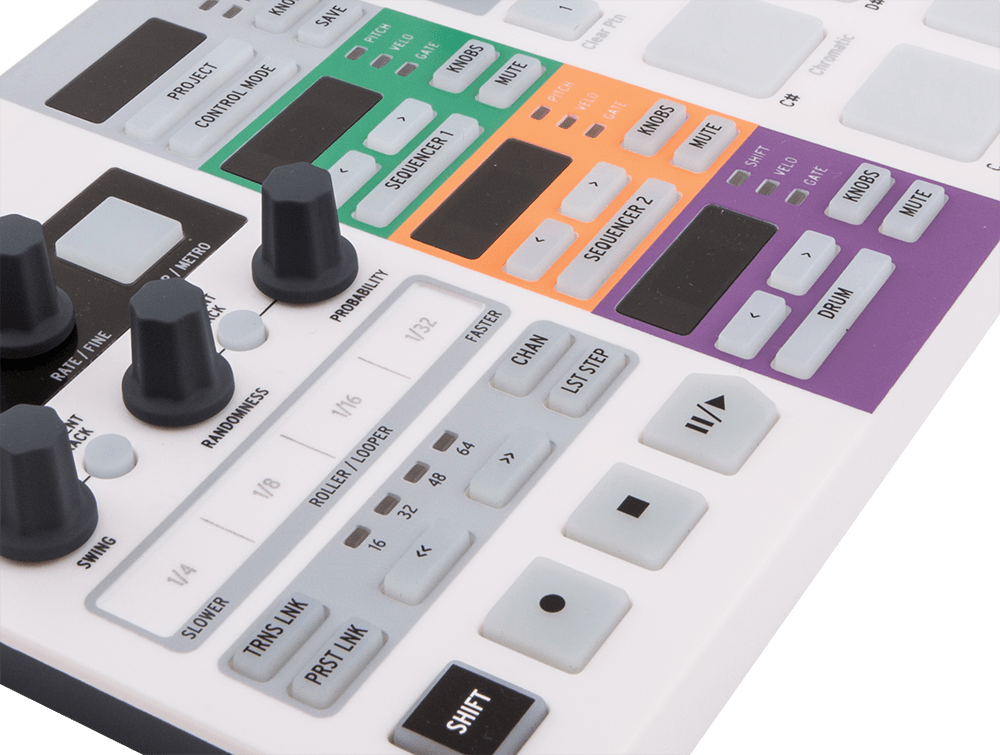 If you’re after an affordable hardware controller that interfaces easily with old gear and new then the BeatStep Pro is the ideal choice. CV, MIDI and Clocking options all on a single device is pretty rare, and according to my own experiences, the BeatStep Pro handles everything with ease. This firmware update makes an already tasty proposition an essential one.

Very sensibly, Arturia has noticed the popularity of the Korg Volca series and implemented features that will make Volca integration far easier. This starts with clock matching; the Volcas have always worked at different clock rates to the rest of us, which makes it difficult to immediately clock them, so this is a welcome addition, along with the ability to specify channel settings, which will be especially useful when triggering drum style notes, from the Beatstep Pro to a Volca.

Like many of the other features which are under the hood, there will be an element of setting up to do before using, which will require the Arturia MCC software again. If these things tempt you for live usage, be sure to get your settings right before you leave home without your computer, as you will be rather sunk otherwise!

Alongside the major stuff, there are a raft of other useful smaller features, one of my favourites being the ability to clear a single drum track at a time, with a press of shift and the pad concerned; far quicker and easier than previous options. There is also now the ability to apply ‘ties’ in drum sequences, which will be great for sustaining samples and open hi-hats alike.

There has also been a tweak to the Velocity CV (perhaps better considered an Auxiliary CV) which can now be scaled, making it much more useful in context with modules in a Eurorack, where CV inputs can often differ vastly, from one module to another. There has also been some attention paid to the stability and accuracy of the sequencer which, to be fair, was already pretty good.

Who doesn’t want something for nothing? This is a significant upgrade which adds a bunch of further functionality to the already substantial BeatStep Pro. Many of the developments seem aimed at the live player, which links in nicely with the current interest in live modular performance, but there’s plenty there to entice the studio based musician, too. The fact that it will run seamlessly alongside your computer makes it a nice bridge between DAW and purposeful sequencing hardware. 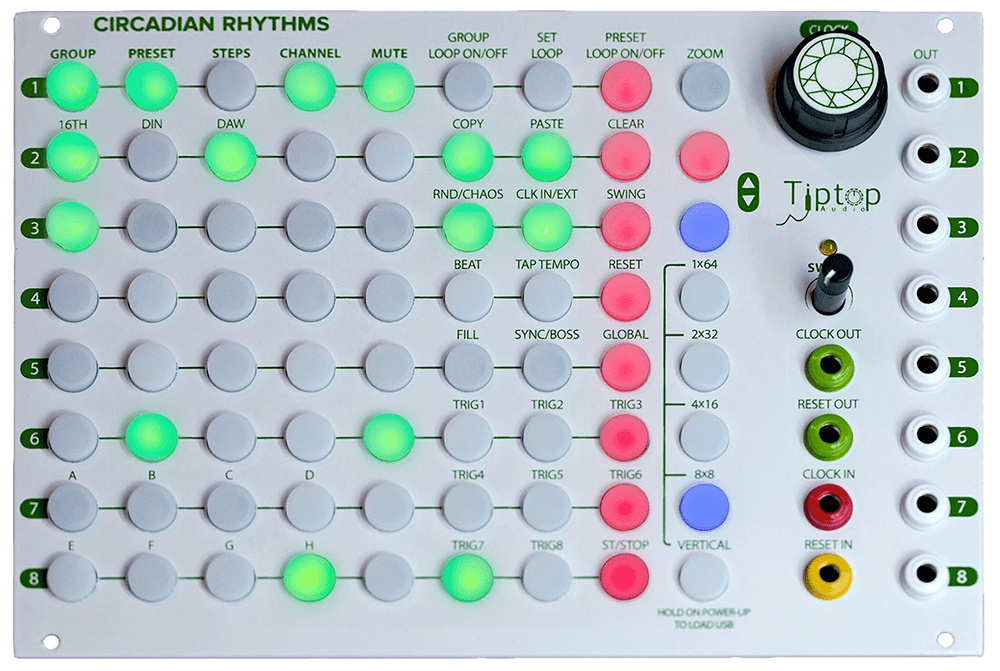 Coming in at 36HP, the Circadian Rhythms module boasts a very substantial eight channels of operation. Offering on-the-fly control and beautiful backlit illumination, it’s become known as something of a favourite for live use.

While the SQ-1 is very basic, especially when compared to the BeatStep Pro, it is a very useful little step sequencer, which will offer either 16 steps, or two channels of 8 steps, delivering messages via CV/Gate or MIDI. small, cheap and endearing!