Last month saw the birth of Arc Festival; a new music event in the Bristol calendar that focuses on cutting edge music and visuals, with headline acts including Clark, The Black Dog, Nathan Fake, and James Holden. Being fans of electronic music, festivals, and alcohol, we thought it only right that we pop along and […] 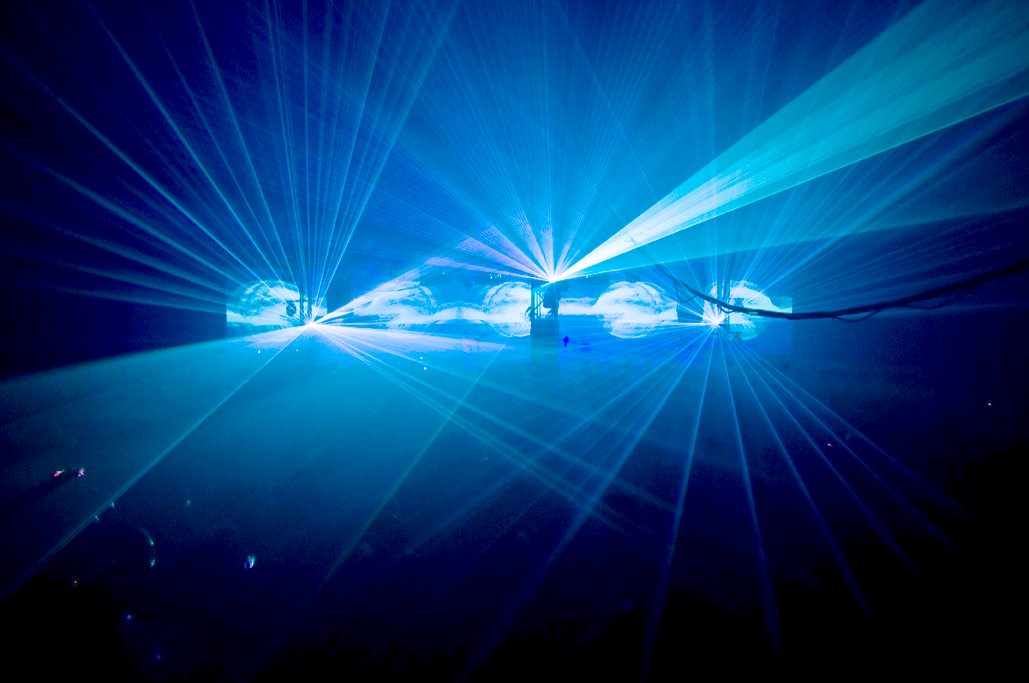 Last month saw the birth of Arc Festival; a new music event in the Bristol calendar that focuses on cutting edge music and visuals, with headline acts including Clark, The Black Dog, Nathan Fake, and James Holden. Being fans of electronic music, festivals, and alcohol, we thought it only right that we pop along and check it out...

The size of the grounds was actually surprisingly small, despite the fact that there were a total of five stages on offer, mainly due to the fact that each stage was housed either in a dome or large marquee, and the sound separation was excellent. This made it easy to wander from tent to tent taking in the sounds, and absorbing everything on offer. We arrived fairly early to see local duo Behling & Simpson take to the Polygon Stage with some bass heavy house and disco, before wandering outside to quaff some cocktails and enjoy the (mostly) sunny weather.

There were a range of artists on offer from the big name DJs, to smaller local acts and students from Bath College and Bath Spa Uni performing live electronics with a plethora of kit. Each dome had a distinct vibe including dark and ambient 360 degree visuals in one blacked out tent, and a smoke machine that seemed to be constantly on in another, with sun streaming through it’s curved white walls. Later on in the evening this combined with some acid-tweaking techno and turned the dome into some sort of heavenly warehouse rave!

For us, the star was undeniably Clark, who breathlessly spun together tracks from several of his albums, sliding from synth-heavy hip hop, to slamming, glitchy acid riffs. He managed the difficult task of blasting out quirky, cutting-edge sounds, yet keeping the crowd moving with catchy riffs and beats. 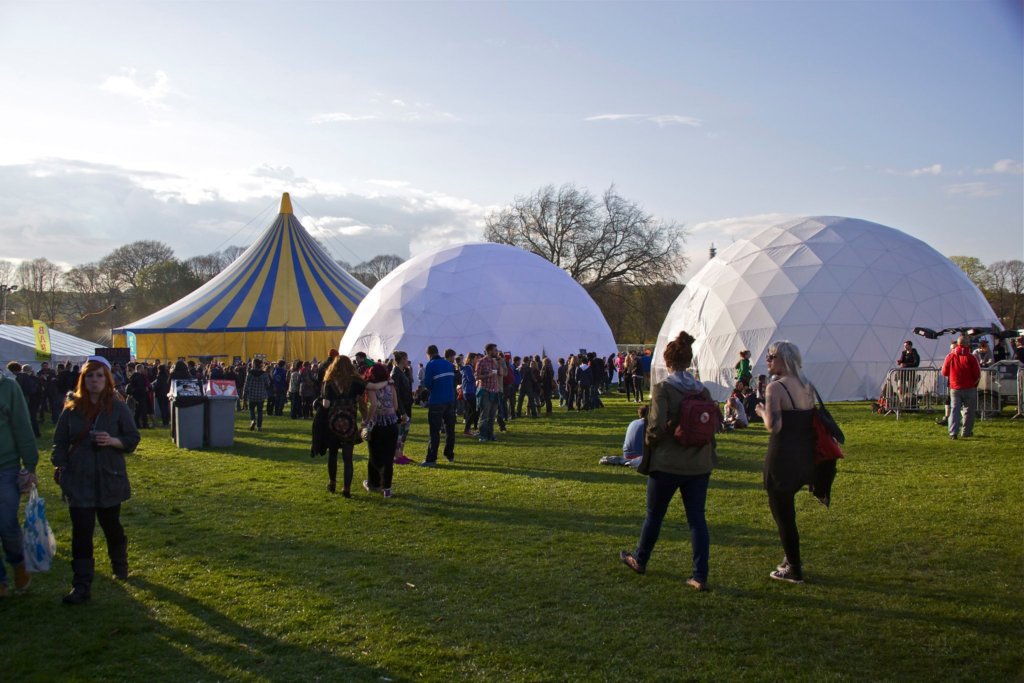 We were especially impressed with the sound quality in the two main tents, and the amazing visuals including projection mapping, a huge panoramic screen using 4 massive projectors, and some insane lasers that were MIDI’d up and sync’d to the music. Despite it being an audio visual arts festival, it wasn’t long before the usual Bristol madness was in full effect, with plenty of fancy dress, and a guy in a tutu who looked to be having the time of his life. Although a fair bit of the music was on the dark, glitchy and sombre side, there was an upbeat, party atmosphere throughout. The only thing we felt could really be improved, is to possibly have a slightly broader range of music, including some more upbeat, live electronic acts, and a few other music styles. But hats off to the Arc team, as this was a slick festival debut, and we shall definitely be returning next year. 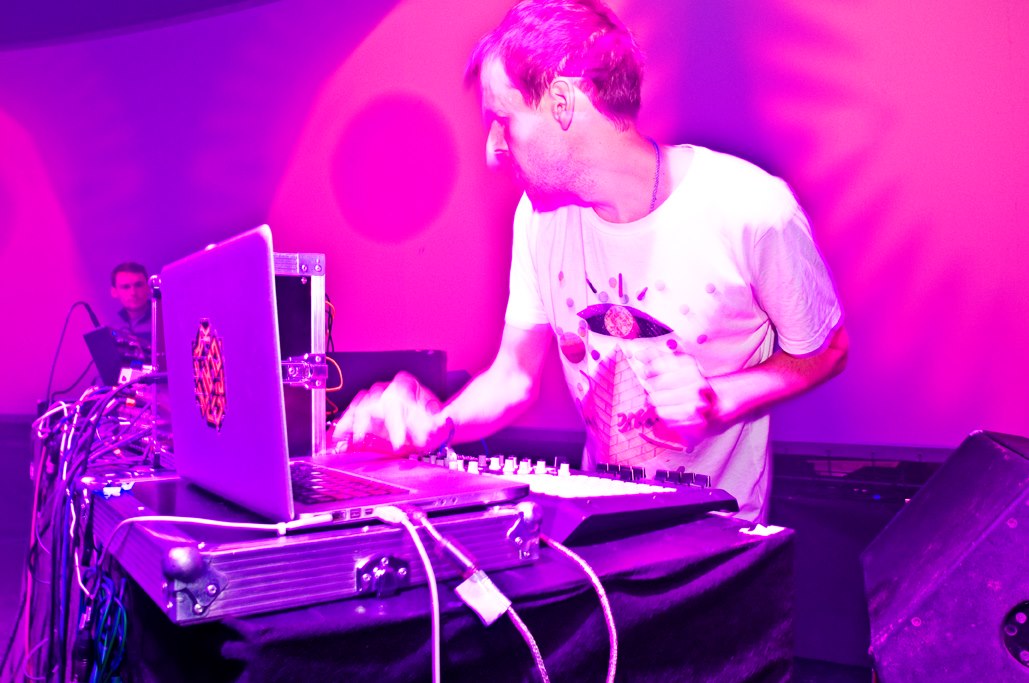 More info can be found at http://www.facebook.com/arcfestival or at the official website here

We also caught up with Technical Director Will Young and quizzed him on how they managed to sync up the audio and visual elements;

“Extracting useful data is key when it comes to making visuals fit to audio and there are two main areas of interest here, timing and audio analysis. 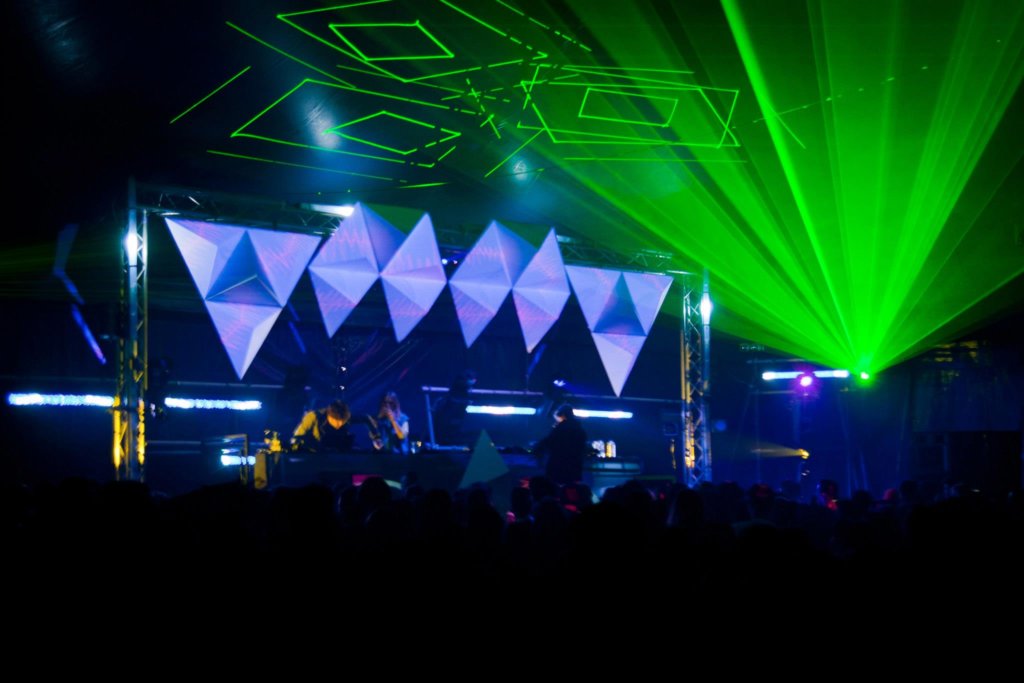 “The timing info of interest is the bpm and phase, and knowing these allows us to synchronise our LFOs and other animation controls to the same beat as the music.  For this I use a great freeware app called AudioBoxBaby which listens to an input from my soundcard and will send clock data to a selected midi device. In my case the midi just needs to go to another application – vvvv  , so I use LoopBe1  to route between the two without needing to leave the box.

The audio analysis is performed using custom FFT software written in vvvv.  I take the audio feed and apply a 512 band FFT to it.  These 512 bands (aka bins) are then resampled to a range more musically useful, and I’m left with 31 bands, which scale according to musical pitch, rather than frequency in Hz.  I’ve made a nice gui tool (see the screenshot below) which displays these bands and let me select the ones I want to use, which are then assigned to control parameters in the rest of the visual software.” 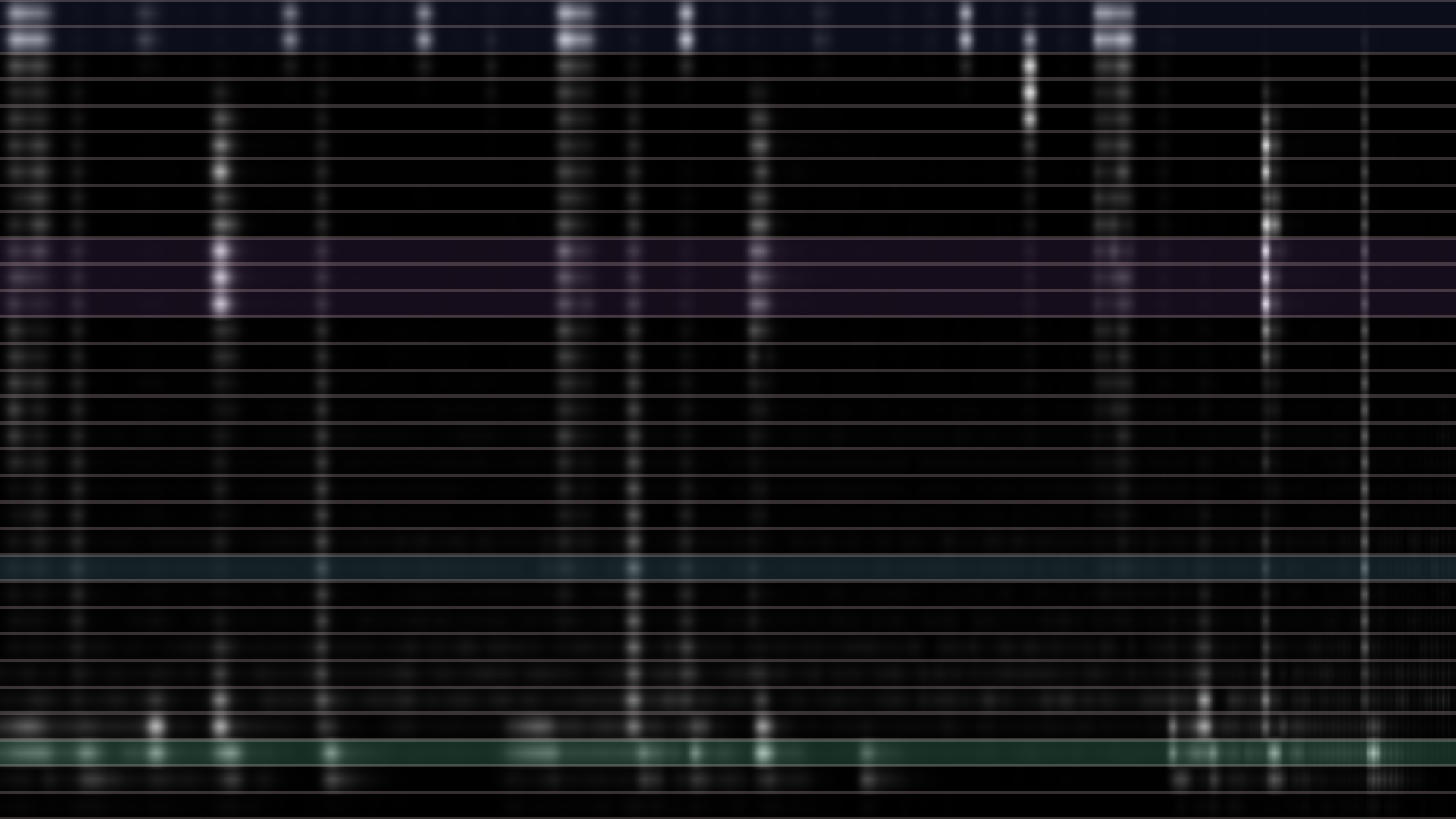