iPhone remains the top dog for smartphone music production, and this new model could drastically level up your social media video game. 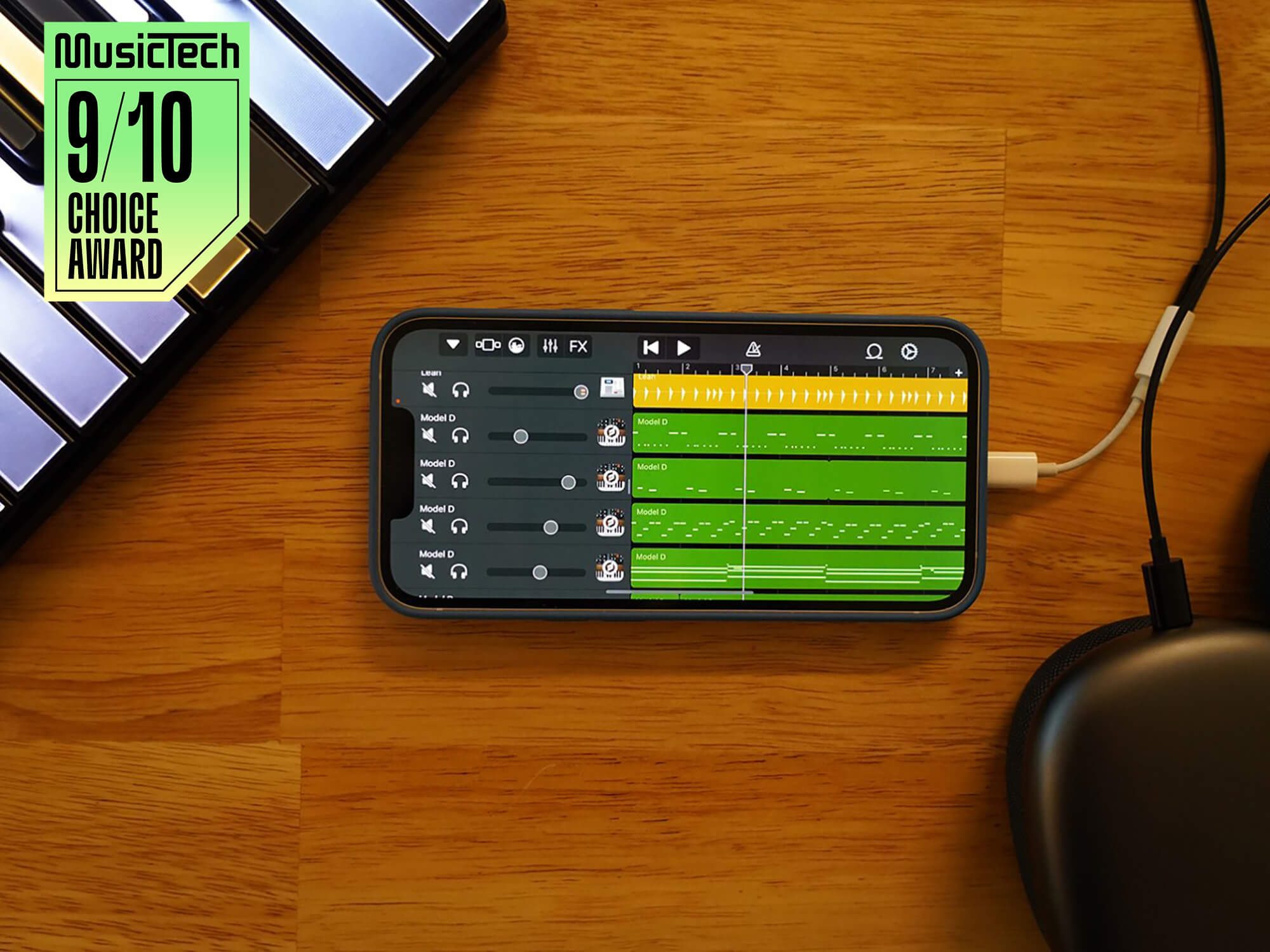 ⊕ Cinematic mode gives the look of a more expensive video camera
⊕ Low-light camera performance is impressive
⊕ Smoother graphics performance for gaming
⊕ Spatial Audio is fun if you’ve not yet tried it, but better for movies than music

The average smartphone user upgrades about every three years. That’s the norm. That makes the 2018 iPhone XR in our pocket absolutely average, even though it may still be a capable device for music-making and media consumption. Sure, it doesn’t let you do Portrait Mode (algorithmic depth-of-field processing) on objects (just people) which can hamper lush synthesizer photography. Still, the camera is perfectly adequate, and it can easily handle the rigours of mobile beat-making and the occasional recording of a musical idea.

So, what else can the iPhone 13 possibly add? Well, if you plan to shoot videos, then a fair amount. The new Cinematic Mode is a stunner. But if you already have a relatively up-to-date iPhone, you might want to hold on to your coins for now.

For review, we have the 512GB iPhone 13 in Silver ($1,099/£1,079). It feels refined, and the build is exacting – it’s essentially the same form as the iPhone 12. The only visible differences are the screen notch and the upgraded, diagonally positioned rear cameras.

As far as iPhone music production goes, in our experience, it’s rare to run out of processing power on an iPhone, especially if you’re using GarageBand with other apps closed. Even on an iPhone XR, you can pretty comfortably run 10 Moog Model D AUv3 plug-ins and a couple of Drummer tracks in GarageBand. That’s because GarageBand is so good at freezing tracks in the background. You’ll occasionally get an “optimising performance” pop-up, but that’s it. 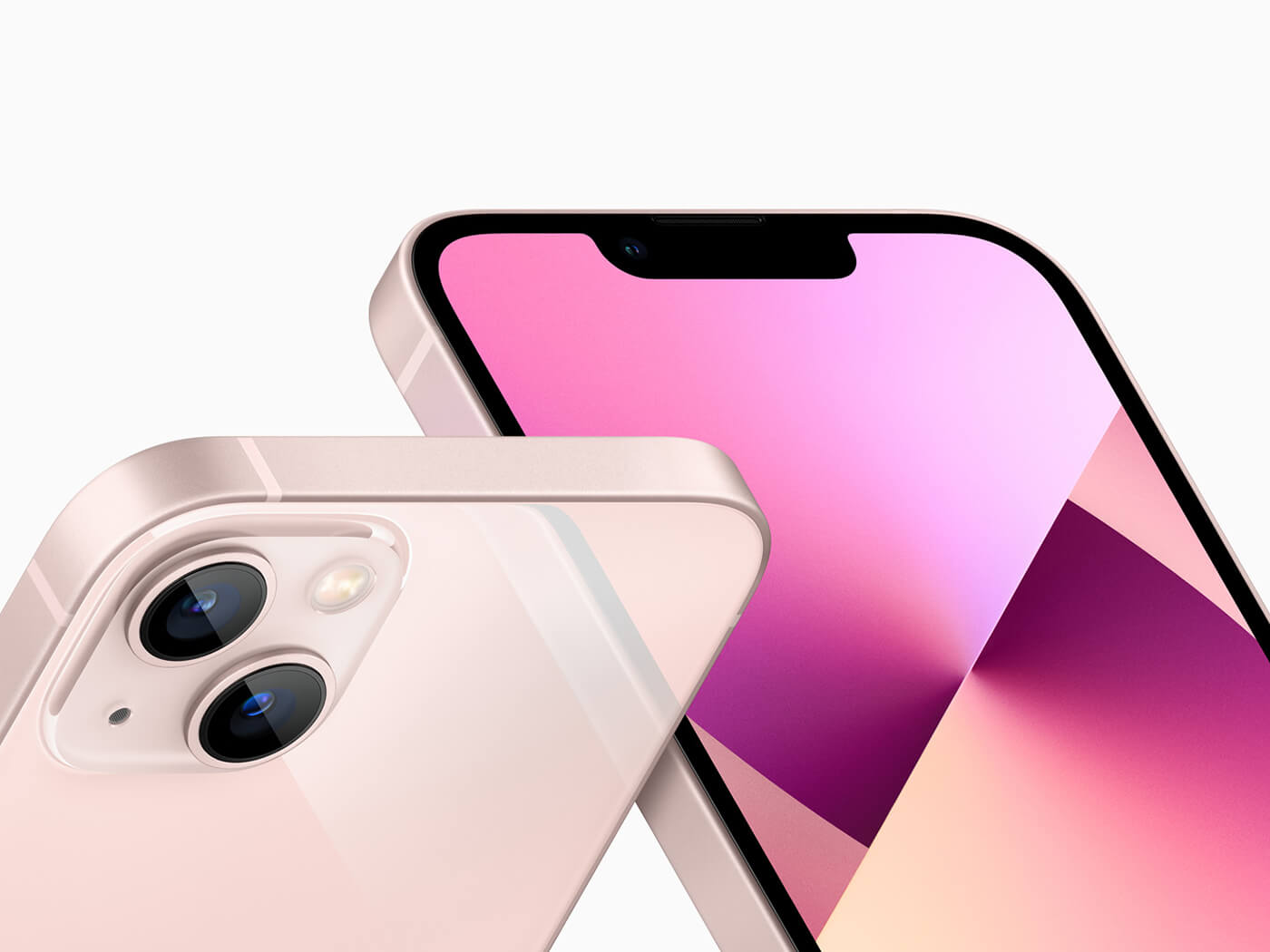 The difference with the iPhone 13 is that you don’t have to close other apps. And, while the iPhone 13’s faster processor necessitates less automatic track freezing in GarageBand, from a pure music production system performance standpoint, there isn’t a huge amount in it.

Even third-party apps such as BandLab work well on an older iPhone. Without breaking a sweat, you can run 16 tracks – a mixture of recorded audio, loops and virtual instruments – all with several built-in effects on an XR. So there’s no noticeable performance bump with the 13. However, if you’re coming from an older handset, you will almost certainly notice a significant difference.

Surely because the 13’s notch is smaller, cramped music-making apps like GarageBand are easier to use? Not really. The notch is just 20 per cent smaller, making little to no practical difference for phone-based producers. The first iPhone without a notch will be a must-have.

Bemoaning the lack of a headphone jack on an iPhone in 2021 is an exercise in utter futility. That ship sailed five years ago. But for smartphone music production, wired headphones are the only way to go, meaning contactless charging is prudent. The only issue is that contactless charging is painfully slow. The best way to fast-charge your iPhone is with a 20-watt fast charger. Because Apple is allegedly cutting down on waste, it didn’t include one with the iPhone 13. Plus, the charging cable in the box is USB-C, so it won’t work with most of your old iPhone chargers.

Beyond music-making, the place we feel the additional processing power most is with games. 3D rendering is super smooth in Genshin Impact, What Remains of Edith Finch and Playdead’s Inside.

And for music listening, if you have AirPods Pro or AirPods Max, the head-tracking Spatial Audio integration is intriguing. Since launching Dolby Atmos support, Apple Music has become the dominant platform for spatial sound. For our money, though, head-tracking is best deployed on movies rather than music. If you want to hear a peculiar example, bring up Stay by The Kid LAROI and Justin Bieber. Counterintuitively, the voice follows your head movements. Thankfully, you can turn this feature off in Accessibility settings. 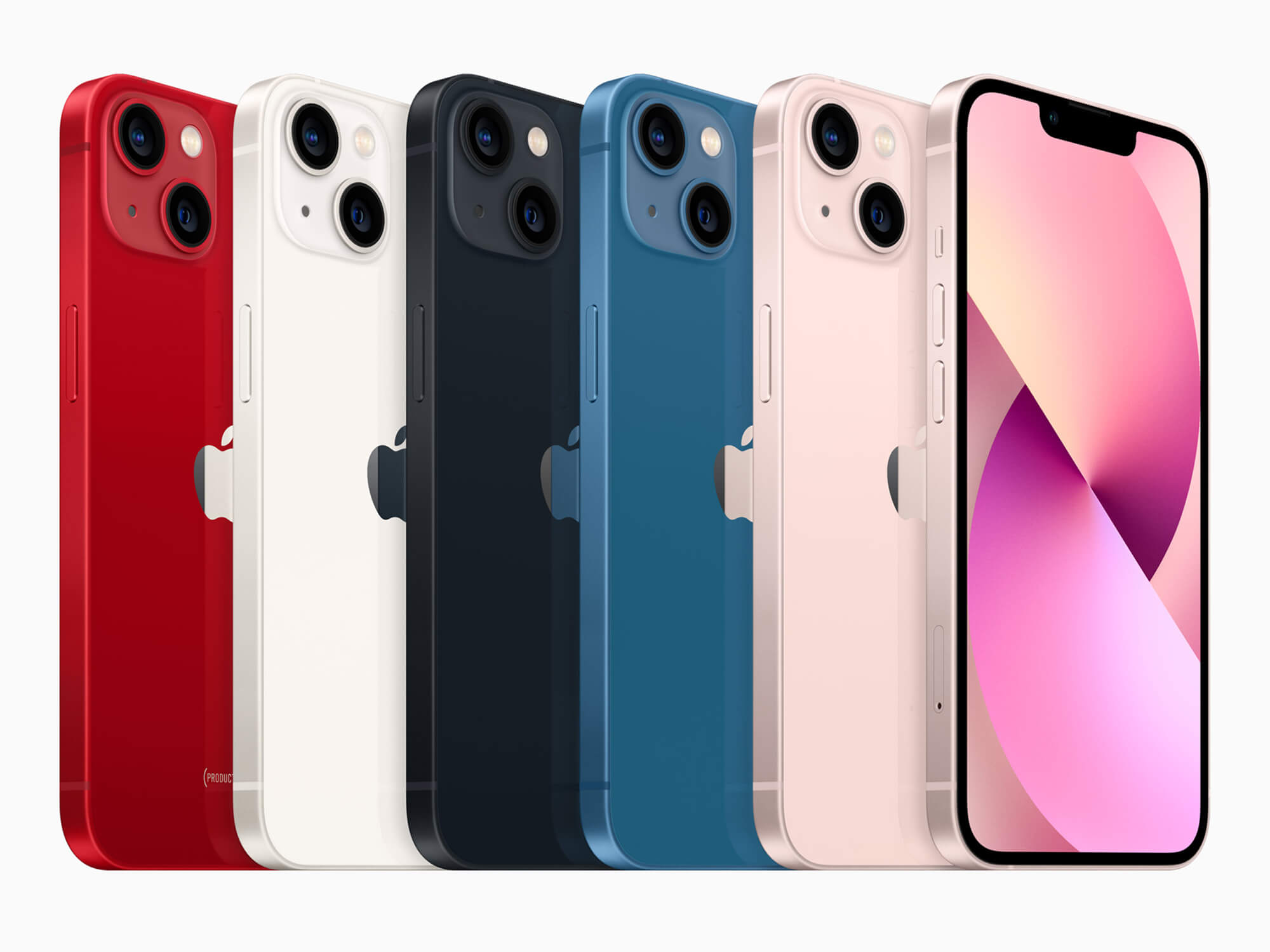 But isn’t the iPhone all about the new cameras?

Well, yes. The new camera tech is incredibly smart. Cinematic mode is the one feature truly worth writing home about. It uses machine learning to approximate the depth-of-field effect provided by an expensive video camera. Its ability to detect faces (with front and rear cameras), tastefully blurring the rest of the shot, is pretty mind-blowing. It performs best when held still, but subject tracking with live blurring still looks heaps better than the regular ‘everything-in-focus’ video mode.

Sure, it’s never going to look quite as good as a dedicated camera with eye-detecting autofocus, but this fits in your pocket. As the saying goes: “the best camera is the one you have with you”. If you’re shooting instructional in-studio videos for TikTok or just recording a live performance, this will give a close approximation of an expensive camera look.

Most impressively, with Cinematic mode, you can shift the focal point after shooting. When you first do it – only currently possible on the phone itself – it feels like witchcraft. Need to focus on your DAW screen one moment, your face the next, then onto the synth you’re playing? It does all that with no hassles, and with that high-end polish.

Cinematic mode’s depth-of-field processing is not perfect, though. The ML algorithm sometimes struggles with outlining messy hair, glasses and some objects. In our tests, it couldn’t figure out whether the tuning pegs on a bass guitar should be in or out of focus, creating a glitchy effect that breaks the illusion.

But it’s an impressive first step for the technology and, in a couple of generations, it could make buying a dedicated DSLR camera redundant for most of us. After shooting, you can also specify the virtual f-stop – lower for more background blur, higher for less.

Low-light performance is crucial in studios. This is handled well thanks to Dolby Vision HDR video (supported since the iPhone 11 Pro/iPhone 12), even if the results are a little surreal and a bit of image noise creeps in.

Also useful for shooting video on the iPhone 13 is the stability afforded by the sensor-shift technology, previously only available on the iPhone 12 Pro Max. Seeing this top-end feature coming to the regular line is welcome (it irons out little shakes from shooting handheld) – but makes the most substantive difference if you’re shooting while walking. So, it’s effective for studio tours, but not if you plan to pump your fist, phone in hand, to your latest beat.

With front- and rear-facing cameras, you can shoot up to 60 FPS in 1080 HD or 4K. The latter makes editing with a single camera angle far easier, giving you the resolution to permit zoom cuts. However, this hasn’t been upgraded dramatically since the iPhone 11 Pro Max. The only downside for the pro video crowd is that in the standard iPhone 13, you don’t get the option to record using the high-quality ProRes codec – it’s reserved for the Pro and Pro Max models. 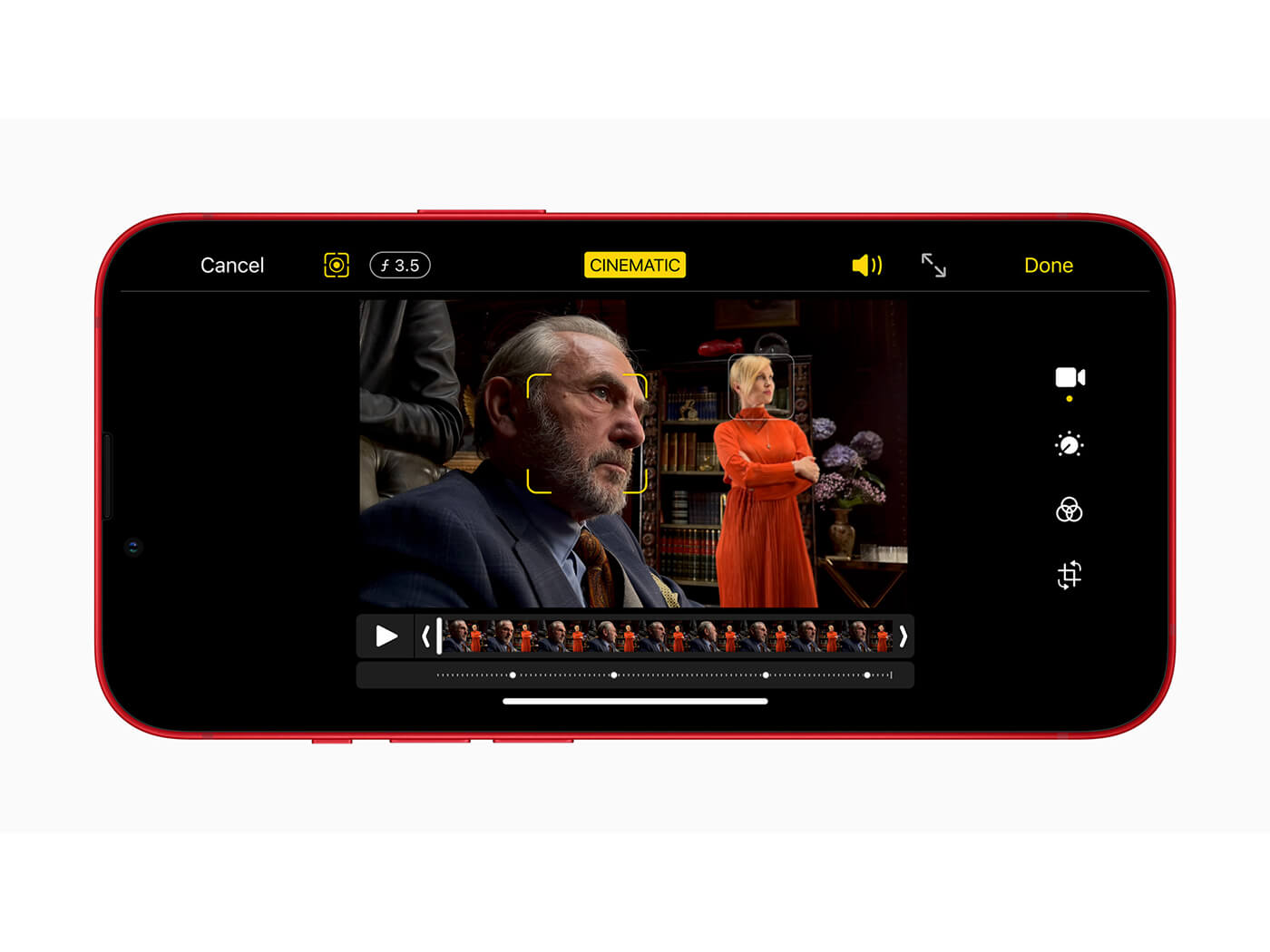 If you shoot a lot of videos and haven’t upgraded for a few years, then the iPhone 13 is a handsome prospect, especially if your contract hides the cost in your monthly bills.

With its low-latency performance (albeit only with wired headphones), and its vast ecosystem of AUv3 plug-ins and music apps, iOS keeps its title as the best smartphone platform for music-making. The iPhone 13 is a fantastic handset. If you’re determined to upgrade, you’ll be delighted with it, notwithstanding the lack of a 20-watt fast charger.

That said, if you’re looking for even more pro features such as a macro photography mode (for extreme gear close-ups), ProRes video codecs that take colour grading a little better, and demonstrably longer battery life, then the 13 Pro warrants investigation. If you’re a mobile music maker with a handset that’s under three years old, the performance improvements are modest and don’t, for our money, justify an immediate upgrade. And, if the 14 loses the screen notch, you’ll be pleased you waited.