Aphex, along with API, was among the first manufacturer to take advantage of the 500-Series format with its versions of the 602 Aphex Aural Exciter, the EQF-1 and EQF-2, back in the early 80s. Now that the format has achieved such popularity, it’s no surprise to see the company back with a range of new modules, as well as an upcoming USB-equipped rack.

Preamps
Three of the new modules shipped to us by Aphex are mic preamps, comprising the two-channel Dual RPA valve preamp and two mono solid-state preamps with different transformer options, the J Pre and A Pre.

The Dual RPA takes a unique, patented approach to valve amplification inspired by the Aphex Channel and 207D preamps. This technology, which the company has dubbed Reflective Plate Amplification, is actually a hybrid design employing a discrete, transformerless solid-state front end feeding a 12AT7 valve output stage running on low-voltage power rails. A single 12AT7 valve amplifies both channels at fixed gain, with a single triode stage for each. The Dual RPA also features Aphex’s unique Mic Limiter technology, which limits the signal before the preamp stage, ensuring that the preamp isn’t overdriven by high-transient inputs.

The A Pre and J Pre are largely similar – the A Pre using a custom Cinemag input transformer, the J Pre using a Jensen JT-11K8 input transformer. Both have a Jensen JT-11DL output transformer. Like the Dual RPA, the J Pre also utilises Aphex’s Mic Limiter at the front to limit the incoming signal before the preamp stage. Aphex also claims there are other differences in the circuitry between the A Pre and J Pre, designed to give a slightly different flavour to each.

We began testing the preamps on vocals, using a Shure SM58, and were impressed with the response of each preamp. The Dual RPA brought out the proximity effect quite strongly so we engaged the 75Hz high-pass filter, which really cleaned up the signal, revealing a smooth, rich sound that was strong in the lower-mids and exhibited none of the brittle harshness usually associated with low-voltage valve designs. However, neither did it have the silky warmth of more expensive valve designs. The A Pre performed admirably on vocals: everything was clear and the low end still benefited from the engaging of the high-pass filter, but not as noticeably as the Dual RPA. The low-mids seemed a little less pronounced, too, with a slight nasal quality around 2kHz – a common complaint of ours when working with the SM58.

Of the three, though, it was the J Pre that we liked most. It had a similar quality to the A Pre but with slightly more polish. On softer vocalists the Dual RPA might have edged it over the

J Pre, but on this specific male voice the J Pre was a clear winner.
Switching to a Sontronics STC-1 with an omni capsule and an acoustic guitar we again opted for the J Pre. The A Pre arguably picked out a little more detail from the strings, while the Dual RPA again brought subtle colouration that would suit some recordings, but the J Pre had the focus in all the right places. The low-mids were big but not boomy and the top end was smooth – perfect for strummed folk guitar. The A Pre, on the other hand, may be a better choice for capturing a more detailed picked performance.

Finally, we tested the three preamps as instrument inputs. Each has a 1/4-inch Hi-Z input on the front, so we plugged in a bass guitar and drove the units a little harder to see what sounds we could get. Again, the J Pre was our favourite, providing a strong, deep punch with a smooth midrange that could be easily EQ’ed to provide a range of great bass sounds. The Dual RPA had less low end than the J Pre but a stronger, more pushed midrange, which would really shine in mixes where the kick was carrying a lot of the sub-frequency information. However, we felt that the top end of the Dual RPA was a little brittle compared to the other two, and we’d probably want to filter this a little stronger.

EQ
The EQF 500 is a three-band semi-parametric analogue EQ with high- and low-band filters. It’s based on the original EQF 2 module from 1982 but with modern components (including a Jensen JT-11DL output transformer) and an improved layout to make using EQ easier than ever. The high and low bands of the EQ default to shelving-style EQ, but can be switched to peaking EQ. There is no variable Q; Q is fixed at one octave at maximum boost and the filters are fixed at 12dB/octave.

The filters and EQ can be bypassed separately, which is a useful touch, enabling you to experiment with your settings and quickly bypass either the filters or EQ without affecting the other.

The EQF 500 is a great tool – the filters are smooth and incredibly useful when tracking, especially when combining the EQF 500 with a compressor like the Comp 500 as they enable you to roll off the frequencies you don’t want before the mix hits the compressor, ensuring unwanted frequencies don’t trigger compression.

The semi-parametric bands are simple and effective and there’s no harshness in any of the bands when boosting. However, without any control over the Q it is difficult to notch-out specific problem frequencies. Instead, the EQF should be thought of as more of a general tone-shaper while tracking, leaving more specific EQ’ing to the mix.

Tracking a vocal through the J Pre into the EQF we were able to tighten up the performance, removing low-end rumble from the bottom with the high-pass filter, bringing out the clarity with a high-end shelf, and adding a little more weight with the low frequency set to peaking rather than shelving.

On acoustic guitar we applied both filters to top-and-tail the sound into the mix, and again used the low-frequency bands to bring out weight in the bottom end. The mids were then cut around 2kHz to leave more room for the vocal.

Dialling in the EQ curve you want is quick and easy, and while an extra mid band and better Q control would prove useful in some cases, for most tracking we prefer to go with only a small amount of EQ anyway, leaving most of the tonal shaping until later in the mix.

Optical compressors are versatile units, and it’s great to see one available in the 500-Series format at this price. On vocals, with a slow release, the Comp 500 can help smooth out a performance without it sounding overly compressed; at faster settings it can be used to handle the dynamics a little better without sounding too spiky, but we found this also brought out some of the unwanted vocal sounds that were kept low in the mix at slower release settings.

Unlike some other optical units we’ve used, the Comp 500 doesn’t impose a strong sound of its own, and there’s only a small amount of top-end roll-off. The unit also comes with a stereo link switch that will make it possible to use two Comp 500s on your drums or mix buss.

Exciter
The EXBB 500 combines the latest iteration of Aphex Aural Exciter and Big Bottom technologies in a single mono 500-Series module. The Aural Exciter enhances the high end of the signal while the Big Bottom does a similar trick in the low end. Usefully, it responds dynamically, enhancing the low end more as the level drops and backing off when the input rises, ensuring that the bottom end remains consistent.

The Big Bottom is great for adding depth to a kick or bass instrument, especially if the recording lacks in this dimension. It can be a useful alternative to the NS-10 sub kick mic trick. We also enjoyed using it on some sampled horn parts we were mixing. The Big Bottom brought out a growl in the samples that made them more realistic than the samples on their own.

By contrast, the Aural Exciter brought out mostly noise and bleed from other instruments on our kick channel, but placed on the vocal it helped to raise the air around the voice, enhancing not only the clarity but the sense of space. It would be very easy to overuse a product like this – apply it on too many channels and any benefit is lost as the tracks once more mask each other. But when used sparingly on vocal or a lead guitar it can be sensational.

Each of these modules has its own uses and merits, but it’s together that they become most useful. Link one or other of the preamps with the EQ, compressor and EXBB and you have an incredibly versatile channel strip. The EXBB, though, is unique, and we can see plenty of engineers wanting to incorporate it in their racks 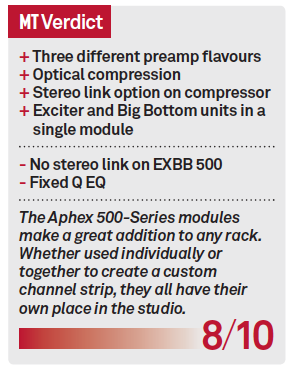