Dinky’s Taiko from ALM/Busy Circuits has a reputation for being a quirky drum module, but how does that fit into an existing Eurorack? Dave Gale patches up a trigger or two to find out… Details Price £199 Contact ALM/Busy Circuits, info@busycircuits.com, Web: www.busycircuits.com Surely, the whole point of owning a Eurorack system is to allow […] 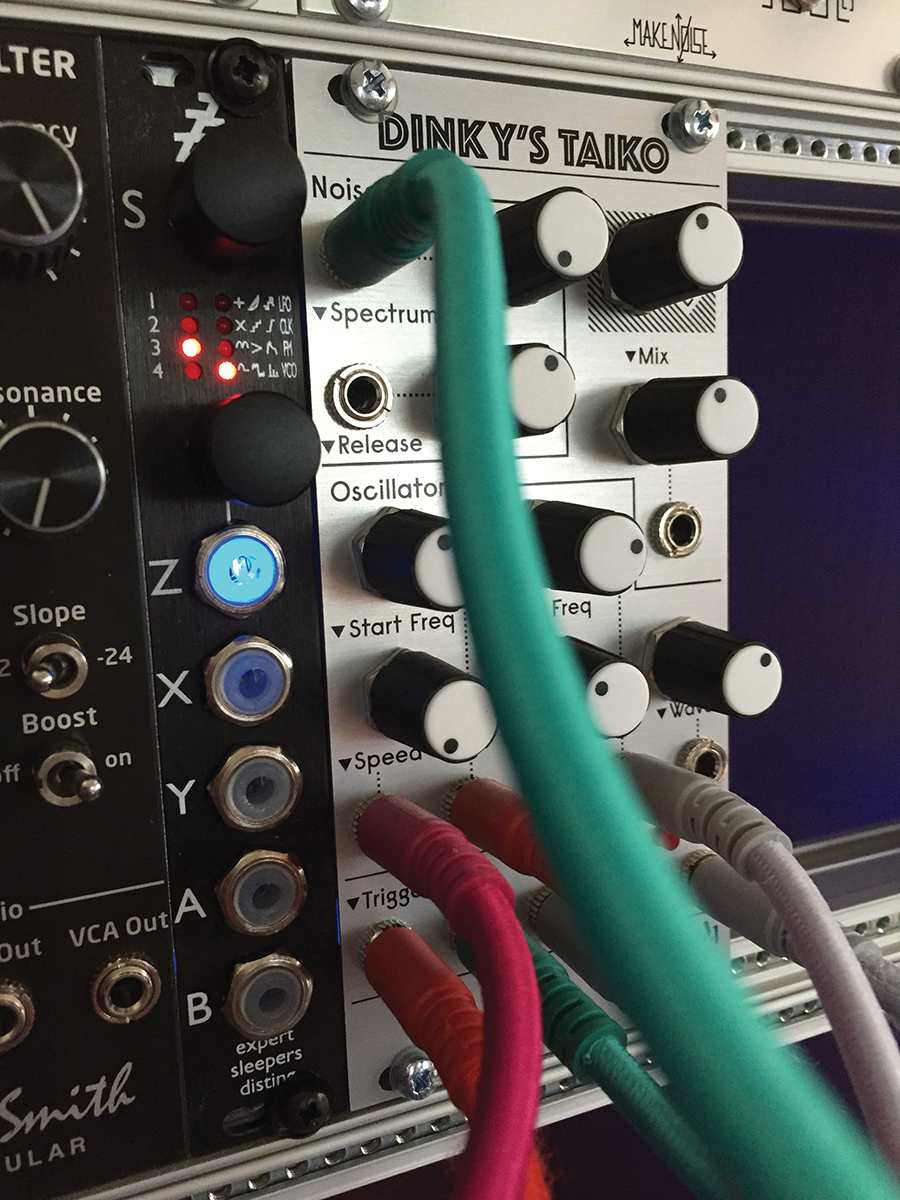 Dinky’s Taiko from ALM/Busy Circuits has a reputation for being a quirky drum module, but how does that fit into an existing Eurorack? Dave Gale patches up a trigger or two to find out… 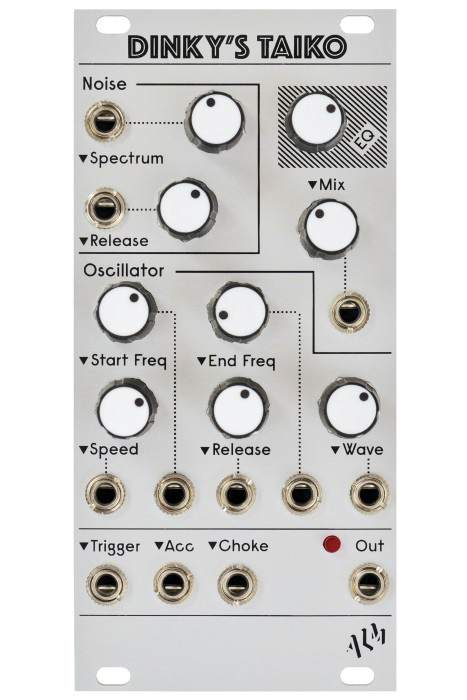 Surely, the whole point of owning a Eurorack system is to allow the synthesist the flexibility to do things that it would be difficult to do elsewhere, yet there seem to be three paths available when it comes to electronic drums.

You could choose to create drum sounds with existing oscillators and filters, which is a very creative approach, or buy a module which might imitate a classic, such as an 808 or 909. But the final option might be to consider a module which offers the basics and allows the user to build a drum sound, but go far beyond what might be considered the standard, and that is where Dinky’s Taiko enters the arena.

A taiko is a type of drum, principally from Japan, but as to the identity of Dinky, well that remains a trade secret, according to Matthew Allum, the creative force behind ALM/Busy Circuits, and as with so many Eurorack modules, the mention of taiko is nothing more than a hint as to the purpose of the module – and that’s where the association ends.

The Dinky lends itself immediately to snare-type sounds, thanks to the time-honoured structure that would normally be used to create a timbre of this kind. The architecture consists of one part Digital Noise Generator, and one part Digital Wavetable Oscillator, which boasts 24 waveforms.

Worth pointing out here that the module is 12-bit based, making it nice and crunchy, and especially perfect for so many production duties these days, where bitcrushed drums have become so appealing. The two components, noise and oscillator, are blended together via a mix pot, which in turns leads to an analogue output stage, offering a tilt-based EQ.

The noise section offers plenty of variety, with a wide spectrum from bright through to ‘early computer-game explosion’-style noises, all with control over the release phase via a dedicated pot in the noise section.

The oscillator section offers more variety in timbre. Traditionally, in an electronic snare sound, a sine- or triangle-based oscillator would be employed to provide the ‘tuned’ centre of the drum sound. This can be done here, if desired, but alongside this basic concept resides so much more, as there are plenty of complex wavetable tones to work with.

In addition, the oscillator tone can be detuned, via the Start and End frequency pots. This allows for the tone pitch to move from the assigned starting pitch, to the assigned end pitch, but at a speed dictated by the Speed pot. Crank this pot too far and the cycle of pitch movement swings back around for further passes, meaning that all sorts of overtones immediately become apparent, offering similar sonic characteristics to FM synthesis. There is also another Release pot so the decay tails of the two sections can be set independently.

Middle Line
Digital Wavetable Oscillator, offering huge amounts of control and versatility. Where will it Start and End?

Above: All patched in a ready to go. Plenty of CV-input options available on this Dinky module

On first power-up, I managed to obtain all manner of traditional snare sounds, many with nods to the classics; but as I started to vary the Wavetable Oscillator, the Dinky started to take on a life of its own. Single strikes, with all sorts of pitched movement, came falling out of the unit with no effort, thus making this module immediately useable in more traditional settings.However, the ‘bit of an animal’ quotient definitely enters the room when you start to add CV control to some of the inputs.

Taking some modulating CVs from a number of sources in my rack, I soon found I had placed every parameter under CV control, and it sounded gloriously chaotic! I would argue that this is the whole point of a module of this kind; the chaos that can ensue, admittedly requiring some attenuation in part, is something to behold and a real strength for the Dinky.

This isn’t the end of the story though, as two extra trigger inputs (additional to the strike trigger) allow for accent and choke, the latter being particularly useful, as the incoming trigger signal immediately chokes the timbre. Perfect for hi-hat-type duties and more.

Important to point out here that I have been playing down the ‘other’ side of the Dinky. It should absolutely NOT be considered solely a snare-drum based module. Thanks to the wealth of control, both fixed and via CV, it’s capable of far more than just snare strokes. Crunchy bass drums, white-noise hats, and numerous otherworldly tones are all here, and that’s the whole point of a module of this kind.

If you’re looking for more basic drum tones, Tiptop do a very nice series of 808- and 909- style modules which are truly excellent, but they offer very little functionality and control compared to Dinky’s Taiko. The Mutant Snare from Hexinverter takes the 808-style snare to the next level, with some nice additional touches, and great layers of control.

If you want something to generate some classic snare sounds, along with the versatility to make drums sounds that are unique and ‘out there’, then this should be on your try-out list. It’s great sounding, and more importantly, has the ability to make sounds which you might find difficult to replicate on a Eurorack without several modules to do the same job, so it’s ideal for smaller systems. However, it would absolutely not be out of place in a larger Eurorack.

It’s difficult to imagine anyone in search of a good drum module who wouldn’t be drawn in by Dinky’s Taiko. It’s versatile and sounds superb, thanks to the crunchiness of the 12-bit architecture. It’s not surprising that this module has so many fans, famous and otherwise 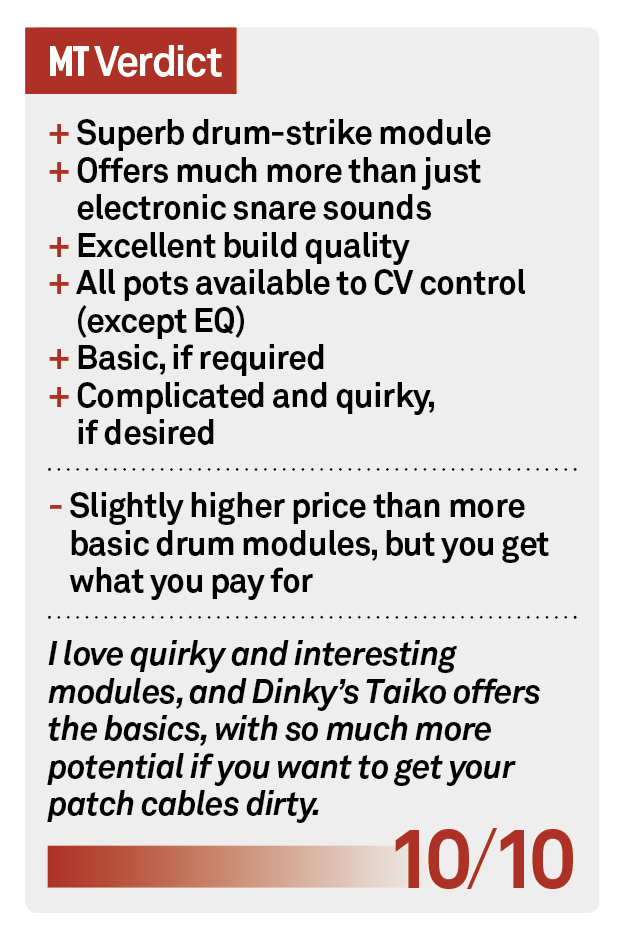