With more people peering from out of their computers into the world of hardware for music production, the studio mixer is making a comeback in all sorts of shapes and sizes. Andy Jones looks at two models in the ZED series from Allen & Heath, which appeal to two very different groups of musicians…   […] 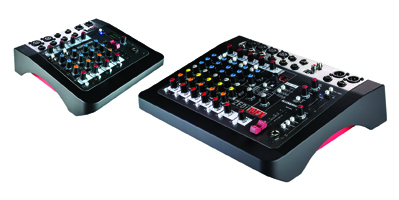 With more people peering from out of their computers into the world of hardware for music production, the studio mixer is making a comeback in all sorts of shapes and sizes. Andy Jones looks at two models in the ZED series from Allen & Heath, which appeal to two very different groups of musicians… 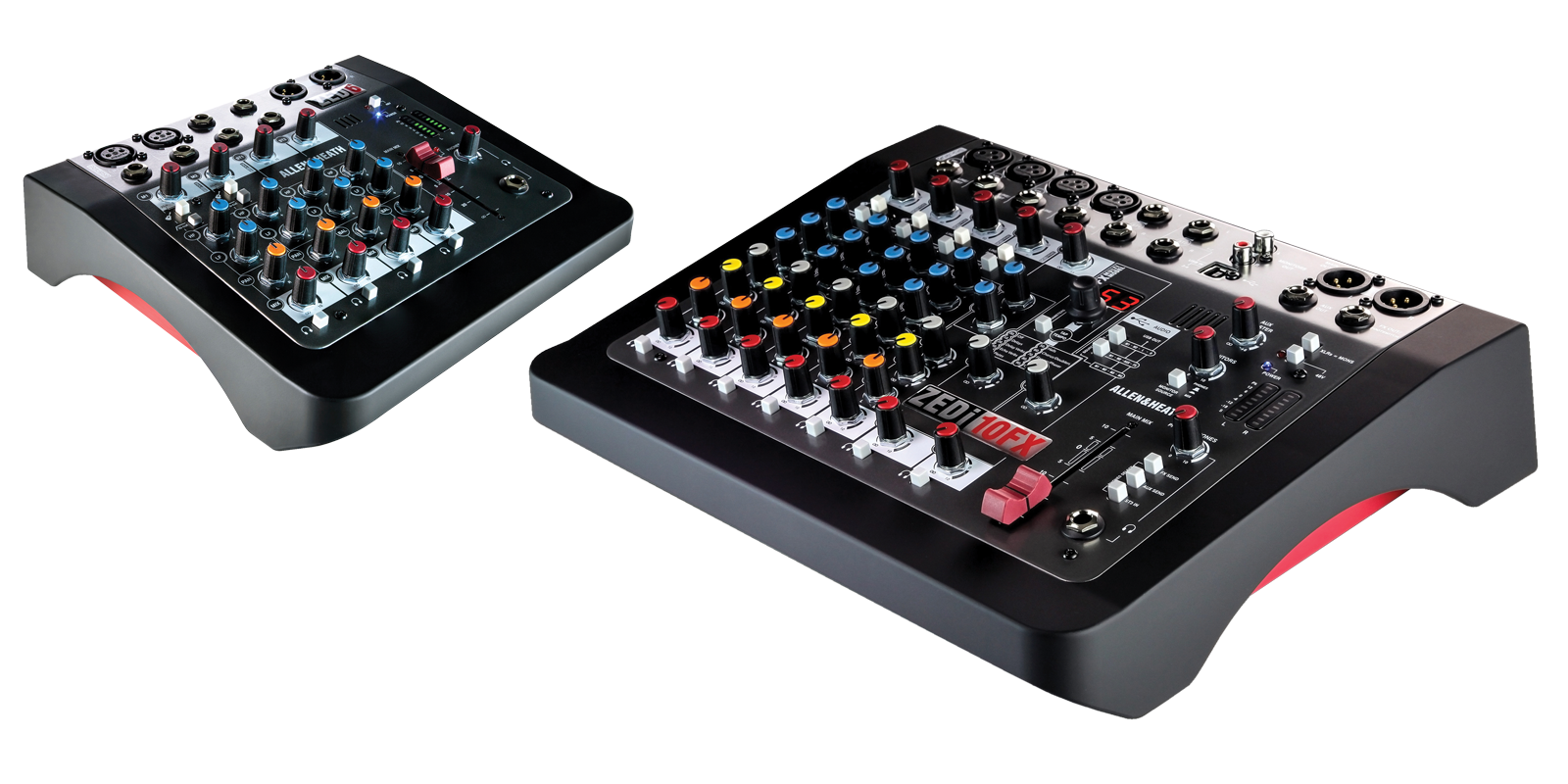 Every month, I seem to be writing about hardware making a comeback within the recording studio. But, to be clear here, I’m not talking about a complete reversal of the ‘computer only’ route of music production in the early noughties and a return to the 70s, where tape and valves ruled.

No, all I’m talking about is a shift from the computer acting as the conduit for everything to set-ups where the workload and flow is shared and, more importantly, the emphasis is moved away from the Mac or PC.

So, rather than the computer providing all of the sounds and outboard processing that it once did, analogue components are being brought back into the mix – still more highly regarded than their digital or virtual counterparts. And with more analogue gear, more hardware mixing is needed: hence, a resurgence in the humble hardware mixer.

Yet it’s the small format mixer that we’re hearing more about than any other, and this is the mixer of choice for a few reasons. The first is the prevalence of YouTube videographers, who need to mix simple soundtracks; then there’s the popularity of the guitarist/singer-songwriter (he or she needs a mic and a guitar, and that is it); and last but not least, there is the ‘ex totally-in-the-box producer’, who is just starting to experiment with external gear, so only requires a few extra channels of input.

This might be the person who was using Reason or Live for everything, but who has been tempted by the addition of an analogue synth or expensive mic pre for better recording, so requires additional (but not many) connections.

Either way, the small mixer is king. And here are two examples from the ZED series from Allen & Heath, masters of mixers of all sizes. 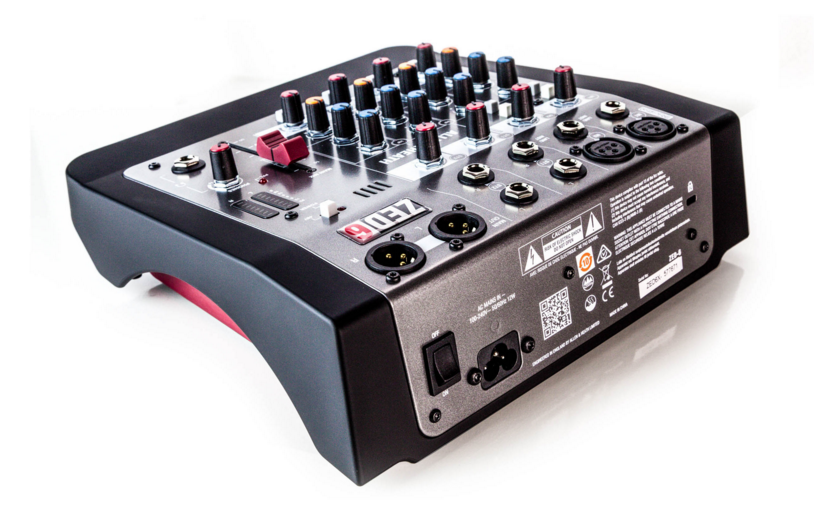 The Range
The ZED series has been around for a while, but has recently been added to with several models, including the ZED-6 (on test here). Others have had the letter ‘i’ added, which could denote iOS support but actually stands for interface. We have very much what you might call the top and bottom models in the range on test here. The larger ZEDi-10FX acts as that interface via USB and comes with onboard effects.

But we’ll kick things off with the ZED-6. This is a sturdy little unit – and it really does feel robust, especially given its diminutive size – that sits well on your desktop, with a small footprint and six inputs to choose from. You get two line and instrument inputs with DI (so no extra boxes are needed to match levels); and two stereo inputs.

The ZED series features ‘the new GSPre boutique preamp design’ which is lifted from A&H’s GS-R24 console and boasts a low noise floor and promises analogue warmth. Both were evident in my tests, with analogue synths running through the mixer with little noise and signals well and truly buffed and beefed up with the onboard LF dial.

A Mid control would have been nice, but I’m not complaining too much in this department, as there’s enough movement in the LF and HF controls to cater for subtle and more radical sound-character changes. 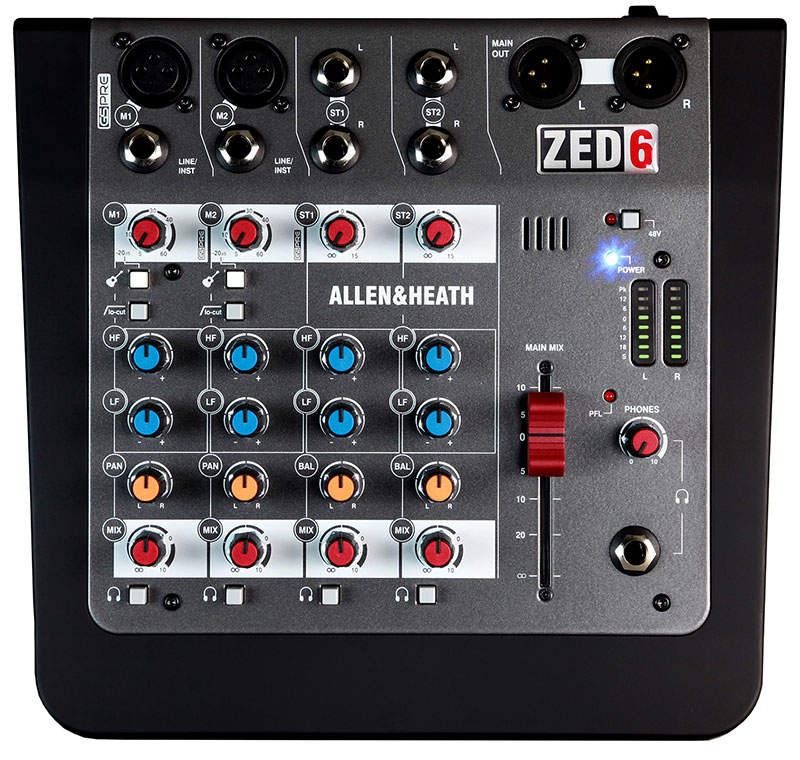 Asking for faders in a mixer this size (and for a street price in two figures) seems a little churlish, too, especially given the rotaries are easy to use and with enough space to breathe.

Overall, that street price makes this mixer a great buy. It does a job – and, okay, not much more – but it does it well and it’s a job that is increasingly demanded from guitarists and vocalists (not to mention bloggers). Consequently, I can see A&H shifting the ZED-6 in great quantities.

ZEDi-10FX
And so to the ZEDi-10FX. On paper, it simply looks like a bigger version of the 6, but there are three notable additions: that iOS support, those additional effects and its USB interfacing. The latter is pretty much plug ’n’ play.

Both Live and Logic picked the unit up straight away and I was quickly up and running, routing my synths into both DAWs via channels 3 and 4 of the mixer. One thing worth noting is that plugging a signal into the stereo ST2s does cut the USB signal out, so try to avoid that trap (that I fell in to!).

Again, the sound is very clean, no noise, and the 10 benefits from a midrange EQ to help bolster or shape your vocal-frequency areas. More rotaries does mean less space on the front panel; you might find controlling these a little more finnicky. The routing options and other features on the 10 are surprisingly abundant. 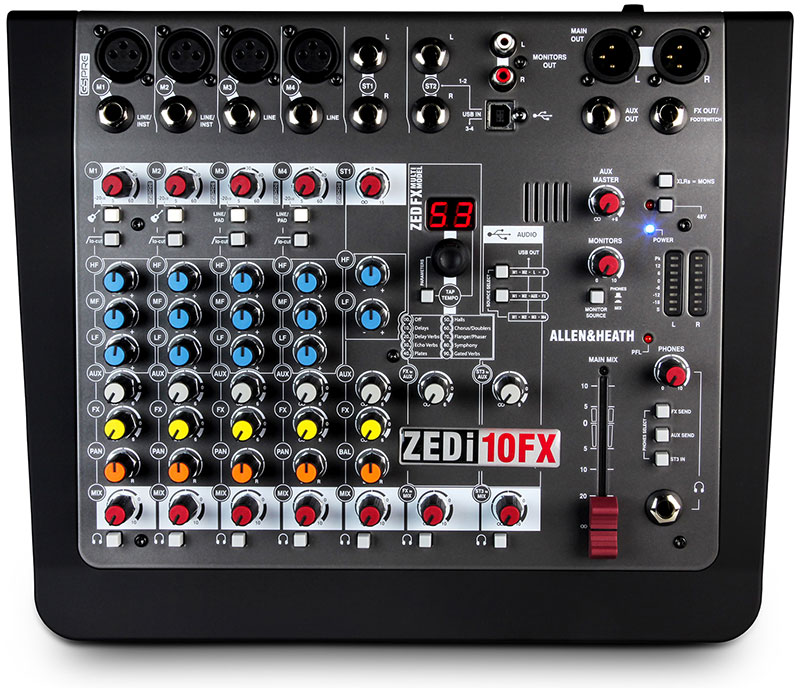 As well as pre-fade listens on each channel (also on the 6), there’s a USB-out selector to choose which four sources are sent to the Out (combinations of mono, stereo, FX and Aux to choose from). There’s a useful Aux Out and Footswitch connector and three choices to route to the phones output (FX send, Aux send or ST3), otherwise you just hear the main mix.

For use with iOS, you’ll need a camera-connection kit (pretty standard these days), but as an interface, the 10 is pretty adept and as plug ’n’ play as you could ask for.

Alternatives
The small-mixer market is, as I’ve said, huge! I looked at the Mackie Mix series last year, which offers incredibly cheap analogue mixing, also in compact and sturdy boxes, but with no USB interfacing (although there are other Mackie models that do).

Better still is the AG mixer range from Yamaha. While the mixers in it are both smaller in terms of spec, both also act as USB interfaces. The six-channel AG06 is only marginally more expensive than the smaller A&H one on test here, and is a great alternative

The FX
So that’s the interfacing and the extra features of the 10 covered – now onto the effects that make up the FX part of its name. Levels here are controlled by the yellow rotaries on each channel and you can also adjust the timing of the delays with the Tap Tempo button.

Usefully, holding this allows you to access the chosen effects’ main parameter, which you can then adjust with the main FX Select rotary.

Effects are generally delays, reverbs and chorus/modulation effects. They are surprisingly clean and usable, offering some extra flexibility when recording instruments and adding another option to the list of the 10’s uses, as the effects certainly bolster its features when used as a recording mixer for bands.

Conclusion
They might be in the same range, look the same and have the same ‘feel’ – but the ZED-6 and ZEDi-10FX mixers serve very different purposes and work on very different levels. The 6 is the ideal no-nonsense, small mixer for a single musician with a guitar and mic, or a podcaster with a mic and an opinion to spout. It does the job well with no fuss and for very little outlay, and on that score and for the cash, I’d find it hard not to recommend it. 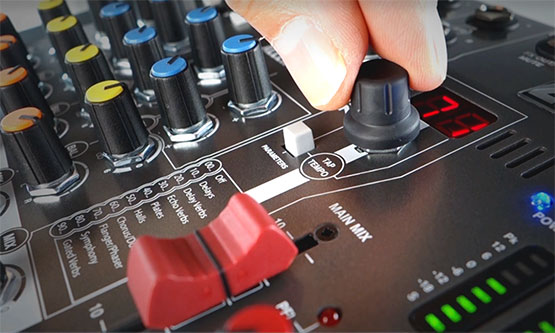 I’d say the ZEDi-10FX works well for a very different and larger audience. It operates in a very straightforward way as a simple but well-featured interface for both iOS and computer. As such, it allows DAW owners into an outside world full of wonder and exotic boxes, but it can also act as a recording mixer for bands, especially with those onboard effects.

On an even simpler level, you could just use it as a summing mixer for playing live or recording, so there are lots of potential customers out there. It may cost that bit more than the 6, but this extra flexibility will certainly win it a lot of friends. 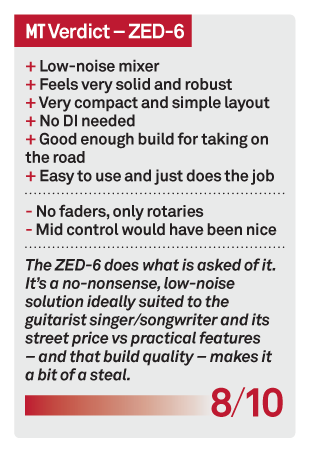 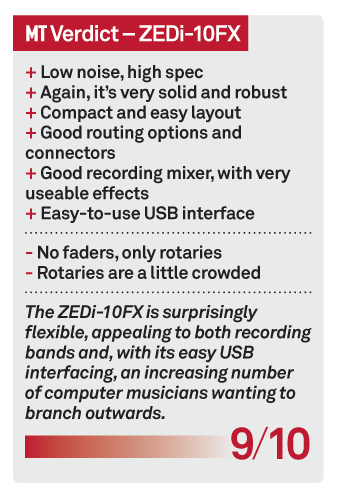