This new A&H mixer, the Qu-SB, is designed primarily for bands and live use but can easily solve many studio problems, too, says Andy Jones… Details Kit QuSB Manufacturer Allen & Heath Price £849 Distributor Audio Technica Contact Audio Technica – 0113 277 1441 Web www.allen-heath.com Hardware mixers are back and they’re better than ever! And, well, a […] 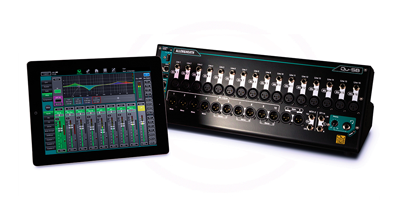 This new A&H mixer, the Qu-SB, is designed primarily for bands and live use but can easily solve many studio problems, too, says Andy Jones… 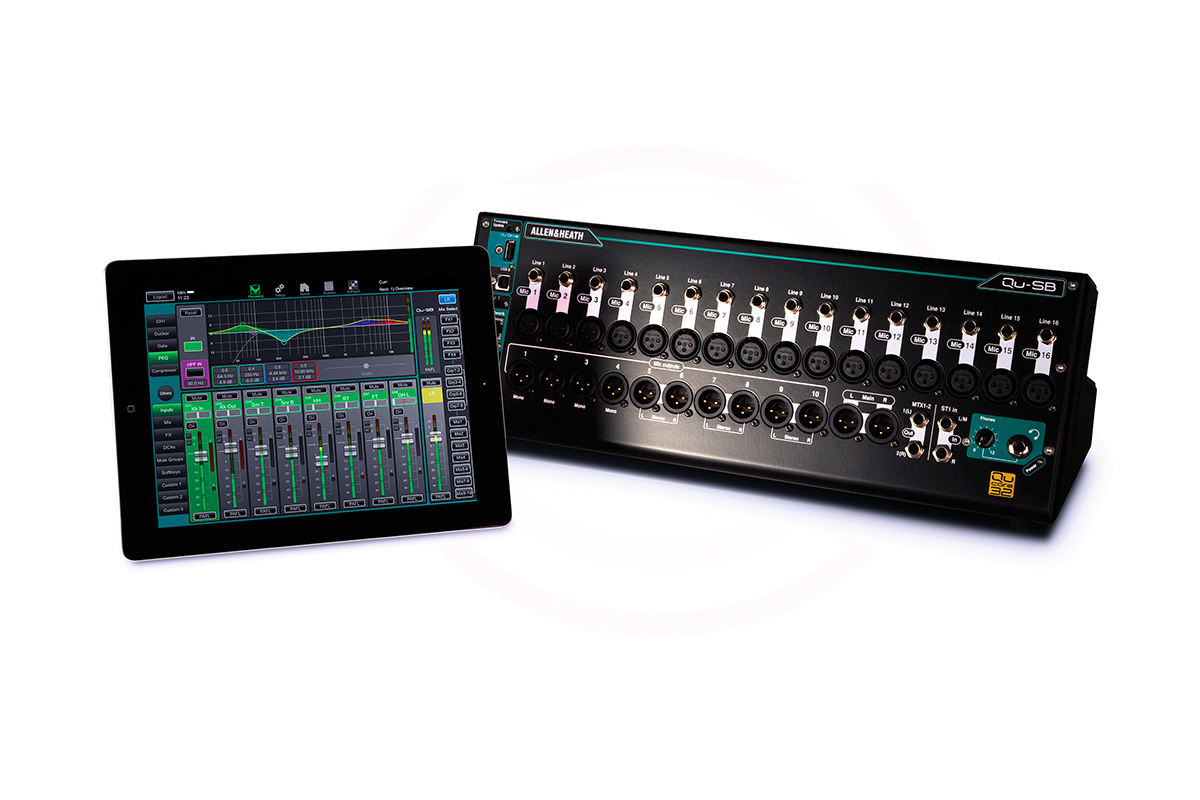 Hardware mixers are back and they’re better than ever! And, well, a little complicated to explain. It must be said, there are simply so many variations of analogue, digital, interface-based and tablet/computer-paired mixers that the market has got a little tough to explain in one intro paragraph. A year ago, I looked at my first of this latter category: the Soundcraft Ui16. This had all of the hardware connections in one robust box and all of the software mixing handled with a simple web connection via any computer. It was easy, practical and built like a tank.

The reason I mention that mixer is that this new Allen & Heath Qu-SB shares some of its looks, build features, and practical functions. It’s a mixer that is aimed squarely at the live and band recording market, yet is built so cleverly and pairs so beautifully with an iPad, you’ll be reaching for it to record and pair with your studio DAW, too.

It’s supposed to be the best of mixing on screen, the best of interfacing and recording (with all the connection gubbins placed out of the way on your desktop or in your rack), and the best of modern production with it all controlled by touch. Let’s find out more…

So the box is sturdy and compact. It’s rack-sized – with optional rack ears available – but it also stands well on your desk. It’s solid and heavy, but not too heavy.

Connection-wise, you get 16 line and mic inputs; stereo mix inputs; four mono and three stereo outs; main and mix outs; and headphone out. That’s 18 inputs and 14 outputs, but you can expand the system up to 38 inputs and 24 outputs via dSnake, which is a connector that allows multiple audio channels to be carried via a single cable connected to A&H AudioRacks.

Other slots include the Qu-Drive USB connector for recording multitrack audio to USB; a Footswitch controller; and finally, there’s a Network connector. This is one of the key features on the unit, as this is where you’ll need to connect up to a network via a router to set up the Qu-SB to work with an iPad.

It is a shame here that the unit doesn’t come with its own wireless router to do this – although A&H is planning its own solution – as you will want to have your own network rather than rely on others, especially if you’re on the road travelling to various unpredictable (web-wise, that is) venues.

However, this is perhaps not a problem in a studio setup, where you could even consider wiring it into your home network. And it’s well worth the effort when you see the iPad working…

You will need to download the free Qu-Pad app to control the Qu-SB with your iPad or, interestingly, there is a Qu-You version available for individual band members to control their own monitoring levels, using iPhones or Android phones.

Once you start the app, you select the network you’re using and are asked which of the A&H mixer ranges you wish to control. The app works with the Qu range, so we’re pleased to report we’ve had a lot of experience with it with the main MusicTech studio mixer, the Qu-24. Indeed, if you have used any other Qu via this app, you’ll barely notice the difference visuals-wise, as the Qu-SB is simply its configuration mapped to the iPad’s touch screen in graphically the same way.

Likewise, the Qu-Pad is, as you might expect, a very similar user experience to using a Qu-24 mixer, and I can only mean that in the most complimentary of ways. The tabs, channels strips, effects, compressor, EQ… everything is laid out in a similar way to what you’re used to as a QU user and a logical way if you’re not.

I’ve run through a few of the main screens you can get above, but suffice to say, there are many more options. You can name channels; set up groups; copy and paste settings; obviously, patch different inputs and outputs; assign soft keys, scenes… everything.

And the whole lot, including data settings, audio tracks and stereo mixes, can be saved to the Qu-Drive (USB). It really does rival the Qu hardware for a mix experience and is as near-as-perfect a Touch experience I’ve had in a mixing environment: especially the compression and EQ drag changes which mimic the hardware experience of the Qu-24 (and indeed, of course, the touchscreen on that model, come to think of it). 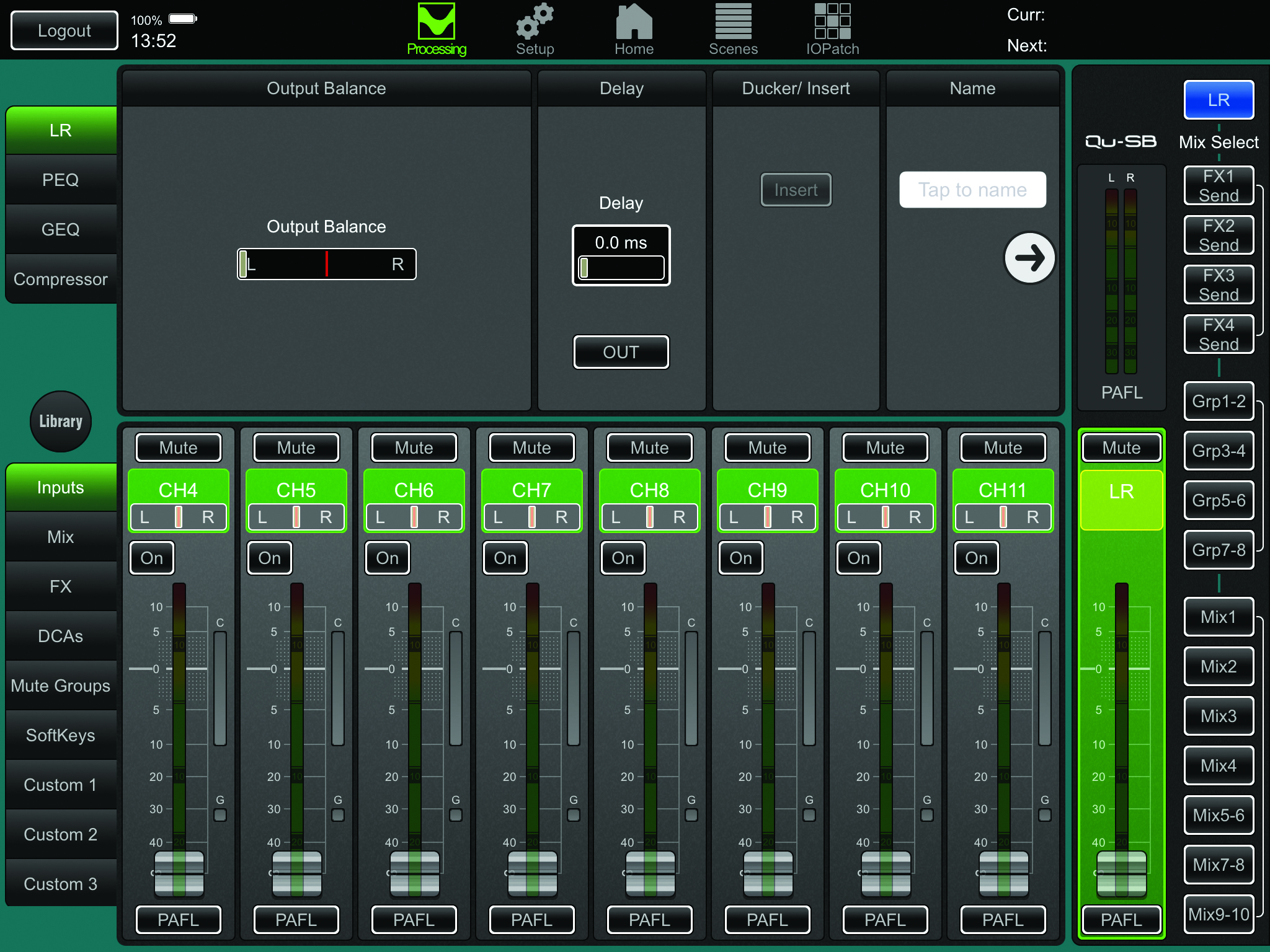 1: Your input channels run along the bottom; tap to select and your chosen one turns green. 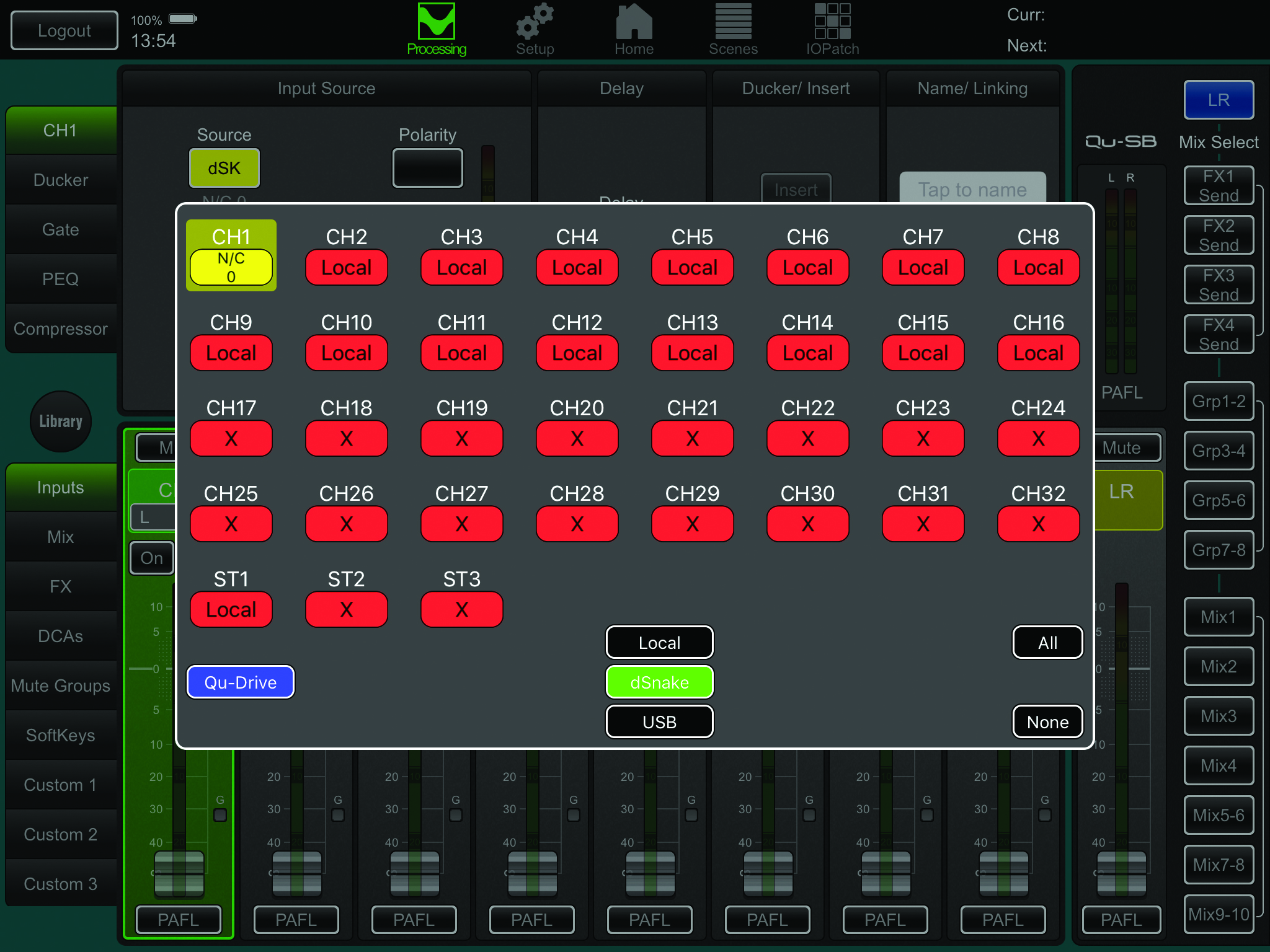 2: Choose inputs from Local, dSnake or USB via the unit’s interfacing capabilities. 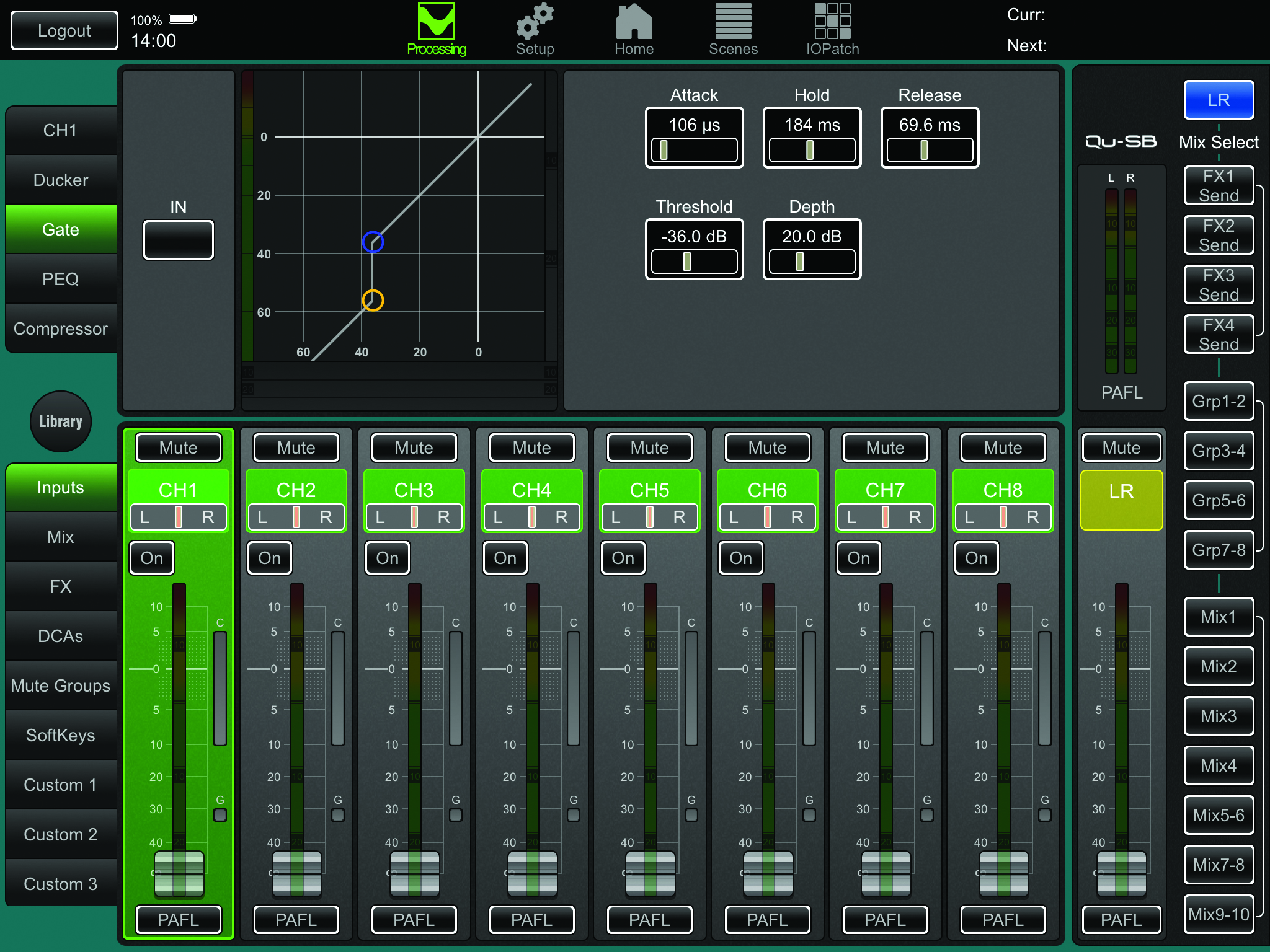 3: Lots to change by swiping and dragging. Here, we’re showing some Gate nodules. 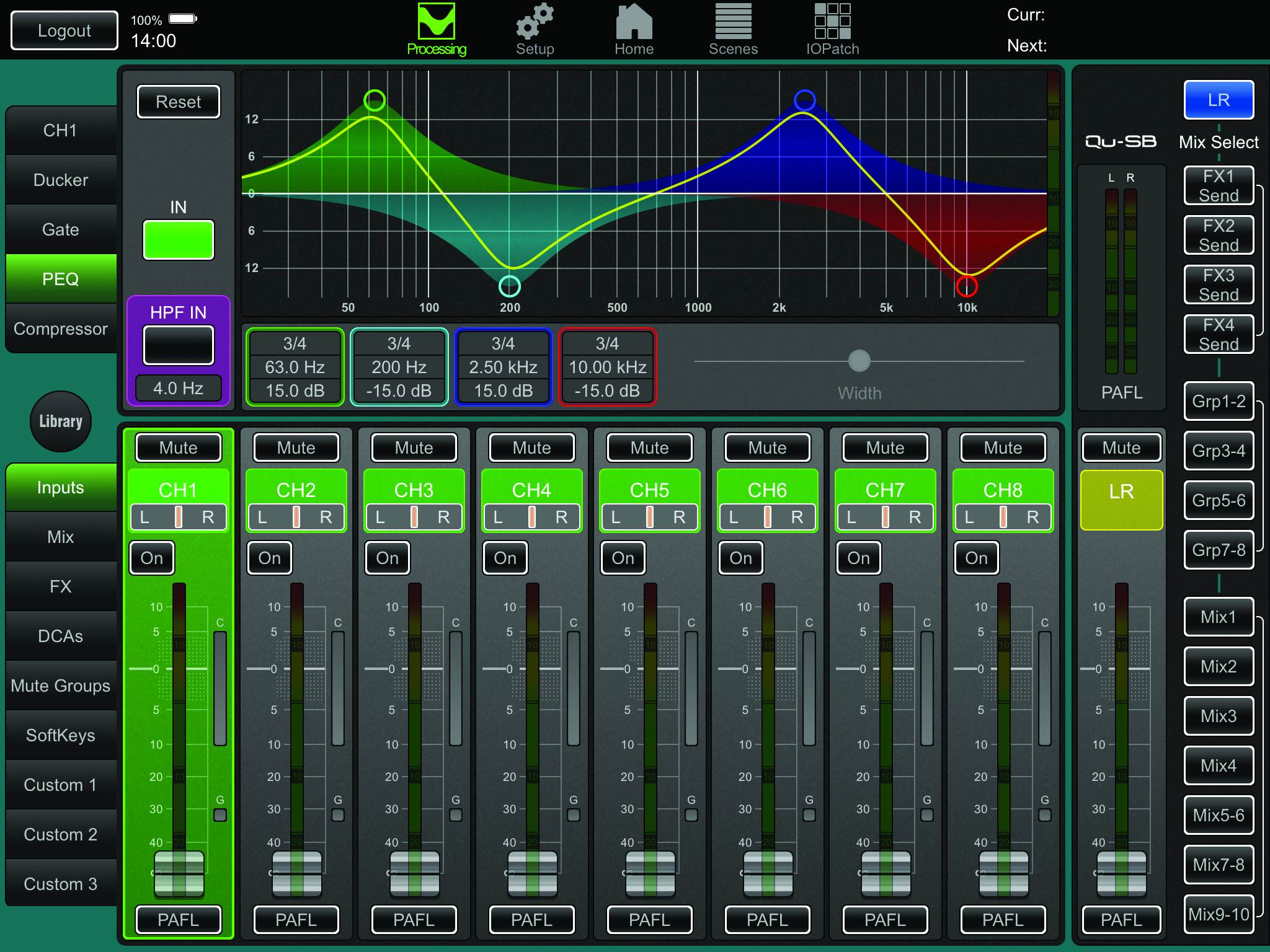 4: The EQ is a bit special with loads of hands-on control to allow you to really fatten and thin… 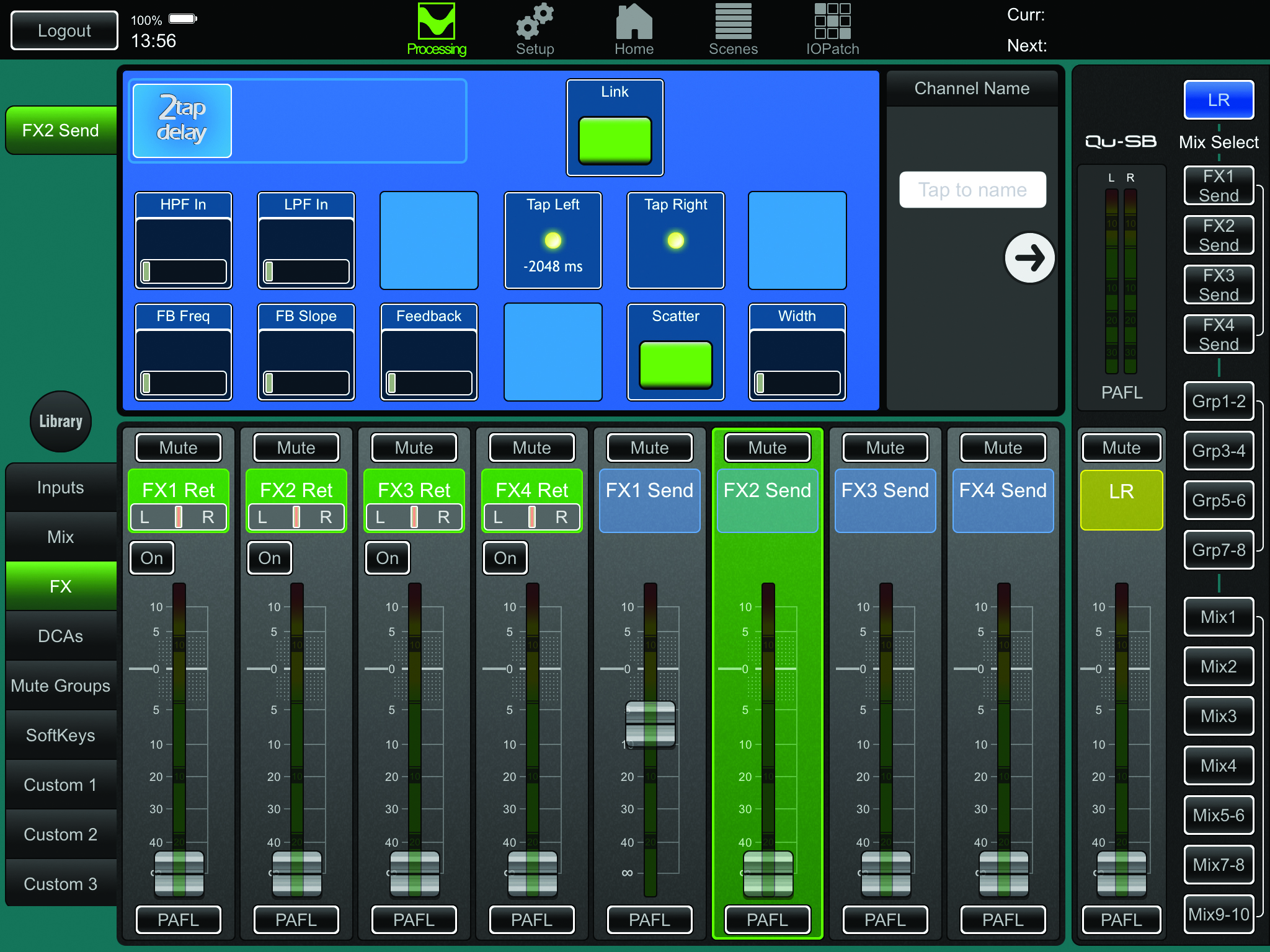 5: Now it’s the turn of the effects. Select an Aux send and choose an effect from the library… 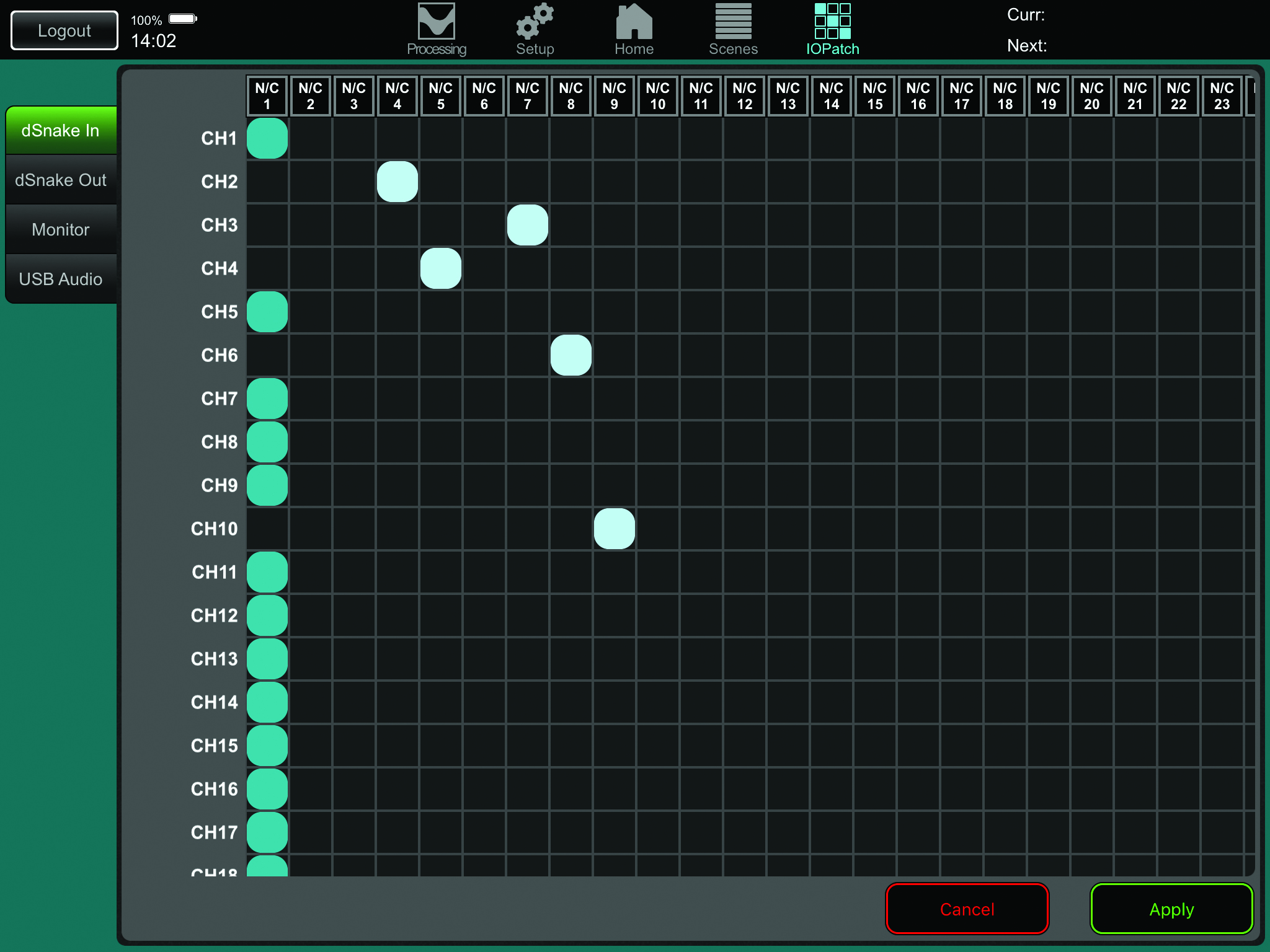 6: And then we’re routing back out. There are loads more features in this most intuitive of apps…

The Soundcraft Ui-16 (£499) is cheaper, does less, but is easier to set up and use more practically, but aimed more at live users. I’ve also since looked at the Presonus RM16, the closest to the Qu-SB and it features 16 XLR inputs, 32 internal channels, effects, eight XLR outs and some great UC Control external software that can be used via tablet as a standalone app. It comes packed with features, too, and costs £1,099.

Of course, it’s easy to assume (incorrectly, in this case) that once you are in an iOS environment, the iPad is making all of the noise. And so intuitive is this experience, so that illusion is enhanced.

But of course, the sonic power comes from inside the Qu-SB, and it’s every bit as good as the sound from the rest of the range.

The effects are excellent and based on four iLive FX engines; the 16 ‘AnaLOGIQ total recall’ preamps are warm and undiminished, with 24-bit ADCs. Other features include a four-band PEQ, 1/3 octave GEQ, compressor, delay on all outputs and a load more, all leading to the conclusion that this is one powerful mixer. Oh, and did I mention it doubles as a 32-in, 32-out USB interface?

Which is a key point, because while this is being touted as a live mixer, it is the unit’s recording features and capabilities that make it a fantastic tool to interface to your DAW and record anything. You could hover around a band, make adjustments with your iPad and then tweak the results inside your computer. Another genius hard/soft/touch combo. 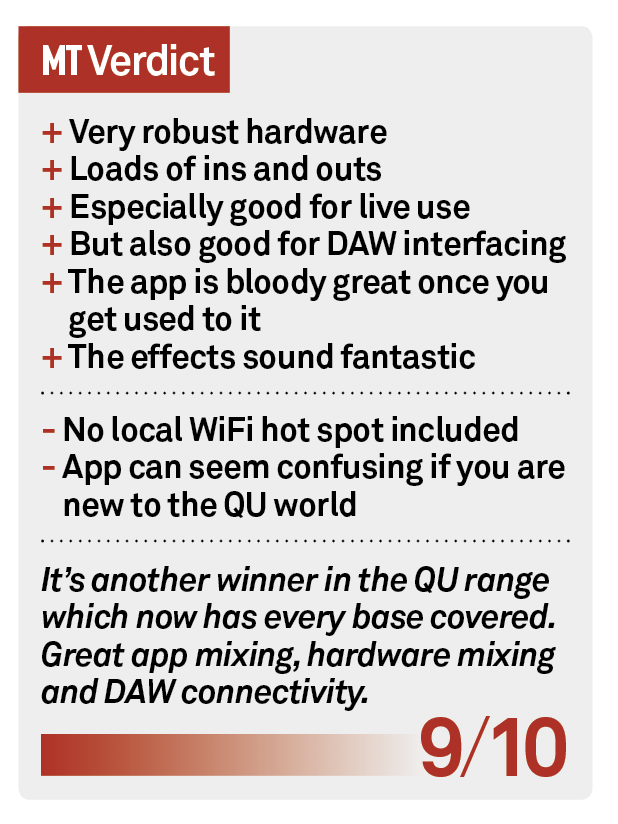