To celebrate our massive new app feature, you will want to upgrade your iPad’s audio. Alesis might have just the solution. Hollin Jones goes mobile with the IO Dock II… Details Price £119 Distributor InMusic Contact :Via website Web www.alesis.com Amazon.co.uk Widgets Alesis was one of the first companies to come up with a genuinely […] 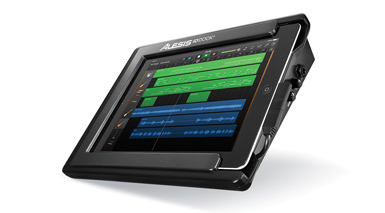 To celebrate our massive new app feature, you will want to upgrade your iPad’s audio. Alesis might have just the solution. Hollin Jones goes mobile with the IO Dock II… 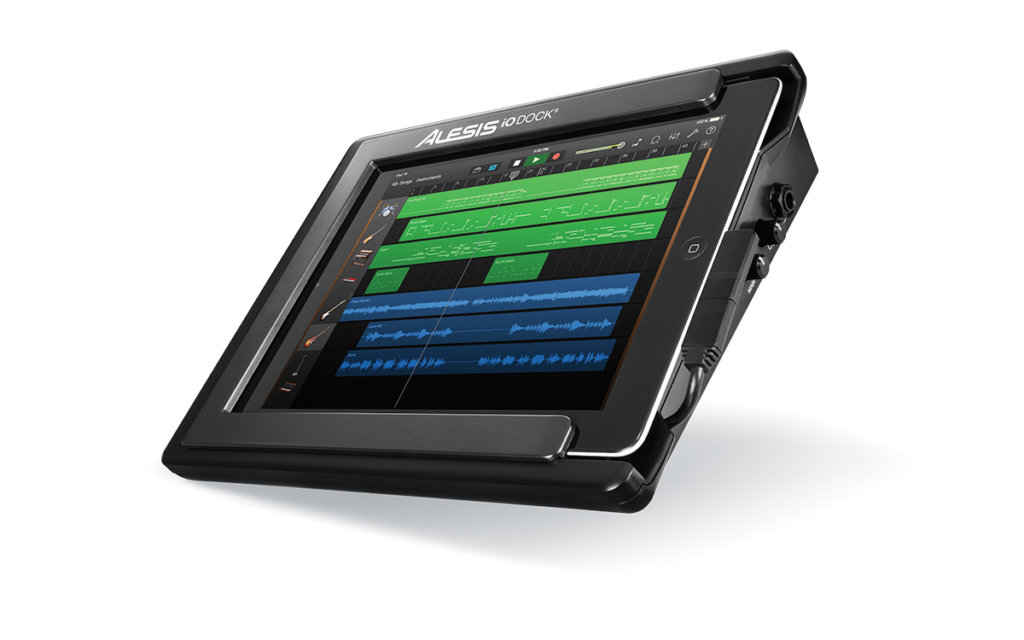 Alesis was one of the first companies to come up with a genuinely professional accessory for those making music on iPad, the IO Dock. Its successor brings some evolutionary changes though it has now been joined on the battlefield by a few competitors. The idea is that since the iPad really only provides a single port for getting sound, power and MIDI in, you need to build a system around it that gives a musician the kinds of I/O they are more accustomed to. And if possible, do so without having interfaces dangling on wires while doing so.

Look and Feel
The IO Dock II doesn’t shift radically in design from its predecessor, maintaining a solid and rugged feel while remaining fairly lightweight and portable. It supports iPad models 1-4 and there’s a slide-out insert to compensate for the smaller bodies of specific iPad models. There are two connectors supplied to handle both 30-pin and Lightning connections and these are interchangeable, plugging into a master connector attached to the side on a short wire.

You may be wondering about this slightly muddled support situation. Well, we’ll try to explain as simply as possible! The first three iPad models had 30-pin connectors and the fourth had Lightning. The newer iPad Air and Air 2 both have Lightning but Alesis doesn’t supply inserts to accommodate their body sizes.

Since they are smaller than previous iPads, the newer models will sit inside the IO Dock but are not held in place. You can plug them in and they do work, since all the data is carried over the Lightning cable, but they are not officially supported just because of the size issue. 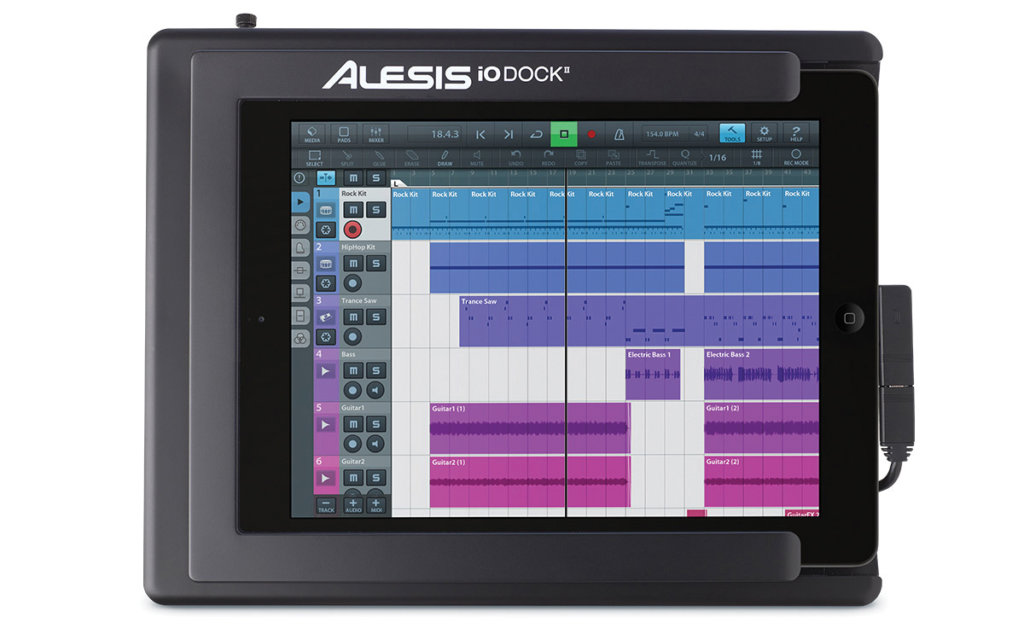 Apple has discretion when it comes to officially certifying third party kit as “Made for iPad” and in this case it appears that such approval has not been forthcoming. While the iPad 2 is still in fairly widespread use, it’s hard to imagine anyone trying to make music on an iPad 1.

In Use
With your iPad connected, it begins to charge automatically when you plug the IO Dock in with its bundled power supply. What you get is a surprisingly good selection of I/O that brings proper connectivity to the iPad platform.

There are dual combo XLR jack inputs with switchable phantom power and gain controls on the back and one of them has a switchable guitar/mic/line switch and there’s also a guitar direct switch. A footswitch input allows you to trigger recording remotely where supported and there are stereo jack monitor outputs as well. On one side of the unit is a master volume output dial as well as a single headphone out with variable level control.

The other side of the box contains MIDI connections and here you get USB MIDI in and out as well as two hardware MIDI ports for connecting external kit to your iPad instruments or your iPad sequencer to external kit. Getting sound and MIDI in and out works via the CoreAudio and CoreMIDI frameworks in iOS so there’s no real setup required. When everything is plumbed in, the inputs and outputs will appear to your apps like GarageBand, Auria, Nanostudio and others.

The IO Dock has 24-bit converters that do a great job of capturing sound and tracking into a compatible app is a breeze. Connect guitars, bass, dynamic or condenser mics or synth and other hardware. There are only two inputs at any one time but this can be enough for anyone working on such a compact scale.

In The Dock?
The IO Dock II does a great job of turning your iPad into a much more powerful recording environment than some other add-ons have the ability to do. It’s a shame that Air and Mini models aren’t officially compatible, though they can be connected and will work – just don’t move anything around. More importantly, this kind of dock device is no longer the only game in town when it comes to iPad production.

As well as competing docks from the likes of Focusrite, an increasing number of smaller audio interfaces are gaining iOS compatibility. Boxes like the Focusrite iTrack Solo, Apogee Duet and Quartet and Roland Duo Capture EX all feature both computer and iOS compatibility, meaning you get more flexibility. It’s true that they usually require a Camera Kit adaptor to work with iOS and so are not as elegant a solution as a dock, but that won’t bother everyone.

Considering what you get, the IO Dock II is competitively priced and it’s certainly a clever way to expand your iPad into a more rounded audio and MIDI recording environment. With official support for newer models it could be an even better deal and stake a claim to being the most effective way to turn your iPad into a pro music production tool. 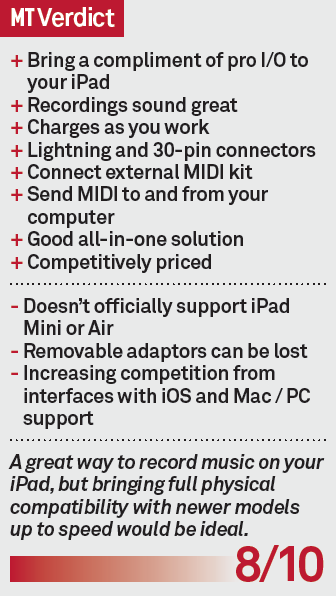