AKG has released possibly its most affordable series of headphones ever. Andy Jones asks if they are too good to be true…   Details Kit K52, 72 and 92 headphones Manufacturer AKG Price £39, £49, £59 +VAT Contact Sound Technology – 01462 480000 Web www.soundtech.co.uk When it comes to a lot of music-production gear, we don’t mind […] 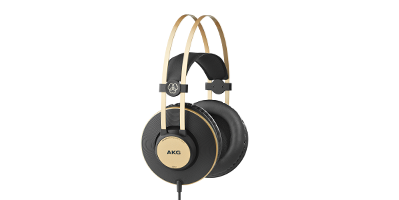 AKG has released possibly its most affordable series of headphones ever. Andy Jones asks if they are too good to be true… 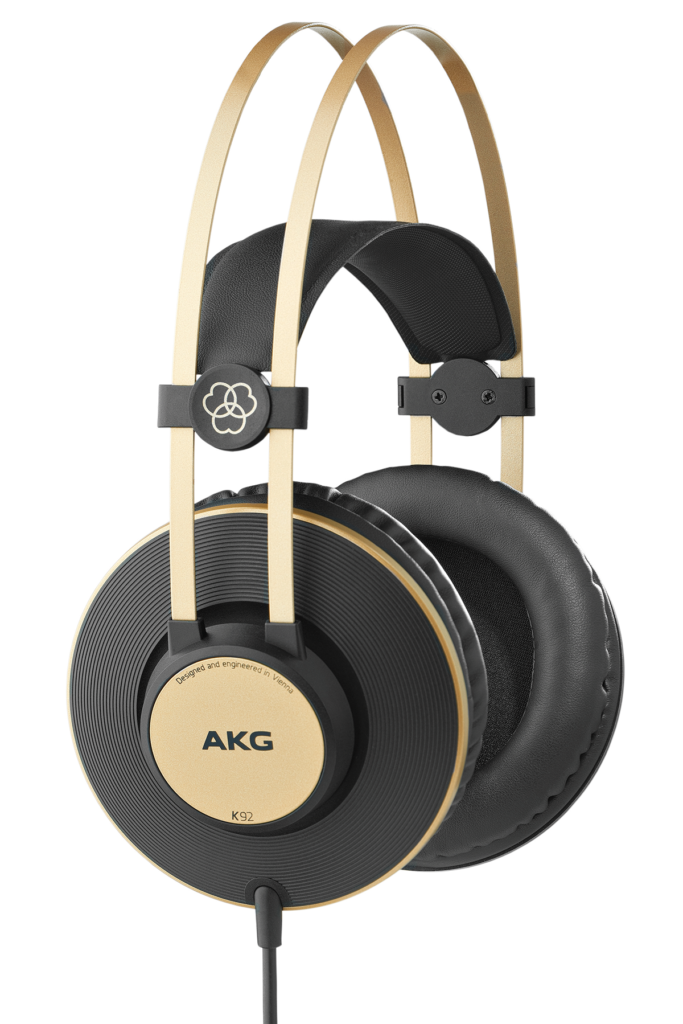 When it comes to a lot of music-production gear, we don’t mind admitting that we can act a bit highbrow and snobby. Generally speaking, we tend to recommend expensive studio monitors, for example, simply because they tend to be the best ones. You pay a lot more money for an extra two-per-cent accuracy, but that accuracy is the most important two per cent you absolutely need when you are mixing.

The same applies to headphones used for monitoring – of course it does. After all, it’s no good spending a fortune on synths, software, outboard and mics, if you’re mixing the end results on a cheap set of ’phones.

Which is a fine, and we think admirable, stance to take on the matter. But then, along comes AKG – a company that produces at least one set of gobsmackingly accurate headphones that cost well over four figures – and releases a range of headphones that cost, at most, 70 quid. This is a company that knows its stuff sonics-wise, so how dare it try and rock our snobby, highbrow ‘throw money at your speakers’ boat? How dare it indeed.

You can afford any model in the K Series. The cheapest, the K52, weighs in at just £39 plus VAT; the most expensive at just £59 plus VAT. For headphones aimed at the mixing market, that is extraordinary. I’ve been recommending headphones costing at least three times this amount and will be putting them up against such reference ’phones – so we could be in for some surprises.

The K range relies on two main design elements for its price-versus-quality selling point. The first is the 40mm drivers present in all three, which offer a wider frequency range and a higher sensivity, for a bigger output. The second feature is the closed-back design, which leans heavily towards comfort, as we shall see.

We’ll start with the cheapest 52s and spec-wise, these have the shortest cable of the three (2.5m) and narrowest frequency range. All three ’phones are lightweight, which could be seen as ‘cheap’ – but actually, I’d be pointing out this as a positive on more expensive ’phones, so let’s look at this as a bonus – you don’t want something heavy on your head during long mix sessions. 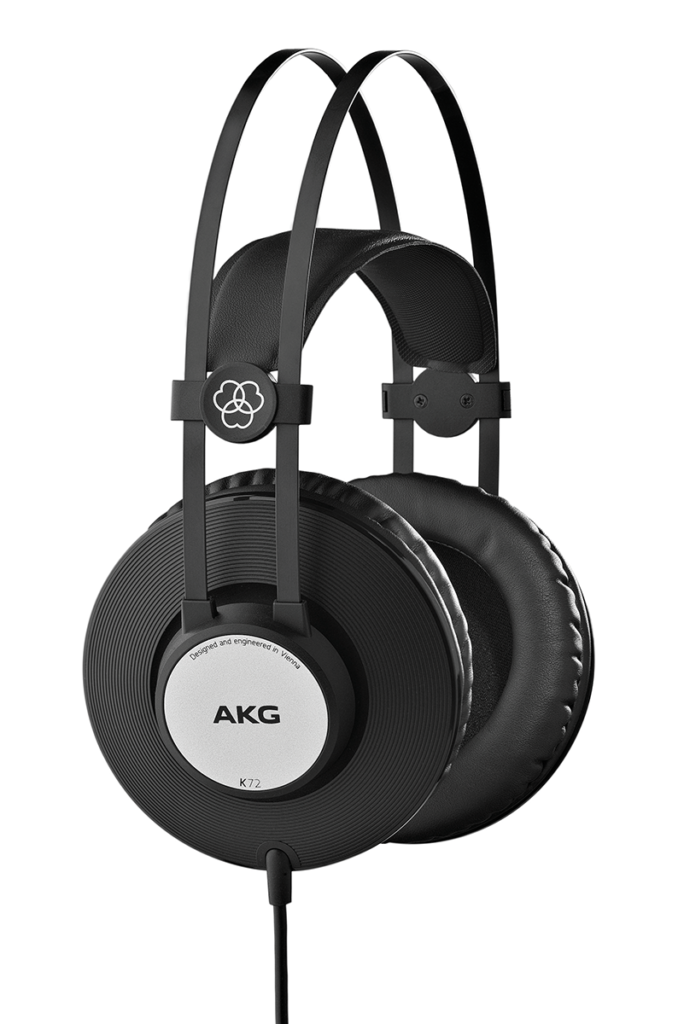 The 52s are very comfortable indeed. The band keeps them tight – but not too clammy – on your head and the isolation is decent, though not spectacular. They don’t pass my typing test – i.e. can I hear myself typing while wearing the ’phones? – but they do feel encompassing and just right.

Sound-wise, they are found wanting in the bass, but not as much as you’d expect. This is an area that cheaper headphones often struggle with and one thing manufacturers will do – as with speakers – is colour the sound here. Thankfully, AKG hasn’t, but that does mean it’s lacking. Having said that, I’ve heard far worse than these at exactly this price point and the sound does punch through… so they’d be a good set of cans for monitoring in a live scenario.

Upper mids are there in abundance, lower mids not so much. However, the spatial separation is there and almost a match against our reference ATs; but the sound sadly isn’t – it’s not rounded, and a little too aggressive – but let’s keep reminding ourselves that these are one sixth of the price. Yes, you read that right: one sixth!

Stepping up a Level

So now we move on to the K72s and the difference is not immediately obvious. You get ’phones that are just as light in weight, and just as comfortable –identical, in fact. The isolation is also the same – decent if not perfect – and the wearing experience is good. They are comfortable, not so noticeable and good for longer sessions.

Sound-wise though, these are a step up. When A/B-ing with the 52s, you really can hear the presence of the extra couple of bass hertz, which helps make the sound less in-your-face. It’s still up there and upper middy compared to our reference set, but you can start to pinpoint more things in your mix compared to the 52s and that’s important in mixing. If you can identify a problem area – which you can just do with these – then you can start mixing.

Onto the final set, the K92s, and we’re talking nearly double the price of the cheapest K52s – but still only a shade over 70 quid in total. While the only significant immediate difference with the 72s over the 52s was a silver circle on each earpiece, the K92s offer gold trim and a headband – not real gold, you understand, although the adaptor is gold plated.

This obviously helps them stand out against the other models in the range, as do the specs. 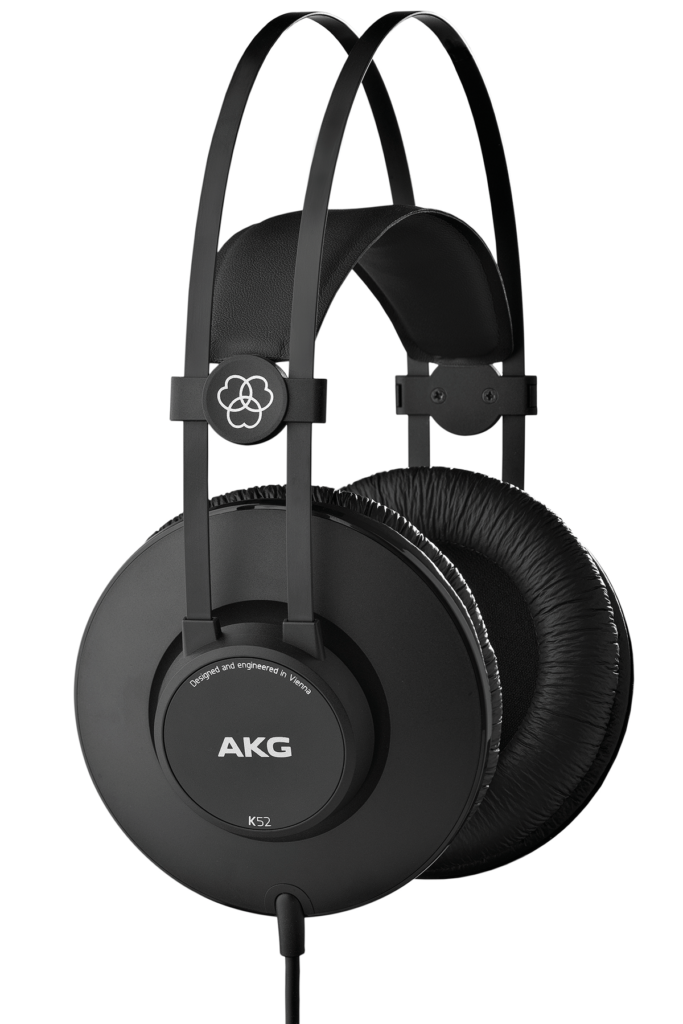 The 92s have the widest quoted frequency range and this is apparent in my tests. While they are still not up there with my reference ’phones (now only three times the cost!), they’re not bad at all. I could pick out more bass, more lower mids and separation is again good, as is comfort.

Isolation is again reasonable – we’re talking a very similar wearing experience to the others, really (same design and weight) – and as for the sound, you can certainly pick out what you need to in order to make a good stab at mixing. Again, this mix is a bit shouty compared to the more rounded performance from my reference set, but it is certainly a lot calmer and more consolidated than both the 52s and 72s and really pretty good for ID-ing mix issues. 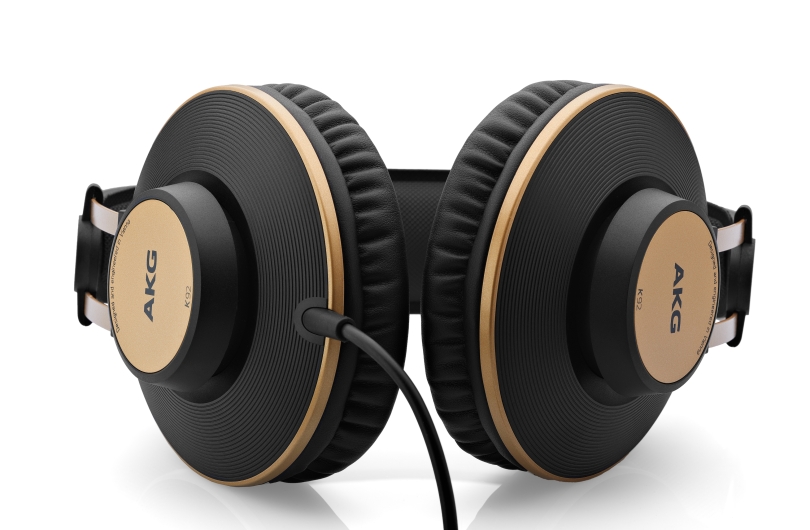 For a bit of a laugh – as you do – I put the 92s up against a set of AKG K812s that I have finally got in for review (long story) just to see how they’d cope. These AKG s are £1,300-plus, so, yes, they sound incredible. A beautiful, open mix. However… the K92s didn’t sound like just 1/18 of the price – you could hear much of the detail, albeit in a more compressed environment, like the aural equivalent of the roof going on at Wimbledon (okay, maybe not).

We haven’t looked at many sets of cheaper headphones of late, so these stand alone in the low end of the market. We still – in the main, anyway – stand by our ‘spend more’ philosophy and on that score, some of our standards include recent models by Ultrasone (P880); Audio Technica (ATH R or M70), KRK (KNS8400) and Blue (Mo-Fi).

Of the three, we definitely recommend the K92s. They have the best specs and are a step up sound-wise, with the wearing experience of all three being otherwise similar. Indeed, they do challenge, but not quite beat, our ‘spend more money’ on speakers philosophy, and could be the best ’phones you can get for two figures. 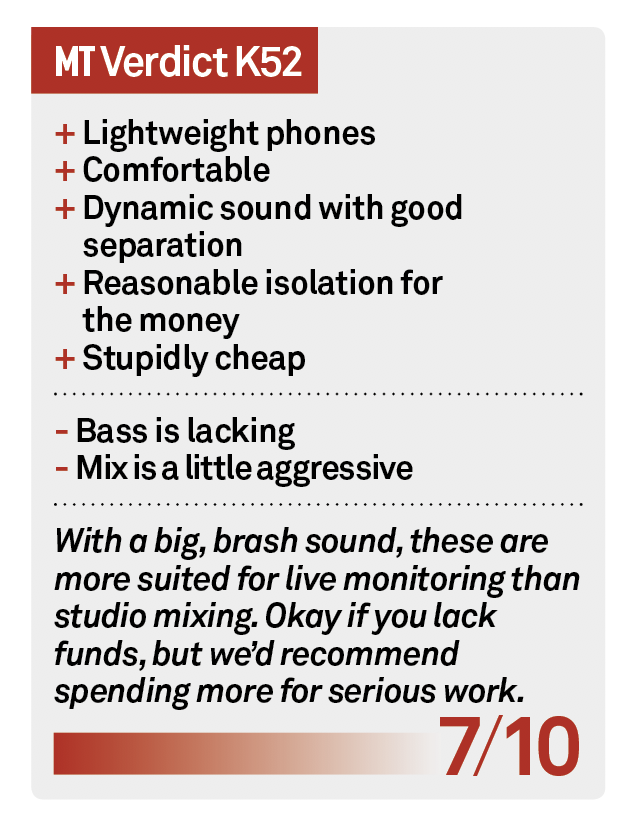 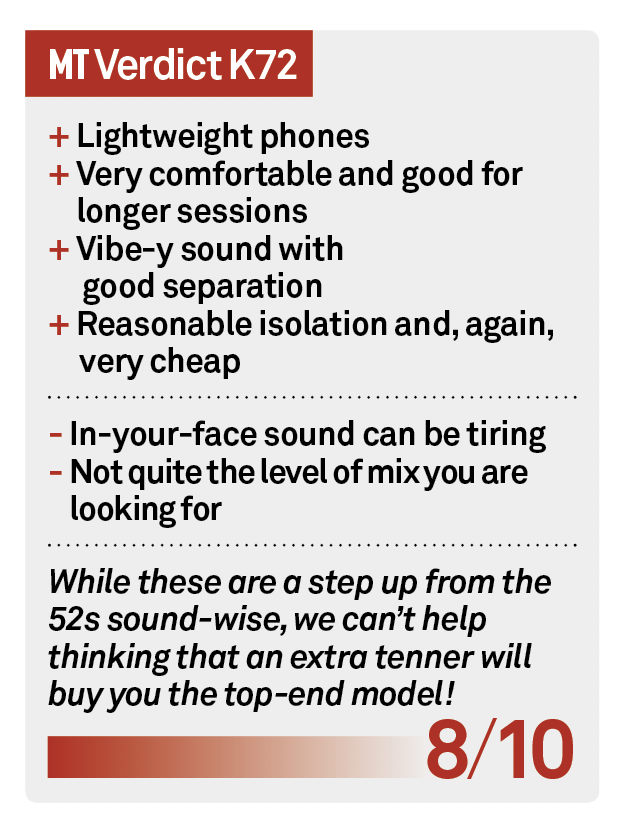 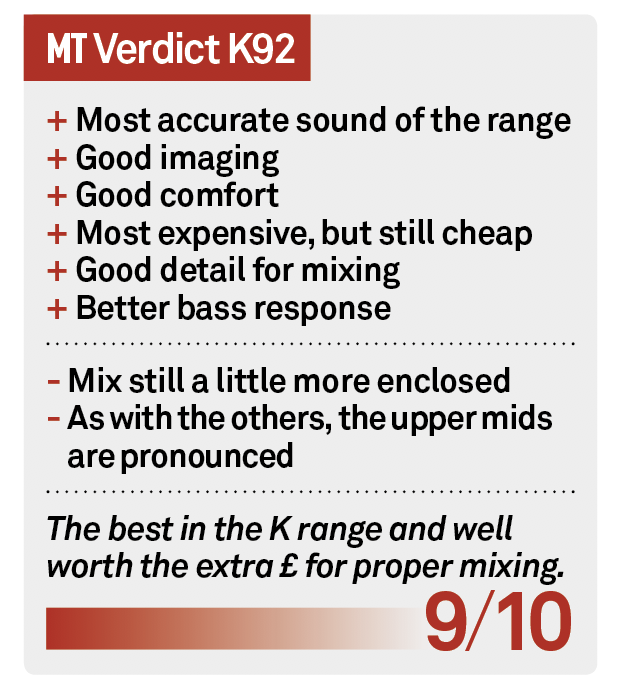