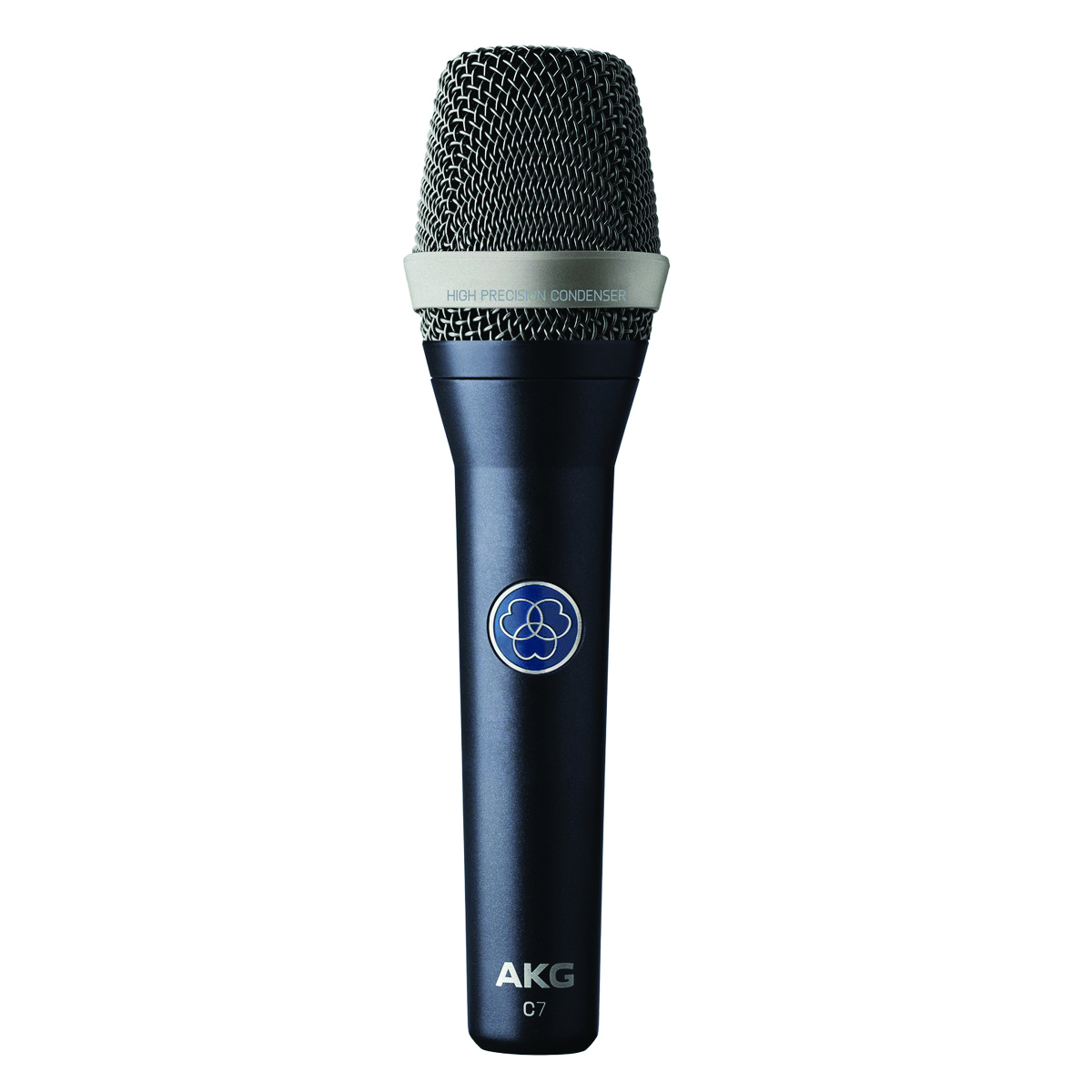 Recreating your studio vocal sound on stage can be tricky. Studio condenser mics are expensive, and aren’t built for the rigours of the road. Their extra sensitivity makes them prone to feedback and the extra movement on stage makes them liable to pick up rumble, too, especially as they aren’t intended to be held. Dynamic mics, then, have ruled the roost on stages, particularly for vocalists who like to hold the mic rather than use a stand. However, hand-held condensers, while rare, do offer vocalists the opportunity to achieve more studio-like sound on stage. These mics seek to deal with the problems of feedback and rumble with tight pickup patterns, filters and built-in shockmounts.

The AKG C7 is aimed at live vocalists looking for a step up from the dynamic mic on stage. Like its sibling the C5, the C7 is stylish, with a solid weighty feel that inspires confidence. It comes with an optional windshield, mic clip and a tubular, soft, foam-lined zipbag.

The C7 houses a 3/4-inch condenser capsule in a specially designed, reflection-free open space, designed to reduce air turbulence and inner reflections inside the capsule to create a consistent super-cardioid polar pattern across the entire frequency spectrum. This is important, as the polar pattern of many mics is more directional at high-frequencies than it is at low frequencies, colouring the off-axis response.

On our male tenor vocal, the C7 captured a stunningly clean and natural representation of the voice. The bottom end was tight and controlled; the mids open and the high-end smooth, with no sibilance. Getting in close on the mic to bring out the proximity effect enhances the bottom-end but still manages to sound clear, rather than muddy. So no heavy-handed EQ is needed from the console and we ended up adding a touch of extra top-end shelf to bring out a little more air around the vocal, plus a little boost at 5kHz for presence.

Comparing the C7 to a standard SM58 reveals a much more flat and detailed response, although it doesn’t have quite the bottom-end of the SM58, thanks to a built-in 12dB/octave 150Hz high-pass filter. The SM58 has a nasal quality around 2.5kHz that needed notching out and a much more boomy bottom-end, which required filtering on the console as it doesn’t have a filter built-in. Even with this EQ, the additional detail, especially through the upper mids, brought clarity and depth to the performance using the C7, and we were able to get much more nuance from our vocalist.

With an alto female vocalist, the C7 again performed admirably. We’ve often needed to heavily EQ the midrange on this vocal, boosting around 800Hz and pulling down a wide cut around 2 to 4kHz to get it to sit. But with the C7, the vocal sat more easily in the mix. We added a little 800Hz, but found no extra cut was needed above this. Again, the proximity effect added weight to the vocal, and our vocalist could use this as a technique to enhance certain phrases in the performance, pushing into the mic to enhance the feeling of intimacy.

The AKG C7 is a wonderful-sounding mic that’s open, natural and detailed. If your vocal mic isn’t getting you close enough to the studio sound you want in your performances, then check the C7 out. It doesn’t have quite the open top end of a high-end studio mic, but it runs some close. The built-in high-pass filter isn’t switchable, which reduces the mic’s flexibility. 12dB/octave starting at 150Hz may seem a lot to remove from the bottom end, but in use on vocals, it sounds great and we didn’t feel it was lightweight. AKG has got this absolutely right: it’s rare to need any frequencies below this cut-off point. But if you’re hoping to use it on instruments, you might need to choose them wisely.

However, just as condenser mics aren’t always the right choice in the studio, the C7 isn’t going to work for everything. The extra detail and smooth frequency response will flatter some vocals, but on others, it may reveal more than intended, warts and all. The less than hi-fi response of a dynamic mic is often exactly what is required.

As well as the C7, AKG also has its C5 hand-held condenser, which is a similar microphone with a cardioid polar pattern. Neumann also builds hand-held condensers and we’ve had some great results using our KMS 105, particularly on female vocals. 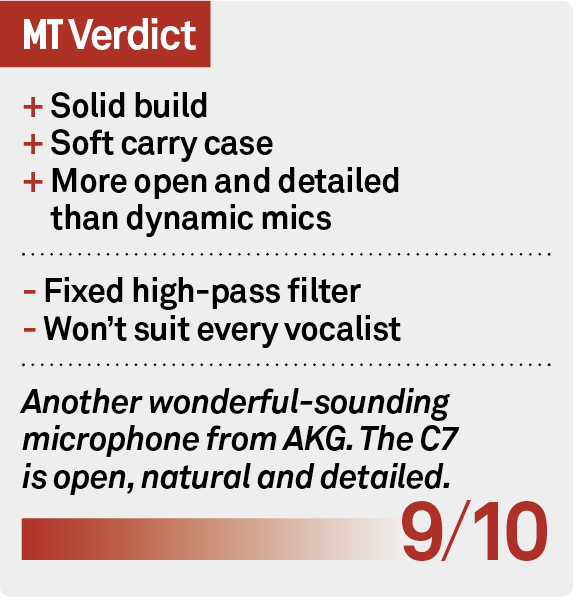