It’s a world first, as FL Studio gets its own controller from Akai. But will it fire up a DAW used by millions? We strike our reviewer match. Stand back… 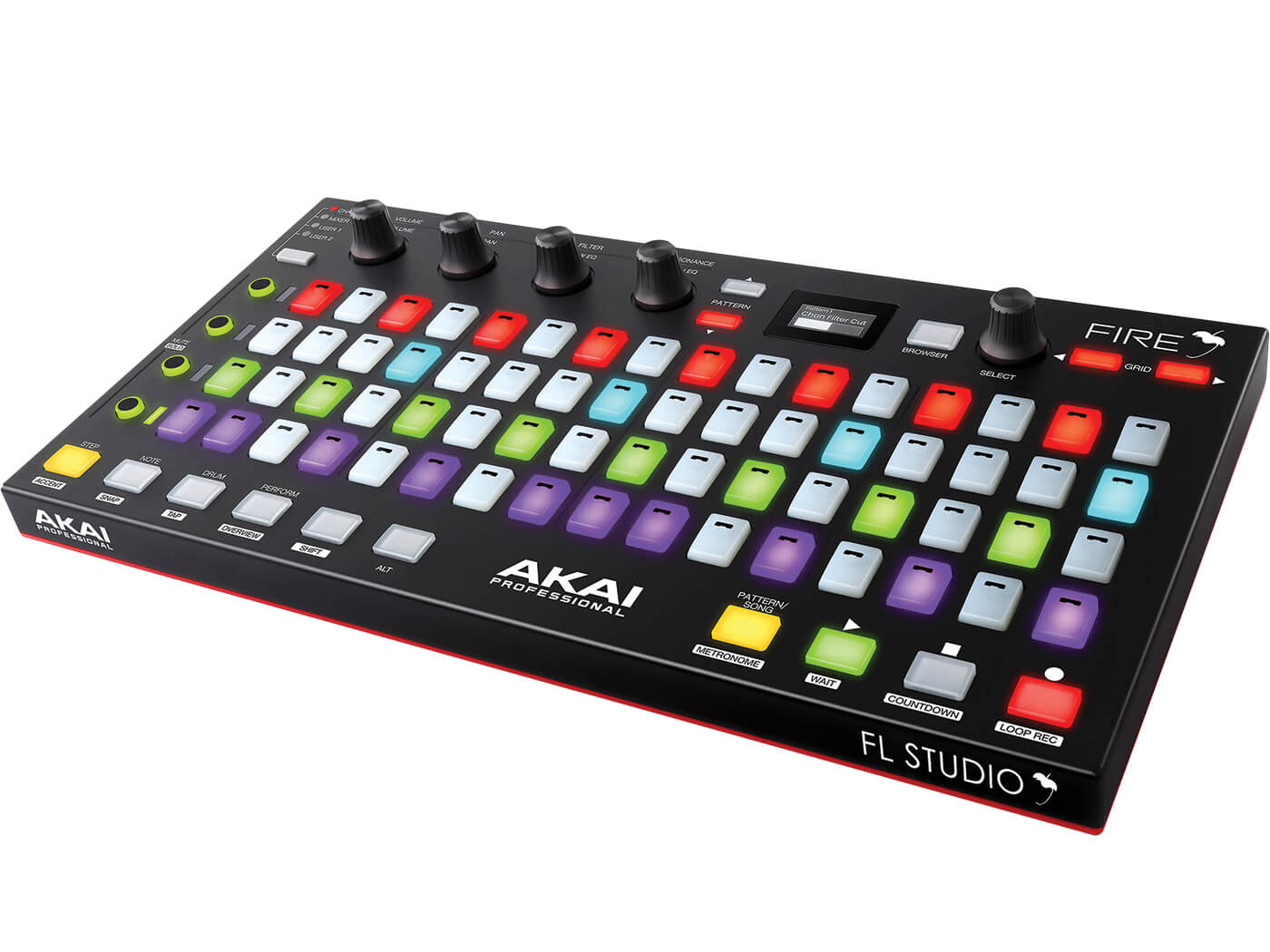 A dedicated controller for FL Studio might seem like a short-sighted idea, given that most other hardware controllers out there offer at least a little control over a lot of different DAWs. However, as I saw when reviewing the latest version (20) of FL Studio a few months back, this DAW has arguably the largest userbase in the world thanks to makers Image-Line’s policy of offering free updates to the latest version since its first release from developer Didier Dambrin back in the late 90s.

FL Studio 20 also now runs on a Mac as well as PC, so has become a great cross-platform choice for producers across the globe. Not surprising, given that it now includes all sorts of pro features, around 80 plug-in instruments and effects – but still retains the same ease of use it has become famous for.

So it’s no surprise that Akai has developed a specific controller for the DAW – that is one large and happy audience to tap. Fire is its name, but will it be a warm hardware welcome to the loopy FL Studio world?

Price-wise, Fire seems to be very competitive. Retailing at just £179, it already seems like an attractive purchase for a sector of the DAW market not used to splashing out on upgrades. It is pretty light in weight though, although the build is solid and, thanks to the rubber feet beneath, it isn’t going to move around that much after you get it in position on your desktop.

Control-wise, everything feels responsive and rugged. Rotaries have divisions where needed and the buttons – mostly used to replicate the Channel Rack buttons in the software – feel suitably sensitive, with the transport buttons offering a reassuring on-off click.

FL Studio users will know that the software’s raison d’être is creating loops in Channel Racks and then arranging these on the main Playlist (arrange) section in the main window to make a complete song. Channel Racks can be anything – beats, synths, instruments and so on – and you can mix and match Channel Racks on tracks. So a single track could, for example, have a bassline and beats, switching between the two. There are no limits on what goes where, so Channel Racks are important, and that is the main focus of Fire.

Fire shows the 16 parts of a Channel Rack over four tracks and you can link four units together to give you instant access to over 32 parts on eight tracks. You also get complete navigation around the main parts of FL Studio, namely the Channel Racks, Playlist area, Toolbar and Browser.

Setting up is a matter of plugging in via USB, which the unit is powered by. You will need to make sure your FL Studio is up to date (I needed to make the update to the latest 20.0.5.91 version in order for the software to completely recognise Fire). You’ll also need to select Akai FL Studio Fire from the drop-down MIDI input menu in MIDI preferences.

After that, I then kept on getting an ‘Access Violation’ error whenever I hit any of the main keys, which then made the unit non-responsive. I then had a few frustrating crashes of FL Studio and more freezes of the hardware before a quick check on the Image-Line forums resolved this. You have to make sure your MIDI Port settings are correct. I set mine to 1 and then did a complete restart to reset everything. You’ll also, at least for the first boot up anyway, want to have Fire connected before you boot up FL Studio. It was initially a frustrating process, but eventually, the Fire was lit.

The main modes in Fire are Step (for pattern sequencing), Note (for playing and recording notes), Drum (for beats) and Performance. In Step mode, you’re essentially in the FL Sequencer mode, where you can fill in your Channel Rack patterns in the traditional manner.

You can easily navigate to a chosen pattern and extend its length from the initial 16 beats in groups of 16 by using the Grid left and right buttons, top right. Using this sequencer is obviously where Fire excels – it’s almost the most important part of the controller. This is not exactly a hard thing to do within the software, but this hardware seems to make such processes more tangible.

In Note mode, the controller turns into a four-octave keyboard of sorts, so you can record proper keyboard playing and play in different selectable scales, too. Velocities of recorded notes can be adjusted by holding them down and turning a colume rotary clockwise to increase (and you’ll see the colour of the key brighten as you do).

This works in Drum mode, too, which turns the unit into two four-by-four MPC-style grids for playing drum plug-ins such as FPC. It’s another of Fire’s highlights, as it just makes the process more intuitive and beat creation even easier than the software.

Finally, within the main modes along the bottom left is Performance mode, a kind of Ableton-like clip-launching mode that doesn’t work off the bat and is something you’ll have to set up to utilise to its fullest – this is an area that we’ll explore more fully in a future tutorial.

The transport controls on the bottom right are fairly self-explanatory, although the metronome button also doubles as a toggle between Song and Pattern modes so you can either record and cycle around  Patterns within a Channel Rack or within a complete song. There are four continuous rotaries at the top left that are used in a Mixer mode to control channel parameters. You get volume (also for note velocity as described above), pan and both filter and resonance, both recordable across Patterns and Song. Alongside Mixer mode are two user-definable modes, where you can set up user controls and introduce effects and other definable controls.

Where Fire really beats the software is for things like changing sounds in a Channel Rack. You select the sound by holding the Alt key, then hit Browser to open up the available folders, each name appearing on the Fire screen. You then home in on your sound by pressing the Select dial to open folders and audition your sounds by pressing the Grid key. You can then replace your sound with your chosen sample, all without really needing your computer screen – the definition of good hardware control right there – although the small screen on Fire will inevitably mean you do turn back to your computer for more detail.

Perhaps it was the initial faff I had setting Fire up that tainted the end results ever so slightly, but I couldn’t help thinking halfway through the review that I was actually using hardware to do something that FL Studio already does with some aplomb in software anyway.

However, continued use of the unit did eventually pay dividends and you find yourself jumping around, playing in beats and notes, adding effects and a lot more very quickly. So there’s no doubting that Fire adds a level of control and speed that a mouse and traditional DAW operation don’t offer, but the initial learning curve might be steeper than you’re used to with the software.

Yes, you’ll perhaps have to work with it a little bit, and you will still keep referring back to your screen (and mouse) for certain functions, but the same can be said for most MIDI controllers.

When all’s said and done, anything that takes the strain out of DAW music making has to be applauded and Fire certainly does that – even though the strain is hardly that, er, strenuous to start with. And for the money, it’s hard not to recommend Fire to any FL Studio owner who wants to increase workflow and have another approach to Image-Line’s fine DAW to the max.

No DAW controller in the world is essential – DAWS are software studios, after all, designed to be used with mouse-clicking, key commands and little else. However, controllers become more essential the more they speed up your workflow or – in the case of Push – when they feel like instruments in their own right. Fire isn’t quite there, but it does save time and does speed up an already-quick DAW.

Fire is the only device that integrates so well with FL Studio, but others offer a level of control via Mackie Control Universal. The LX range is a good option, as you get a keyboard for low cash.

Another controller we looked at this year is this robust unit from PreSonus. You’ll have to select MCU in FL Studio and it’s never going to give you the full-on integration that Fire brings, but it’s a very sturdy controller.