AKAI practically invented the concept of the sampling groovebox, and its MPC units have over the years become firm favourites with countless producers and performers working in hip hop, electronica and many other genres, such is its versatility. As is the case in so many other areas of music technology, the computer has become an […] 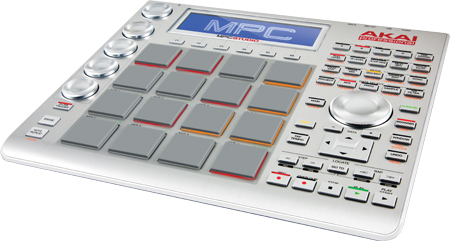 AKAI practically invented the concept of the sampling groovebox, and its MPC units have over the years become firm favourites with countless producers and performers working in hip hop, electronica and many other genres, such is its versatility. As is the case in so many other areas of music technology, the computer has become an indispensable tool for many musicians, and AKAI has certainly proved it can move with the times, with innovative designs and concepts that still remain contemporary in terms of popularity at least.

So it is that its current MPC family integrates tightly with your Mac or PC, and a couple even run on an iPad. The MPC Studio is the latest arrival, a slimline controller that hooks into the same software used by its bigger brother, the Renaissance, which we reviewed in Issue 118 (January 2013).

Going Mobile
We’re seeing an industry-wide trend of smaller, more portable but fully functional accessories for musicians these days, which people generally pair with a high-powered laptop to create a genuinely pro-sounding mobile performance or production rig. The MPC Studio certainly fits into this category with its sleek lines, and it even comes with a pouch so it remains protected when you slide it into your backpack next to your laptop.

The concept is quite familiar these days: there’s a hardware controller unit that connects to your computer and does everything over a single USB cable. It hooks into a specially designed piece of software and gives you hands-on control, with the aim of creating a seamless link between the two. You get the processing power and storage capacity of a laptop with the custom controls afforded by a specially designed piece of controller hardware.

The controller itself feels lightweight but very solid, with a brushed aluminium upper surface and a plastic underside. In terms of connections it’s pretty straightforward, with a single USB port providing power and carrying data, as well as a power on/off button. There are MIDI in and out ports, though due to the svelte frame these are provided via supplied TRS-to-MIDI  breakout cables so that the connections to the box itself are much smaller than a regular MIDI port. A lock port allows you to secure it from potential miscreants.

As you might expect, the MPC Studio has 16 velocity-sensitive pads with backlighting that changes colour to denote pressure and other functions. Most of the buttons are also backlit though their labels are not, so if you’re performing in a low-light environment a little extra lighting may be required.

The hardware needs to be connected with the MPC software installed, and this comes on a DVD with updates available online. In the box you get additional content, too, so in addition to around 3GB of loops and samples as standard you will find The Bank, one of AKAI’s instruments, plus one more which in our case was The 809, a drum machine. In total you get over 9GB of sounds with the unit and the option to add more through Expansion packs. These are installed locally but can be moved to an external drive if you prefer.

The software runs in standalone mode as well as in VST, AU and RTAS plug-in formats depending on what you need and requires a relatively recent Mac or PC. Since it is also able to load third-party VST and AU (if you’re on a Mac) plug-in instruments and effects, the same caveats apply as with any DAW. If you want to load up lots of resource-hungry plug-ins, a faster computer with lots of RAM is always going to give you a smoother ride.

When setting up the software you can set custom as well as default plug-in locations and though we had a few initial crashes while scanning plug-in folders, this was probably due to older versions of plugs, which once moved no longer caused any problems.

The aim of the MPC Studio is to place as much control as possible at your fingertips using the hardware, and as such the controls are largely mirrored between software and hardware. The layout isn’t identical, of course, but the functions are. The box has a large LCD screen which conveys plenty of information, and many buttons have secondary functions that are accessed using the Shift key. The software is by definition more visually flexible and has a number of sections and tabs to let you browse, program and edit sounds and patterns. On the whole the interaction between the two is excellent and without latency, and the layout is logical and easy to pick up, with the vast majority of operations being equally simple to perform from the hardware or the software.

Any MPC is at its heart a sample-based pattern sequencer, and you can of course load samples of your own, including samples and sequences from any MPC ever made, so your old patches should work just fine with this new model. Load samples into pads in WAV, AIFF, REX, MP3 or SND formats and use up to eight pad banks, which is more than any MPC to date. The software supports up to 128 tracks and there’s a grid-based sequencer that records your patterns as you play. There’s advanced timing correction available as well as the MPC Swing for which the family is well known, and it’s quick and easy to put patterns together. Patterns can consist of multiple parts and layers, be built into songs using the song sequencer, and eventually exported as MIDI or an audio mixdown if you wish.

In addition to being able to load more or less any sample you throw at it, the MPC software is able to sample natively, too. Enter Sample Record mode either from the hardware or the software and choose to record either from an external source or resample an internal sound. You are then free to edit the sample by selecting parts of a waveform and trimming, chopping or otherwise processing them as required. The Q-Link controls on the hardware are particularly useful in this regard, letting you work in an old-skool but intuitive way. Use the Scroll dial to select a bank of controls and then the computer or LED screen to edit the waveform and save it.

Sampling is just one of the software’s talents, and it is also able to load plug-in instruments into any of its banks. These can be tweaked using their GUI but also have their parameters mapped to the Q-Link controls easily. Flip to the Track Mixer section and you can load not only the bundled effects but any enabled third-party effects as well. As elsewhere, the six Function buttons on the hardware can be used to change parameters, so working with the mix, panning, effect levels and routing is easy. Go into the Program Edit section and all the tweakable parameters of any selected plug-in are available too, mapped helpfully to the hardware controls and screen.

There’s an awful lot to like about the MPC Studio package. The hardware is gorgeous and as well as being supremely portable, is very well laid-out, so beginners as well as MPC-heads will feel at home. The software feels uncluttered while at the same time offering a wide range of features and being user-friendly and covering everything you could need to do, from sampling and editing through programming, sequence and song creation, using effects and mixing. Add to this the much-loved playability and feel of the MPC pads and the fact that it runs as a plug-in as well as a standalone app, and you start to appreciate the level of integration between hardware and software that AKAI has achieved.

We have mentioned the major features but truthfully there’s an awful lot more we haven’t had time to discuss, such as the different pad modes, note repeat and other performance features. This isn’t just a controller, it’s meant to be played like an instrument, as MPCs always were. And in that, it succeeds. It also brings a serious  production element into the equation, with the ability to sample, mix and use plug-ins taking things to the next level. Of course, you could use it as a simple trigger, but that would be missing the bigger picture – that this is a truly capable performance and production tool for the modern mobile musician.

An elegant and powerful performance and production tool that manages to be both enormous fun and suitably serious when required. Sets the standard for mobile music-making.